Like many from our community and across Philadelphia, my 7-year-old son John and I went down to watch Philly’s iconic Independence Day fireworks over the Philadelphia Museum of Art (PMA). The plan was for me to get some good photos of the fireworks while spending a little quality time with my little buddy after working most of our July 4th.

We entered the event area from 25th street, where our Uber dropped us off. We didn’t pass through any security to get into the event area, but I had on my press credentials, so it would have made little difference if we had.

We set up initially just in front of the PMA steps across the street from the crowds, next to the NBC 10 Cameraman. After taking some establishing shots and setting John up with some chalk for him to draw with if he got bored, a Philadelphia Police Officer approached us and asked us to move across the street. He cited his commander’s concerns about the potential for falling debris from the fireworks display.

We all moved across the street on the edge of the area we were told to be in, wanting to push the envelope to ensure we had the best vantage point to photograph the fireworks.

We settled back in to wait for the show to start, taking some crowd shots and various things of interest before the show began.

The people were ready to see the show. They were laid out on the grass, drinks and snacks spread out before them. Kids were running around being kids, sparklers, LED lighted wands, and ice cream abound. It was the kind of night you would hope for on Independence Day in Philadelphia, clear skies, warm but not oppressively hot or humid. I couldn’t have asked for better.

A mother watched her one-year-old and John explore the line of police motorcycles. An officer standing next to his bike offered to let the little girl sit in the seat. He placed her on the bike and took pictures of the little girl with the mom’s phone. 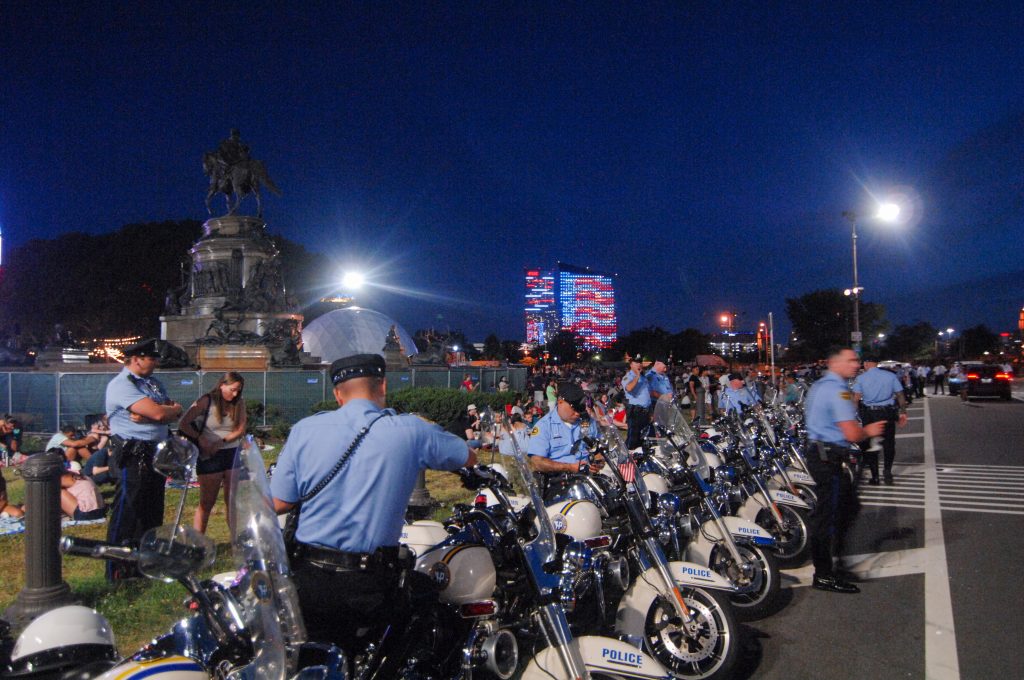 Moments later, at around 9:50 pm, there was some disturbance on the far left side of the “Rocky Steps,” near the street and into the road.

It was pure chaos; officers rushed over from all directions, yelling unintelligibly, and appeared to be man-handling someone next to a police cruiser.

No one in the immediate area heard any gunshots before or after chaos broke out among the police.

Other police officers began searching the bushes and various areas of the steps, clearly not finding who or what they were looking for.

I attempted to capture all of this. It was challenging, the lights from their vehicles were throwing the sensors on my camera out of whack, and I had somehow knocked my settings back into automatic. I managed to capture some of it, but many photos had too much motion blur to be helpful.

It was at this point that I heard someone yell bomb. Given the panic and chaos among the police, I took the threat seriously, grabbed John, and began slowly moving to the right side of the parkway away from the chaos.

I continued taking pictures as we moved cautiously along a line of police motorcycles we used as potential cover in the direction we entered the event area.

The crowd finally began moving as we neared the street on the right side of Eakins Oval.

At this point, an officer approached us and informed us that “two police officers were shot” and that “the gunman was still in the crowd somewhere. You need to get off the parkway.” He didn’t advise us which direction to go, so we continued along our horizontal path as the crowd began running down the parkway toward City Hall in terror.

Later we would find out that there wasn’t a gunman, at least in the sense we’ve all come to think of the term, and they likely weren’t in the crowd gathered on the parkway, either. However, neither of these points of information could have been known at the time of the incident.

Two days later, Chief Inspector Frank Vanore said detectives “really don’t have a clear picture of where the bullets came from.” He said officers stationed around the Parkway and the Philadelphia Museum of Art for the Wawa Welcome America Festival did not hear shots or see muzzle flashes before the officers were hit. 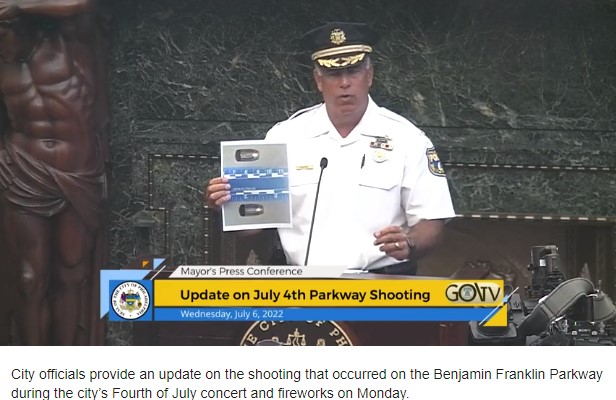 According to police, Philadelphia officer Sergio Diggs and Montgomery County Sheriff’s Deputy John Foster were about 20 feet apart when hit by .40 caliber rounds fired from the same weapon. ­­­­­

During the incident, police thought it could have been a sniper on the roof of one of the many high rises in the downtown area. Later they would change that assessment and assume that the likely culprit was some moron firing a gun into the air in what is sometimes called celebratory gunfire.

The rounds could have been shot up a mile from where the officers were hit. “A .40 caliber round fired straight into the air unimpeded, can travel more than a mile, about 22 hundred yards,” said Chief Inspector Vanore.

Word of the incident still hadn’t reached people on the periphery of the event area. People were still milling about or walking toward the area that had just been cleared. 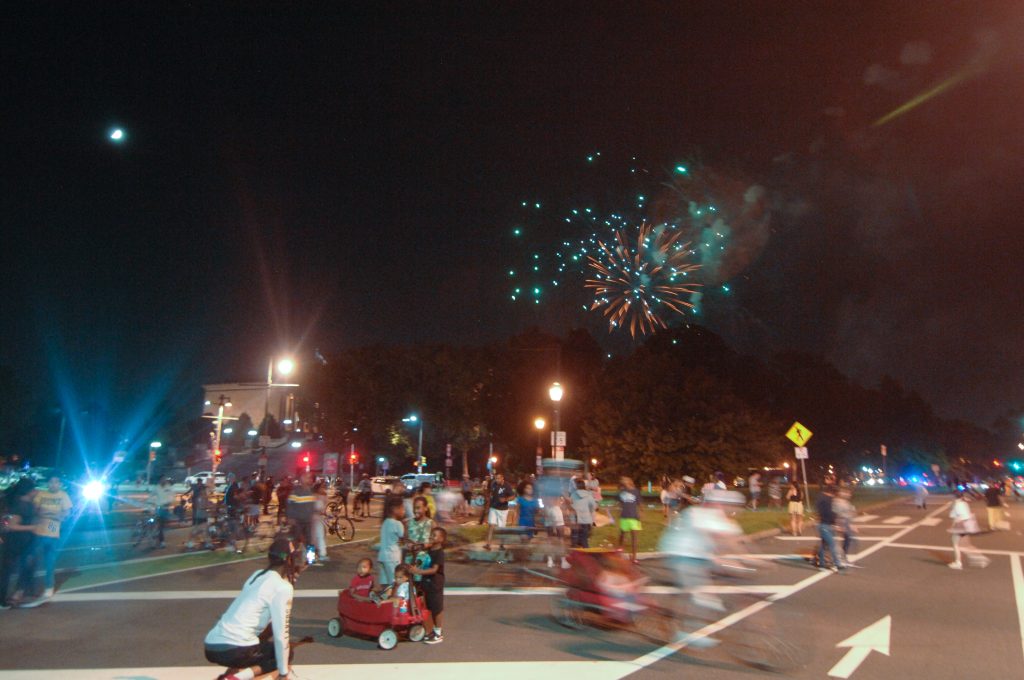 One man was taking pictures of his kids in a red wagon heading to the area where people had been sitting moments before, utterly oblivious to the chaos around him, until two police officers on bikes rode by and yelled at him to leave the parkway, without explanation.

The first fireworks exploded over the PMA, followed by several more as people stopped and turned to watch. Like some possessed mob or a Borg Collective (You’re welcome for the Star Trek, reference), they craned their heads as one.

John and I continued to the right side of the event area. We left the parkway, crossing a line of knocked-over bike rack police barriers. A group of bike cops told us we were fine on Pennsylvania Ave, so another news crew and I set up shop to try and get more images.

From our vantage point on Pennsylvania Ave, we watched as crowds continued to stampede toward City Hall, followed by sporadic bike cops in a half-assed line, yelling at them to “get off the parkway,” and that there was “a shooter in the crowd” and “two people were shot.”

Police continued to secure the scene where the two police officers were wounded. Officers were beating every bush and peering into every shadow where someone could be hiding while fireworks continued to go off over their heads.

When we finally left the area, we walked 24th and Fairmount Ave and waited outside The Bishop’s Collar for more than an hour for an Uber home. Police continued to fly past us on Fairmount Ave the entire time we were waiting. 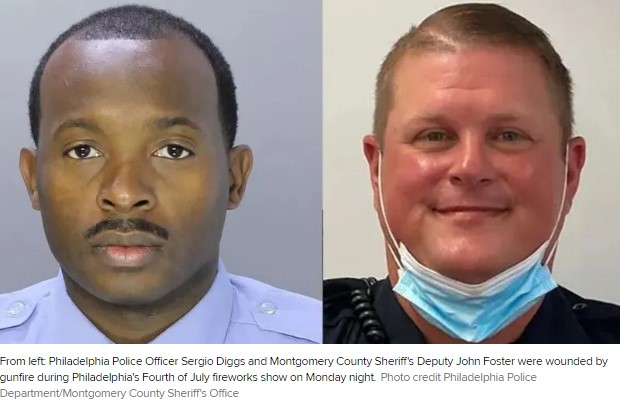 Both officers were taken to the hospital and later released with minor injuries. Police are offering a 42,500 dollar reward for information leading to an arrest of the shooter.

About Cory Clark 47 Articles
Cory Clark is a Photojournalist and writer focused on Human Rights and other social issues. His work can be found in hundreds of media outlets from Philly Magazine to Fortune. He has been a long time freelancer for Getty Images, The Associated Press, and Association French Presse. Cory, his wife, and son are residents of East Germantown.

Do we want freedom or a false sense of security? [more…]