WASHINGTON, D.C. – Early in the morning on June 18, 2022, thousands of protesters gathered at Freedom Plaza to march down Pennsylvania Ave to be joined by more than 150 thousand poor and low-wage workers from across the country for a rally calling on the nation to embark on a “Moral Revival.” Speakers and protesters from diverse backgrounds unified by their economic status as poor and low-wage workers or their advocacy for those suffering from economic marginalization called on the nation and its leaders to prioritize the needs of people facing the economic and social turmoil of poverty.

Looking out over the crowd, you couldn’t see where it ended. The sea of people and causes stretched for blocks, a cacophony of people fighting back on the human suffering caused by the policy choices of those who are supposed to lead us.

Standing in it, you can become overwhelmed by the frustration people are feeling, but this is tempered by the sheer will to hope that everyone there is holding onto for dear life. They know that to succumb to despair means spiritual death at a minimum, if not literal death.

“Many of the people you see here know the pain and death of poverty. We must, over and over again, have a moral meeting in these streets. We are not unlike our forerunners, those who stood for abolition, those who stood for labor rights, they stood for civil rights and women’s rights, LGBTQ rights and the rights for women to control their bodies… and those who have demanded just immigration policies in a nation of immigrants,” Rev. Bishop Barber 2nd, co-chair of the Poor People’s Campaign. “All these people have come to these streets to openly expose the moral crises throughout our history. This sacred procession has been required at various points in our history to exercise the demons of greed, hate, and racism from our society.”

Speakers called on leaders to address a broad swath of issues ranging from abortion, family leave, and wages to gun reform, Medicare for All, and mental health care. The throughline throughout the day and across issues is that they disproportionately affected poor and marginalized people.

At the heart of the demands was the call for President Biden to hold a poverty summit at the White House so that he and his administration could hear directly from poor and marginalized people about the conditions they face in their day-to-day lives, their needs, and possible solutions.

In previous rallies, Rev. Barber has called out political leaders as abusive and the status quo as abuse, pointing out the various ways in which poor and marginalized people are subjected to unnecessary suffering and then gaslighted, often before they even have the wherewithal to question the narratives being disseminated from the ivory towers of economic and political power.

This rally is about shifting the narratives, “ We’re not an insurrection, but we are a resurrection,” says Rev. Barber. “We are walking in the footsteps of our forebears, in the footsteps of giants, but we are carrying their work forward, understanding that the regressive policies that have led to 140 million poor and low-wealth people aren’t benign. They’re policy murder for the sake of a greedy few.” 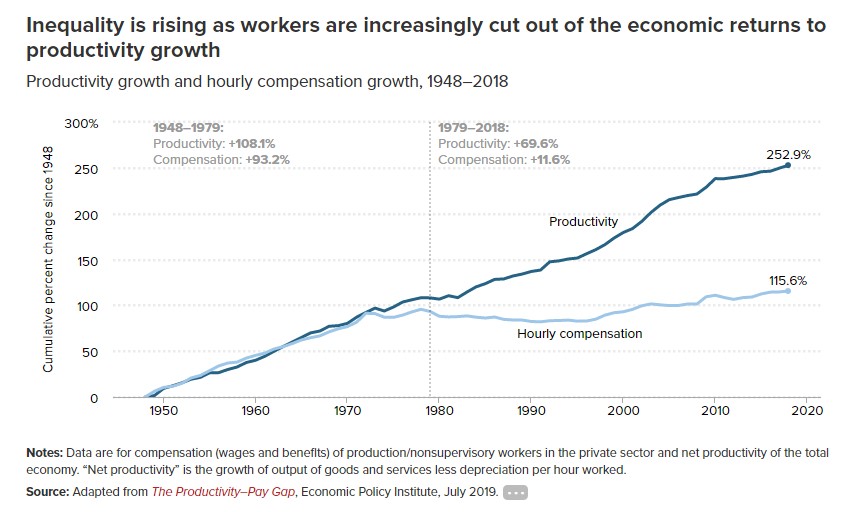 Even before the pandemic, 700 people died from poverty and economic inequality a day, and there hasn’t been any respite for those suffering at the bottom of the economic ladder. Poor people died twice the national average during the pandemic, leading to more than 300 thousand unnecessary deaths simply because people couldn’t afford health care.

“A full third of the people who did not have health care would not have died if they had health care during the pandemic,” Rev. Liz Theoharis, co-chair of the Poor People’s Campaign and Director of the Kairos Center. “Healthcare must be connected to the person, not dependent on having a job.”

“These were policy choices, policy murder, and abuse,” said Rev. Barber. “And we will not be silent anymore.”

The United States will spend an average of 778 billion annually on the military budget. The majority of that spending will go to corporate contracts. In the fiscal year 2021 alone, contractors raked in 422 billion, making an average of 18 million for the top twenty CEOs. Congress always has enough money to spend on wars to kill poor people, with little debate except around the margins. Still, every time people ask for the merest of crumbs for things like healthcare, food for our children, housing for our families, or higher wages for the work we do creating wealth for this nation. 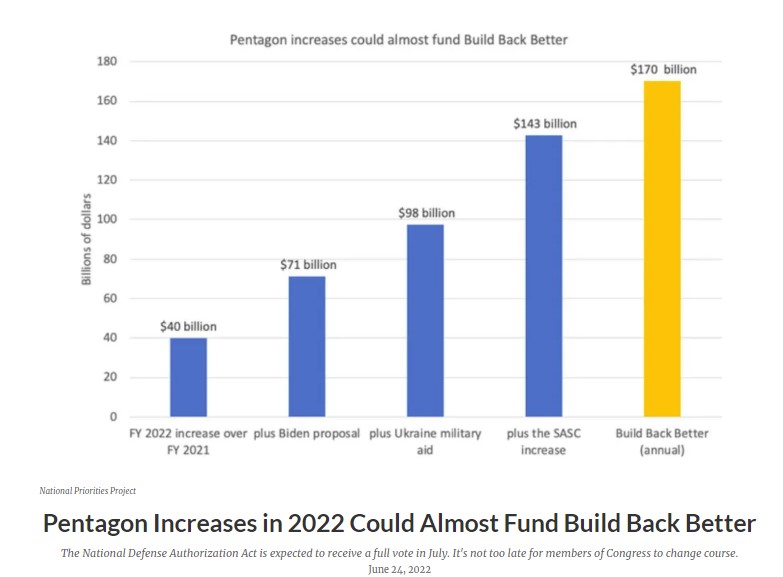 Compare this to the 170 billion per year that was in the Build Back Better Act, which would have provided 39 million families with continued enhanced Child Tax Credit payments, 18 million workers with family leave, 17 million low-wage workers with expanded Earned Income Tax Credit, Universal Pre-K, expanded Medicaid for uninsured workers and 800,000 disabled and older people who need home health care.

The choice is clear, we can keep choosing death and destruction at home and abroad, or we can choose life and hope for a brighter future for our children. The right-wing media and their wealthy Sith lords want us to believe that the problems of inflation and high gas prices are somehow our fault. Yet, they never once mention the more 2 trillion siphoned out of our pockets over the last few years and into the coffers of the wealthiest people in the world. They ignore the billions in profits made by the oil and gas companies or that CEOs, on average, make 351 times the average worker, growing more than 940 percent since 1978. They ignore that inflation is a global problem, with many other countries faring far worse than the United States. They do all of this because they are gaslighting us so that they can justify their graft and our suffering.

“When the prophet Micah and Isaiah said God’s people beat their swords into a plowshare, that’s the people taking power into their own hands. They didn’t wait for change to come from the top down,” said Shane Claiborne, she’s the co-founder of the Red-Letter Christians and a fierce human rights advocate. “I think that’s what’s happening right now in America, water boils from the bottom up, and right now we’re boiling over with the need for real change that addresses the issues our communities are facing like gun violence, food deserts, housing insecurity, healthcare, and so many other things.”

“This movement is about dismantling systemic injustice. It’s about tackling all of the interlocking gun violence, food deserts, and housing insecurity that entrench poverty, pain, and trauma in our communities, that trap people in a vicious cycle of victimization and victimizer, said Elijah Anthony, a seminary student. He works with unhoused residents of Boston. “We have to tackle all of this together.” (Referring to the country and each issue.)

“Marching is not just for a moment, but for a movement. Not just preaching to the choir, but expanding the choir,” says Rev. Andrew Wilkes, pastor of the Double Love Experience in Brooklyn, New York, “and building the kind of density that can exercise pressure in the fall, so that when people take office in January, they know we don’t only want to take pictures: We want to see the poetry of the campaign become the prose of law.”

“It’s time for these politicians to put up or shut up and get out of the way,” said Jazmyn Henderson of ACTUP Philly.

Throughout the day, I keep coming back to something Pam Africa told me back when I was still a wet behind the ears thirty-something, “no one is going to come and save us. We have to save ourselves.” If you want to fight for our community and to end the unnecessary suffering we’re all faced with due to bad policy choices, here’s how to get involved.

Make sure you are registered and vote via Rock the Vote

About Cory Clark 37 Articles
Cory Clark is a Photojournalist and writer focused on Human Rights and other social issues. His work can be found in hundreds of media outlets from Philly Magazine to Fortune. He has been a long time freelancer for Getty Images, The Associated Press, and Association French Presse. Cory, his wife, and son are residents of East Germantown.

May Day 2022 Celebrates Recent Labor’s Wins, Prepares for Fight Ahead

PHILADELPHIA – on May 1, 2022, Multiple groups of labor, immigration, and other social justice activist gathered at various points in Center City before meeting up at Independence Mall and marching down South street to [more…]