The long-awaited playspace at McMichael Park moves forward, while funding for the park takes a step back 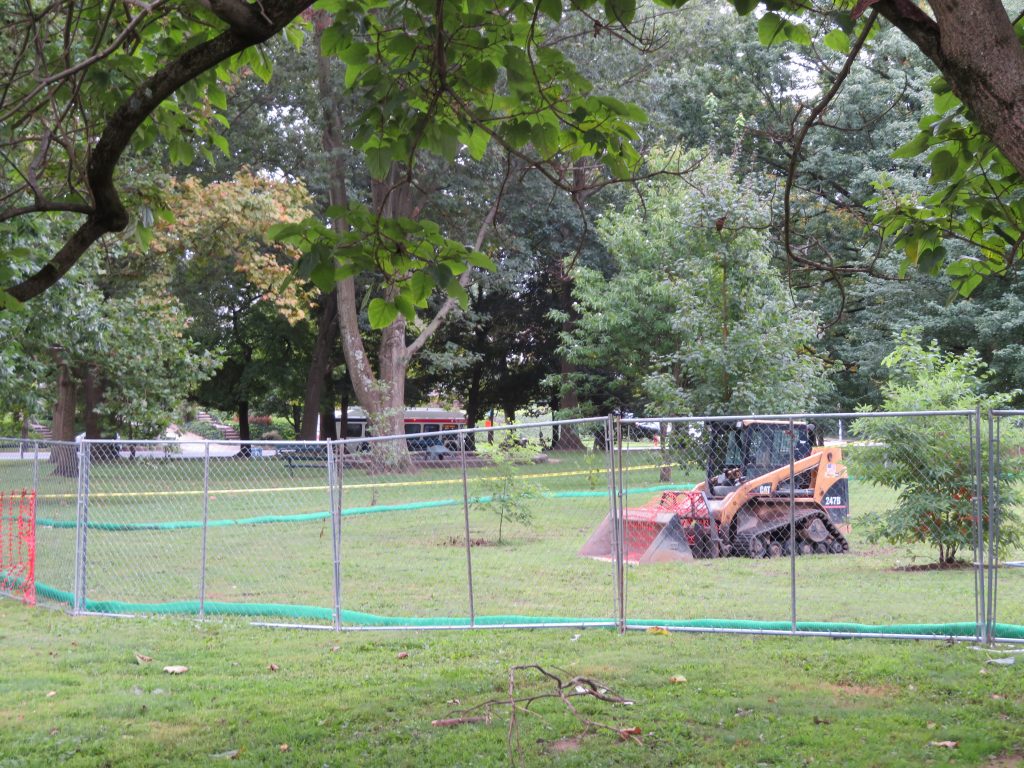 First the good news – a long-awaited playspace finally broke ground this month. It’s taken more than a decade of community meetings (plus a few bucks from Councilman Curtis Jones and a determined push by Park Commissioner Katherine Ott-Lovell) to bring the project to life. A few hundred kids from the Falls (and neighboring communities) will finally have a shaded, green place to play.

The fencing and heavy machinery marks the start of the “North Pod” (Phase 1) of the playspace, which will be complemented by a South Pod in the near future. Both will be created from “non traditional” elements, such as logs, boulders, and berms. Such a design will blend well with the park’s rustic features while helping foster native ecology, manage stormwater and increase biodiversity. Altogether a pretty sweet deal for the young folks and the community.

What about the bad news? Yes, of course it’s COVID again. It’s done a pretty good job shredding the city’s finances, taking a big 20% bite out of the Parks and Rec budget. Commissioner Ott-Lovell has told the Friends groups who help protect city parks they’ll need to pitch in more than ever to keep their greenspaces thriving. Word on the street is that grass cutting is one of the first services to go. That’s right, parks all over the city are about to get shaggier.

The good news about the bad news? It’ll be the chance for all the neighbors who’ve pushed for the playspace to pitch in to help maintain McMichael! Or as Commissioner Ott-Lovell put at this year’s meeting:

“…this doesn’t end when the ribbon is cut. Your commitment to get this thing built – to everyone who is not currently an active and dues-paying member of the Friends of McMichael… batter up!

Amen! Keep an eye out for updates as the playspace comes together.

Meanwhile, to pitch in as a volunteer, visit mcmichaelplayspace.org or mcmichaelparkturtlefriends.com. All hands welcome!

William R.
What’s going on in McMichael Park?
Christina KS
Activate McMichael (mcmichaelplayspace.org)
Joe J.
Positive neighborhood change
Leslie N.
Sad that the park is changing. Some things do not need to be ‘fixed’.
William R.
Change should be managed. But the world moves on
Joe J.
Not a “fix” but definitely an “enhancement”
Sheila D.
ANOTHER PLACE FOR PEOPLE TO DESTROY INSTEAD OF THE BEAUTY OF THE FIELD ☹️
William R.
I disagree
Sheila D.
HAVE YOU LIVED HERE LONG?
William R.
Yes. Over half of my life. And I visited EF often in my childhood
Sheila D.
ALL MY LIFE IN EAST FALLS BORN AND RAISED
William R.
What street?
Sheila D.
FROM ABBOTSFORD ,WHIELE ST., TO CALUMET ST.,THEN TO WHERE I AM NOW IN EAST FALLS NOW WITH MY FAMILY I KNOW MOST OF THE PEOPLE HERE STILL
William R.
I never ran across you on Calumet. I lived on Stanton for years. Mary McGarvey’s old house
Sheila D.
UP OR LOWER?
William R.
I usually stay on Lower
Sheila D.
DID YOU KNOW THE SPINOS? HANG OUT AT GREEN CORNOR( I DIDN’T BUT KNEW PEOPLE WHO DID)
William R.
I knew Acey. I never heard of Green Corner. Where was that? That wasn’t Roque Petrone’s place, was it?
William R.
Something tells me that your memory goes back much further than mine does
Sheila D.
MARK ,FRAN, ACEY . GREEN CORNOR WAS ON INDIAN QUEEN LANE OVER THE TRACKS (WHITE BLDG. – STORE ON RIGHT) KNEW THE TAYLORS, RUSH,WAKEFIELDS, I CAN GO ON BUT I’LL STOP THERE – WAIT – YOU MIGHT KNOW LUCKY WHO OWNED THE FLOWER SHOP ON MIDVALE AVE. ACROSS FROM THE FUNERAL HOME ✌🏼OUT
Sheila D.
OH YES FONDLY
William R.
Lupinacci?
Sheila D.
YES – MY FARTHER DENNIS LANE SR. HELP MAKE ARRANGEMENTS THERE
Lucy D.
It’s going to look so nice! First time seeing the future layout!
Liz M.
Parkway move.
Bill G.
Is that going 2b the new homeless encampment.
John H.
Can’t wait to take my daughter there.
Gerard P.
The play space is finally being built.
Suzanne C.
Hi… is this the new play space?
William R.
Evidently
Suzanne C.
ty…. didn’t think the play space was going into that area.
William R.
The wheels grind slowly

Mom could use a little help [more…]

2/27 Theft 5900 Wissahickon Ave. Complainant parked her white 2015 Range Rover to walk the trail. When she returned, she saw that her trunk window with an unknown object. Compl’s rear windows were also cracked. [more…]

Pics from Christmas Past [more…]