Sean Moir and Valentyna “Vallia” Levytsky were married in Ukraine last summer, and returned this January to celebrate Orthodox Christmas with her family. When their visit ended, Sean went back home to Philly while Vallia stayed behind to look after her mother, who was in the final stages of Parkinson’s disease. At the time, they were not especially feeling any clear and present danger of Russian attack.

Neither were most Ukrainians. Until, of course, Putin’s invasion began February 24, bringing global socio-economic chaos along with real-life devastation. Little did we know here in East Falls how close this crisis was looming.

Sean and Vallia live in our condo complex, where we see them around quite regularly. Pre-COVID, we’d run into them at community meetings and Wissahickon Brewing Company (which is right nextdoor). We share an interest in local history, and follow each other on Facebook and stuff but still — it was such a shock to learn of Vallia’s imminent danger in Ukraine.

My wife, Vallia Levytsky, is currently in the besieged capital of Kyiv, Ukraine.

She is tending to her very sick mother, with late stage Parkinson’s Disease, to the sound of air raid sirens, explosions, and machine gun fire outside her window.

I wish I was exaggerating.

So far she’s managed to stay out of harm’s way, and we’ve been able to talk daily about the war, her mom, and happier days that are sure to come back home in Philadelphia.

Pray for this war to end soon.

The day after, Sean’s next update hit like a gut-punch, along with terrifying reports of Russian military, closing in… 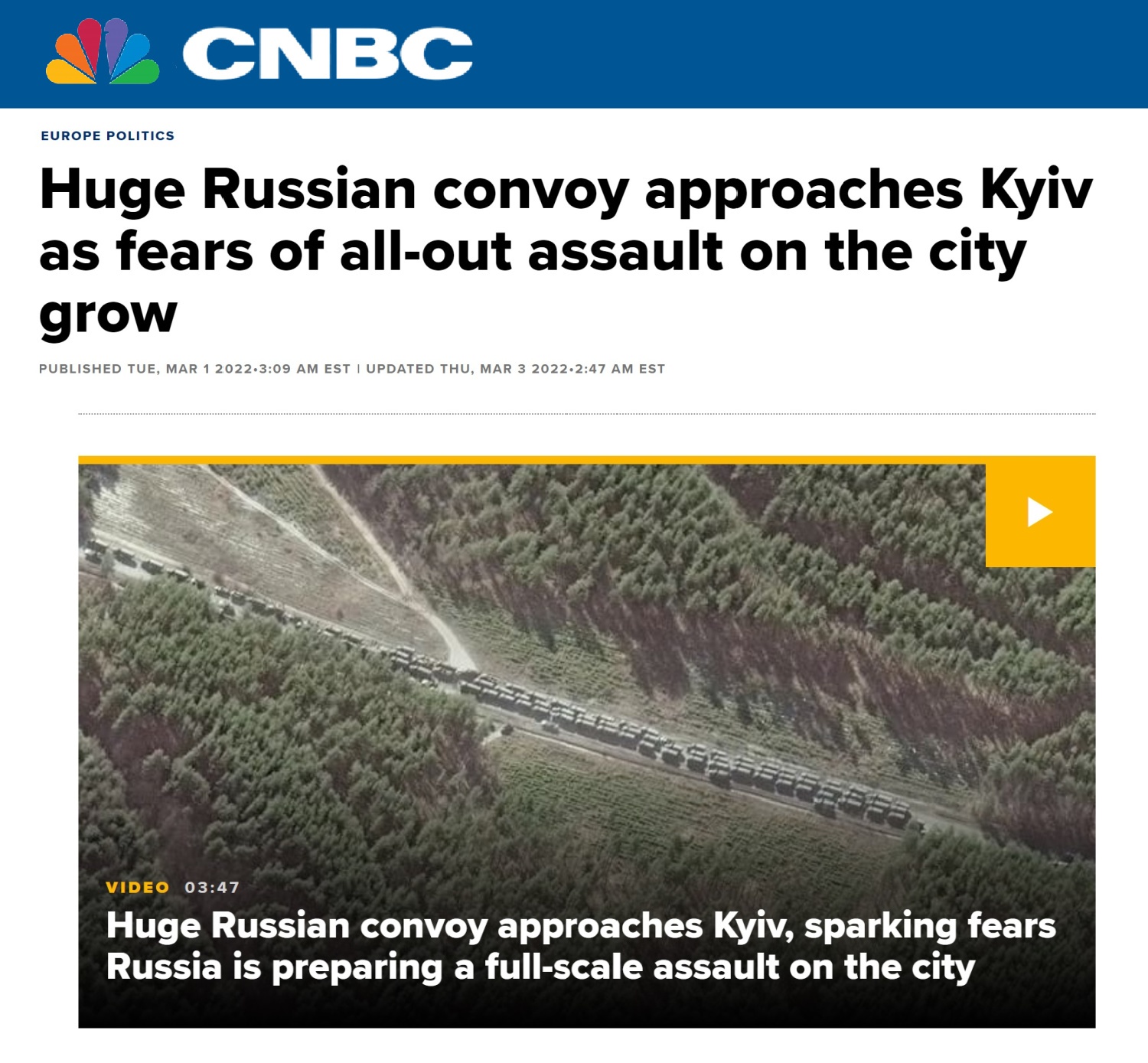 The screenshot Sean shared was kind of uplifting: a selfie from Vallia in a cafe — her blue eyes twinkling — as she declared “You can still have coffee in Kyiv!!”

Fun, right? Except for a giant column of Russian troops approaching Kyiv. And just like that: a war that’s 4,700+ miles away feels painfully close and urgent. And there’s that maddening feeling of wanting to help, but not knowing how. Of all the unpleasant emotions humans get to experience, powerlessness is one of the most frustrating.

One way to take power back, we’ve found, is by speaking out about what’s going on. With this in mind, we used our N.I.C.E. connections to put Sean in touch with BillyPenn’s Jordan Levy, a kind and capable reporter who helped the couple tell this very personal story in ways that have resonated throughout the city, and beyond. 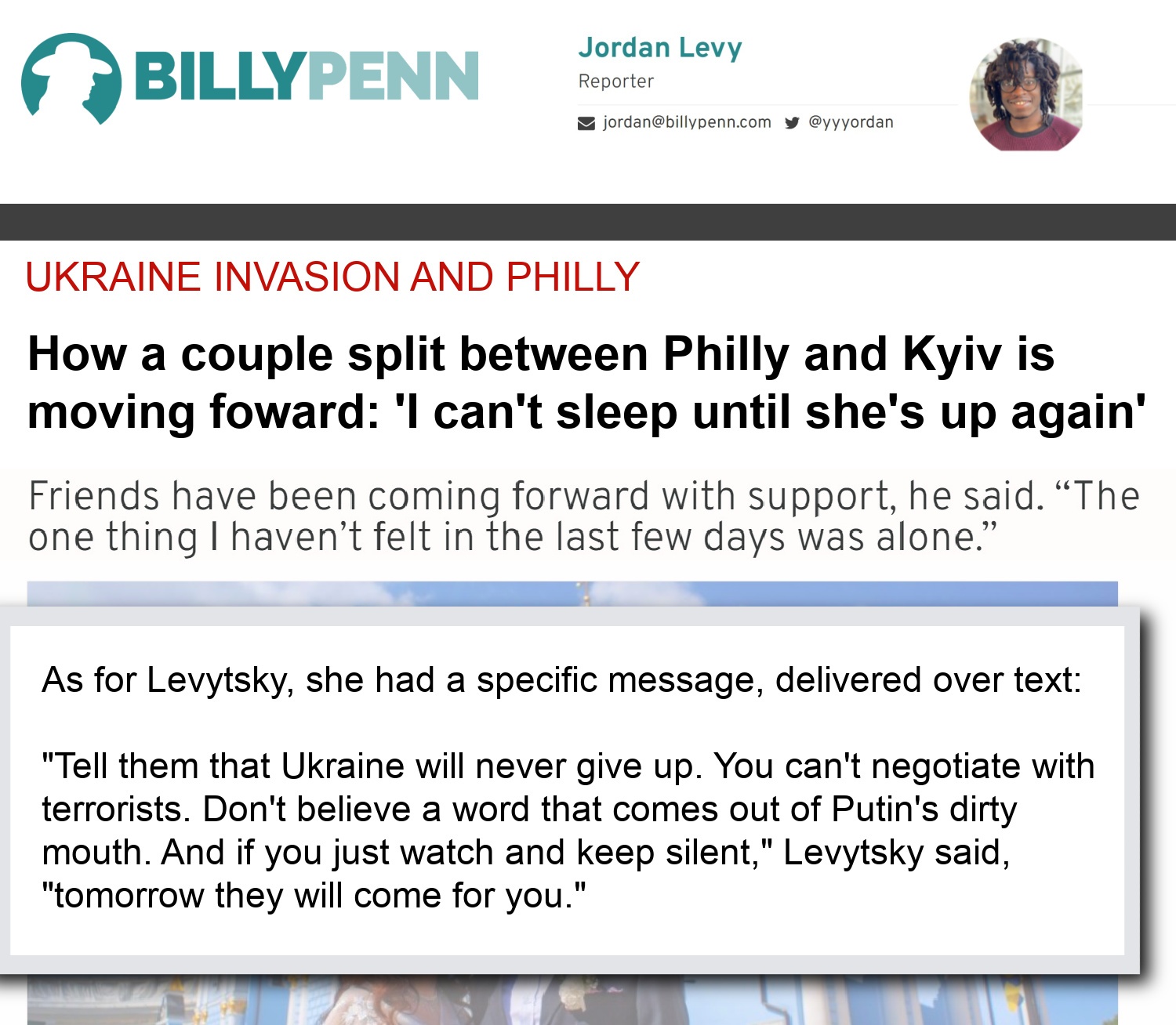 A veritable community sprung up to support them: friends, neighbors, old high school chums, and others sending thoughts, prayers and even donations for refugee food rations. Although Vallia was committed to staying put for her mother’s comfort, as the fighting intensified, a stern warning ushered forth from her brother’s wife in Lviv: Get out now!

By March 3rd, the family had mapped out a 200-mile route by car, and Vallia left Kyiv with her mother and cat for a 15-hour drive to “relative safety” in western Ukraine. Sean tracked their tentative progress via gps as they detoured around tanks and roadblocks.

Soon after, Vallia’s mother passed away, bringing a heartbreaking moment of closure amidst the open wound of war. She was laid to rest in a family churchyard, where Sean told Fox29 that “it was difficult to find men to dig the grave, because they were all preparing to defend the country.” 😥

With millions of Ukrainians fleeing the country (and airspace obviously closed to civilian traffic), Vallia arranged her flight home from Poland. After a 10-hour delay at the border, she was on her way to Warsaw for her 9-hour+ flight back to the States.

Finally! On a cold Thursday night — as the invasion on Ukraine raged into Day 15 — her plane touched down in Newark. Sean greeted her with a beautiful bouquet, featuring sunflowers of course! Friends and neighbors decorated their front door while well-wishers from all corners of social media celebrated her safe return.

“We can’t change what has happened, but we are good for a few smiles and laughs when you’re ready,” wrote Trish Metzner, East Falls favorite artist and community cheerleader. You can bet there’ll be some Welcome Home partying in the near future!

She got out just in time. Vallia’s journey is over, but the fight is just beginning. Help support the war effort! Local fundraisers are getting overwhelmed with donations, so instead, send money through UNICEF, who is organizing to provide civilians with access to basic services: water, sanitation, healthcare, emergency assistance, and much more.

You can also support independent English-language journalism in Ukraine: subscribe or donate to The Kyiv Independent, a trusted source for news and an important antidote to the fear and disinformation seeking to undermine confidence in Zelensky’s resistance, and spread suspicion of the West.

Speaking of truth, take some time to learn the complicated history of the Ukraine-Russia conflict, which goes back to Ukraine’s struggle for independence after the collapse of the Soviet Union. The ties between the two countries, though, stretch back centuries — Kyiv is sometimes referred to as “the mother of Russian cities”. A 2001 census found that Ukraine was home to about 8 million ethnic Russians, many of whom now identify as Ukrainians.

Russians have been laying stake to Ukraine since the early days of the USSR, when Joseph Stalin’s attempts to collectivize the country’s abundantly productive farms to feed Communist higher-ups and fund industrialization projects. When the Ukrainians resisted, he stole their food and caused the mass starvation of 3.9 million people from 1931 to 1934 — a genocidal act known in Ukraine as “Holodomor” (hunger + extermination).

This horrific tragedy has left scars through generations of Ukrainians, and remains a politicized topic in Russia today, where Holodomor deniers are a thing. When Putin says that Russia and Ukraine share a deep common history, he’s right but he’s an idiot if he thinks this is any reason to invade. In fact, it’s the greatest argument for Ukrainian independence we’ve heard.

Ukraine’s glory hasn’t perished, nor her freedom
Upon us, fellow compatriots, fate shall smile once more
Our enemies will vanish, like dew in the morning sun,
And we too shall rule, brothers, in a free land of our own.

We’ll lay down our souls and bodies to attain our freedom
And we’ll show that we, brothers, are of the Kozak nation.

We’ll stand together for freedom, from the Sian to the Don,
We will not allow others to rule our motherland.
The Black Sea will smile and grandfather Dnipro will rejoice,
For in our own Ukraine fortune shall flourish again.

Our persistence and our sincere toils will be rewarded,
And freedom’s song will resound throughout all of Ukraine.
Echoing off the Carpathians, and rumbling across the steppes,
Ukraine’s fame and glory will be known among all nations.

Special thanks to Sean Moir for sharing his Facebook posts and images.

PS More videos! In this first one, CBS Philly sits down with the couple in their East Falls home with Vallia soon after being reunited with Sean here in the States — broadcast on Saturday March 12:

A few days later, Fox29 came back out to speak with Sean & Vallia to recount her harrowing flight from Ukraine and her continued efforts to help friends and family who remain in her homeland, under attack. Speaking of — Vallia is in a unique position to be able to send funds directly to displaced Ukrainians that she personally knows, in desperate need for groceries and medicine.

Please consider donating via venmo @markiyana  So far they’ve raised over $1,000 that’s already been distributed to refugees sheltering in a school in Lviv.

Bikes Are People Too

Drivers — please wake up: this isn’t a video game. [more…]