In February, I attended a quilt show in Camden. While closely examining and admiring each colorful, handstitched quilt, another visitor told me that she wishes she’d kept a quilt from her grandmother. The woman appeared to be close to my age – 71 – so I did a quick, silent calculation to determine that her grandmother’s life span could have matched my grandmother’s, that is, from the late 19th century to the mid-1900. When, then, might her grandmother have made the quilt she now longs for? More importantly, why doesn’t she have it any more? Was it worn out from use or unworthy of special attention and care?

I won’t ever know, but from my study of women’s history, I do know that women’s work, particularly within a domestic sphere, which included quilt-making, was not valued for its aesthetic quality and certainly not for its potential monetary value. In fact, quilters themselves often did not view their handwork as anything more than utilitarian or necessary. For women with more leisured lives, quilts were decorative or commemorative, celebrated births or mourned loss – to be seen, not slept under.

I wanted to know more about the value quilts hold in and of themselves and for their makers. Are they to be used or simply admired? Do they become a gift and, possibly, an heirloom? As it turned out, I had the best possible resource for answers to my questions among clients of SOWN, the Supportive Older Women’s Network.

I popped into a telephone support group – a lifeline for many clients – to ask who among the participants are quilters and who owns a quilt from a predecessor – her mother, grandmother, godmother, or someone of an earlier generation? What did making or owning that quilt mean?

Mary Avant, a long-time SOWN client, is 86 years old. She began to lose her sight in her 20s. However, when she took a quilting class at the Philadelphia Museum of Art, she remembered colors well enough to piece a quilt top of yellow, blue, red, and white. She worked the quilt, sized for a single bed, in her lap rather than on a frame. Her strongest response to the three-week course was that it was “very, very, very calming.” If someone wanted her attention while she was sewing, the person would have to touch her arm. She was so engrossed in the work, she wouldn’t even hear her name.

Ora Bunn was number 10 of 12 siblings in a household in rural Georgia that included 4 cousins. Ora is 80 now and descends from a line of quilters including her great-grandmother, her grandmother, her mother, her paternal aunt, and, then, herself. Her mother was the seamstress for the family and used scraps from her sewing as pieces for her quilts. Her sisters visiting from Augusta also brought scraps of material for Leora to piece together.

Ora learned quilting at home. She described a vivid scene of sitting around a portable frame at night with her sisters and girl cousins – no boys joined the bee – listening to the radio or crank record player, and eating sweet potato biscuits. They knew they “better not get any crumb on that quilt.”

Quilts and quilting followed Ora after she left home. She had graduated from college but knew there were no jobs for a Black woman in rural Georgia. Her mother made a quilt for every child as they left the nest and, sixty years later, Ora still has hers. Ora continued to quilt when she was newly married, through her first pregnancy and her daughter’s infancy. After that, she “didn’t have time.” Ora had joined a quilting group at the Southwest Senior Center that was forced to disband due to COVID-19 measures.

SOWN has its own quilt history. It was founded in 1984. In honor of its 20th birthday, employee-at-the-time, June Siegel, suggested, engineered, and brought to fruition SOWN’s anniversary quilt. 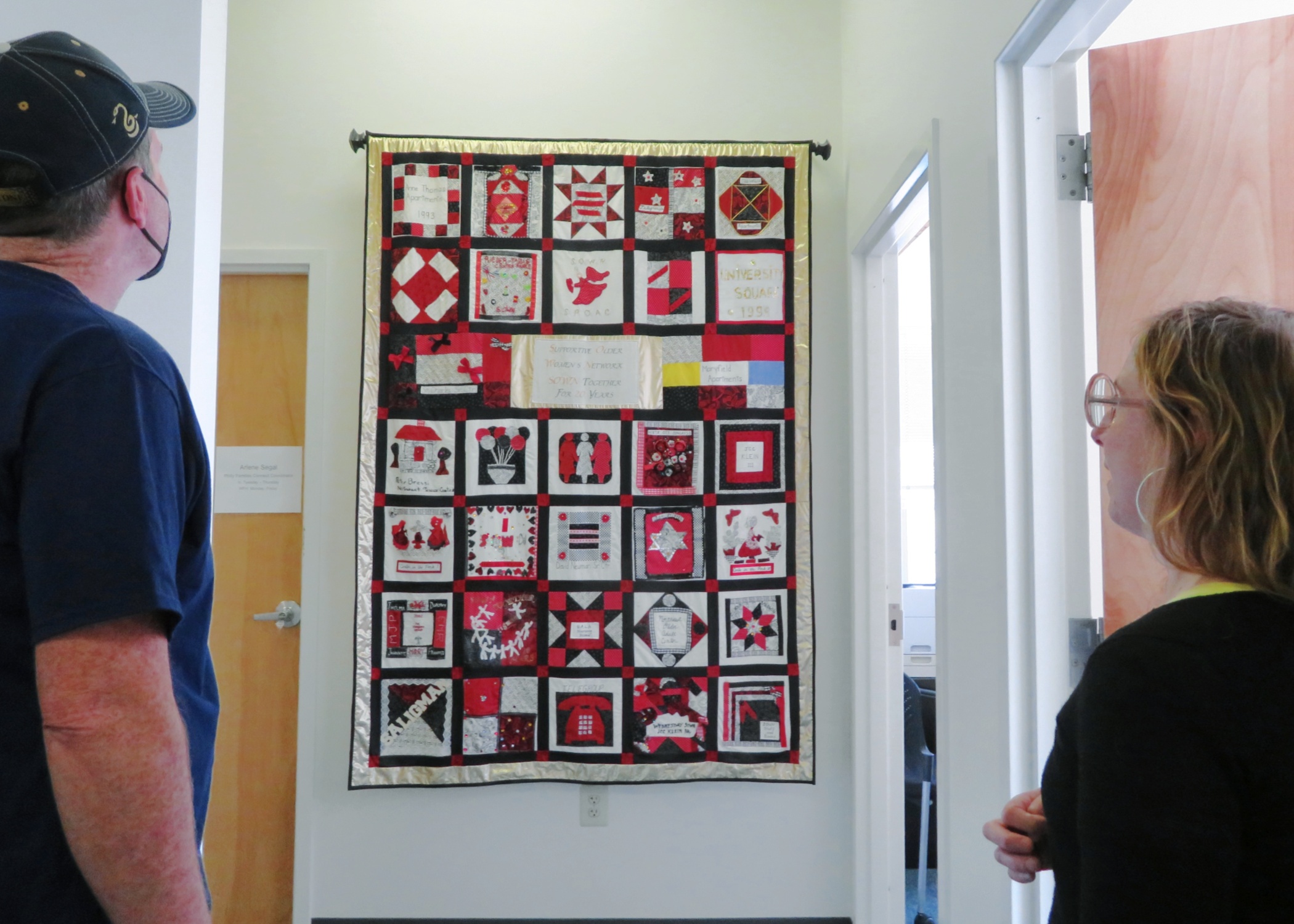 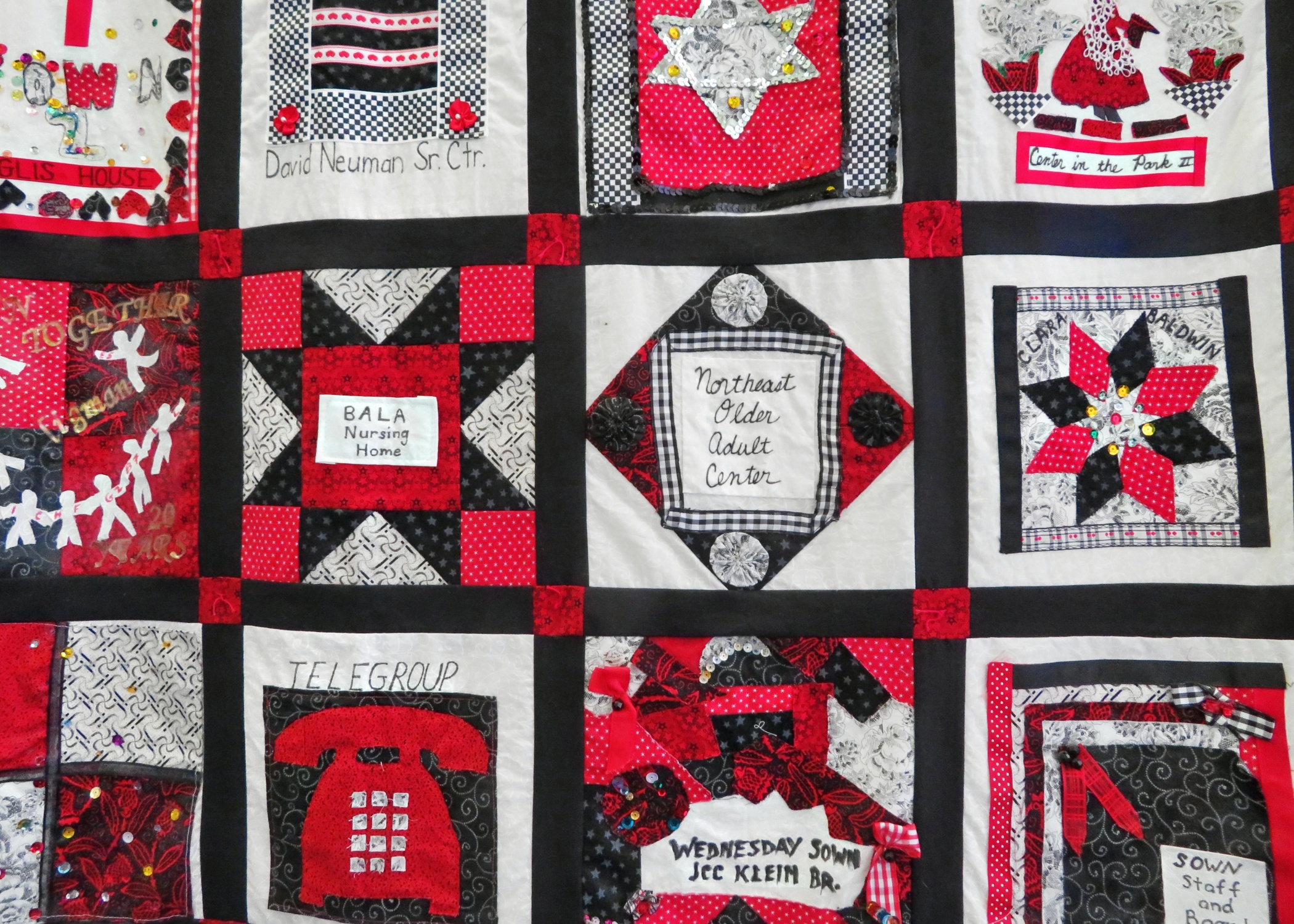 Using SOWN’s colors – red, black, white – to guide the choice of fabrics, June and other employees at the time collected material in solid colors, floral prints, geometric designs, and glitter! to distribute to participating clients in senior centers around the city. The result was – and still is – an impressive creation that hangs in SOWN’s Manayunk offices.

The size of each block was predetermined, but why let a few inches impinge upon imagination? The quilt makers were given free rein to decorate their square as they wished. The results were as varied as the quilters themselves. Squares were slap dash and precise; symbolic and realistic; illustrated by a telephone, a Star of David, a circle of women holding hands, and hand-crocheted stars; and embellished with sequins . . . lots of sequins.

Professional quilter/quilt teacher, Sarah Bond, was called in to make a whole out of many pieces. Once finished, June and other SOWN staff took the striking quilt on the road. For nearly a year, they took the quilt throughout the city to every senior center that had contributed a block.

It’s been almost 15 years since SOWN’s 20th anniversary quilt was completed, but I’ve got another question for SOWN quilters: Which was more fun, making it or seeing it? I’m eager to know the answer.

About the Author
Jill Gates Smith is the Outreach/Administrative Coordinator for SOWN (Supportive Older Women’s Network). SOWN provides community-based services and information to generations of older Philadelphian women and is a grassroots news partner with WHYY/N.I.C.E. 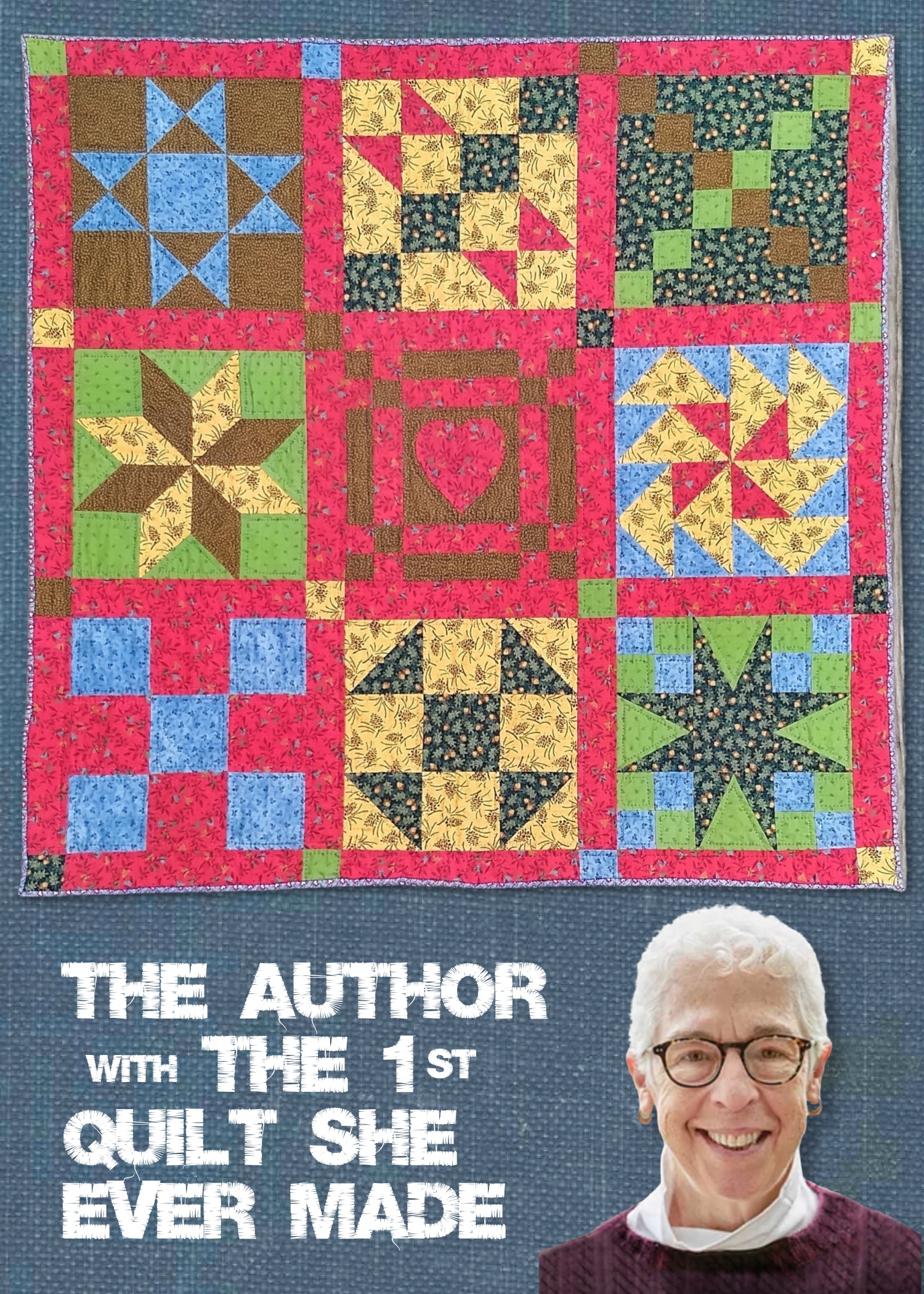 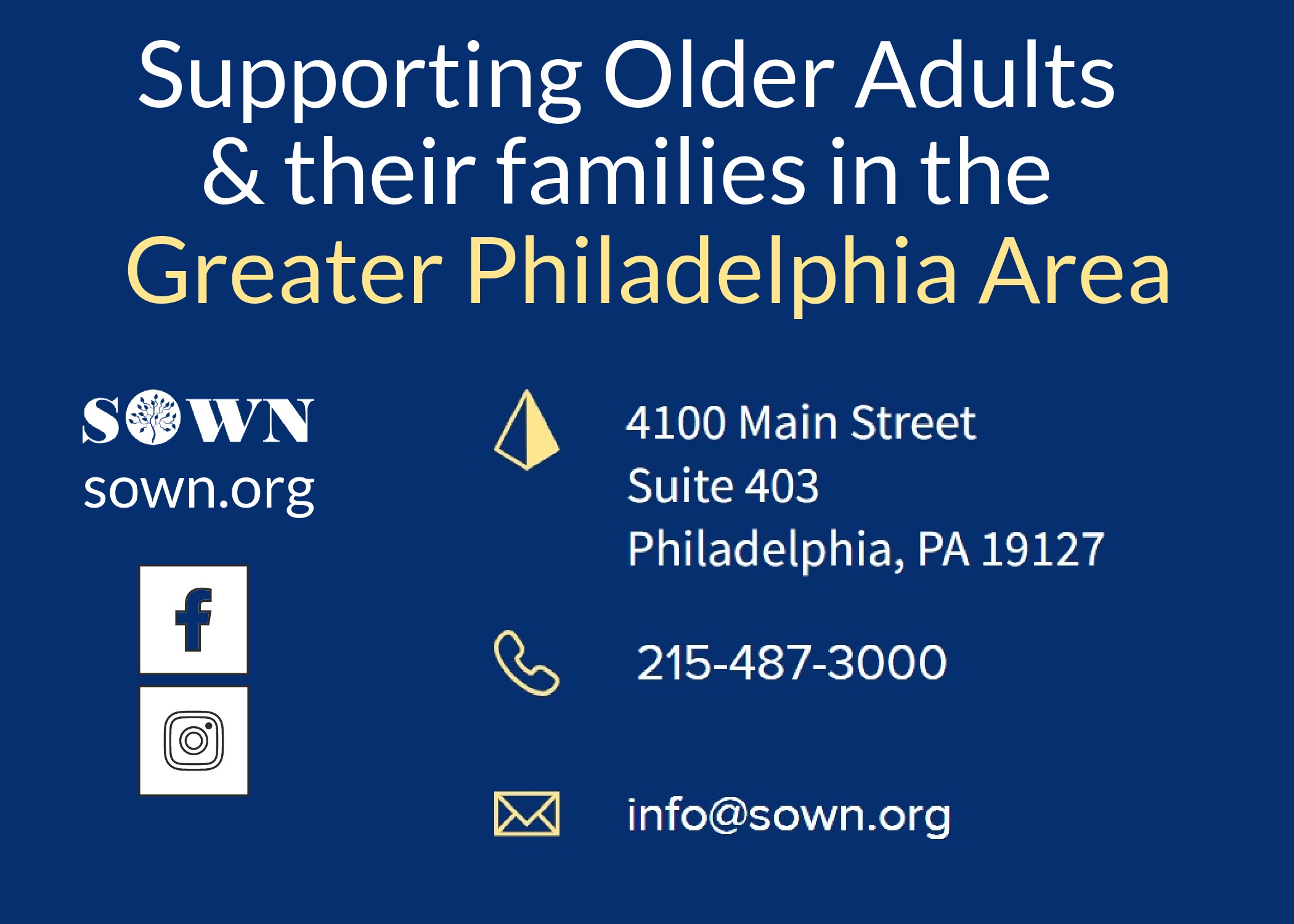