An intro to the natural wonders in our own backyard (spring edition). 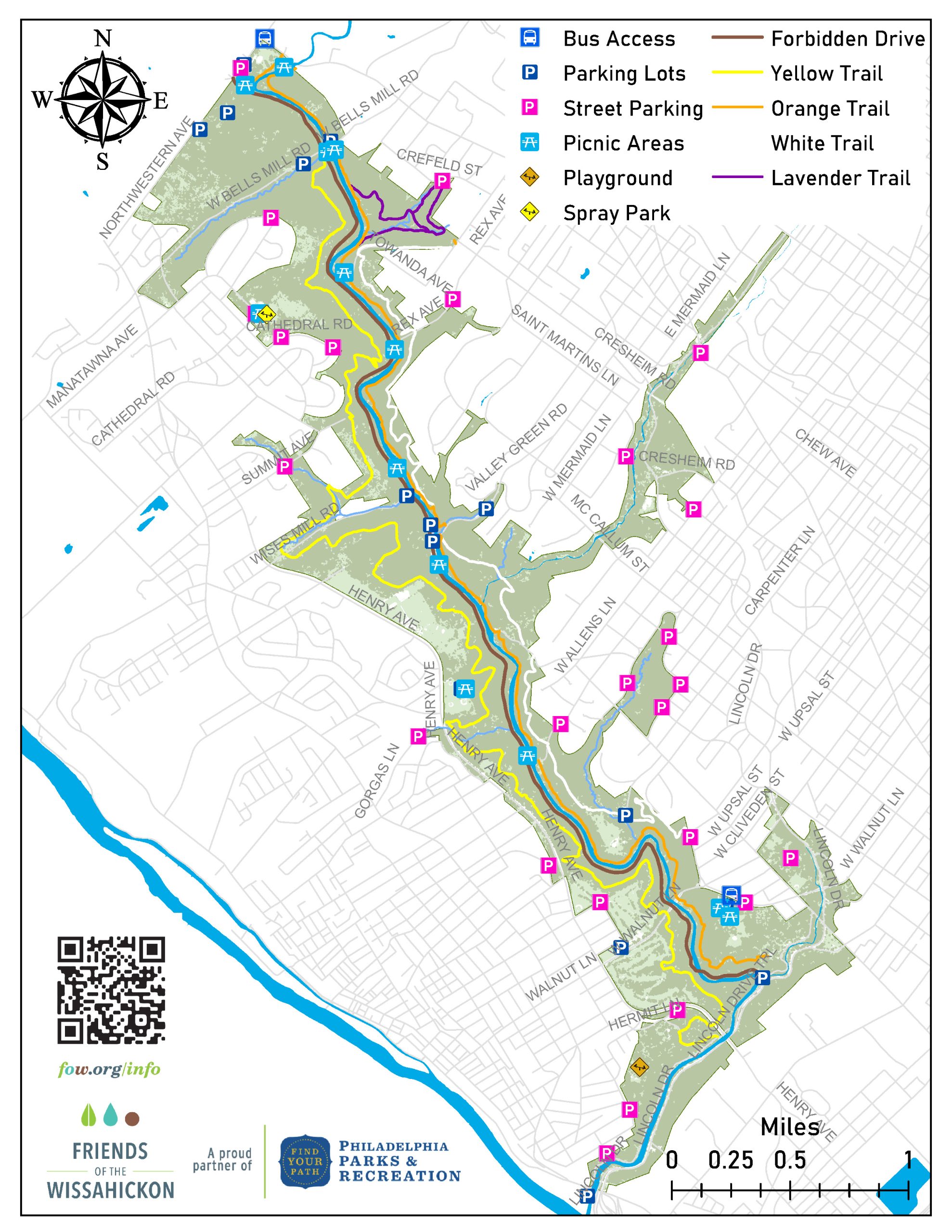 A National Natural Landmark since 1964, Wissahickon Valley Park’s roughly 5 ½ square miles within Philadelphia provides 4,200 acres of forests and streams webbed with 50+ miles of trails teaming with life. It’s the world’s biggest urban park, one of the rare spaces these days where an intrepid explorer can quickly find themselves lost from civilization, seemingly immersed in the wilds of Pennsylvania.

Pick a trailhead, then open your eyes to everything your chosen path offers. Spring reveals new emerald growth. Many of these young shoots and tender tops have culinary and medicinal applications for local harvesters to discover: Stinging Nettle, Pokeweed, Celandine, Plantain, Chicory, Dandelion & Watercress. Some of these fortifying native plants can also be quite dangerous if consumed improperly.

Stinging nettle, for instance, is full of protein, iron, calcium and vitamin C, but it’s covered with fine hairs filled with formic acid, the substance that makes ant bites sting. These little needles are disarmed easily enough by cooking, as are the liver-damaging alkaloids in celandine, which is excellent when pan-sauteed like spinach. 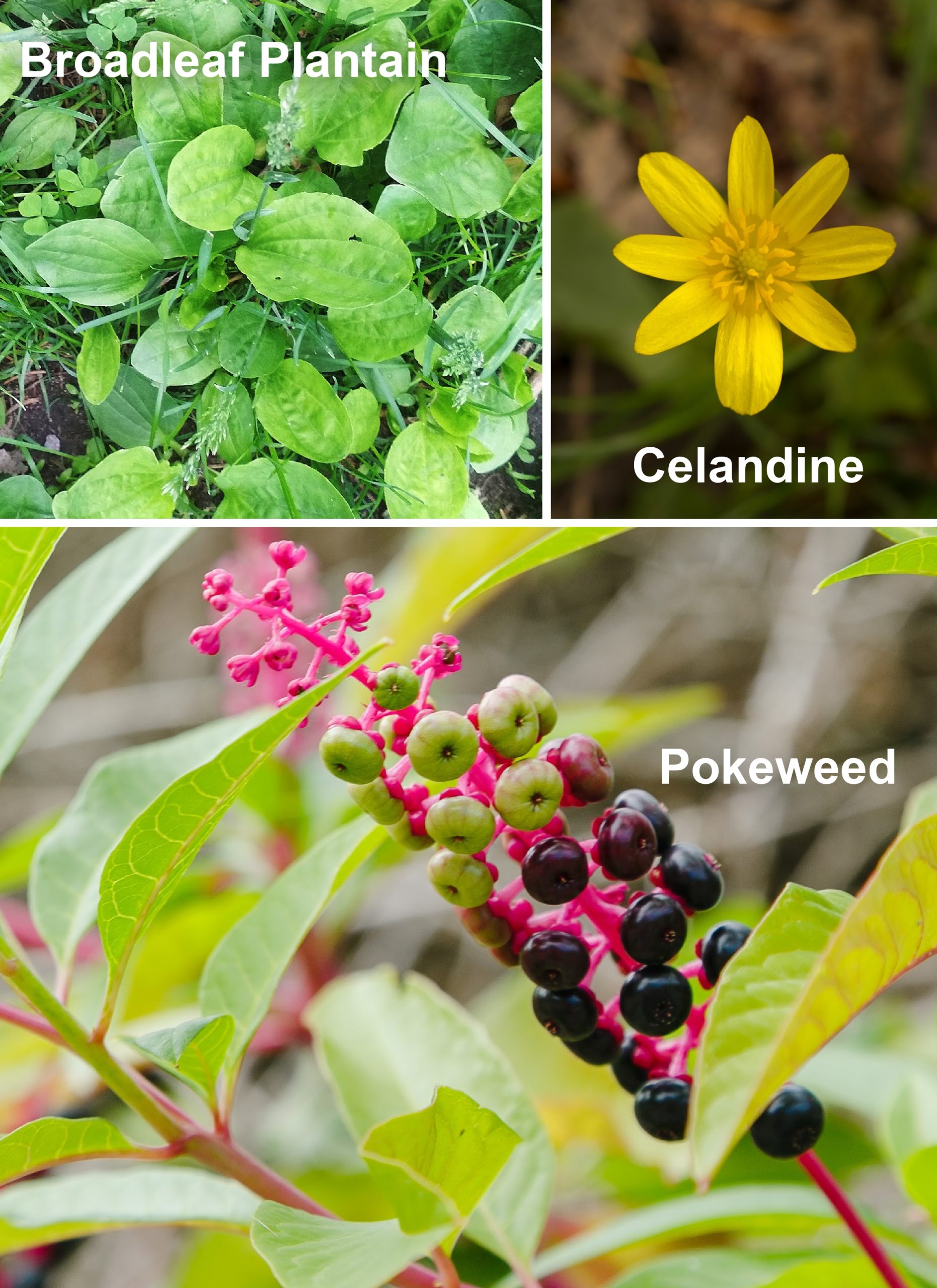 Most of us recognize pokeweed’s dark purple berries on bright pink stems as highly poisonous, which is correct. This sturdy and abundant wild green needs to be boiled three times to break down all the toxins. Still, it’s a traditional food throughout the South & Appalachia regions, where it’s enjoyed with bacon grease and molasses in a dish called “Poke Sallat.”

These same plant toxins can be medicinal in certain applications. Celandine is often used topically to treat rashes, warts and other skin conditions. Pokeweed has antiviral and anti-inflammatory properties; consuming a berry a day is said to ease arthritis. Stinging nettle is used for inflammation as well, and also to help control hay fever, high blood pressure, and diabetes. Plus there seems to be some evidence it can reduce bleeding and improve wound healing.

How about a nice hot cup of Hemlock tea?

Readers familiar with how Socrates died will be relieved to know that the deadly brew that ended his life was a flowering herb, unrelated to the tall, stately evergreens thriving today in the Wissahickon. Eastern Hemlocks populate forests from Nova Scotia to Alabama; their minty needles make a refreshing yellow-green beverage that cleanses the breath and fights scurvy. Gather the tender new growth – the light green needles — which are the most succulent & mild in flavor. 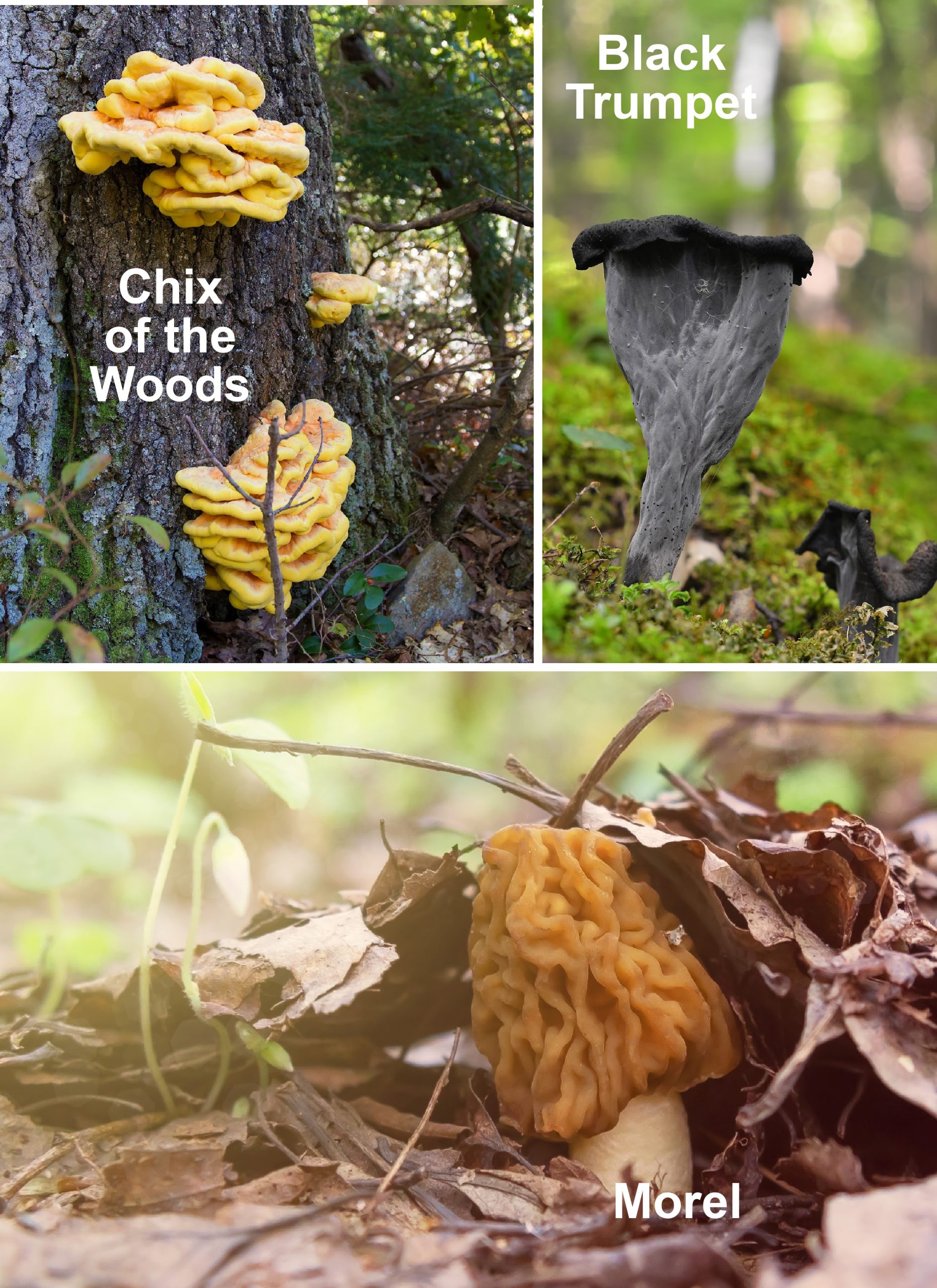 Spring also ushers in Mushroom Season – which will last through July (although oyster mushrooms can be found all winter). Morels are some of the earliest to appear: very delicious, but quite hard to find. Warmer weather will bring chanterelles, black trumpets, and a local favorite called “chicken-of-the-woods” that indeed tastes like its namesake. Look for large clusters of bright yellow-orange, plate-like flesh clinging to the base of trees and fallen trunks. Pan fry with a little water to keep them moist. 🐔

Be cautious where you harvest – stay clear of possible contamination by motor vehicle exhaust along roadsides. Gather sparingly; make sure you leave plenty plants/mushrooms behind to grow and maintain the balance of the microsystems in each area along your hike. (It’s also just good manners to leave some for other foragers.)

Keep your eye out for wildlife! 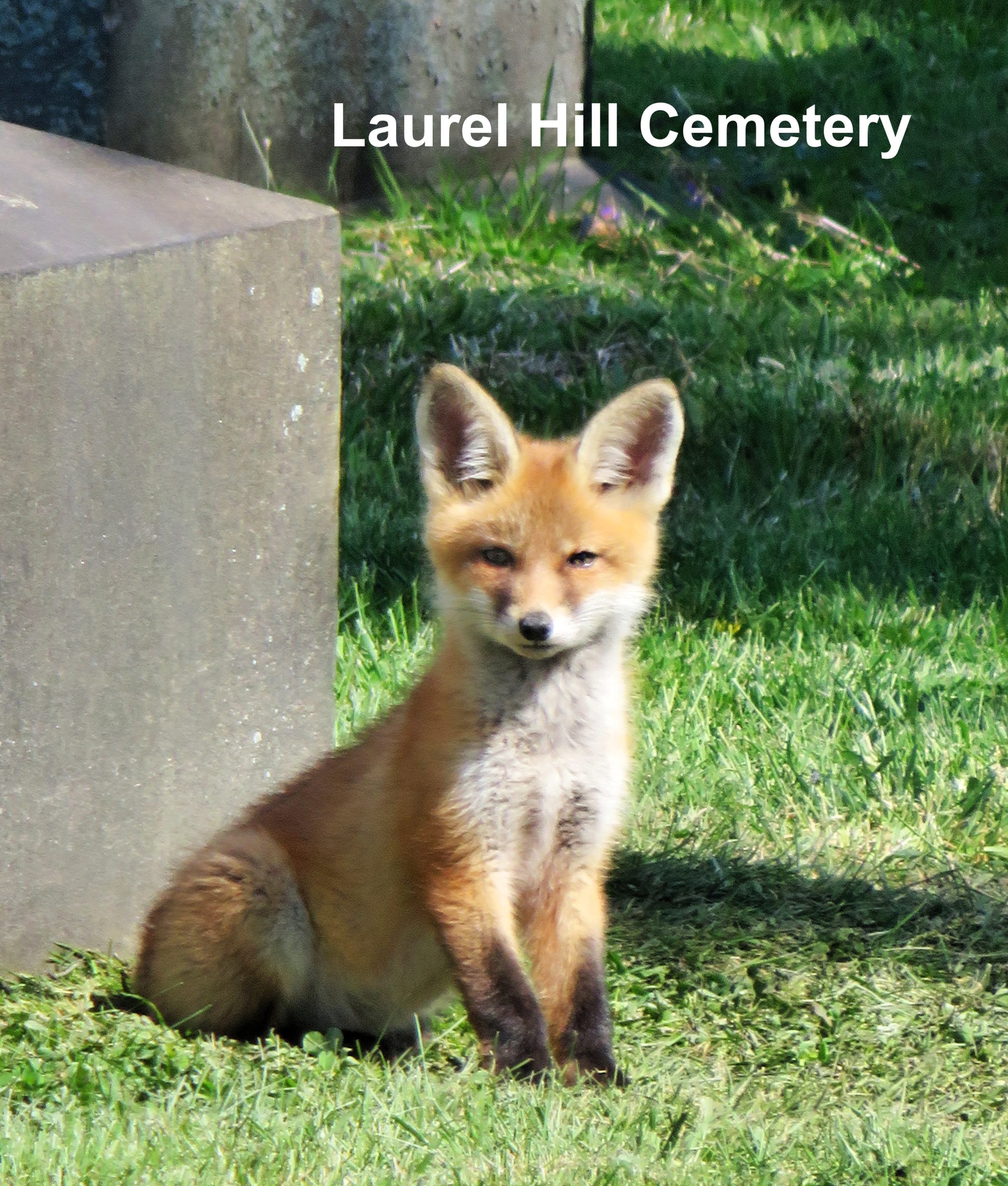 Red fox pups are typically born in March/April, so by May they are usually very active. Look for them along culverts, rocky ledges & outcrops. Fox sightings are also quite common in Philly neighborhoods that border the Wissahickon. There is no truth to the myth that foxes will harm pets or children; unless ill, their defensive response is always flight, never fight. Foxes are part of our natural environment, and should never be fed, captured, or handled.

In addition to common birds we see populating our streets such as European house sparrows, robins and grackles, one will encounter mourning doves (a close relative of pigeons!), wood thrushes, black capped chickadees, both pileated and red-cockaded woodpeckers — you might even catch a kingfisher swooping down into the creek to pluck out a fish and then beat it on the closest branch before swallowing in one gulp! Red winged blackbirds also love water and wetlands, look for their flashy red and yellow “epaulettes” flitting among cattails. Closer to the Schuylkill, you’ll find red-tailed hawks and also the bald eagle has returned to the area, thanks to cleaner waterways.

Wherever you explore, photos and field sketches are very helpful for documentation and remembering the details of each hike. While there are lots of excellent plant/animal identification apps these days, none will capture the essence of your personal experience the way your own renderings can. A notebook is perhaps as important as a camera, to authentically record a day’s discoveries, impressions, and observations. 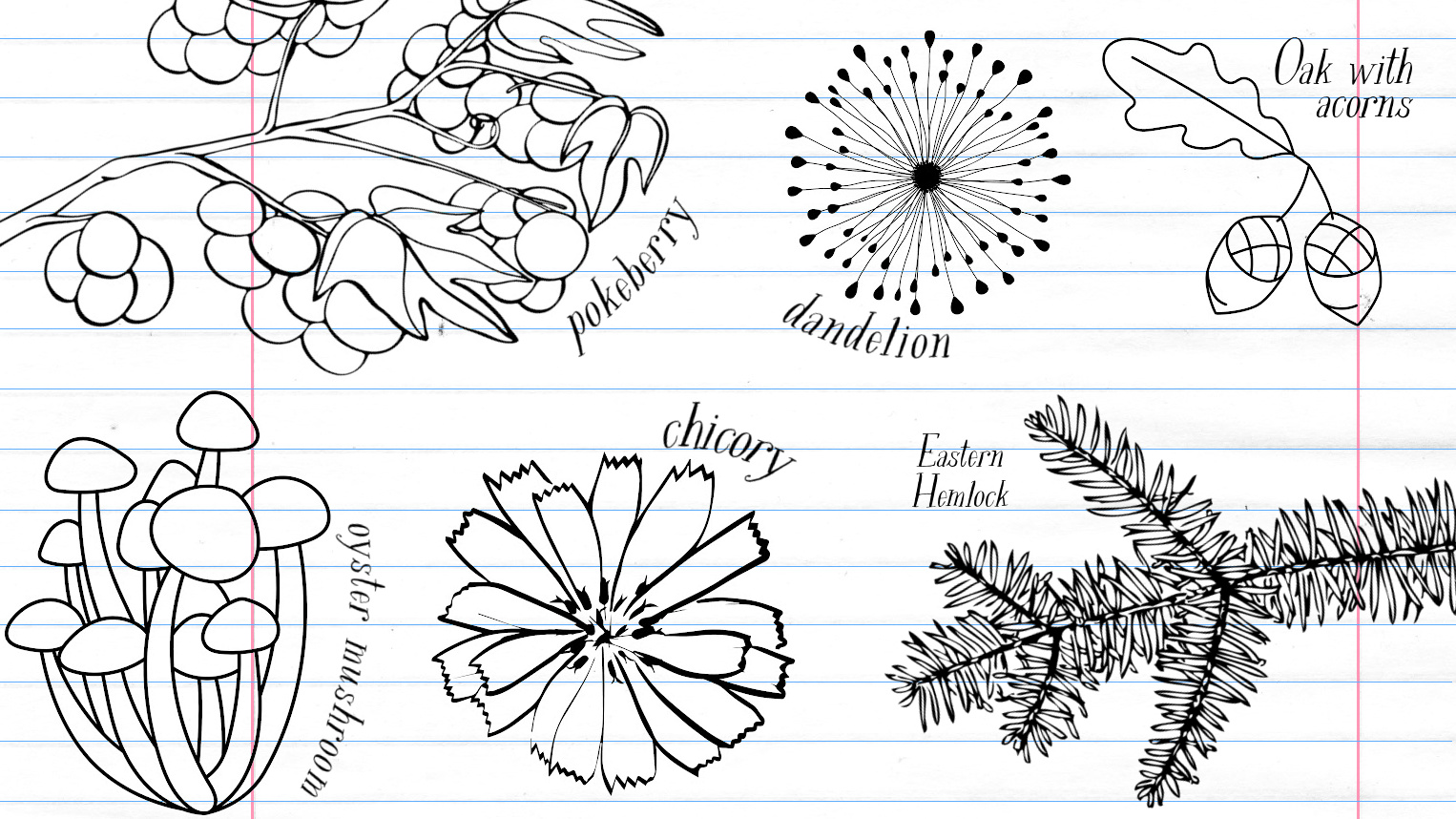 Learning more about our local flora & fauna can turn every walk in the woods into an expedition for sustenance, healing and joy. The more we know, the more we can appreciate the vast natural wealth surrounding us, and value our unique place within it. With honor to the First People of this land, the Lenni Lenape, whose indigenous knowledge continues to inform and inspire generations.

PS — Pro Tip for East Fallsers: here are three local trailheads you can walk to from the neighborhood.

Sunny Scenes From Seasons Past [more…]

Weather, work, and holidays can throw real roadblocks into training plans. Even when we couldn’t make our schedules fit, Naomi had our back. [more…]

Witch Side Are You On?

Dreaming of a new revolution [more…]