I like bees. They’re fascinating. Just not when there’s a swarm of them.

Even the word “swarm” gets me kinda itchy and makes me think of vicious killer bees wiping out small American cities. (I blame the schlocky killer bee movies I watched as a kid in the 70s.)

The point is, I’m not one of those people who wants to get closer to a swarm of bees to investigate. I’m the one headed the other way.

But when Amy Hsu, beekeeper with the Philadelphia Beekeepers Guild (PBG), recently asked me if I’d like to tag along when she introduced a new colony to the St. James School apiary, I had to go. Sure I’d be in close proximity to thousands of bees, but “colony” sounded so much nicer than “vicious killer bee swarm.”

Buzz Kill
In beekeeping, a hive that dies is known as a deadout. While there are any number of headline-grabbing reasons for a deadout — colony collapse disorder, pesticides, American Foulbrood, varroa destructor mites or other bee parasites — lack of honey stores and insufficient population size to keep warm are often the culprits. And with the cold, long winter we’ve had, it was likely that the St. James apiary would suffer losses. 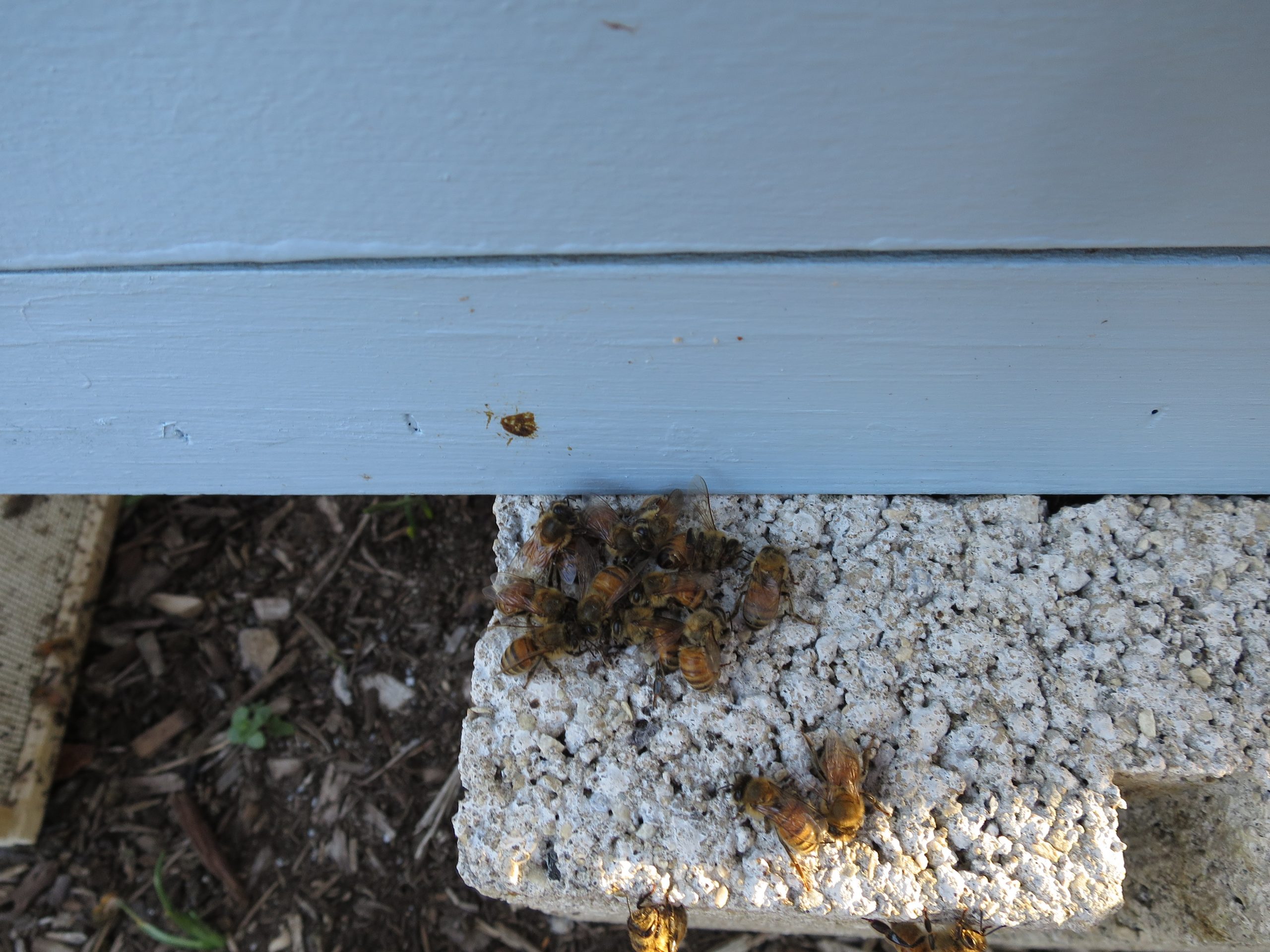 But both hives? “I had a feeling one would die off,” said Amy, “it just seemed too stunted to support itself. We kept drawing bees from the healthy hive to support it, but after we lost the 5th queen, we had to accept that the weaker hive wasn’t going to make it.”

Unfortunately, the drain on resources also doomed the healthy hive. “We found them clustered on the comb. Really close to the honey, but the cluster wasn’t large enough to stay warm.” That was December.

A New Beginning
On a windy April Saturday that didn’t feel much like spring, Amy arrived at St. James to clean out the dead hive and establish the new colony.

She was helped by Annie Lerew, Dean of School Operations and mathematics teacher at St. James, who was learning beekeeping in order to tend an observation hive that will be installed inside the school. “It’s like an ant farm, only for bees” said Annie.

“We have the glass case in the library, we just need to drill an access tube to allow for the bees to travel outside.” The hive was donated by the PBG and will also be cared for by another budding beekeeper, Head of School David Kasievich.

While Amy cleaned out the old hive, dusting dead bees off of the honeycombs and checking to see if the combs could be reused, Annie made holes in a jar of sugar water that would be a temporary food source for the new colony.

Most of all, she talked about the honey. “We’d love to get some honey for our kitchen. We would probably give some away as gifts, but our chef, and especially the kids, would be thrilled to add it to the menu. They were really looking forward to it last year” she said, dabbing at a bit of comb and sucking the honey off of her finger.

“Wow this is so good it doesn’t even taste like honey. I’d love it if we could get enough from these combs for a cup of tea.”

But she agreed with Amy that the miniscule amount of honey on the combs would be better used by the bees. “You want to give them all the resources you can, especially in the beginning, to ensure they develop a strong healthy colony.”

What was most important Saturday was to get the new bees (about 12,000 thousand of them) out of the box and into the hive.

Annie sprayed the swarm with sugar water to keep them calm while Amy removed the queen’s cage. Attendants crawled over the small wooden box. Here’s a clip of the big release:

With a cloud of worker bees circling, Amy turned her attention to the queen.

“I like to give the bees three days in the hive before checking that the queen’s made it out of the cage. The important part if that the colony accepts her. Because the queen and the bees inside the box are from separate hives, that three-day period allows their respective pheromones to mix and become one. If we didn’t do that, they’d kill her because she’s not one of them.  Right now, they seem to be OK with her — they’re not biting at the mesh of her cage, so that’s a good sign.”

She tacked the queen’s cage to a frame at the center of the hive while bees buzzed all around her. “I don’t wear a veil or gloves or use smoke at this point because a new hive isn’t aggressive. They haven’t made anything yet to defend. The ones that sting you are the ones that get stuck in your clothes. For me, they usually crawl up my pant leg and sting my thigh“, she said.

“That’s why I tuck my pants into my socks.” She got off lucky Saturday, setting the frames in the hive and closing it without getting stung.

“Now, I’ll wait a week after the queen is released before opening the hive again to check on her laying pattern. If you open it before then, the bees could blame that disruption on the queen and kill her. We’re not sure why that happens, but I’ve seen it myself. There’s so much we don’t know about them.”

What’s next? Another shipment of bees (for the second hive) is on the way to St. James, due to arrive in mid-April. With two hives running, it won’t be long before we can get a taste of St. James honey!

A few days after we wrote our initial article, the bees “absconded.” Not familiar with that term? Neither were we. According to Amy, “absconding is when bees leave the hive en masse to go somewhere else. It means something wasn’t right in the hive and they wanted a new “home.”

More info and cool photos on the PBG Facebook site (4/7) from PBG President Don Shump (who re-hived the bees):

BEE UPDATE: Hive and seek. Swarm call at St. James. Bit of a shock considering the late winter. Turned out to be a package install that didn’t like the new digs. Candy released queen may have been a factor. Likely lack of feed and small box to blame. On low branch; shook in hive only to have the girls take flight before the lid went down. Congregated on queen cage; likely attracted to lingering scent. Suspect queen may be lost. Held cage up to form a gauntlet of bees. Removed living armor back into box with a queen excluder to be on safe side. Added feed and will check in a few days.

Amy chimed in on the page to say:

I don’t think box size matters (I’ve only ever installed packages into a single 8-frame medium and they stay when happy to draw the comb). I think the fact that the syrup can holes weren’t big enough (and maybe the plastic foundation) were the main issues here. Thank you for re-hiving them!!!