Anyone who’s walked past St. James the Less knows how beautiful the 19th century church is, but too few know that it was an empty shell not long ago. It’s been a long road turning St. James from a derelict property into an innovative school and vibrant community hub, but another step was taken on that path on Wednesday, February 11th. 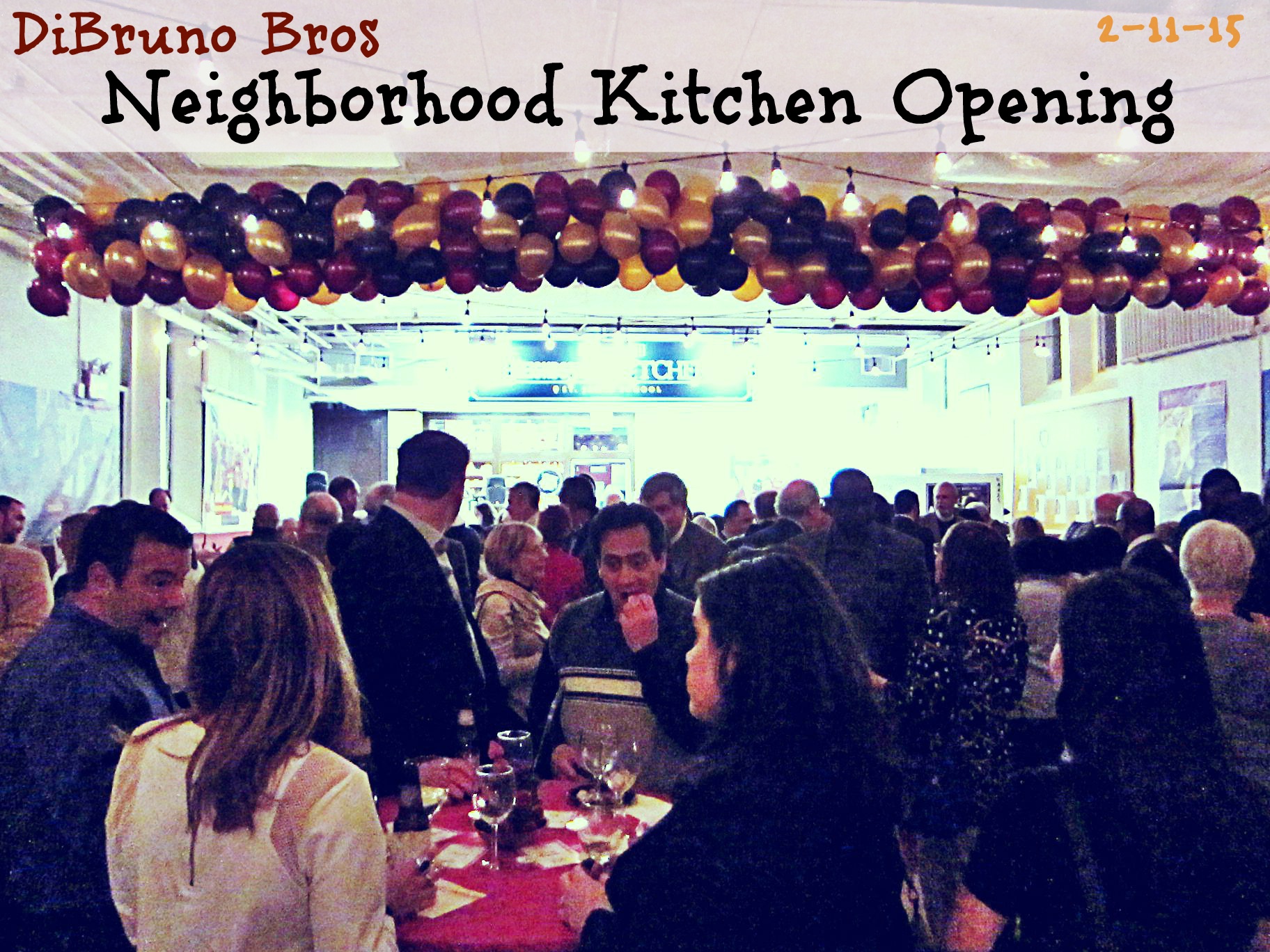 Administrators, faculty, community organizers, and donors gathered in the school’s refurbished basement to celebrate the opening of the new “Di Bruno’s neighborhood kitchen” at St. James. 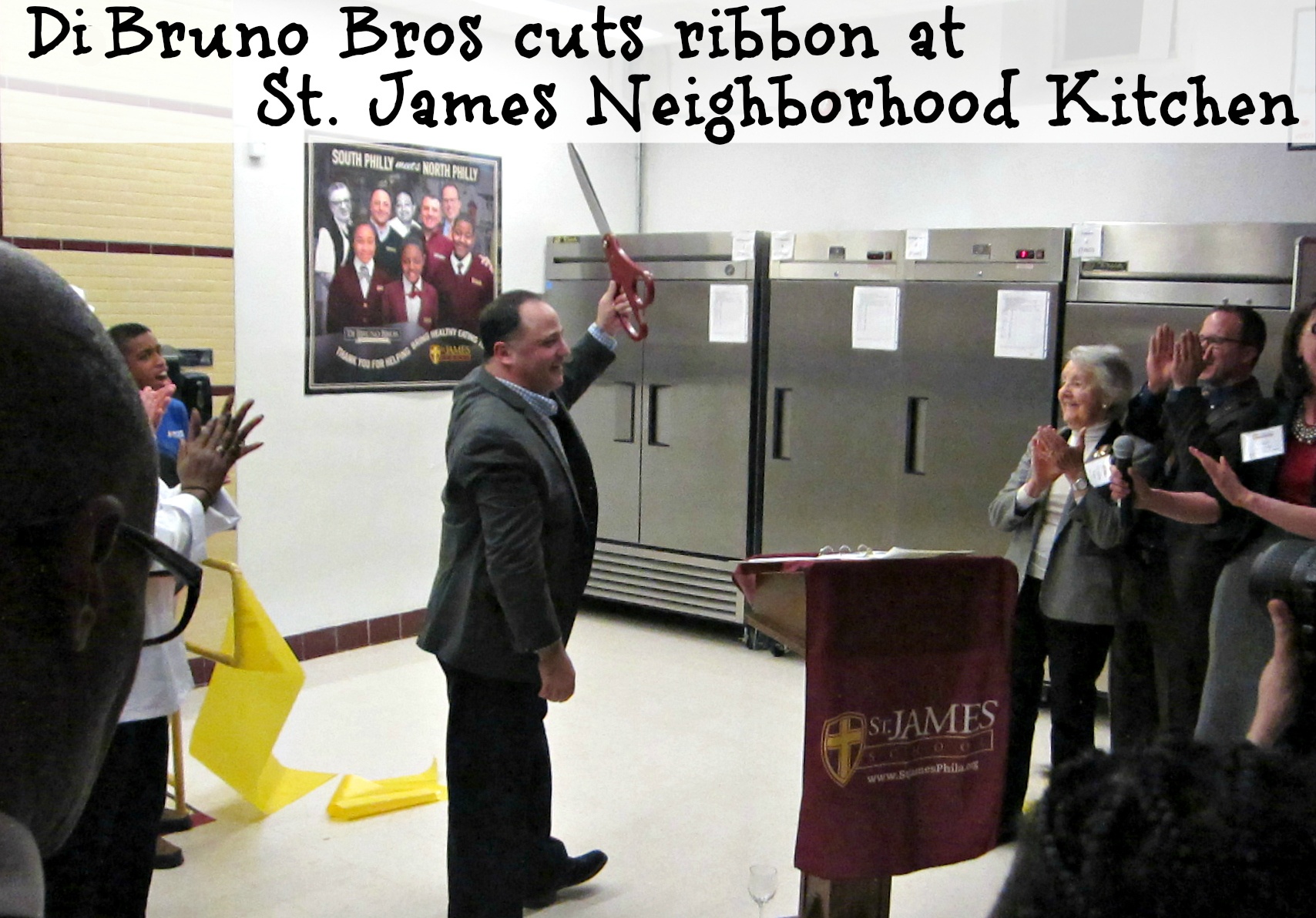 Funded in part by a $75,000 donation by Di Bruno Brothers, the kitchen will provide healthy food made from fresh ingredients — some even grown on the grounds of St. James!  Bill Mignucci Jr., co-owner of Di Bruno’s, cut the ribbon for the new kitchen and explained why it made all the sense in the world to team up with St. James.

The school’s community focus and emphasis on good food mirrored DiBruno’s own philosophy while echoing the spirit of its founders. His brief, engaging speech gave a nod to his beloved grandmother’s generous heart:  “She always told us, it’s the giver who is always the biggest receiver.” 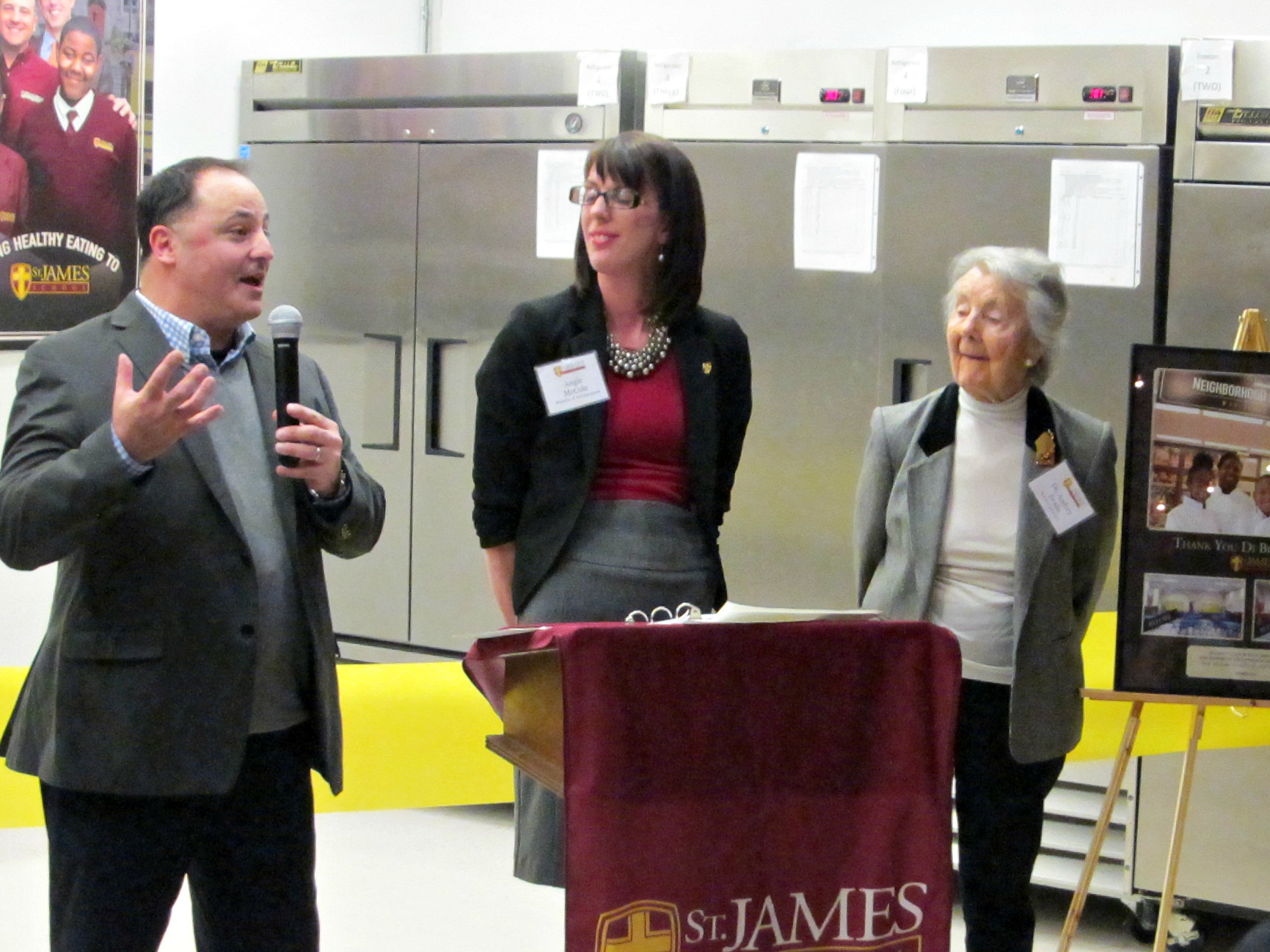 The event was a huge success, bringing out a lively crowd of donors, neighbors, local politicians and community organizers. 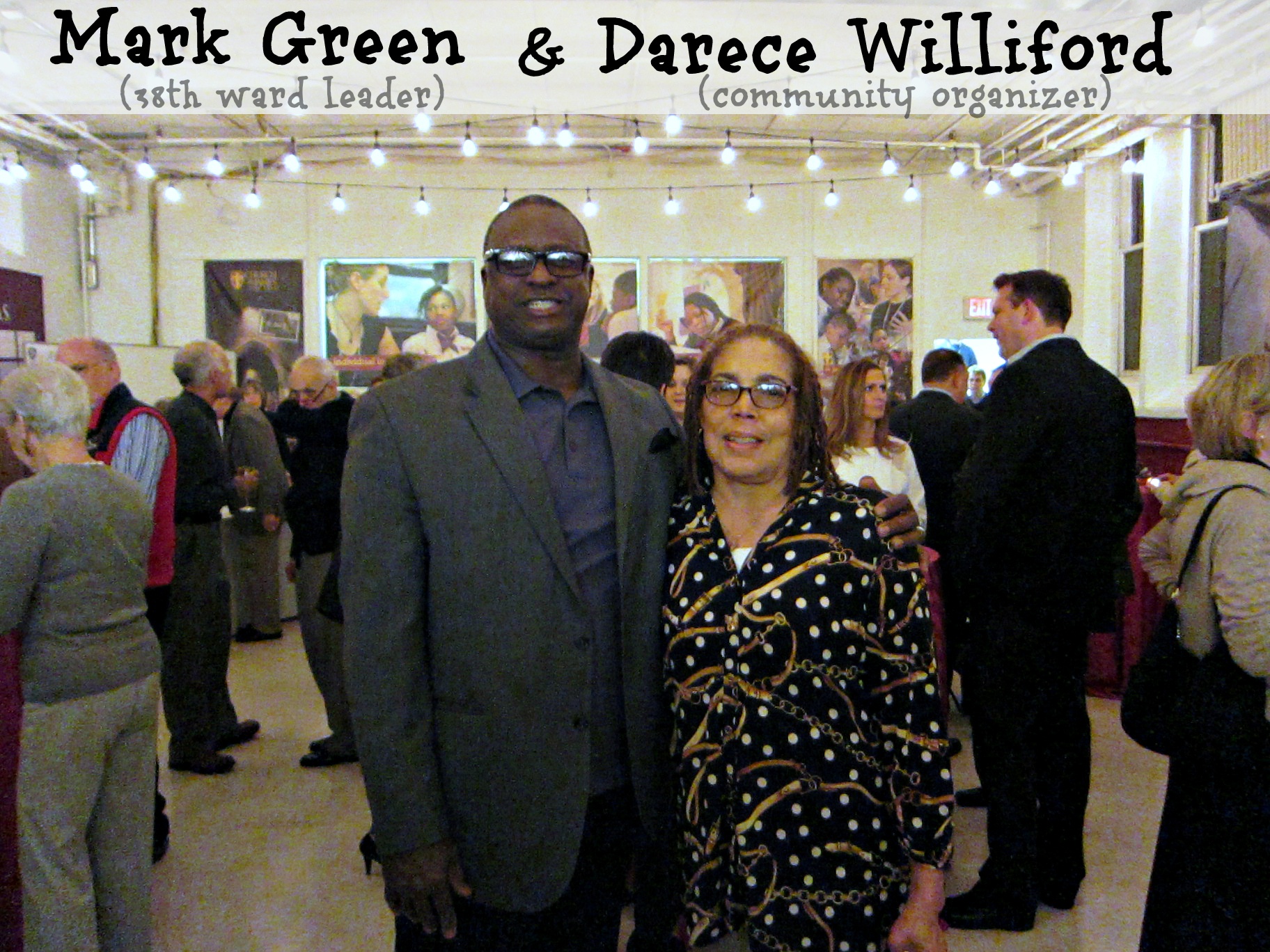 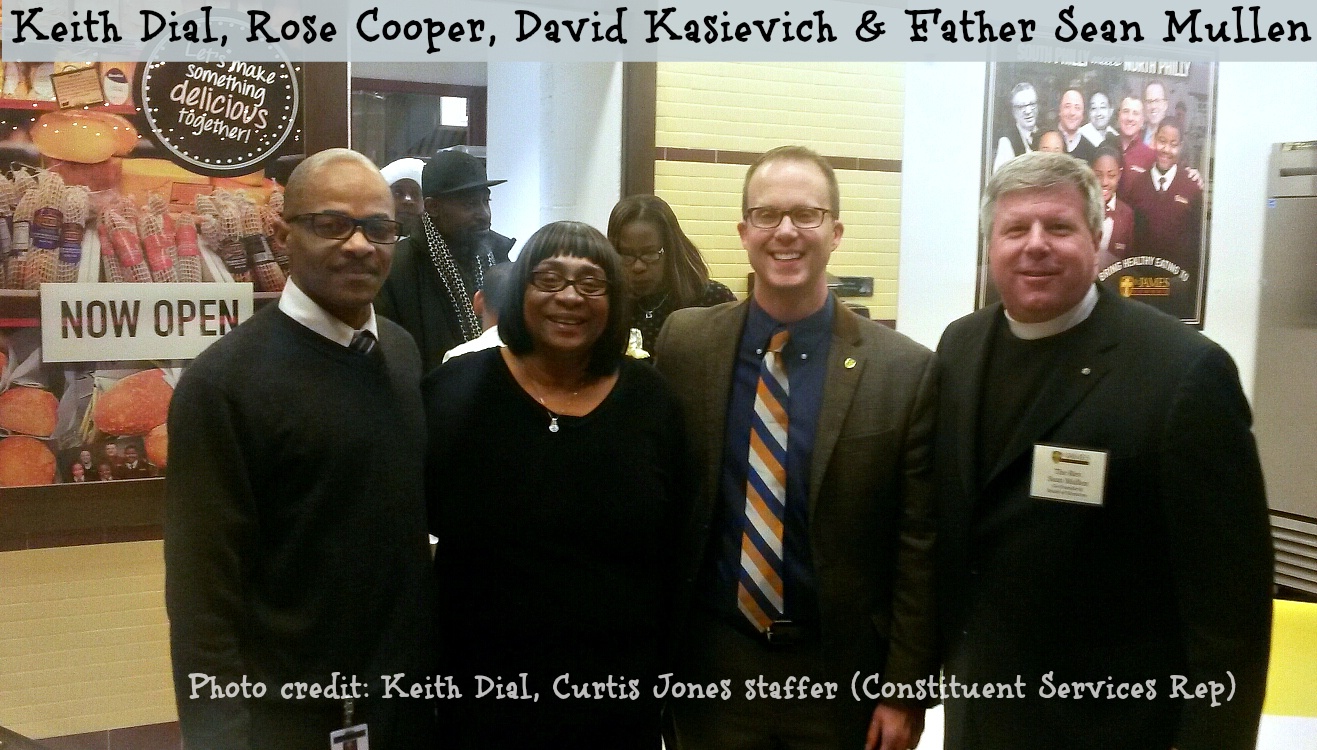 “Rose was my first community partner. We met in 2005 at a little storefront church on Allegheny Avenue, back when St. James was a very dark spot in the neighborhood. It was sitting empty, windows and doors were boarded. It was a sad spectacle.”

Rose agreed, and added:  “We wanted to build this place back up. And I worked together with Reverend Sean, my association, and the neighborhood to get volunteers in here. Cleaning, building — whatever we had to do.”

To Reverend Mullen, Rose was the school’s liaison with the community, helping him stay informed about what people were saying:  “It was critical to make sure the voices of this neighborhood were heard as we moved forward.  This success is very much due to Rose and the people in this community.” 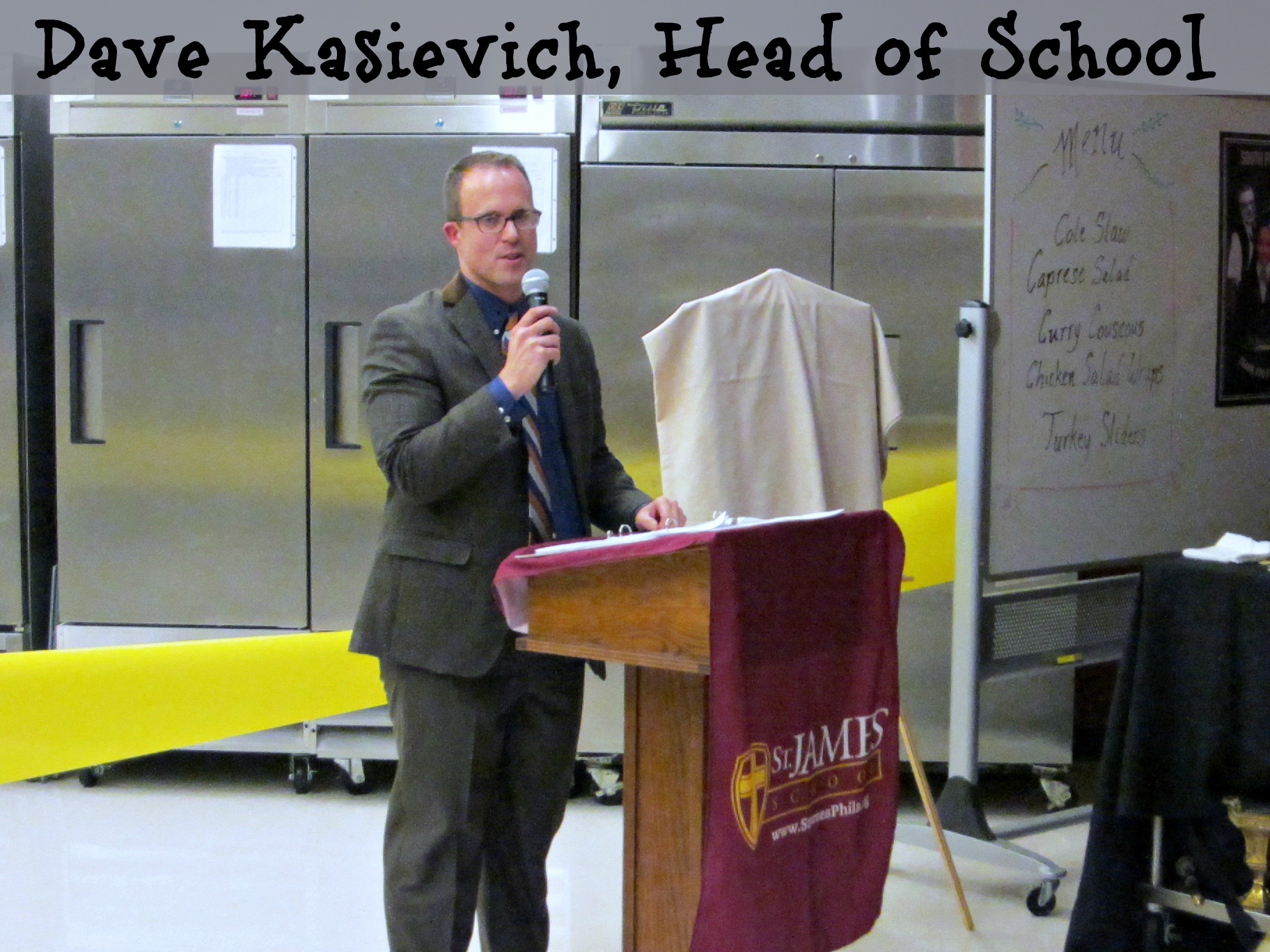 Before he gave his blessing to the new kitchen — which he called the heart of the school in the same way the kitchen is the heart of a home —  Reverend Mullen recalled earlier days, when lunches were brought in from surrounding institutions to feed the kids.  Sandwiches, mostly, wrapped in plastic and tape which tended to add a… flavor. Though the students were thankful for the generosity, they are looking forward very much to fresh, healthy meals to support them in their academic endeavors! 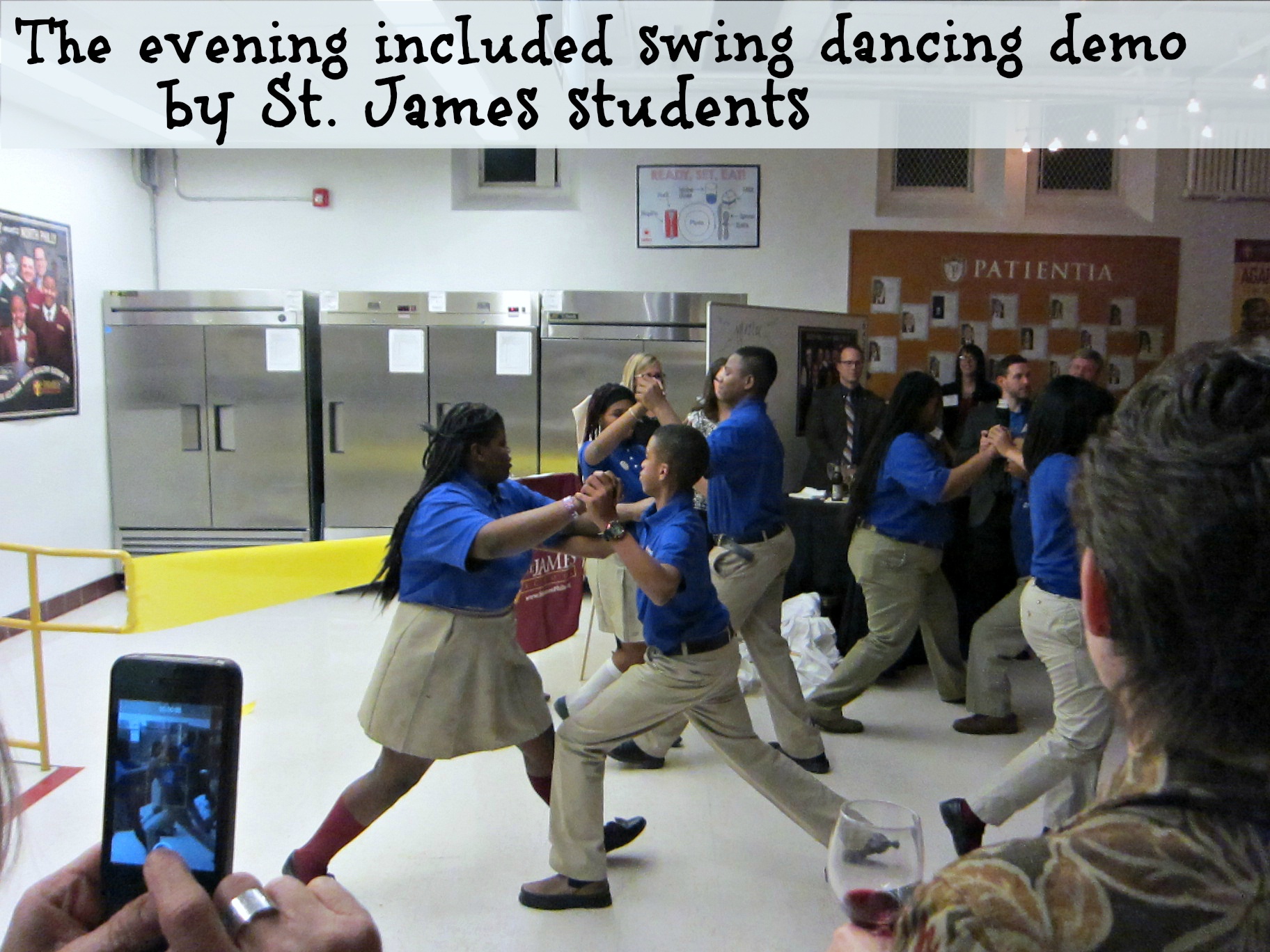 Sarah Carroll, ELA Teacher, already has noticed changes in her 8th grade students, who used to complain about how there never was enough food — even getting “worked up” over access to treats like grapes or berries:  “Now my boys are always full and ready to meet the challenges in my classroom. It’s remarkable.”

The growth of the programs and services offered by St. James has increased rapidly since St. Mark’s Episcopal Church took it over in 2008, fueled by many of the donors who were in attendance Wednesday night. Thanks to their support, the school spends roughly $21,000 a year per student — on par with a private school, said Father Sean — while only charging an annual fee of $300 to enrollees.

This shockingly low tuition figure is a testament to the strength of the schools’ fundraising network, built largely by Audrey Evans, who was instrumental in securing the partnership of DiBruno Brothers and other sponsors. It’s the only school of its kind in Philadelphia.

Ezekiel McLeod, an 8th grade student, spoke briefly about his experiences at St. James before listing an impressive roster of schools that have already accepted him next year: Penn Charter, LaSalle High, West Catholic… too many to remember, in fact.

Ezekiel thanked Chef Deb Anthony of St. James, for providing so much amazing food, specifically the jerk chicken and the five-cracker green beans, declaring them worlds better than the frozen meals they were used to.

He concluded with gratitude to the donors & the DiBrunos for their wonderful new kitchen —  “And thanks for all the cheese!” 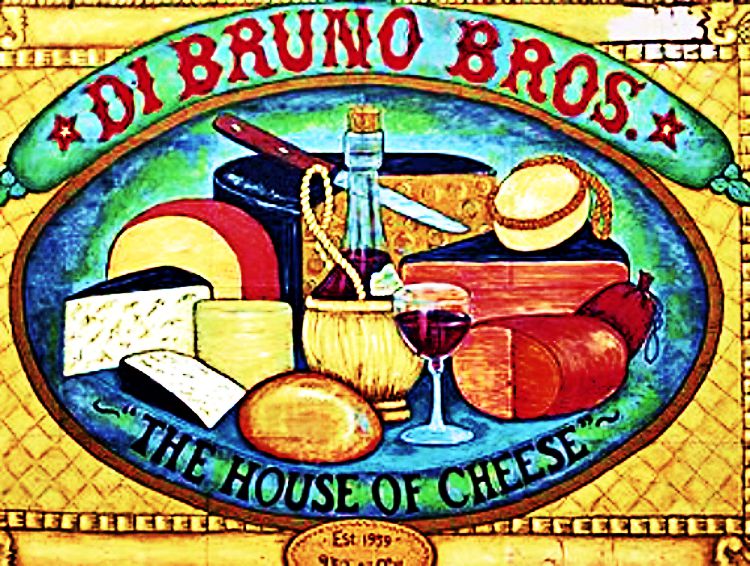