A Festive Day for a Special Group

On a sunny afternoon just before Mother’s Day, a sisterhood of breast cancer survivors gathered at Treasures Banquet Hall on Germantown Avenue to celebrate and to hear each other’s stories. The Local’s own Lenora Gaillard created the event to “honor these strong women and give them something fun to do for a change, after a year of so much bad news.”

The group buzzed with jokes and laughter well before the main speaker, Connie Strouder, got to the mic. Like many in the crowd, her relationship with Lenora goes back years. “Connie and me worked at Suburban General Hospital out in Norristown,” said Lenora. “I was an X-Ray technician and so was she, specializing in mammography. We became friends right away. She’s such a nice lady.”

At the mic, Connie shared her story of survival. Of how her and her brother came down with breast cancer at the same time. (Yes, men can get breast cancer too – a flyer at the event described how Richard Roundtree, the man who played “Shaft” in the famous movie series from the ‘70s, battled breast cancer.)

Connie’s story included the x-rays that first revealed her cancer. As the ladies in the crowd passed the images around, Connie provided tips to them for speaking to others in their social circles who might be hesitant to get tested for breast cancer. She spoke of how easily the smallest tumors or even aberrant growths, can be detected and removed with nothing more than a needle.

“They can just suck it out. It’s not like the old days where most things required invasive procedures.” 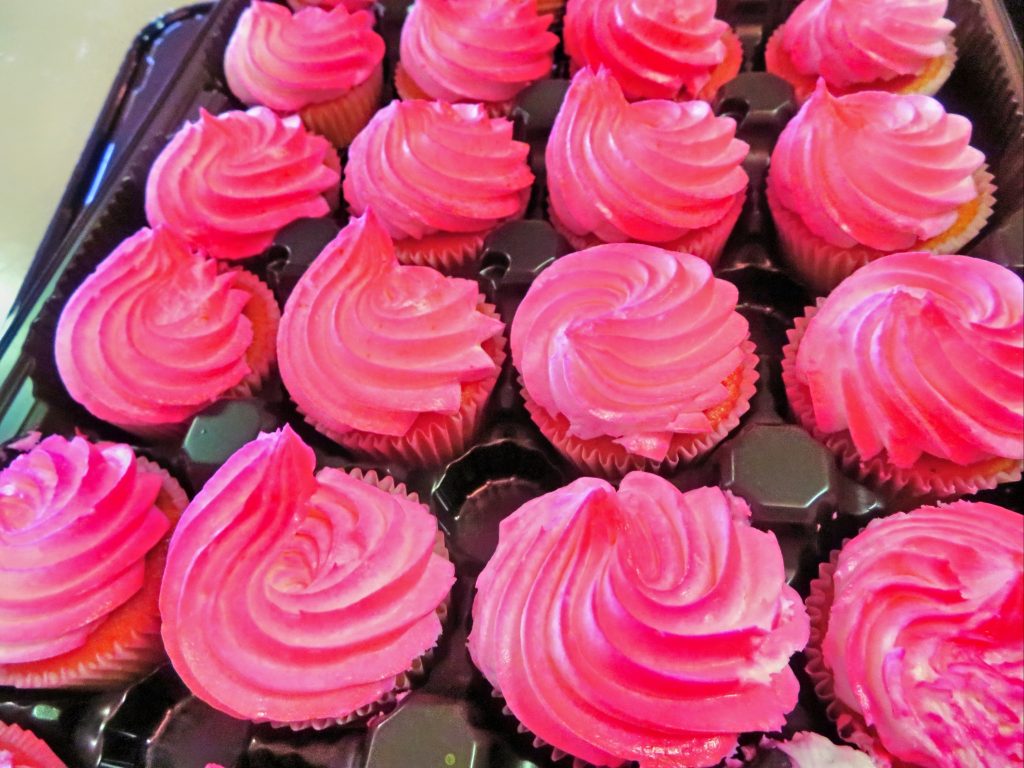 She also mentioned new treatments that were more targeted and less draining than chemotherapy. For her the myths about the state of medicine can literally kill through fear. She concluded by encouraging the ladies to keep getting tested and to spread the message to others. “It’s an act of love that might save a life,” she said.

There was a break as the food, donated by Sister Muhammad’s Kitchen Bakery, arrived. A down-home crispy fillet with well-seasoned roasted potatoes and green beans that popped with flavor. (Hat tip to the chef, Garland Rhodes, who also is Lenora’s grandson, and to Sheena Thompson and Monique Gaillard for serving the food.) Pink cupcakes rounded out the meal.

Lenora passed out the gift bags she made for the ladies while NW Local Editor Carolyn Fillmore played the role of Bingo caller. The pink breast cancer themed playing cards were in keeping with the day’s theme. Some good-natured ribbing was heard as a couple ladies won more than once.

As the luncheon wound down, the ladies lined up for Polaroid selfies at the selfie station. For those born before the digital age, it was a blast to see the slow-developing magic of Polaroids again. (But judging by the camera from Urban Outfitters, it’s a fad that’s back again – like vinyl records.)

The day ended with many hugs and goodbyes as the ladies stepped out into bright sunlight. “That was a nice affair,” said Lenora, taking a seat and a well-earned break.

Special Thanks
The event couldn’t have happened without their help. Lenora thanks them for “their kindness and generosity. They’re such good people – always giving back to the community”:

About The Local 116 Articles
The Local byline reflects community-created content (usually from social media, often from audio/video sources) that we've collected and edited into an article for our website/newspaper.

A GSSD Board for All

A suggestion for creating a more representative board [more…]

Parks are welcoming green spaces used by rich and poor, old and young, and people from all faiths and walks of life. [more…]