I was still trying to figure out why I was wearing a toga, when an energetic band of similarly attired people rushed to my side and ushered me on to a stage. The ruby-colored curtain was just about to rise. My unconscious mind had dropped in on what I assume, given the togas, was the opening night of a production of Shakespeare’s Julius Caesar.

I remember the overwhelming panic I felt as I tried to explain to my fellow thespians that I didn’t know a single one of my lines. Not a one. And you can’t exactly improv your way through Shakespeare. Try to speak casually in iambic pentameter. It’s hard.

Now, my dreams over these long months of lockdown don’t usually have such a straightforward (almost sitcom-like) set-up as this. Most of them have been deeply surreal, expressing (I think) the anxiety of dealing with a pandemic that’s lasted for way too long.

Who can blame any of us for weird dreams? The images that have been ingrained into the American psyche over the last year are the stuff of nightmares. Heartbreaking pictures of overrun hospitals and their fatigued staffs, makeshift morgues in refrigerated tractor trailers, family members waving to one another through glass.

And then there’s the time-bending nature of sequestered life, where days unmoored from steady work or happy hours blend into one another – with the occasional Zoom call to stand in for real company. But sleep is supposed to be the place we go to escape all of that daily misery and isolation. But, alas, life found a way. It always does. (Jurassic Park reference.)

In 1966 an engrossing and strange book was released in Germany (and later translated into English) entitled The Third Reich of Dreams. The book, written by Charlotte Beradt, is a kind of collective diary of the German nation during the war years. After experiencing weird dreams herself, Beradt set out to record the dreams of her countrymen, hoping to shed light on one of the darkest chapters in German, and world, history. The main takeaway? The more unsettling your daily life becomes, the more it haunts your sleep. Frightening images of transmuted daily life and creeping authoritarianism fueled many of the dreams Beradt recorded. Essentially, the horror of life in Nazi Germany seeped into the subconscious of its inhabitants, to the point where they could simply not be ignored. Their dreams reflected struggles of compliance, self-disgust, and bureaucratic paranoia. 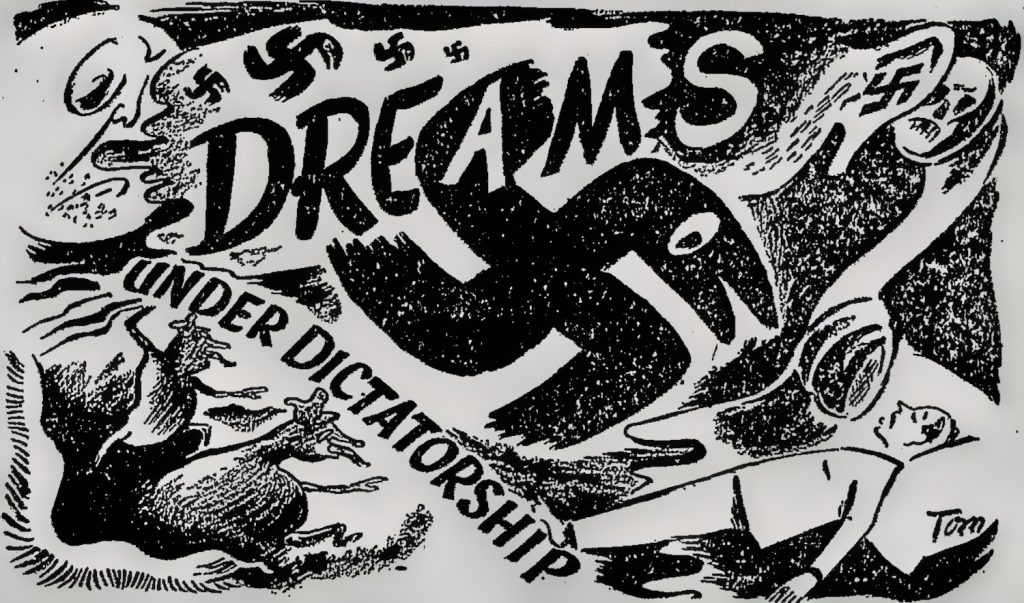 It seems that times of immense societal stress can profoundly disturb people’s midnight movies. In fact, at the start of the pandemic, the Google search for “why am I having weird dreams lately” quadrupled. But that doesn’t necessarily mean that each dream will be explicitly COVID related. Prolonged periods of stress translate into whatever scary scenarios your sleeping brain is partial to. Maybe you’ll be running from an assailant, or falling from the sky, but it’s unlikely you’ll be dreaming of having an ice cream cone on a warm summer day. Stress dreams rarely produce feel-good moments.

Now, I don’t know exactly why my brain decided to hoist me on stage to perform one of Shakespeare’s most famous works. Perhaps it was the fear of screwing something up in front of the hundreds of people in my imaginary theater. We’ll never truly understand why dreams are what they are, or what exactly inspires them – but if you’re looking for a place to start understanding your own nighttime dramas, pick up a copy of the groundbreaking The Interpretation of Dreams by Sigmund Freud. For me, I’d rather just sit back and enjoy the show, and the shallow analysis that inevitably follows when I wake up in a groggy haze.