Not a ghost story — or is it? A man has a weird conversation with a mysterious late-night visitor.

WOMAN WITH THE BLACK UMBRELLA

At first, he couldn’t tell if he was dreaming or not. Well, not even that was entirely true.

It was true that he couldn’t tell if he was awake, but that was mostly due to contrasting sensations. Some hinted he was dreaming, while somewhere behind the veil of peacefulness something whispered it couldn’t last. Perhaps he was nightmaring.

Looking out the window of his girlfriend’s downtown apartment, he was set firmly in the realm of half-wake. It was a place he often enjoyed being, but tonight half-wake felt way more real than normal. It made him uneasy.

The main fixture of the real combating the dreaminess lay directly below him on the sidewalk. It was a lone black umbrella at the door of the apartment complex, the owner shielded from his view.

It had been there for quite some time, apparently its holder fumbling with the keypad. This wouldn’t normally have been much to concern himself with except for the small fact that it wasn’t raining.

The rest of the night wasn’t necessarily silent, but it did seem to be playing the soundtrack of a normal Sunday night. So normal in fact, if one closed their eyes, they might mistake it as white noise from a new age app. “Peaceful Urban Environment” is what it would be labeled and it would exist with all the trappings of this night, complete with a cat skittering along the alley, a car humming to a stop, and a drunk couple spiritedly arguing.  All the normalcy of city life as he knew it.

All was normal, except the umbrella.

He didn’t remember when he’d woken to look out the window. He’d thought he needed to pee, but he’d been sidetracked by the moonlight gliding through the curtains that billowed like a woman’s nightgown. He had always been astounded by how bright the night could sometimes be.

It was a woman’s voice, soft, kind, but authoritative, and it rose to meet him from down below. It startled him, and he immediately retreated from the window as if seeking cover after hearing a gunshot. He lay himself flat at the foot of the bed, his girlfriend’s feet nearly touching his side.

He stayed there, silent and listening, only the clicking of the dishwasher two rooms away to hint at the passage of time. The world outside remained quiet too, but he continued to hold his breath like a child home alone, awaiting a traveling salesman to move along to the next house. But just as the coast seemed to be clear, it came again.

He remained still but this time the woman’s voice persisted.

“I know you’re up there. On the fourth floor. I saw you!”

He cursed under his breath. He was on the fourth floor, but so were several other rooms. Maybe she wasn’t even talking to him. As quick as the thought had come, he dismissed it. Of course she was talking to him. But was he willing to listen?

“Helloooo, I need some help out here!”

Finally he’d had enough. He lifted himself from the bed and looked out the window, seeking the woman. In no time he’d found her. She was exactly where he knew she’d be, staring up at him, her black umbrella tilted to the side.

She was Asian, maybe Japanese, or Korean he couldn’t be sure, but her age was harder to discern. Her face looked like a pool of water, swimming so that it never remained the same for too long. But a smile seemed to hold it together in consistency, cresting along her face like a pod of dolphins. Gone and back again. She made him more uneasy than the umbrella ever could have.

“What do you want?” he yelled down.

“What do I want?” she said, twirling the umbrella in her hands, “I would like to be let up, of course. I have business on your floor.”

“Do you live here?” he asked, not for the first time finding this all very suspicious.

“That’s hardly your business. Now, do you live here?”

The woman’s smile faded for a second longer than usual, leaving only a blank face. It was back almost before he could register it, but he did. It was frightening. She seemed to be tiring of the back and forth. Perhaps she would move on.

“Would it make you feel better if I told you the name of someone in the apartment?”

“How’s your girlfriend? She sleeping well?”

He looked away from the woman for a moment. His girlfriend was fast asleep, peaceful as he’d seen her in quite some time. Maybe the most peaceful he’d seen her since she’d started her treatment.

She was young so he’d hoped that it would be easier for her body to fight. The disease didn’t seem to care about her age though. It didn’t seem to care much about anything except for killing her. He hated it almost as much as he loved her. She looked so beautiful.

He looked back out the window, almost unaware that he was nodding.

This time she said it in exasperation, as if he was just wasting her time. She seemed to have the time to waste, but she was bored of it.

“I—you still haven’t told me what you need”

Suddenly he felt very tired, as if he had been for a long run and had finally sat down upon the couch after a shower. How much longer could he leave her outside?

“Yes, but you don’t live here“

“But then you must have the code.”

He could hardly keep his eyes open. He wanted to just get back in bed with his girlfriend, hold her tightly. Kiss her cheek just to hear her sigh as she always did when she was sleeping and he kissed her. It was the sound of safe and he wanted nothing more than to hear it now.

“You have the code. And you’re the only one up.”

Without realizing it, he was at the landline by the bedside table. He was still amazed that such things existed. It was perhaps his girlfriend’s favorite thing about the apartment. She loved it just like she loved records, old issues of the New Yorker, and Meg Ryan. She often told him that she’d been born in the wrong age. Or she was lost in time. He often told her he was happy she’d gotten lost here with him.

He dialed “732” and he heard the buzzer outside sound. He rushed to the window, forgetting his exhaustion. The woman was already gone, and he heard the metallic click of the front door as it clicked shut.

What had he done?

He leapt from bed, nearly bumping into the side table as he did, but avoided it with a stumble. He slid along the hallway wall, regained his balance, and then sprinted across the linoleum and to the door. He jiggled the deadbolt a couple times to reinforce that the door was indeed locked. On the sixth re-lock, there was a ding from the hallway. The elevator was opening onto the fourth floor.

Through the peephole he couldn’t see the elevator, but he could hear the doors creak open. There was soon the casual clicking of heels. He held his breath. Before he knew it, she had entered his view, her face nearly engulfing the frame. Her face was younger than he’d imagined it would look. Her eyes looked older. She smiled once again and waved with just her fingers as if she knew he were right behind the door. For a moment he was worried she would knock. He was worried she would ask to come in. More than anything, just like being buzzed up, he was worried he would let her.

But she didn’t knock. She turned from the door without a word and walked down the hall to another door, where he knew an old couple and their yippy corgi puppy named Milo lived. She placed her black umbrella in the hallway rack and grasped the door handle. It opened with one pull, and she walked in. However, before closing the door, she took one last look down the hall. He might’ve imagined the wink. Then the door closed.

In the morning, there were paramedics in the hall.

Mr. Martin, the man across the hall, had died.

When he asked how, the over-worked woman in scrubs answered hastily that it had been peaceful in his sleep. It was a heart attack she’d said, not even trying to mask her annoyance.

Mrs. Martin was holding Milo. She was sobbing. Milo was yipping and shaking in her arms.

He wanted to tell someone about the woman. He felt uneasy about it—about his role in it all.

His girlfriend wrapped her arm around him, pulled him in for a kiss. She had energy today. It was a good day in that regard. He kissed her back.

“Nothing, let’s go get some coffee,” he said with a smile.

There was no black umbrella in the hallway rack, so he was hardly sure there was anything to tell anyways. 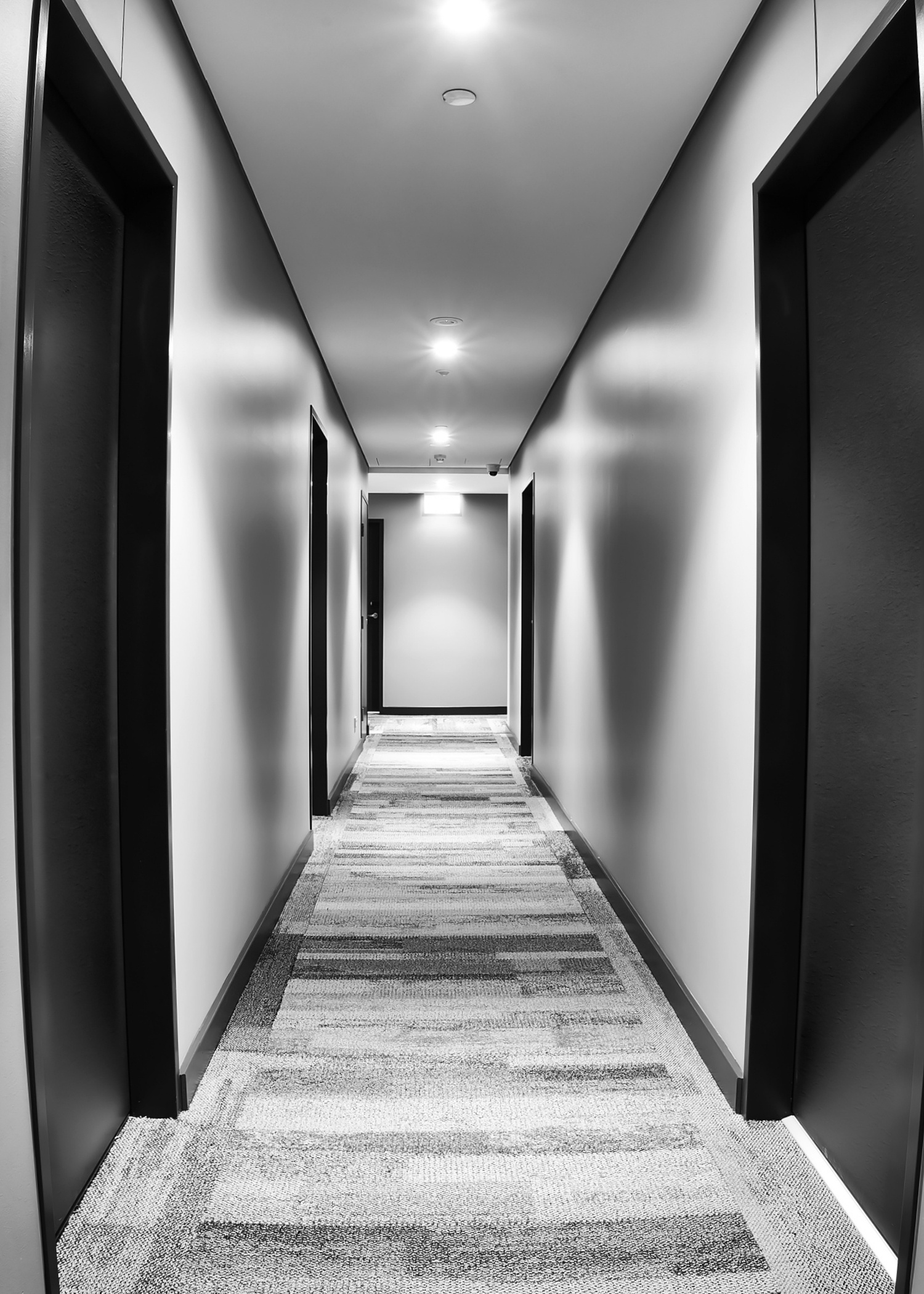 For more of Andrew’s fiction, read “On Indian Queen Lane,” his tender tale about a couple’s snowy walk down East Falls’ oldest street. This story — at least, the part Andrew read aloud — was featured in an episode of WHYY’s Movers and Makers, a show about impactful community creators. Please leave your comments and feedback below.

Fun Fact: Andrew’s stories have also been published in print! Check out Local paper issues from 2022: January, February and October. We love to support great original content like Andrew’s fiction, and the artwork shared on our pages. Writers, illustrators, photographers and creatives of all kinds are warmly encouraged to email editors@nwlocalpaper.com with your ideas about how our pages can highlight your artistic awesomeness. (Thanks to Illuminate the Arts grants, we do offer a small stipend.)

About Andrew Jaromin 5 Articles
Andrew Jaromin lives on Indian Queen Lane in East Falls and has done so ever since graduating from Saint Joseph's University five years ago. Although originally from New York he has come to consider Philadelphia his home. He works as a 4th Grade Reading Teacher at Lindley Academy Charter School in North Philly, where he also coaches basketball. He doesn't like to brag, but if he did, he might mention how he has won two championships back to back with his middle school girls basketball team. Andrew is also a passionate writer, who is simply looking for his big break on one of the novels he has written. He is looking to share his short fiction stories with the paper in the near future! More writing by Andrew can be found at andrewmjaromin.com.

McMichael on the Move

The long-awaited playspace at McMichael Park moves forward, while funding for the park takes a step back [more…]

You Can Go Home Again

Two Fallsers return to their old stomping grounds (Krail & Ridge Ave), and take us on a neighborhood tour through their eyes. Photos, memories, old friends — and new — on a day trip spent with [more…]

Faster than the speed of sound (Or just really fast)

As the weather heats up, so does the pace in Harrisburg. [more…]