In celebration of the arrival of fall, this October’s “Tuomi’s Time Machine” article features a rather unusual drawing clipped from an issue of the Philadelphia Evening Public Ledger celebrating the autumn splendor of the Wissahickon Valley.

The drawing – which shows the routes of four fall “trolley hikes” in the Wissahickon – is just as interesting for what isn’t shown, as opposed to what IS. Discovering what’s missing adds meaning to our understanding of the time in which the drawing was made. (And is a fun way for history buffs to find deeper meaning in all kinds of historical documents.) 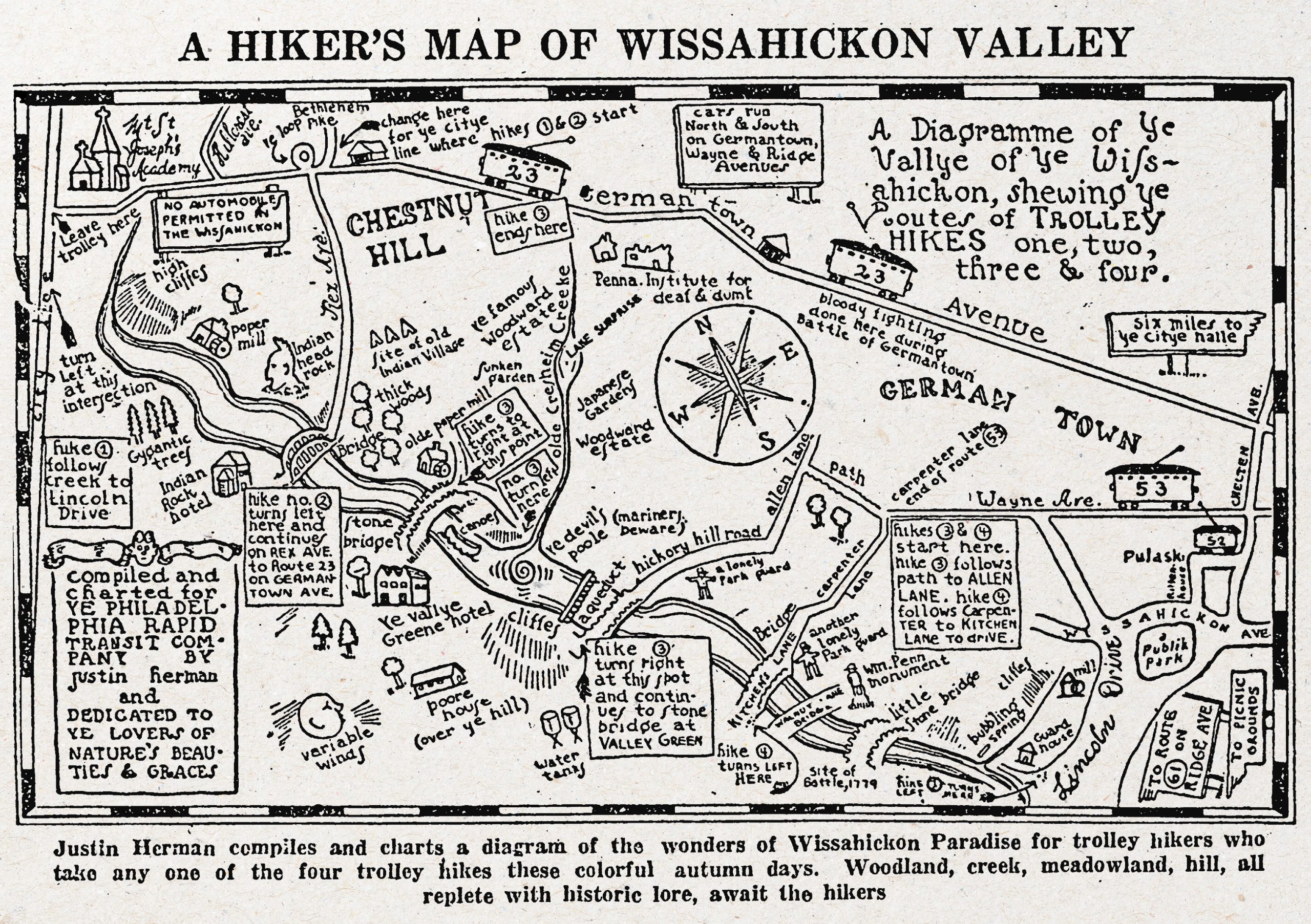 On first thought, this makes some sense, since the PGCH was a competitor of the company that created this diagram, the Philadelphia Rapid Transit Company (see the panel in the bottom left corner).

Presumably, the PRT wouldn’t want to help to advertise a competitor’s transit system in their drawing! However, the railroad line to Chestnut Hill could have made the series of tours more accessible and attractive to Wissahickon hikers by making it easier to connect to the trolley lines via the train.

Also noticeably absent from the drawing is Mount Airy?! Both “German Town” and Chestnut Hill are represented, so why was Mount Airy left out? Perhaps the publication date of the drawing provides a clue. Though the diagram is undated, it likely dates to the early 1920s because of the sign (in the upper left-hand corner) forbidding automobiles from the Wissahickon.

Automobiles were first banned in 1921 from what we now know as Forbidden Drive. Returning to the discussion of the missing Mount Airy label, the term “Mount Airy” was not used until years later and, when it was used, it referred to the business district on Germantown Avenue and its immediate surroundings. It wasn’t until the late 1920s and 30s that the term would begin to be used more widely as residential areas of Mount Airy were developed. Until then, Mount Airy was regularly referred to as Germantown.

There are many other examples of “negative evidence” buried in historical documents; it’s just a matter of taking the time to interpret them. Upon doing so, you will often be rewarded with much more information than you had ever hoped for!

Justin Herman (1907 – 1983) was a stage & screen artist born in Philadelphia, best known for his short films for Paramount that were mostly filmed in Bucks County, using local people as performers (subjects included the Bucks County Playhouse and the Lambertville Music Circus). He was nominated for an Oscar three times, and won the Peabody for Best Short Film in 1943. He also wrote for the New Yorker, penning captions for illustrations and even contributing cartoons of his own.

The Philadelphia Public Ledger (March 25, 1936 – January 1942) was a popular daily paper whose motto was Virtue, Liberty and Independence. The Ledger was the city’s first “penny paper” — an independent, budget-priced publication that covered everyday people rather than corporate and political Big Wigs. The Ledger promoted the abolition of slavery, and pioneered the use of a pony express and telegraph to distribute content. On April 16, 1934, the morning & Sunday editions merged into The Philadelphia Inquirer.

Historic Germantown’s Library and Archives include an incredible wealth of fascinating documents and publications — lots you can view online, and also available in-person and even via mail. Over 5,000 photos plus books, church records, deeds, scrapbooks and maps going way back to colonial times. Open Tuesdays (9AM -1PM) and Thursdays (1PM – 5PM), email library@germantownhistory.org to inquire about Sunday hours, or request additional assistance.

Is East Falls the kind of community that would welcome a home for sick kids by our favorite residential park?  UPDATE 6/18: KenCrest’s plans for a transitional care home move forward despite Community Council opposition, [more…]