From the rubble of a 19th century industrial building in historic Wayne Junction: a new apartment building & a resurrected diner.

Now, the founder and president of Philly Office Retail, Northwest Philly’s biggest commercial landlord and developer, is at work on his most ambitious project to date, a makeover of the Germantown side of Wayne Junction that has already turned several former factory and warehouse buildings into office, manufacturing and retail space and breathed new life into the area.

His next Wayne Junction project will take him both back to his roots and to a place he has never gone before: Building a new building from the ground up.

Designed by Harman Deutsch Ohler Architecture, his planned building at 113-29 Berkley St. will contain more than 10,500 square feet of commercial space on its street floor and 143 apartments on the five floors above it. Residents will have use of amenities that include a fitness center, bike storage, an Amazon parcel delivery locker and a deck on the building’s green roof. 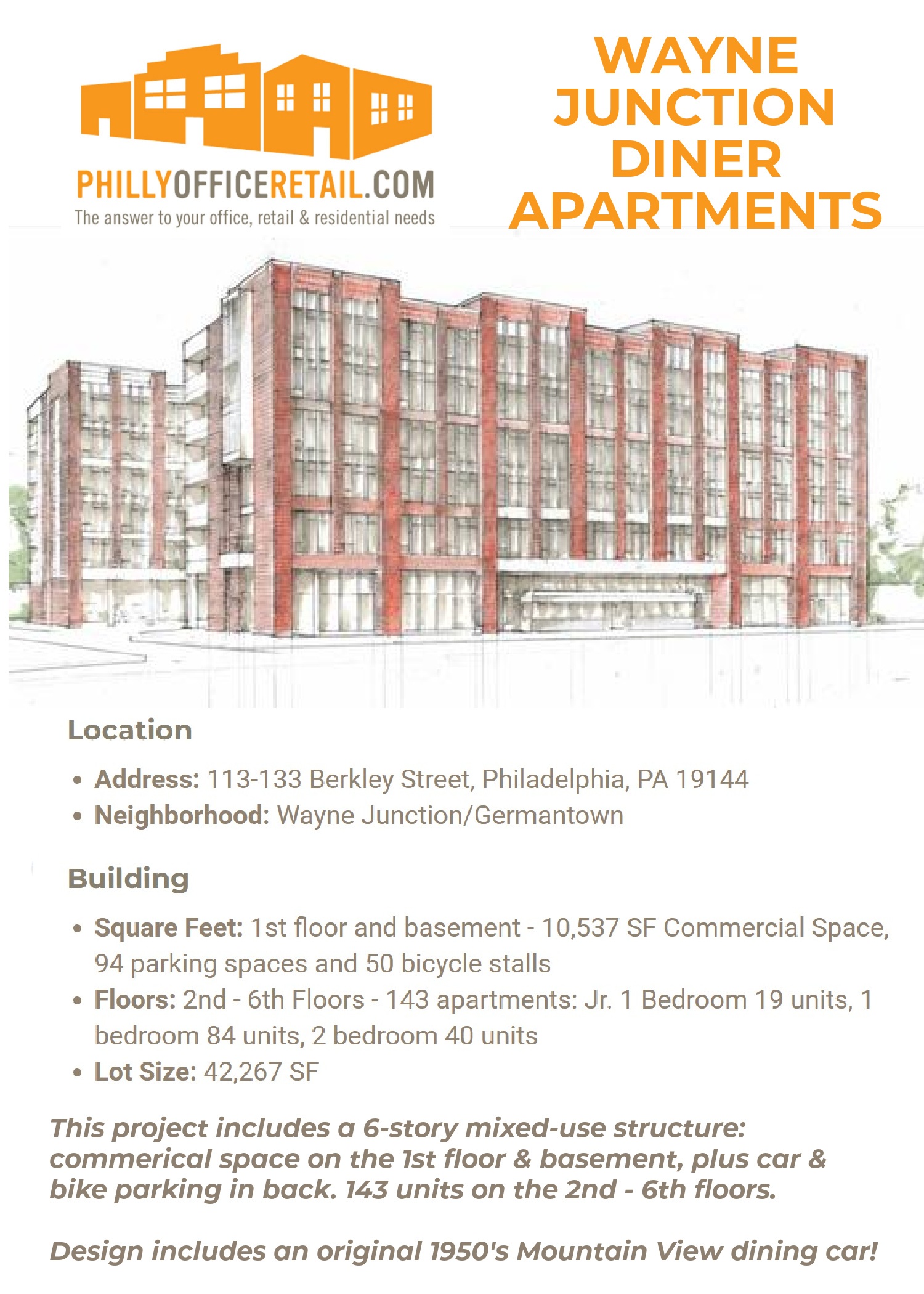 And it will finally return the dining car on the site to its intended use as a restaurant.

Weinstein had moved the 1950s Mountain View dining car to the vacant lot at 129 Berkley St. when he officially announced the Wayne Junction project in 2017. His original plan had called for the diner to reopen as a freestanding restaurant on the lot, channeling the old Wayne Junction Diner at Wayne Avenue and Berkley Street.

Weinstein had to scrap that element of the original plan, though. “We just couldn’t make the numbers work,” he said. It would have cost too much to excavate the loose rubble the City left behind when it demolished the Van Stratten & Havey steel mill that sat on the site and replace it with fill stable enough to support the dining car.

To make this project work, Weinstein also demolished a two-story former push pin factory on the lot at 113. He will then excavate a new basement on the two lots, making it possible for the diner to finally be reused.

That basement will contain 4,800 square feet of ancillary commercial space, residential storage and a 49-space parking garage for building tenants. Visitors to two businesses next to the site, Attic Brewing Company and Deke’s Bar-B-Q, will be able to use 44 parking spaces on the ground floor behind the commercial space.

“We always knew we would do new construction eventually,” said Weinstein. “But we started with restoration of the historic buildings to make sure that our game plan was going to work.”

The Berkley Street businesses have been well received. “We are pleasantly surprised at how well each of our tenants are doing in Wayne Junction,” Weinstein said. “It’s clearly attracted lots of attention and customers.”

The craft brewery and the restaurant are two of four commercial tenants who have set up shop along Berkley Street so far. Merzbacher’s Bakery, a producer of artisan breads, occupies the two-story building at the corner of Germantown Avenue and Berkley Street, and Fourfront, a digital marketing firm, occupies the factory-turned-office building at 137 Berkley. (Attic Brewing’s brewery occupies this building’s basement.)

Reaction from neighborhood residents to the project was generally but not uniformly positive. Weinstein had a virtual meeting with local registered community organizations on Dec. 15 where, he said, “we had a lot of supporters who were excited that we are adding apartments next to a major train station and that we are bringing vibrancy to the Wayne Junction neighborhood.” But, he continued, “as with any project in Philadelphia right now, there are nearby residents who would like us to include more parking, even though we’re close to a train station. And they would like us to have less density.” 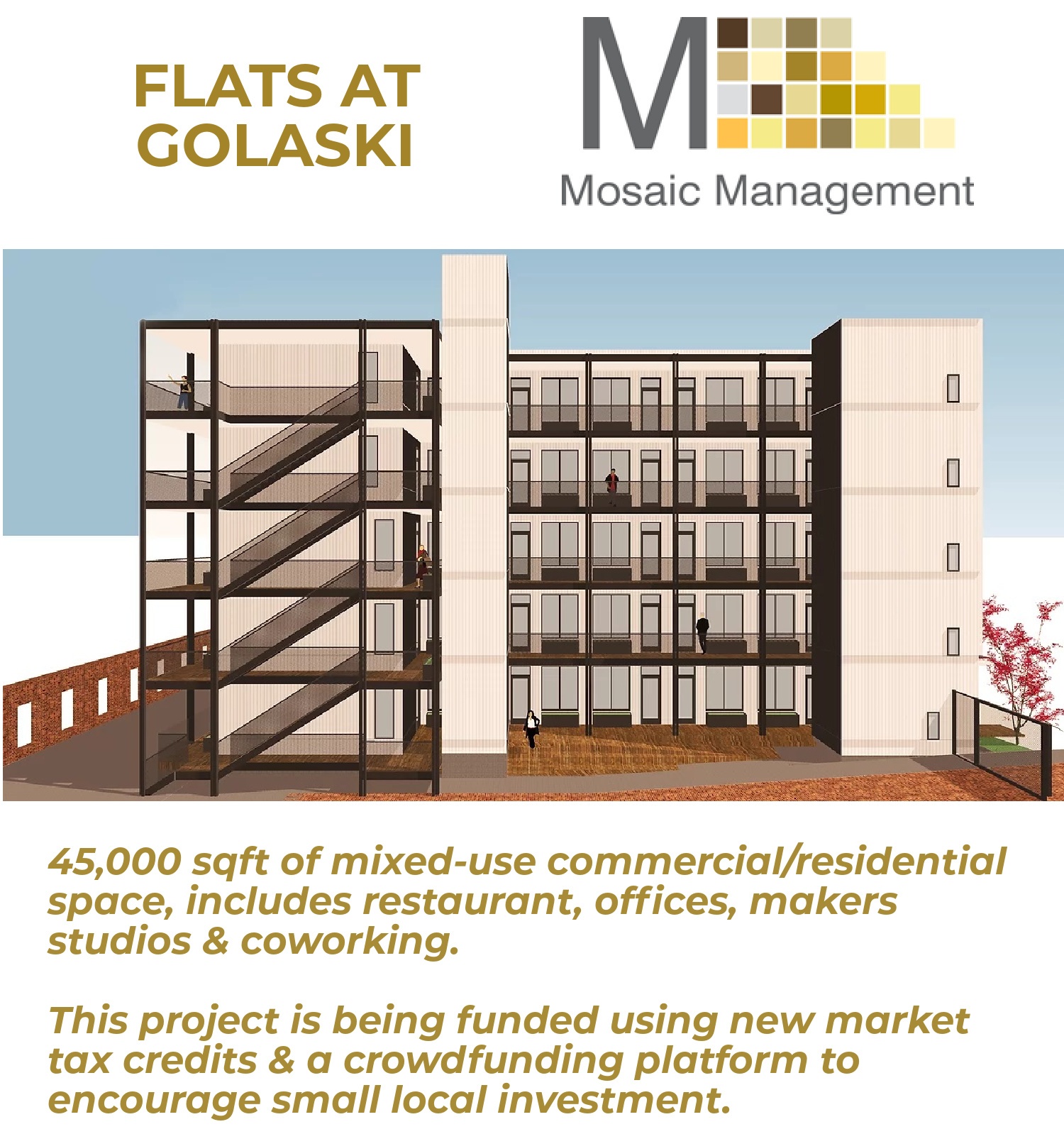 The building, dubbed the Wayne Junction Diner Apartments, is the second residential project at Wayne Junction. Mosaic Development Partners is putting the finishing touches on the Flats at Golaski, a mixed-use project at 4537 Wayne Ave. that combines a repurposed Golaski Labs with new construction. The project includes community co-working space, 25,000 square feet of commercial space and 35 apartments.

This project is large enough to require Civic Design Review, which should take place early in 2022. After that, he expects to break ground on the building in mid-2022 and open its doors to patrons and tenants one year later.

But before work begins on this building, Weinstein will begin rebuilding the Arguto Oilless Bearing Company building at 147 Berkley and the three-story building next to it, both of which had been owned by The Church of Philadelphia. Weinstein had sought Act 135 conservatorship for the bearing factory near the start of the Wayne Junction project, but, he said, “we were able to reach an agreement with the church that had purchased the property.” A cafe has already signed a lease for street-floor space, bringing another neighborhood draw to the street. The upper floors of the three-story building will house offices. 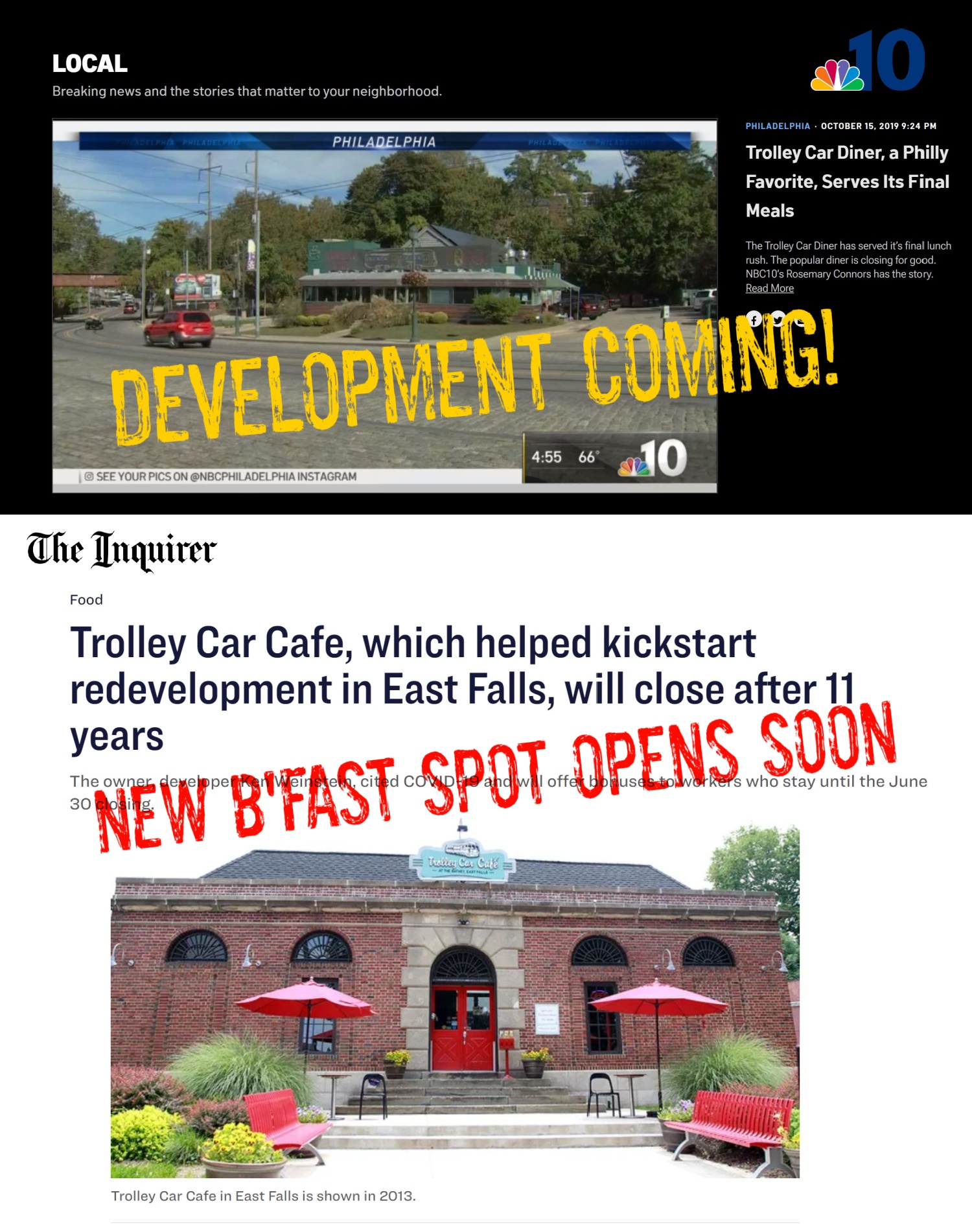 Ken’s a big developer now, but more neighbors probably know him from his popular restaurants, Mt Airy’s Trolley Car Diner and its sister Trolley Car Cafe in East Falls by the Schuylkill River Trail. Both restaurants have closed (the Diner in 2019 and the Café in 2021), and both are being reborn this year. Look for a 5-story apartment building where diner used to be, and East Falls is getting a new lunch and breakfast spot at the historic Bathey once again.

About Sandy Smith 11 Articles
Sandy’s interest in journalism stretches all the way back to high school, and he’s been scribbling away ever since then, either in the field or in its hired-gun cousin, media relations. He currently runs the Real Estate & Home channel at Philadelphia magazine's website, phillymag.com. You'll find his column on trends in real estate and design in the print edition. Cities and the built environment float his boat, as does rail transportation, and he’s written about all of the above for Philadelphia-area media and beyond. His work has also appeared in Next City, The Philadelphia Inquirer, Hidden City Daily and several other regional publications. Sandy is a Kansas City native who currently lives in East Germantown. Follow Sandy on nwlocalpaper.com and social media -- Twitter: @MarketStEl Facebook: WriterSandySmith