The fight ain’t over when it comes to a new 185-unit proposal for Ridge Ave in East Falls. Not in the courtroom — where a longshot of a lawsuit was filed in December by East Falls Community Council (aka EFCC, a registered community organization) to overturn the ZBA’s approval of the project — and not on Facebook, where neighbors tussled about the proposed development after a pic of a local newspaper article was posted with the simple comment “why is the EFCC so anti-development?” 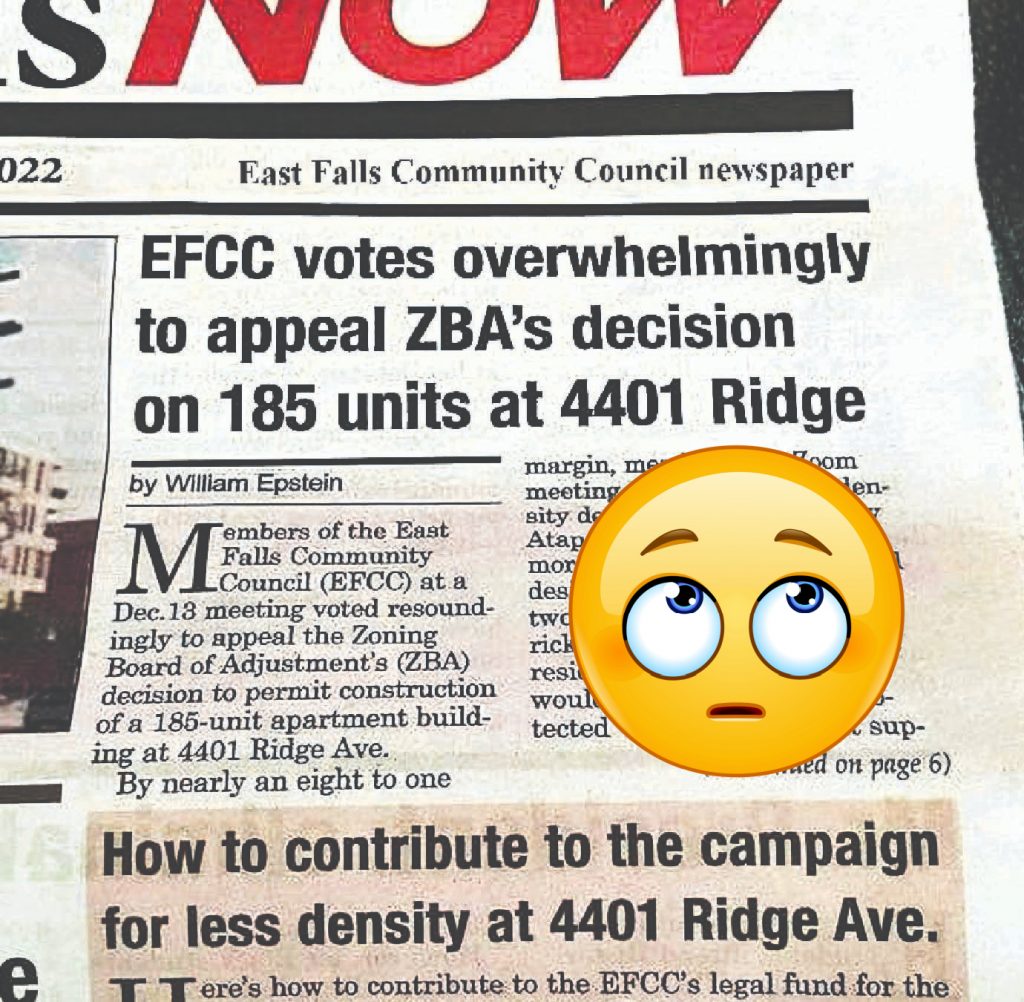 Adding to the high stakes that come with a famously low success rate for such lawsuits (which just got lower with recent news that the Philadelphia Housing Authority — original owners of the property — joined the suit in support of the ZBA’s approval), the EFCC leadership has asked its membership to help fund the legal effort, which has already consumed a significant portion of the organization’s already tight budget.

Keeping Up with the Jones
EFCC has complained in recent meetings about the lack of support from Councilmember Curtis Jones Jr. in their fight against the development, but it seems to us he would’ve had to approve the sale of the Ridge Ave property in the first place. As we understand it, councilmanic prerogative gives him full control over the sale of public land in his district (as well as all zoning), which the Ridge Ave parcel was before it was sold to Atapco. So what gives? Will Jones meet with EFCC officers, as his rep at a recent meeting seemed to indicate? And what comes out of that, especially with PHA on the other side of the suit? Stay tuned….

From the “Have an East Falls Life” Facebook page

Erin C.
This newspaper (i.e. The East Falls Now) kills me. There’s a tiny sentence at the end of that article that says East Falls Forward and EFDC support the project. Asking neighbors to contribute their own hard-earned dollars to go against a project that many in this neighborhood support, is so strange to me.

Steve F.
Erin C. Also crazy to imagine how much they’ll need, since the lawyer they enlisted has already told them (at least in the last EFCC zoom call) that there will likely be a “couple appeals” needed to have a shot of overturning the ZBA decision. (They’ve already paid him $10K to represent them at the ZBA hearing, which they lost, and I believe another $5K to engage him for the lawsuit.) Haven’t checked hourly rates for lawyers recently, but it seems like it’ll be a hefty bill. At a time when the EF Fridge has been consistently emptied by those in need, maybe there are other, better causes they could be funding?

Jake M.
*anti-over-development? I’m all for building but another 185 units along that stretch of Ridge, on top of the Rivage site, seems like it would be a nightmare? Also, when was EFCC ever pro-development?

Lou C.
It’s called OVER-development. There’s nowhere to drive or park, which is a clear sign to stop building.

Joe J.
Lou C. When/where do you have trouble driving in EF? Also….parking is a non issue at that location. Nowhere to park currently, and I find it very hard to believe that people would park 1/4 mile away in EF proper and walk to that site.

Lou C.
Joe J. haven’t you ever noticed the congestion getting into and out of the neighborhood? You know, the stand still traffic leaving in the morning, and after work coming in? This only makes it worse, adding an unknown amount of extra vehicles to an already extremely terrible traffic problem.

Melora J.
Getting out of EF in the morning is a mess during the week. Traffic flow definitely needs to be addressed especially at Ridge and Calumet.

Eric C.
Melora J. What still boggles my mind is that the city can’t engage in the simple act of putting in a left turning arrow from Ridge onto Calumet…

Erin C.
Eric C. I think a turning lane is being built there with the new development, which will be great!

Steve F.
Erin C. Yep, right turn lane with the Rivage project. Now if we could get the parking lane heading westbound designated no parking during
rush hour…

Matt B.
Nimbyism is the enemy of progress

Corey W.
Just so many 1 bed units being built. More 2 and 3 bed units could accommodate small families that attend school, daycares and possibly put down roots in the community.

Erin C.
Corey W. young couples looking to put down roots DO rent 1 and 2 bedroom apartments. They need to start somewhere and these buildings allow for that.

Corey W.
Erin C. totally agree. I’m saying maybe 70% 1 bedroom units instead of 95% 1 bedroom units. I haven’t done an actual calculation but that’s my perception of many of the projects now under construction

Adam F-S.
Erin C. Yes! But they all have 2 cars and no parking for them.

Aj B.
Maybe they should fix the road there before they try and build more apartments🤷

Sarah M.
Aj B. I feel like this is the chicken or the egg. The construction has totally torn up Ridge, especially this part of Ridge, as they had to put in new pipes. But what would be nice is if they fixed the roads once they are actually DONE with construction! We can dream…

Carolyn S.
Sarah M. Complete repaving IS on the schedule after all of the below grade stuff is completed.

Sarah M.
Carolyn S. thanks for the follow up! There’s just so much development on top of development it never seems to happen.

Carolyn S.
Sarah M. Believe me, I know. I started getting interested in urban planning and got “involved” in neighborhood efforts to jump start the commercial corridors 25 years ago; Every time we would go into some city agency to ask for design or technical help, they would say, “you don’t need us…you’re doing great, just keep doing what you’ re doing…it took Manayunk 20 years”. Well, ain’t THAT the truth! Now, a lot of the ideas proposed in EFDC’s 1998 Riverside Master Plan have become part of PCPC’s ‘Philadelphia 2035, and PP&R’s East Park Plan. The work on Ridge HAS to be done to replace failing water mains, stormwater and sewer lines; the construction is a WHOLE lot better than sewage pouring out of your faucets after a heavy rain. The new infrastructure being constructed by the Developers in the 4300 block will eventually help to get ahead of nature and the breakdown of over 100 years of deteriorating pipelines and cabling.

Gerard P.
185 units is a large development that would increase traffic exponentially on an already overtaxed two-lane road.

The Local
Gerard P. should we be building to better accommodate people or traffic, though? Serious question. We’re under the impression that Philly’s population is growing and the need for housing is dire. Traffic is one of those things that can adapt, as people find new routes and/or rely more on public transportation. Perhaps we should spend our efforts now advocating for better alternatives to cars, rather than fighting development?

Gerard P.
The Local The issue I have is with the size of that project on that specific site. There are already two existing apartment buildings on that block of Ridge Avenue and one currently under construction. None of those are in easy walking distance of a commuter hub. You can’t easily walk to the Wissahickon Transportation Center (It’s a fifteen minute walk away and the City Avenue off ramp has to be negotiated) East Falls Station is closer (10 minutes) but the walk is uphill. I just think that given those limitations a lower density development is what’s called for on that site.

Sandy Y.
The Local Perhaps we should look at rezoning all of the vacant office buildings in Center City if we really need to accommodate new residents. Otherwise, let’s keep a few trees before we find ourselves in the pages of the Lorax book.

Carolyn S.
That whole area (Kelly, Calumet, Ridge) is being redesigned. The City (and State) are working w/the developers and community groups to resolve rush hour traffic congestion, frightening acceleration and speeding when people shoot onto Kelly and Ridge from the Manayunk/Roxborough direction, safer pedestrian/biker access to the river trail w/extra turning lanes, changes to traffic light sequencing, better signage and lighting, addition of sidewalks and on-street parking on the north side of Ridge between Calumet to Schoolhouse, easier access to public parking and improvements to rush-hour egress from residential developments. These things take a LONG time, what with the need to upgrade obsolete and inadequate underground infrastructure BEFORE implementing changes at street level.

Suit Yourself
Plenty of strong opinions on both sides of the issue — just as there are groups on the other side from EFCC over the Ridge Ave project (East Falls Development Corporation and East Falls Forward — East Falls’ “other” RCO — both support it).

Despite the long odds, EFCC seems committed to their course of action. As of this writing, they’ve formed a “task force” to raise money and coordinate their legal effort. For those keeping score at home, this is the second lawsuit they’ve filed recently (the other is on Division Street, over a proposed development).

Instead of fighting development piecemeal, and wasting thousands of dollars on lawyers, it’d be great if EFCC could reach out to all neighbors with an innovative proposal that irresistibly highlights our scenic, historic riverfront while easing parking & traffic woes. A unified effort — one that draws on the voices and expertise of all East Falls groups — is always better. United we stand and all that.

Given recent flooding on our waterfront (likely to get worse with climate change), perhaps there’s a chance to re-envision business as usual when it comes to local development? Check out our “Community Chest Thumping” article for more info.

7/19 Aggravated assault 3732 Midvale Ave.  6:52PM Complainant got in a verbal argument over a parking spot at location with male. Compl stated the male said “he will break her fucking jaw and her boyfriend’s.” [more…]