We get a lot of flack for being “pro-density” but I think it’s more accurate to say East Falls is pro-density. As a newspaper, we support the rights of residents to determine what happens where they live. We feel strongly that everyone deserves an equal voice – not just those with time & money to participate in local politics.

For the last 20+ years, whenever City planners and other organizations have held public meetings, surveys, charettes, workshops, etc, in East Falls – targeting wide demographics, often thru many phases – locals have consistently and very specifically insisted we wanted a “walkable” neighborhood with food, entertainment and other amenities concentrated in a “riverfront business district” at Ridge and Midvale Avenue. We’ve asked to be connected better to the “Wissahickon Gateway” here as well.

In 2014, East Falls and surrounding neighborhoods signed off on the Lower Northwest District Plan, part of the City’s award-winning Phila2035 comprehensive plan for growth and development. The theme is “Thrive, Connect and Renew” and in our area, the goal is to “fill in” undeveloped land on Ridge from Merrick to the Bus Transfer station, which will be getting a full overhaul. Meanwhile, projects like Atapco/4100 Ridge — which got the ZBA’s green light November 3rd — fit into the plan like a Lego snapping into place: 185 units brings hundreds of people to the area who will need shopping and services.

But that also brings traffic and congestion. Parking problems, tax hikes, noise, crime, maybe, shady contractors, who knows? It’s scary, all this change. We feel you. We kind of even agree with you – however, we have a big problem with a handful of neighbors disregarding the City’s democratically created plans in favor of their own arbitrary preferences.

A mere nine EFCC members are behind an upcoming vote to appeal the ZBA’s approval for the Atapco proposal, which btw already has support from East Falls Development Corporation as well as East Falls Forward (the neighborhood’s other RCO). True Story: Community Council’s 12-person zoning committee spent $10,000 this year trying unsuccessfully to block this project. And now they’re asking members to help them decide whether to proceed with more legal opposition.

And to pony up for the legal fees.

Which is why they called this Monday’s special meeting. “Throughout this process, there were only a few people who gave money to fight this, and I didn’t see any money coming from the near neighbors where this project is taking place,” said Joe Leube, EFCC’s treasurer, at the group’s last general meeting “I guess they’re not that concerned…” 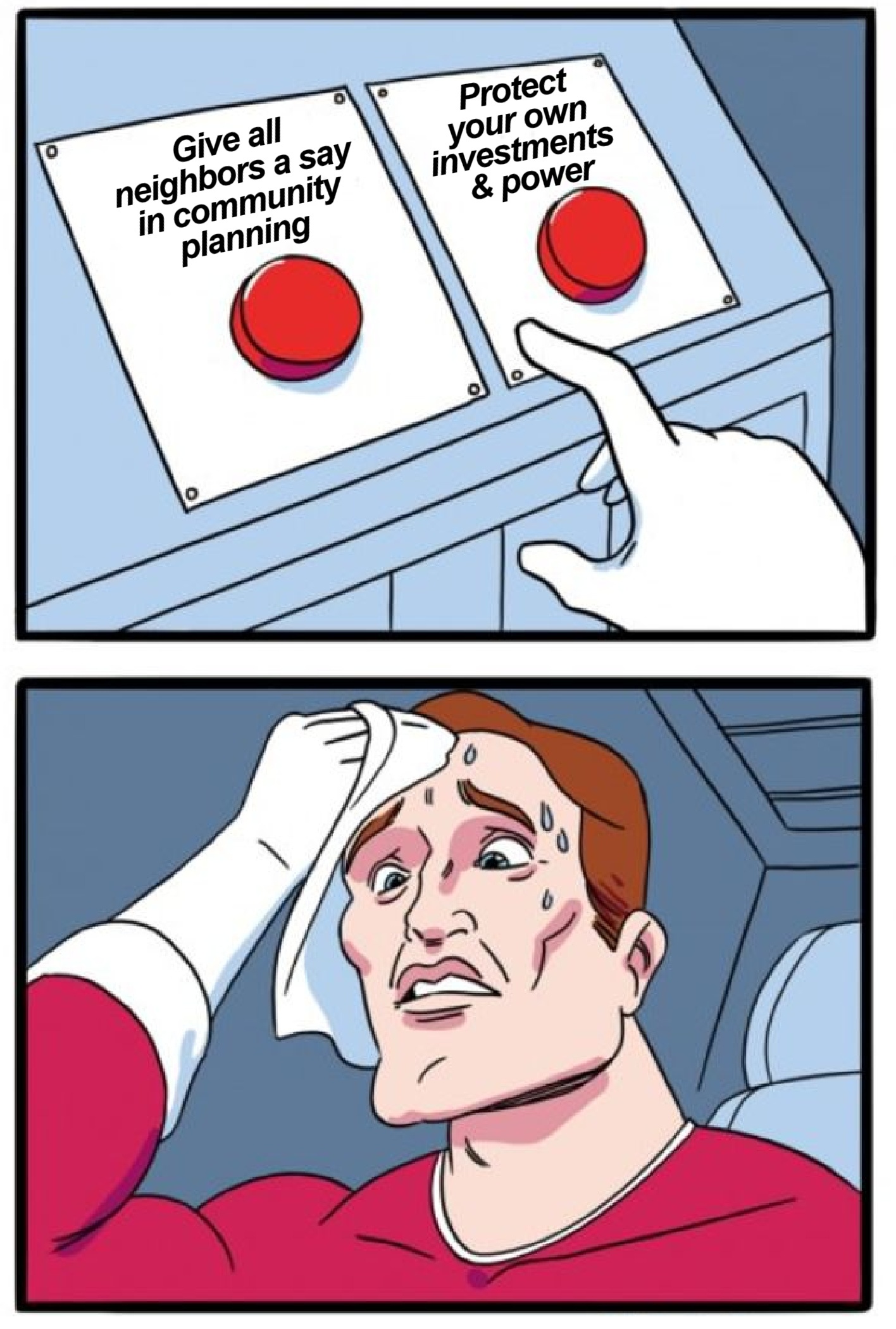 Is he even listening to himself?  Yes, Joe, it’s almost like people here actually want the shops and services they keep asking for. <face palm>

But the issue isn’t this one project. According to longtime Council member (and ex president) Meg Greenfield, East Falls’ very reputation is on the line. “If we do not pursue this appeal, we will be at the mercy of every developer. We will lose all credibility. And we will get trampled on..,” she insisted,  “If we fail to appeal this, we can forget it. There is no point in even having a zoning committee.”

Will somebody please tell East Falls Community Council that an effective zoning committee should do more than throw their weight around with developers? If they have a plan for the neighborhood, they should promote it publicly, educate neighbors on the issues, and bring us along as supporters. Instead of filing doomed & costly lawsuits, EFCC should focus their energy on following the civic process, like every other organization.

People here like to envision a bustling business corridor, maybe, because that’s what we see in other neighborhoods, and it seems to work for them. But East Falls is a unique area, with a mostly undeveloped waterfront and access to Wissahickon creek and park. What would it look like if we built on these assets?

Maybe Ida could be a turning point, where the community re-considers the wisdom of attracting business to a business corridor that is vulnerable to flooding? We’ve lost Major‘s and In Riva already. After Cop26, it’s clear that the extreme weather we’ve been experiencing lately will only continue and even intensify. Seems fortunate East Falls has another commercial strip on higher ground, Conrad Street, that might make more sense to develop.

A couple years ago, we published an April Fools column announcing that FEMA was condemning our riverfront district as a floodplain, which cancelled all construction permits and required the relocation of dozens of businesses. We explained how the move provided millions of dollars in stormwater management and land remediation funding, which could be used to turn the entire area into a public park with docks, a boardwalk, rental concessions and other amenities.

Of course, we were joking but the idea’s not so far-fetched. FEMA actually does offer a voluntary “property acquisition” program for areas of repeated flooding. It’s not a gold mine for property owners but it could be a start — other communities have used these buyouts to create recreational areas and wildlife zones that attract visitors, homeowners, pop-ups…  Green and blue space has real value, especially this close to the city. 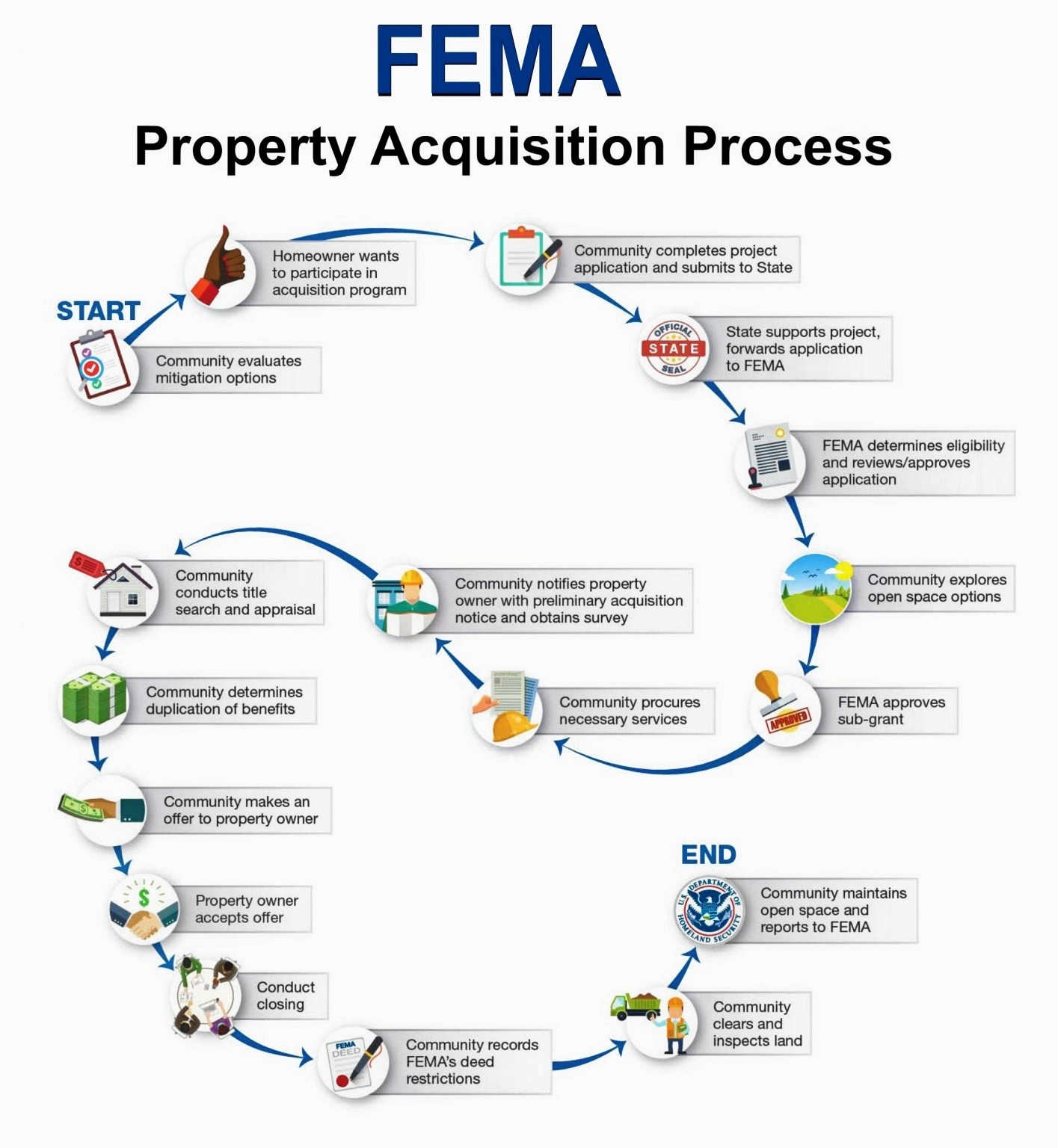 We’re just spit-balling, here. For now, the Lower NW District Plan represents the community’s wishes moving forward, which means Atapco deserves its ZBA -approved building permits. Neighbors who vote to try to reverse this decision are putting their own interests above those of the many citizens, institutions, business associations, city agencies, elected officials, etc. who worked together to adopt an inclusive, equitable plan for our community.

Instead of fighting development piecemeal, and wasting thousands of dollars on lawyers, it’d be great if EFCC could reach out to neighbors with an innovative proposal that irresistibly highlights our scenic, historic riverfront while easing parking & traffic woes. Who knows? The city’s plans might change, with good research and community support.

Until then, we call bullshit on contesting Atapco. One group’s vote should not override a whole public process that many hundreds of people worked on, over years of outreach and feedback. 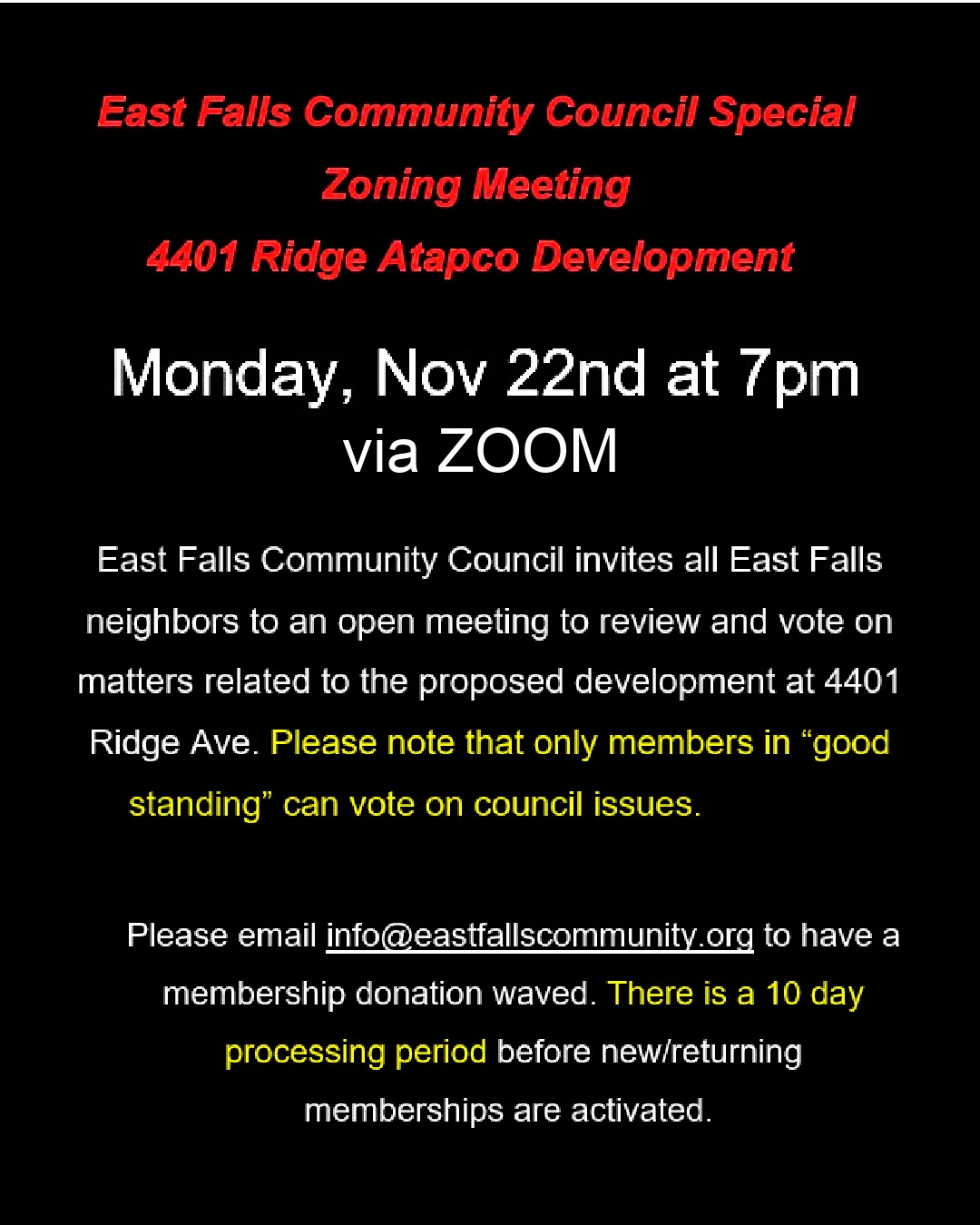 We’ll be watching Monday night, and sharing live on Facebook. To attend yourself, CLICK THIS LINK at the appropriate time. Note: only paying members are eligible to vote, and there’s no voting on the same day you join because of a fun new twist in the rules, a 10-day “processing period” (so don’t even think about stacking the room, lol).

GET INVOLVED! The Citizens Planning Institute introduces Philadelphians to the inner workings of city planning, zoning and development so they can help shape and preserve their neighborhoods. Every spring and fall, CPI offers an 8-week course that teaches practical tools individuals can use to better participate in City decisions that affect their homes and communities. Sign up for their newsletter and follow their very informative Twitter for updates on classes, workshops, committees and more.

GET MORE INVOLVED! East Falls Forward is a Registered Community Organization with a pro-urban mission that envisions a walkable, sustainable neighborhood with attractive places to eat, shop and do business. Democratic voting, free to join for all East Falls residents & business owners, sign up at eastfallsforward.org.

GET EVEN MORE INVOLVED! Email zoning@eastfallsforward.org to get all the latest new business and development information in real-time, before proposals are formally presented to the public. You’ll also be invited to EFF’s community discussion groups, where neighbors who enjoy civic process put their heads together over an endless variety of local issues. (You know who you are, if this is your thing.)

Thanks for your interest in healthy, livable communities. 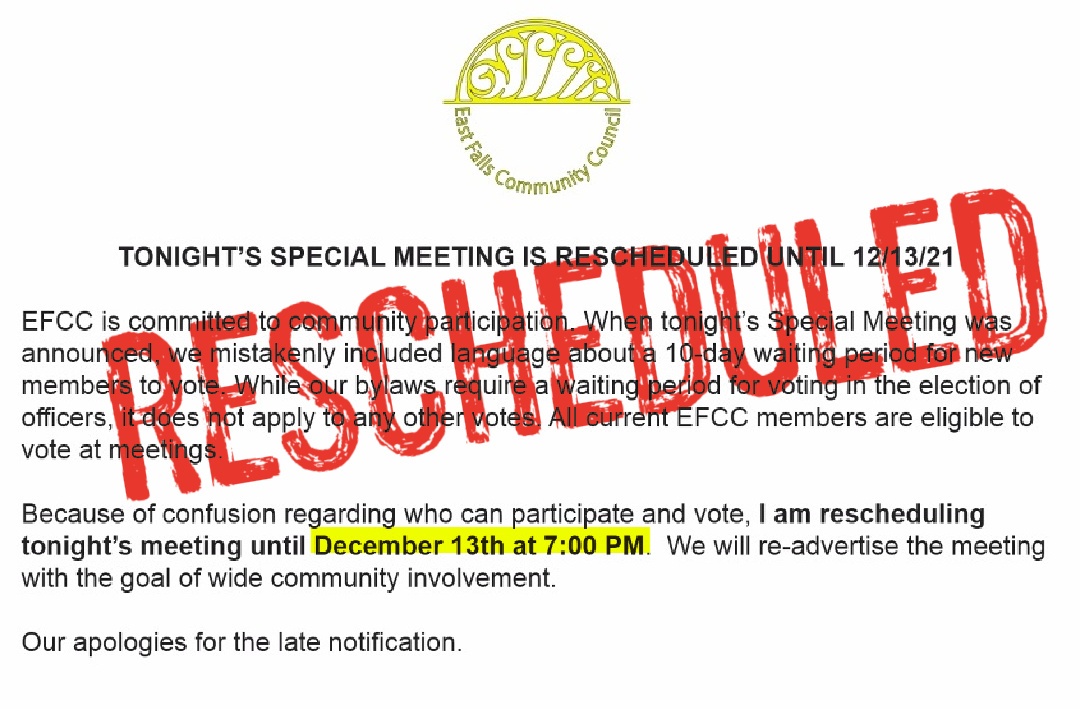 EFCC’s meeting scheduled for November 22nd has been cancelled (we assume, in order to allow more people to purchase memberships so they can vote); new meeting will be Monday December 13th. We’ll post a ZOOM link as soon as it’s available.

(from The Local’s page and the “Have an East Falls Life, Folks” community group.

I would absolutely love it if this entire plan got trashed. Enough high-density/multi family apartment buildings and poorly designed homes. We are losing our neighborhood! — Sandy Y.

You absolutely have a right to that opinion, and also have a right to organize other neighbors to ask the City to reconsider the Lower Northwest District plan that the neighborhood (including EFCC) agreed to in 2014.

The City is growing fast, so they asked communities where they’d like the housing that needs to be built in every neighborhood, to accommodate all the people moving here. Our area designated Ridge Ave as the best location for mixed use commercial/residential.

Regardless of how you feel personally about the Atapco project, there’s no disputing that it “fits” the Lower Northwest District plan neighbors approved thru a series of community meetings, workshops, feedback sessions and surveys directed to a diverse swath of residents. As far as inclusive, democratic plans go, it’s not perfect of course but it’s the best we have.

Thank you for your comment, we agree that this sort of development can really change a neighborhood, and affect a lot of people. There’s a lot at stake. I guess that’s why it seems wrong to leave this decision up to a very small vote that people have to pay to participate in. 🤷  — The Local

I am so confused. Didn’t people vote yes for this and the zoning board granted the variance? Why must this continue to be fought by 4 individuals? EFCC’s handling of this is an absolute disgrace. Time to stop beating a dead horse and stop speaking for the entirety of this neighborhood. It’s embarrassing. — Erin C.

Do large apartment complexes = walkability? Even if there are private businesses/shops/stores on the ground floor? If they won’t build unless they get a large apt complex to go with it then is your main concern walkability or giving into business interests?  — Chuck G.

I think the main concern is the “deadness” of that part of EF, which sucks cause our riverfront should be more vibrant — at least, that’s what neighbors want.

Whether we like it or not, Philly’s population is exploding and the city has to put people somewhere. Perhaps surprisingly, this project isn’t even as big as the property is zoned for!

What does it for us is that the neighborhood quite recently approved this part of Ridge Ave for high density residential & commercial. This project fits the plan. If EFCC wants to organize neighbors about re-visiting the plan, we’re all for that but the process needs to be public and inclusive, none of this “only members in good standing” crap, lol.  — The Local

A compromise with this local developer could be a big win for the community. [more…]

An old dream rekindles at the last EF zoning meeting, as a new one begins on Scotts Lane. And one doozie of a rumor for Midvale!  [more…]