Neighbors seemed almost too shocked to react following an early March “emergency meeting” in which the City (acting with FEMA) announced plans to condemn East Falls’ riverfront business district as a floodplain. The move effectively cancels all local demo & construction permits, and may mean the relocation of dozens of residents and small businesses along Ridge and Kelly Drive.

With photos and short video clips, Greebler along with other civic leaders outlined plans for East Falls’ new designated flood zone, roughly an expanse from Falls Bridge Lofts to In Riva restaurant —  stretching from the southside of Ridge Avenue to the Schuylkill. “This is just a framework, “ Greebler explained, “We’ll fill in the details as we gather more community input.” Falls Bridge Lofts, the fire station & post office will “most likely” be included in the flood zone, which basically will become an enormous swath of green along the river, dotted with plantings, water features and recreational zones.

The historic Mason’s building will be restored (and fitted with automatic floodgates) for use as a Visitor’s Center. The entire length of stone steps along the river is also slated for restoration, and in addition a new multi-use trail/boardwalk will be installed along its length “to provide a more intimate experience with the river.” Improvements include a public dock/pier at Midvale avenue and a multi-vessel water landing/rental kiosk across from historic Castle Ringstetten, which is being acquired by Jefferson University’s Department of Architecture and relocated by the Neutra House. 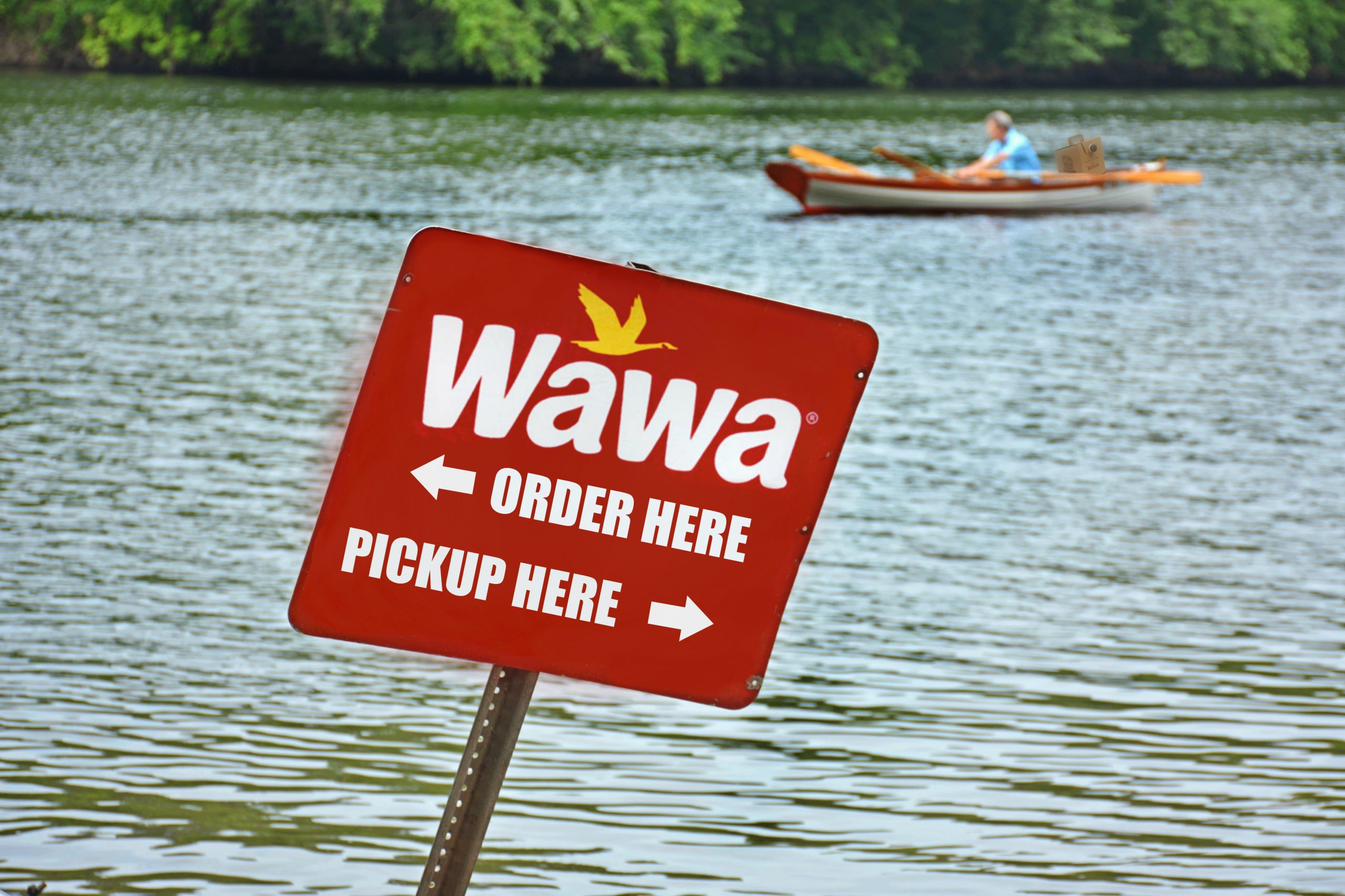 Wawa has submitted a proposal for an “innovative and sustainable retail and refueling plaza” at this end of the flood zone, including the first aquatically-accessible convenience store in the state. Meanwhile, the OPS has cited both our existing gas stations as security and environmental hazards “requiring immediate and permanent intervention.” FEMA expects to negotiate the buyouts this summer, at which time excavation/removal of the old gas tanks can begin and the area will be prepared for rehabilitation by winter.

This first phase of the project is also the most massive, and will require “considerable” traffic re-engineering around the de-contaminating zone. Exactly what that means, though, is anyone’s guess at this point. “We’ve got the best advisors and consultants in the industry, we’re looking at every possible solution,” Greebler assured the crowd, adding that the OPS will be setting up a temporary office at 4300 Ridge Avenue to address neighborhood feedback promptly and in-person.

Ironically, that’s right where Grasso was just getting ready to build that 5 story mixed-use building East Falls has been waiting on for decades. “That is unfortunate,” Greebler admitted, “But no matter how much the community wants development here – there’s no value in building, if it’s only going to be flooded.” 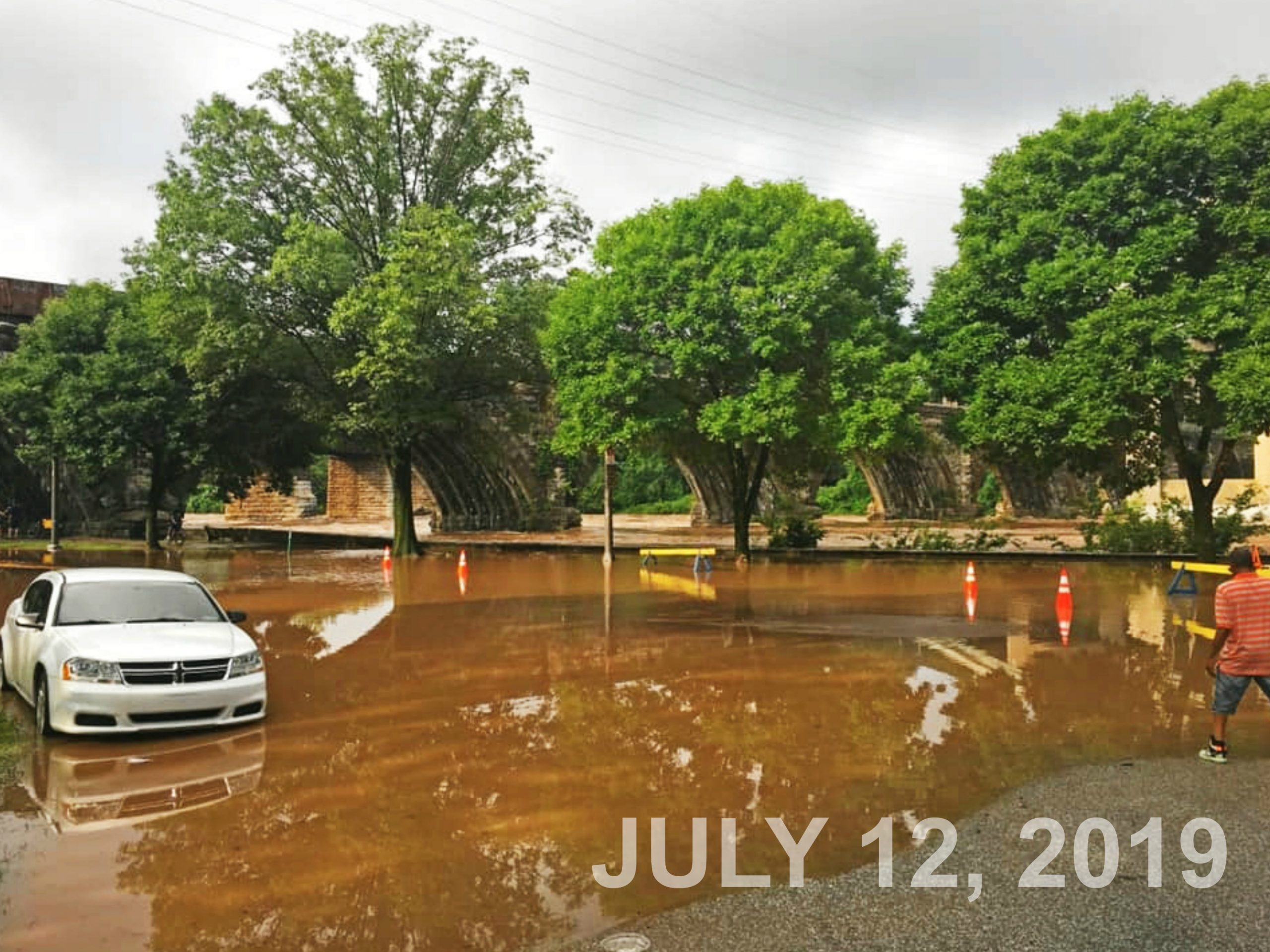 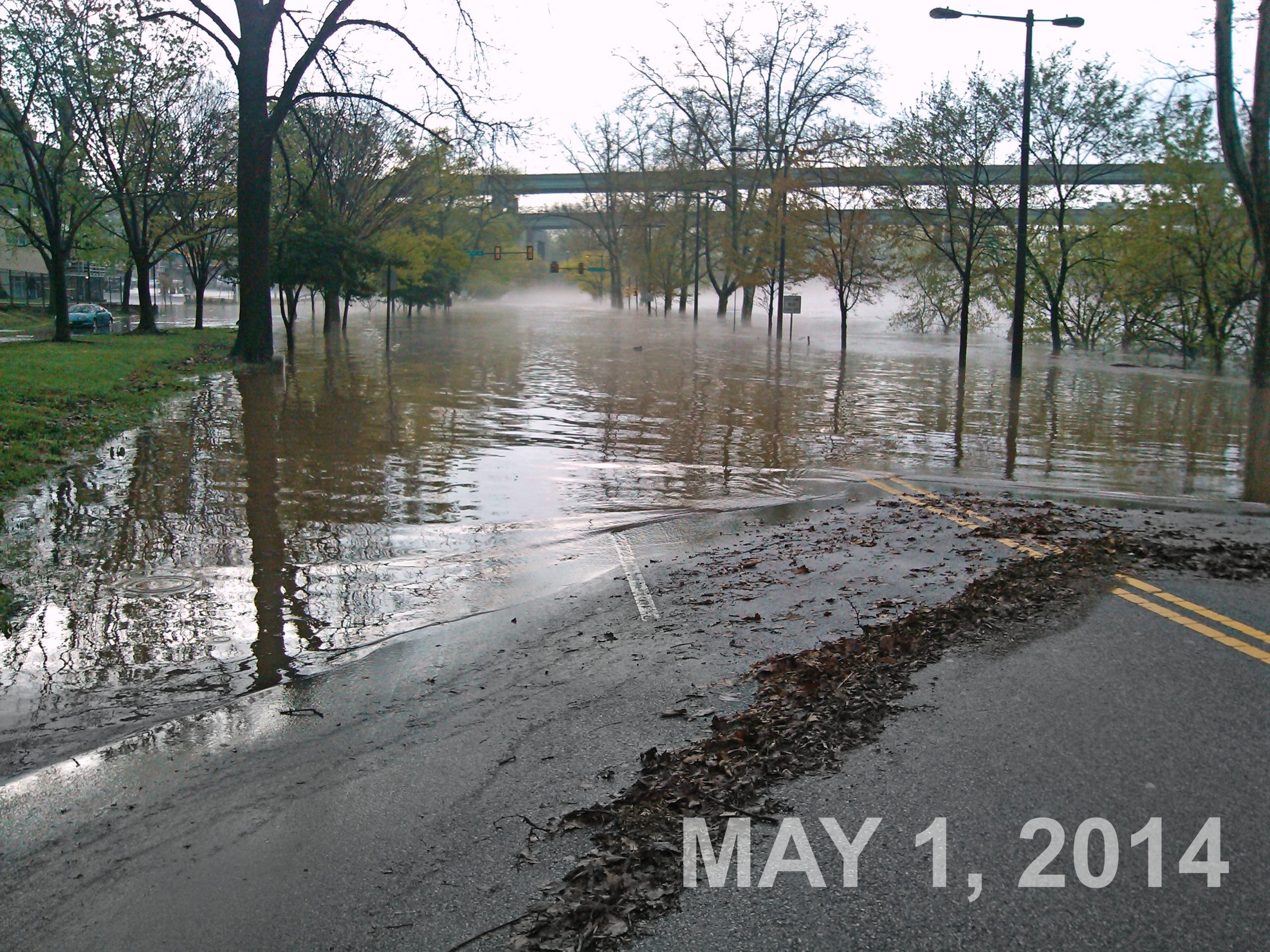 The City’s moratorium on new construction in East Falls Flood Zone has been in effect since March 2nd; in addition, all building permits and variances now require OPS review. “We understand FEMA will be aggressive in purchasing homes and businesses to turn over to OPS, PPR and other City agencies as resources and responsibilities become better defined.”

Greebler urged neighbors to “imagine the possibilities” rather than mourn the loss of a “flaccid” commercial corridor that “probably isn’t even necessary,” given the boom of commercial development in nearby Allegheny West. “Seriously, wouldn’t you rather have a nice big park on the water anyway?” he asked aloud numerous times, pointing out that property values for Ridge Ave rowhomes “will shoot through the roof” while “teams of tourists and city dwellers” will “flock” to the Falls as a unique riverside recreational destination.

In addition to community greenspace, there could be fountains, koi ponds, botanical gardens, an amphitheater. “There’s a lot of area to cover, you could fit all kinds of shit in here!” Greebler exclaimed, “Now’s the time to brainstorm, to start having those conversations: ‘How many dog runs?’ ‘Where do we put the skate park?’ and ‘Is this a good spot for a zipline concession?’”

Public meetings are scheduled to begin “sometime in spring” and meanwhile neighbors are asked to submit comments/questions through the form on the OPS website, where you could also view plans and official documents if this were a real article. But it’s not, we totally made it all up.

APRIL FOOL!! Had you going there, though, didn’t we? But is the idea really so far-fetched?

FEMA does offer a voluntary “property acquisition” program for areas of repeated flooding. 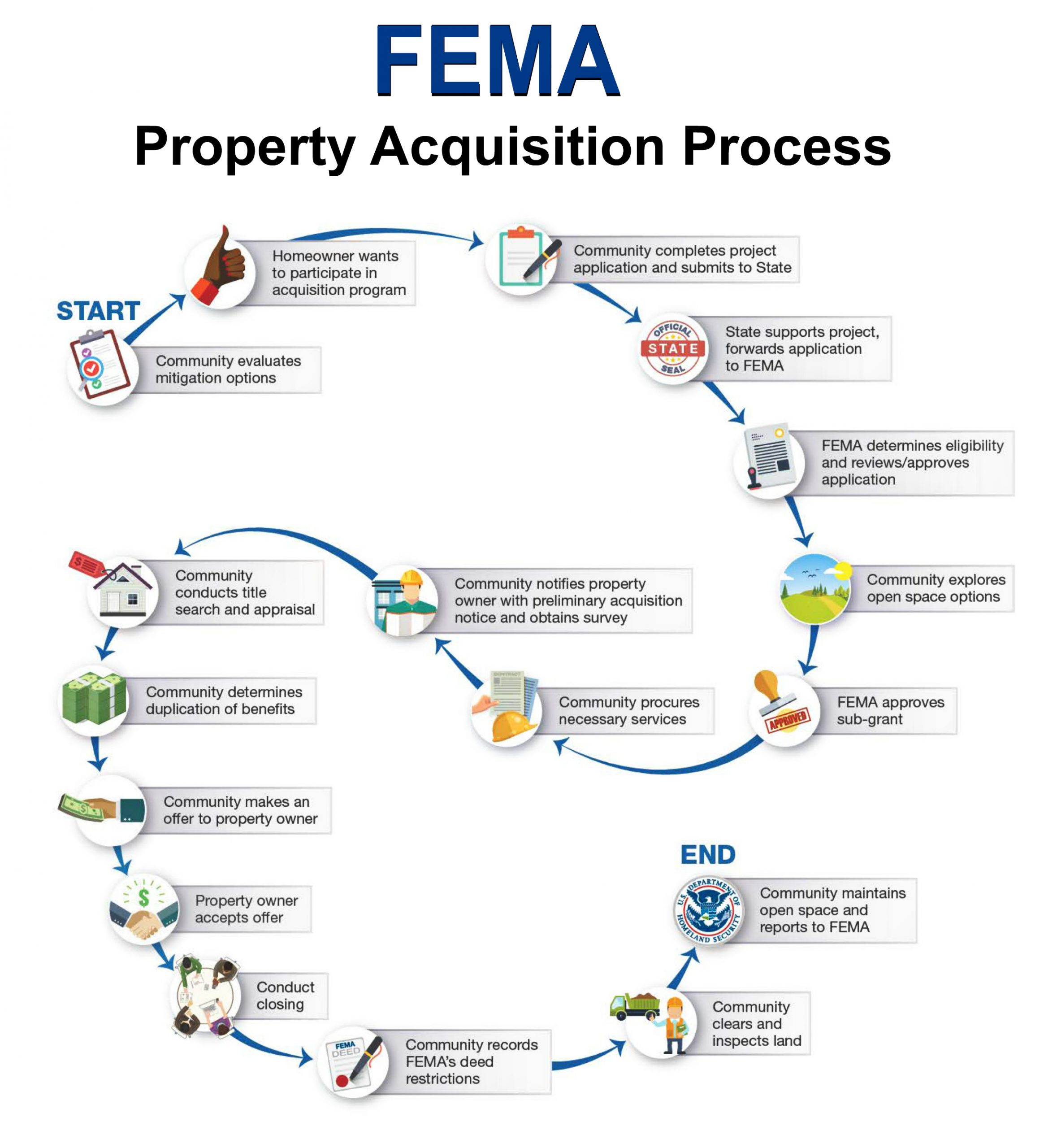 Just sayin’ — this idea might not be as crazy as it seems, other communities are using FEMA buyouts to create more open public space.  Looks like you don’t need a traditional commercial corridor for a vibrant local economy and in addition, open green (and blue!) space contributes to a community’s overall well-being physically, psychologically, emotionally… It’s hard to think of a way that open green space doesn’t benefit neighbors.

Ya never know….. Perhaps instead of fighting all this mixed residential/commercial development piecemeal, East Falls could consider coming together on an innovative, equitable plan for our neighborhood’s defining asset: our scenic, historic riverfront. It could happen, right?

Tattoos Are People Too

Ouch!  A reader asks why we’d cover a “dubious and dangerous” enterprise as Frequency Tattoo Company on Ridge. We rush to the defense of John Howie & his talented crew — and tattooed people everywhere (many we [more…]