Go? East Falls sees signs that a highly-anticipated project might be ready to begin.

After years of hints, rumors and a premature announcement or two, pics surfaced on East Falls Rants showing – could it be? Actual construction starting on the long-dormant “Rivage” site aka giant ugly parking lot by the Falls Bridge?!

Although it turned out to be only Philadelphia Water Department workers removing underground pipes, seems they were at least prepping the site. And it was enough to get locals buzzing!

So far, it’s been almost a month and we’ve seen no further activity. Boo. This January, EFCC announced that Grasso has told them he could start demolition of the property’s squat concrete building “as early as February” but don’t hold your breath. He told them back in August that construction would begin before the end of the summer, d’oh! (Can’t be a good sign that the asphalt PWD tore up was covered right back over.)

Still. Don’t blame us for getting excited: this $70+ million project could transform a sad, stagnant space that’s been funking up our riverfront for almost two decades. Four stories of apartments with ground floor commercial (five stories total) including plans for a small grocery, café/restaurant and even an Indego bike share station. Potentially, this could be a real game-changer for our flaccid business corridor.

Also: art! As per the City’s Percent for Art program, the structure’s long wall facing Kelly Drive will feature an art installation that helps visually and aesthetically connect this new architecture with the community’s history and natural beauty. TRUE STORY: East Falls’ mosaic maven and community visionary Trish Metzner has thrown her hat into the ring with other talented Philly artists for this esteemed commission valued at almost $300,000 (1% of construction costs). GO TRISH!!

Jason A. Howie‎ (to East Falls Rants)  I can’t believe what my eyes are seeing!

Jermaine Jenkins What are we looking at? 👀🤷🏾‍♂️

Jason A. Howie Jermaine Jenkins construction finally starting at the site next to BP on Ridge and Calumet

Peggy Cassidy What is this??

Peggy Gertz Slowly, slowly, a few things appear. Then, for awhile, nothing.

The Local  “A straightforward wood frame construction. Instead of six stories at 80 feet high, the building will be five stories and only 60 feet – four stories of residential, with commercial on the ground floor. 142 units, down from 204 – with 118 parking spaces for residents as well as customers. There will be no underground parking. They still plan to include a café, an Indego bike station and also some sort of fresh market or grocer.

Entrances on Ridge and Kelly Drive (on Kelly, only right turns in and out). PennDOT is still requiring them to add a 3rd lane on Calumet (for turning) and one on Ridge (rush hour traffic, off-peak parking).”

The Local   “The project has a new architect now, KTGY Group out of the DC area…. Two voices going way back with East Falls’ Development Corporation chimed in about the wall proposed on Kelly Drive. “Didn’t that cut us off from the river that whole length?” board member Carolyn Sutton wanted to know.

Gina Snyder, former executive director (2001-2017) urged Grasso Holdings to be very mindful to build so that the parked cars are not visible from the street. And to work on treatments and plantings for the wall, to help break it up and make it look as green and attractive as possible.”

Jason A. Howie The Local thanks I didn’t want to go hunting for this 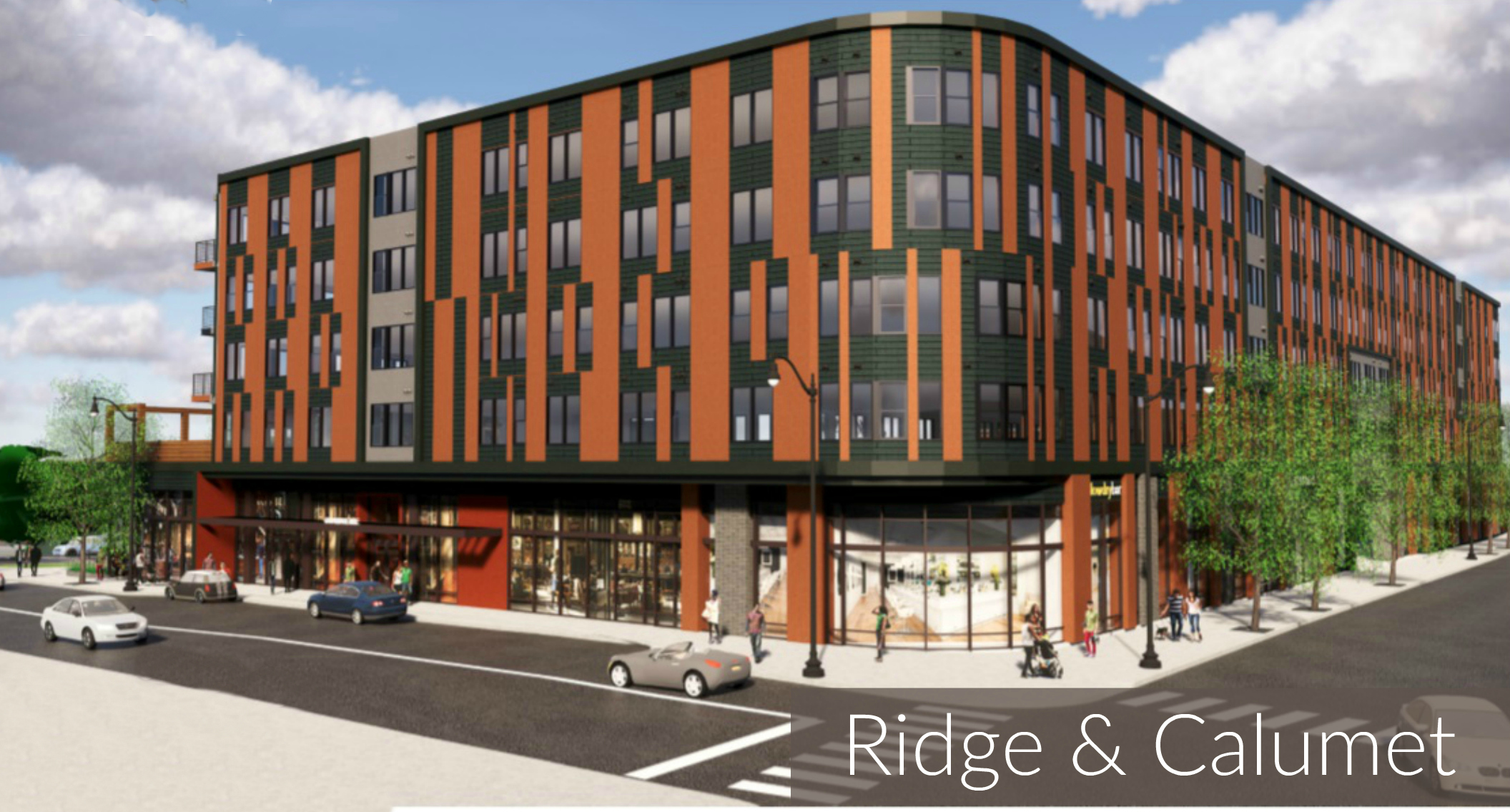 Brandon R. Warrick This is a good start

Ben Tyler Meltzer Something tells me they’ll be able to magically get the harassment at the gas stations around there cleared up by the time these puppies are done.

Jason A. Howie Hopefully BP will just invest in cleaning their store a touch.

Michael Malloy Is it really starting or is this some sort of testing?

Michael Malloy Joshua Pagan this non-Fallser has been waiting 12 years for development on this site. I hope this is is!

Paul Kleschick I broke wind, does that help?

Joshua Pagan Paul Kleschick it does

Rob Graham I was really hoping for a Wawa in that spot.

Michael Andrew Yeah, what we totally need is another gas station/convenience store on a stretch that already has two of those.

Rob Graham Michael Andrew so true, I’m glad they are using the space for something totally new in east falls. It’s about time we got some apartments around here.

Carolyn Card Sutton I stopped to ask; it’s the PWD locating and removing some pipes under the parking lot prior to start of work by the developer

Johnpaul Golaski Rob Graham it’s ground floor retail / commercial. At one point they talked about a food market….. but that was a few years ago, so who knows if that still applies.

Jennifer L Huber Rob Graham pretty sure some WAY better stuff is going in there on the “commercial” side of things.

Aaron Oliva Why is this exciting? A park would be far more useful.

Vince Novitsky III One of the largest urban green spaces in the country, Philadelphia’s Fairmount Park consists of more than 9200 acres of trails, woodlands and wetlands….AND YOU WANT MORE? 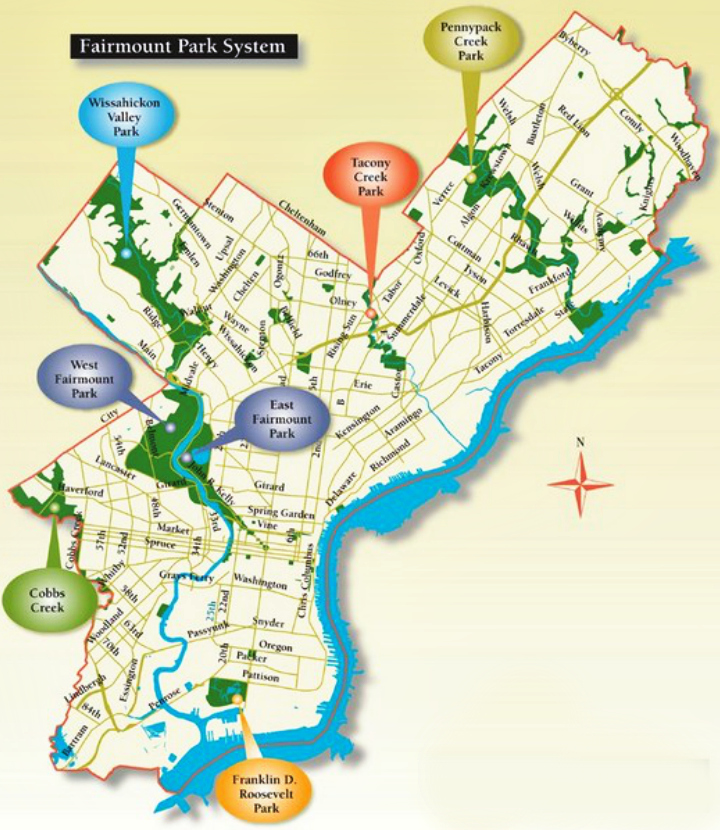 Carolyn Card Sutton Vince Novitsky III is right; East Falls is bounded by the Schuylkill River, Wissahickon Creek, Laurel Hill Cemetery; and acres and acres of parkland; we have open space, recreational trials, fishing, boating….a really unique connection to nature that is rare in urban areas. what we need is people living on Ridge, supporting local businesses and paying taxes. East Falls will be a healthier neighborhood with a dynamic mix of 24/7 activity geared to economic development, multi-modal transportation and self-contained sustainability.

Michael Andrew Honestly, as a parks and rec professional, I’d be OK with this NOT being more passive parkland, so long as they’re smart with the stormwater management on this site. (Green roofs, rain gardens, bioswales, permeable pavers, etc.)

What we really need is a civic space that also houses businesses. Like the Ardmore Farmers Market.

Lauren Varga King Aaron – there is a wonderful park just feet away (Inn Yard) or as my kids call it “The Fish Park.” I often grab a beverage from Thunder Mug and enjoy the scenery as they play. OR we hit Slices after for some yummy pizza. I love East Falls!

Aaron Oliva Vince Novitsky III Hardly down the block. Perhaps because you are a suburbanite, you don’t mind driving, but as a city person, it’s not a local park.

Aaron Oliva Carolyn Card Sutton That sounds nice, but not my impression. Wissahickon creek is lovely but not local. Laurel Hill is a cemetery, schuykill river is great for cyclists and joggers, but hardly an oasis with Kelly drive next to it, the only sizable playground is McDevitt and park that is green is McMichael. I don’t share this feelings of loss not living in a more densely populated area. Taxes don’t go to the neighborhood. I don’t think it’s going to become the oasis that you imagine.

It will likely be an entity on to itself whose wealthier newcomers, I imagine, will look at Fallsers as quaint peasants ready to be gentrified.

It will equate to more traffic. But, hey, no park will be built so it’s moot. I am just not excited about it personally.

Aaron Oliva Michael Andrew  I guess we will see what businesses come. I don’t look forward to a more densely populated area personally, but other than more traffic, we won’t really notice, because the residents there won’t associate much with the rest of East Falls I imagine. It will likely be renamed Manayunk South. 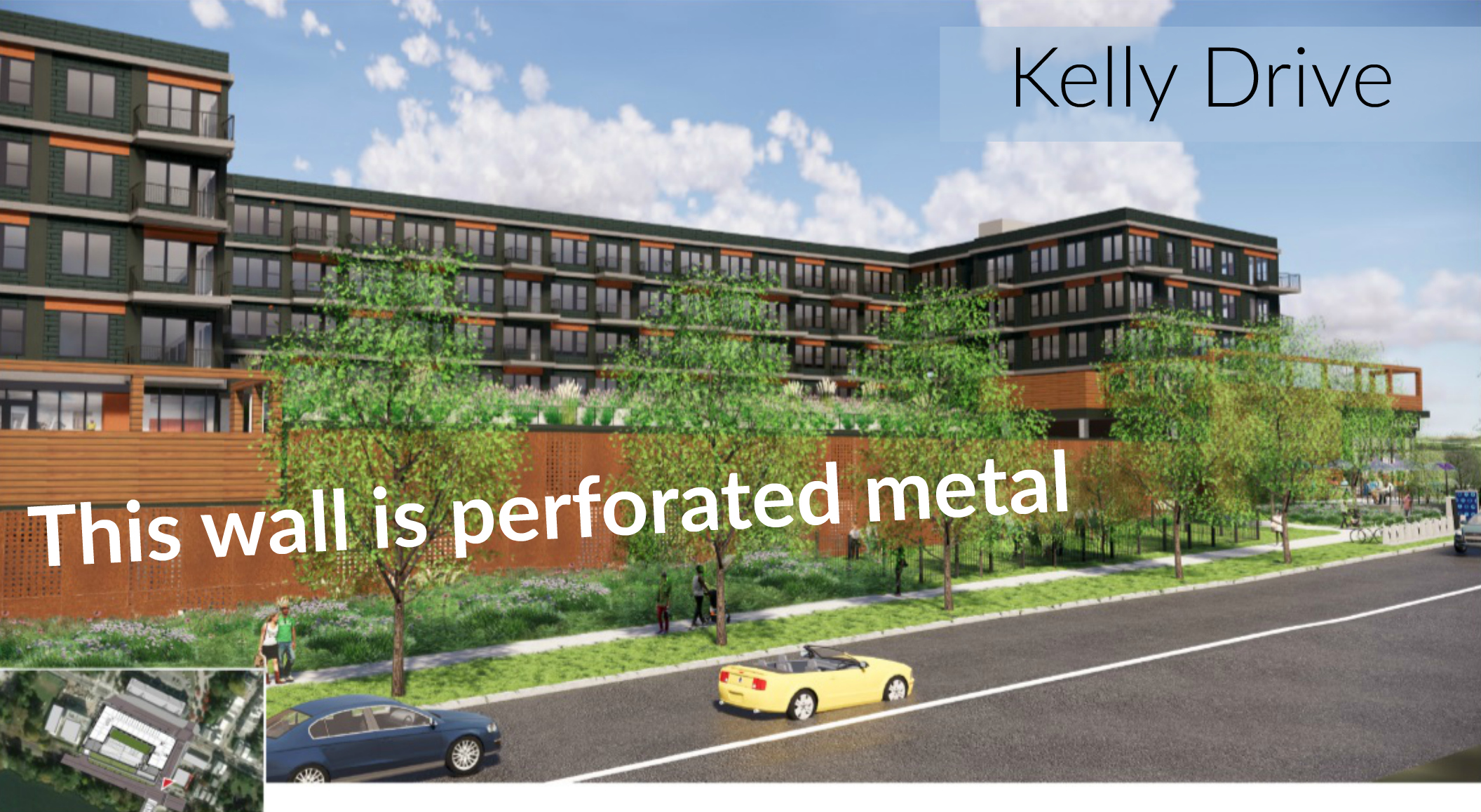 Katrina Denk Gonzalez I think there’s an opportunity to do so much with that “wall” sitting on Kelly Drive that will hide the parking. Break it up with vegetation, work with artists, or artistically-driven architects, to design tile pieces, or even a mural through the Mural Arts program. Anything but a massive brick wall.

Jason A. Howie Katrina it won’t be brick it’ll be some kind of stylized metal structure

Jason A. Howie But I’m not disagreeing with your point of mural arts or something

Kristin Haskins Simms Katrina Denk Gonzalez agreed. “green partition” but what are they keeping out? Why a partition in the first place? 🤷🏽‍♀️There is mostly traffic there with runners and cyclists across the street.

Jason A. Howie I think the wall is more about the slope of the lot than anything else. Or I could be making this all up.

Erik Viking I always thought a Trader Joe’s would be perfect in that spot (we need our own full-fledged market, right?).

Kinda disappointed that it’ll be apartments/market (expanded, above-ground parking needed now), but I’ll take it if it’s a real grocery store (cause Major’s just isn’t doing it). Any idea of what type of market is going in?

Erin Gale Erik Viking something like Giant’s Heirloom Market concept would be SO nice. Fingers crossed for something along those lines!

Edan Cohen So that’s why a pig flew by my window today. I can’t believe this has actually started. You’d think he’s building the Burj Khalifa here by how long it took to break ground.

Don Yeager So the intersection at Ridge/Calumet/Heritage is going to get even worse?

Dené Mckee Not here for it😒. But since I live here I unfortunately have to be here for it .

Mike Davis The permits for this project were pulled last spring — it needs to get a move on asap or risk starting over. The Redevelopment Authority’s deadline I think is February…

Shot-gunned into your conscious via both eyeballs, in a spirituous froth of truth, hear-say and leg-pulling. [more…]

False Alarm at the Falls Bridge

Nothing to see here, just the Water Dept again…  [more…]