Some of us who tuned into last month’s East Falls zoning meeting via Zoom could be forgiven for thinking we’d stepped into the Twilight Zone. No matter how much we adjusted our monitors we couldn’t quite shake the sense we were all back in 2016 on the campus of Philadelphia University (!) while the owner of a little-known startup called Wissahickon Brewing Company (WBC) presented plans for a microbrewery in a forgotten little industrial park at the bottom of School House Lane.

Since then, that “little startup” has won multiple awards, drawn craft beer fans from all over the city, hosted many neighborhood charity events, and provided one of the few communal spots in the Falls where folks could get away from being homeschool teachers or worrying about job security, if only for a little while.

WBC has come a long way by any measure — except in the eyes of a few “concerned neighbors” (and members of East Falls Community Council) who attended the Zoom meeting to reprise their roles from 2016 as the not-so-neighborly voices of the community. EFCC Zoning Chair Todd Baylson couldn’t help expressing his astonishment at how the comments from Meg Greenfield and Steve Kish echoed their comments from the 2016 meeting –

Video Flashback! The observant viewer will likely note many eerie similarities when comparing the videos below…

Their plan seemed to be the same too – badger WBC’s lawyer (Greg Heleniak) to agree to contract negotiations in return for approval of the brewery’s variance request. What issue did they want to haggle over? Amplified outdoor noise. It made no difference that WBC has never held events with outdoor amplified sound and had no intention of doing so in the future, according to Heleniak. Concerned neighbor Meg Greenfield had a ready reply:

“You say that’s not your intention Greg, but you know that doesn’t mean a thing tomorrow morning when you wake up. As you know, you can say today what you intend. And tomorrow, if you change your mind, it won’t mean a GD thing. Would you be willing to commit to a binding agreement not to have outdoor events with amplified sound?”

Seems like no big deal, right? What’s the harm in agreeing to not do something that you never planned to do anyway? Zoning Chair Todd Baylson saw it a bit differently:

Excuse me but I can only take so much. And it’s really important for people to understand that I started doing this (became zoning chair of EFCC) because this community and this RCO had a terrible reputation with applicants and businesses. And over the years, we’ve attempted to be reasonable and tamp that down.

We have had applicants agree to these kinds of negotiations, and then the discussions and the drafting and the language have dragged on beyond what is reasonable for anyone. I am hesitant to have Meg negotiate with them, because I have seen what happens when people agree to that. And it is not a quick path. And it can also be very difficult for everyone. And I’m not willing to be part of such a mean-spirited conversation. And it has happened, years and years of it.

It was quite amazing to hear Todd say it so plainly in public but, as members of the “other” registered community organization (RCO) in East Falls, East Falls Forward, we’ve heard first-hand accounts of similar situations. Negotiations that began over seemingly harmless issues can delay permits and create real legal/financial burdens for businesses.

Businesses such as Triumph Motorcycles, The Foodery, and at least three others (a water ice shop, a seafood takeout, and a muffin store) had decided to move on to other neighborhoods (or out of business) after negotiations with the East Falls Community Council broke down. As for The Foodery (which went on to do very well in Roxborough), when word got out that the Falls could’ve had a craft beer shop, it pissed off the neighbors so much they decided to form East Falls Forward.

Yes beer is that important, but so is having the entire community know about business development and “negotiations.” Having a couple members of an RCO try to strongarm a business into agreeing to binding contract talks during a sparsely attended online meeting (and, worse yet, still have Todd Baylson agree to continued talks “offline” despite his reservations) is exactly why a second RCO is necessary in the Falls, especially one that relies on transparency and democratic voting by all of its members.

Thanks to an online presentation and a unanimous vote in support of WBC, EFF was able to provide Tim Gill, the owner of WBC, with an approval letter within 48 hours. Funny thing is, EFF was there to do the same thing for WBC in 2016. Deja brew indeed.

SUMMARY: Wissahickon Brewing Company presents to the community, requesting a variance for all the things the brewery has been doing very well for the last 4+ years. The only new change is that now they are doing yoga outside (due to COVID).

WBC’s architect Ian Smith explains that something they requested in their zoning application was mistakenly not included in L&I’s approval for zoning permit. L&I could not account for why this happened — WBC provided all their documentation and the architect seemed genuinely surprised that L&I still ruled that WBC would need to basically go thru the whole zoning process again to correct this.

So that’s why they had to meet with the community again, and why they’re asking for neighbor support for services they have already been providing at this location since 2016.

Listen Up. Speak Up.

To get the latest on community buzz — and register your vote on important issues affecting the Falls — join EFF at eastfallsforward.org. Or follow us on Facebook. Community ZOOM meetings 3rd Thursdays.

East Falls Forward is a registered community organization with a pro-urban mission: a dedication to making East Falls a walkable, sustainable neighborhood with attractive places to eat, shop, and do business.

We seek to provide a free, inclusive, public forum for all East Falls residents and business owners. We rely on input from in-person meetings (on hold for now, obviously), as well as online participation, to help us support responsible residential and business development. We seek to protect our history, our waterways, and our green spaces, while creating a diverse, walkable neighborhood for everyone to enjoy.

We believe in a transparent, inclusive, and collaborative process that allows as many voices as possible to participate in improving our community. All welcome, invited and encouraged to participate — and lead! We’re here to support and promote all positive efforts. 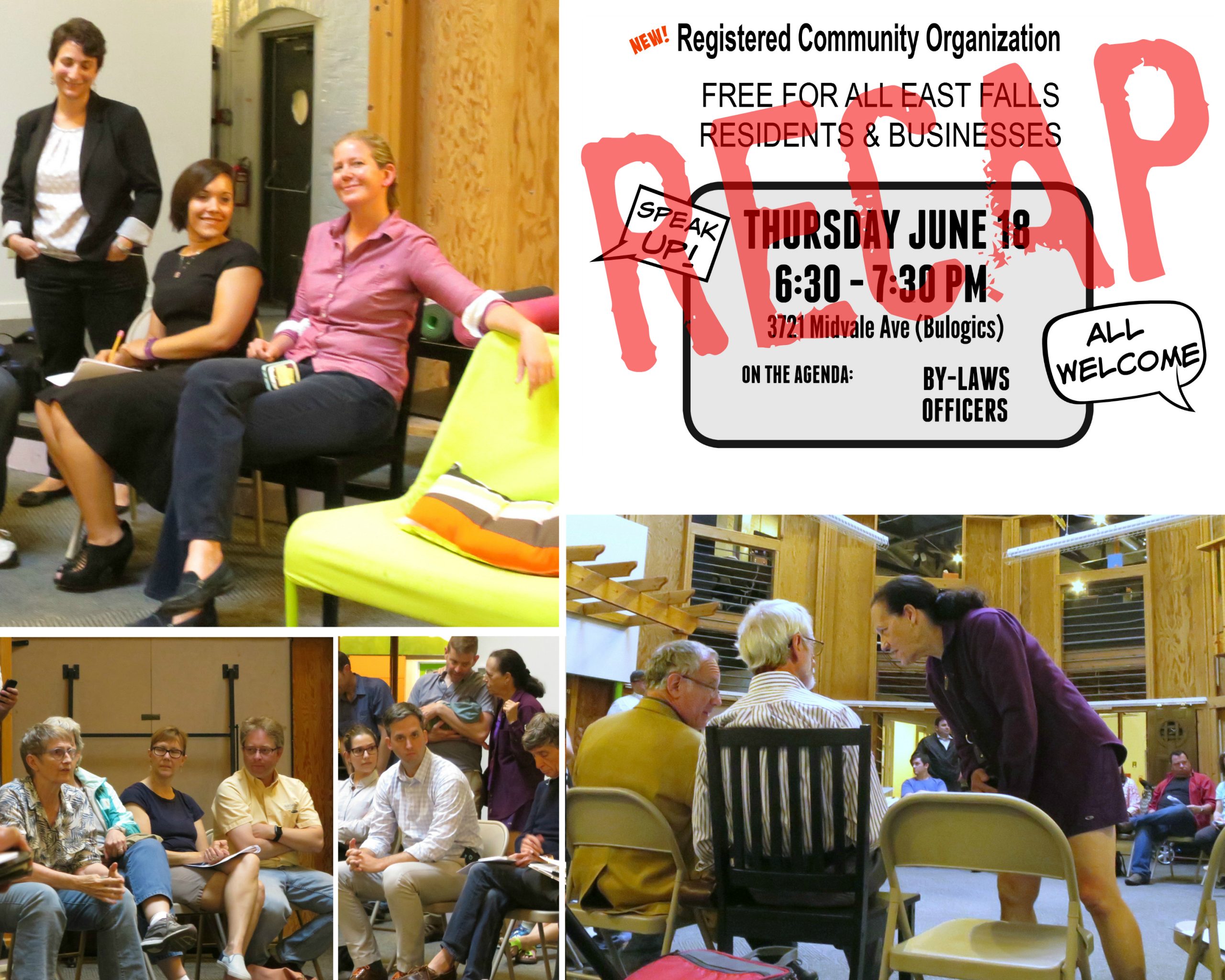 Read our recap from EFF’s first meeting (including video) in our article “Forward, HO!” (June 2015)

What Wall? Monday’s “big meeting” turned out to be a message from our sponsor. [more…]

Meet the new owner of the old Tilden Market. [more…]