Alex Jeffers closed his studio in March 2020, after less than one month in business at the lively corner of Wayne and Rittenhouse, behind Ultimo Coffee‘s Germantown location (in the shadow of Alden Park).  COVID-19 totally knocked his plans off track, but like any good yogi, Alex is quick to let go of expectations and adapt to change…

We first encountered Alex exercising in the courtyard at Gypsy Lane condos, where we are neighbors. Alexander Jeffers is new to the area — he’s only lived in East Falls about a year but he’s worked here awhile, slinging beers at Wissahickon Brewing Company. He’s also been leading Wissahickon Warriors yoga Thursdays & Sundays in the brewery. Until cornoavirus, of course.

Alex was happy to shut down, and quick to begin re-imagining Word Life Yoga for maximum safety as soon as restrictions were lifted. He added fans to circulate fresh air, and has identified several local sheltered green spaces where he can hold outdoor workouts, weather permitting.

While waiting for the City’s greenlight for gyms & fitness centers — now slated for Monday July 20 — Alex has focused on re-imagining his classes and workout space for maximum safety. He’s quick to stress he’s not a doctor, guru or wellness expert but his top priority is providing a healthy environment where his clients can trust he’s following every precaution (and then some).

Stress absolutely affects a person’s performance and also their ability to be present in the moment. As a trauma-sensitive certified instructor, Alex is uniquely qualified to provide a calm, positive and supportive environment for the anxious and vulnerable — which pretty much describes all of us, these days, amiright? Bodies of all levels and abilities not just welcomed but honored.

In addition to yoga classes, Alex also offers one of the best full-body conditioning workouts available: kettlebells! These heavy, odd-shaped free weights (sort of like bowling balls with handles) challenge muscles very differently than traditional bar bells. You can really wing them around, for starters, and incorporate ballistic movements that improve balance, reflexes and core strength. Kettlebells also burn tons of fat without a lot of impact — but you have to use them correctly so a good instructor is key.

You can learn a lot from Alex’s videos, but be sure to seek him out in person when you’re ready to invigorate your physical existence.

The Local 00:06
You’re welcome. Yeah, it’s funny. We just didn’t put it together that you were they Gypsy Lane guy and we saw you’re doing the reading from the yogi book on the steps and we’re like, oh yeah, there it is. There’s Gypsy Lane.

Alex Jeffers 00:19
Sitting on the stoop out in the little field where you can find me roaming around campus as I like to call it. I love it there. Yeah, get that itch once it starts to get nice outside like I just need to be outdoors.

The Local 00:32
My understanding is your business opened like you’ve been working on this Word Life Yoga since February right? So it’s relatively new.

Alex Jeffers 00:38
Yeah. So my lease officially started here in Germantown. In the month of, or the beginning of February. We are if you know, Ultimo Coffee right on Wayne Avenue. Next to a Rita’s, across from Mastery school. So we are right behind read the Ultimo Coffee, and we’re right in the middle of them and the Germantown Bike Shop. So we’re technically on Rittenhouse Street, we have a Wayne Avenue address. 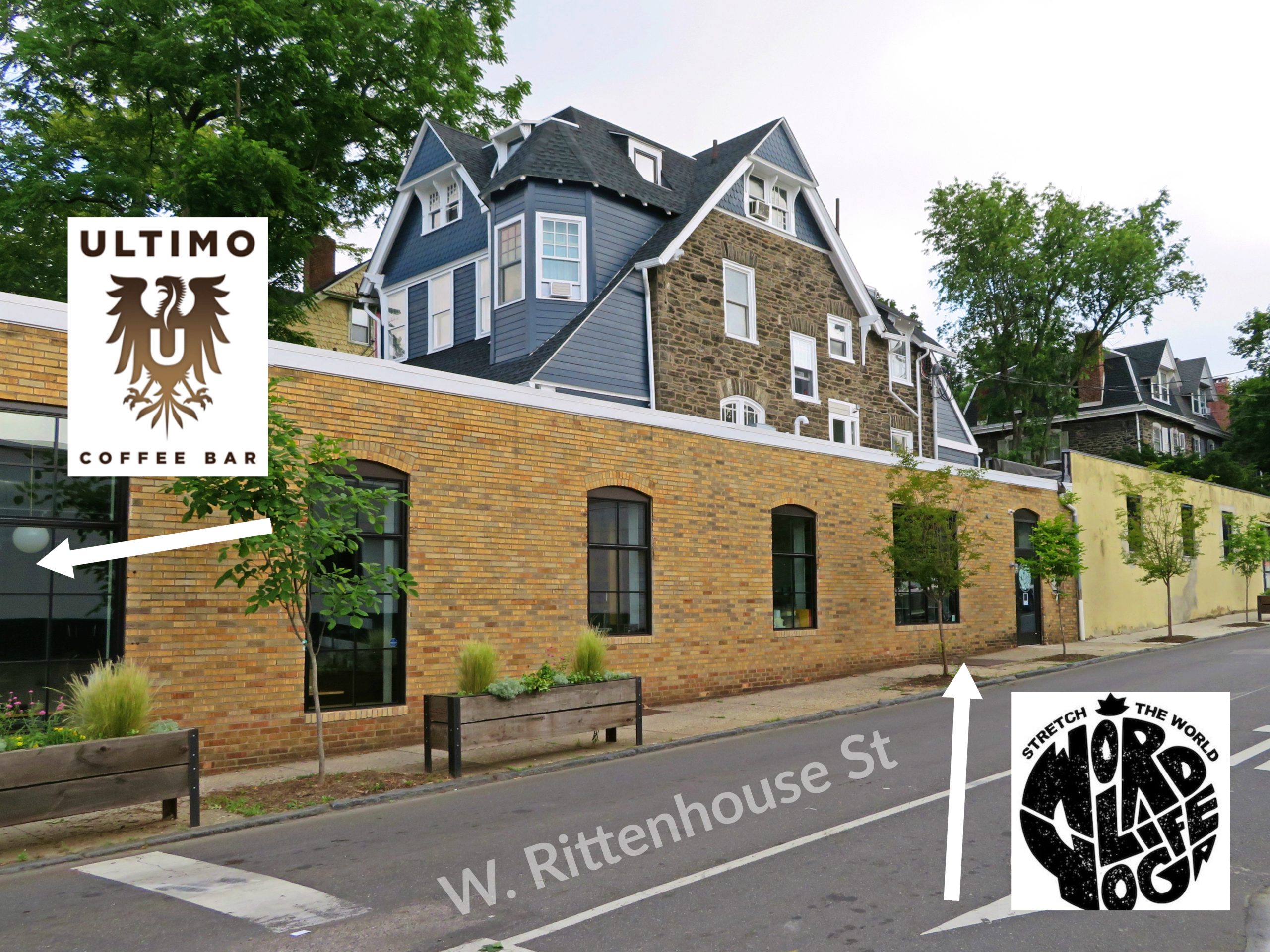 But our front door here at Word Life, this window pane behind me, faces out to Rittenhouse Street. So there’s a carwash next door to us. And it’s a little one way street.

My official first week of classes was March 9. And then as you can imagine, that following week, the 14th, was the lockdown. So basically, we’ve been an empty studio except for myself. So my biggest pivot right now has been how do I get classes outdoors, and not just indoors? Because one of the things here in the studio, and I got my iPad here now so I can give you a little look, is when you walk through the front door here.

This is a studio space essentially, and there’s no real ventilation through windows that can open up, so what I plan on doing is up on that red beam up there on the wall. That red beam up there, and underneath my little studio desk, I plan on putting two fans up top and a little air purifier to have a steady rotation of some fresh air going around here. We do have good ventilation through our HVAC. But nonetheless, I think more is better in this scenario.

So the biggest pivot has been trying to figure out how to get classes outside because I think that even myself included, I like to be outside. And I’m noticing even now in the summertime I really want to teach a class outside too.

Doing that and figuring out just in general how to respectfully and strategically integrate myself into the community here in Germantown, because I just moved to East falls a year ago. I’ve been working at the (Wissahickon) brewery for a few years. And then four or five, I guess it’s five, months here at Word Life Yoga in Germantown. So just trying to figure out how do I integrate myself, you know, in the in the right manner. 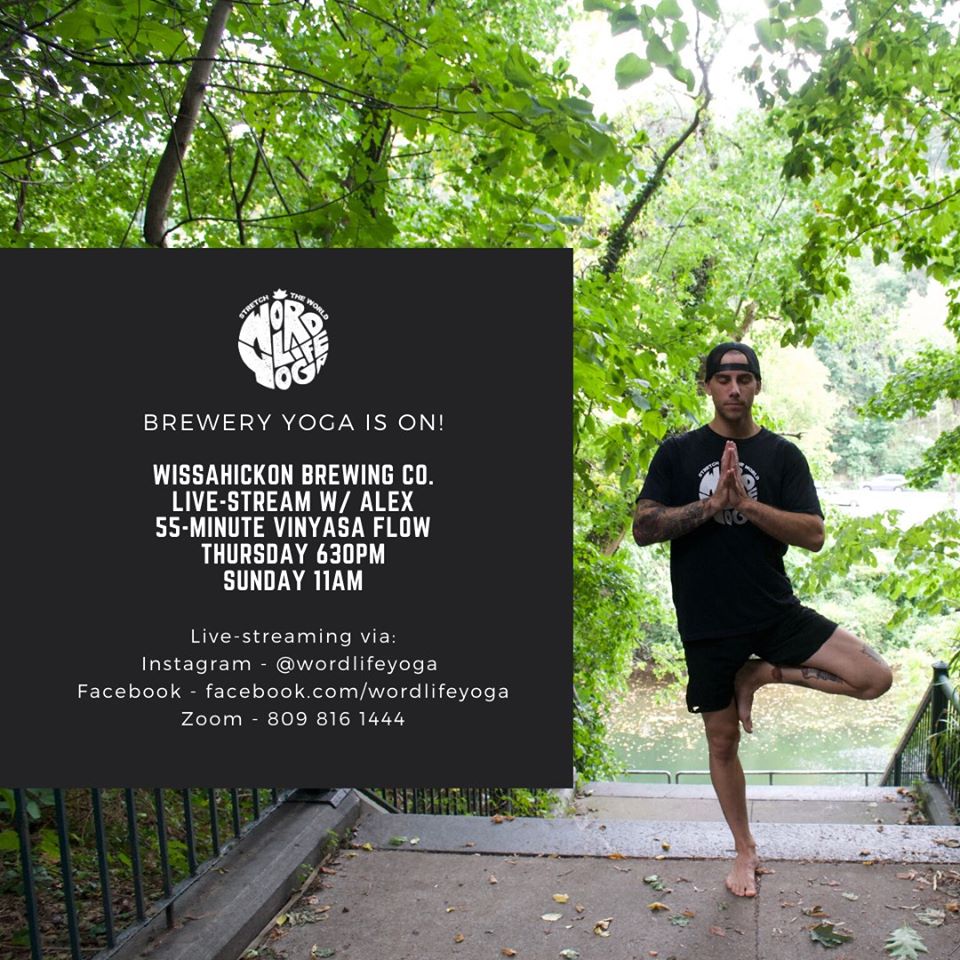 Alex Jeffers 03:22
Yes, Wissahickon Warriors. That started right off the bat in 2017, a young lady named Maria Terry, who now lives in New Orleans, she basically took that thing snowballed it, made it awesome, built the following and she allowed me to be her assistant from the beginning. And this is right when I started teaching yoga in 2017.

So I was her assistant, she would give me like 10-15 minutes here and there, let me get comfortable. And then Sunday mornings turned into Thursday evenings for me, and here I am now Thursday evenings and Sunday mornings. I am the instructor for an all-levels class over at the Brewery. We’re hoping that that will start up in the next week or so. If not right after, right after the holiday on July 4th.

The Local 04:13
And it’s a big space in there. And just to let people know who might not be familiar what it is you do there, you do your yoga routine, and then afterwards you have a beer. At least one

Alex Jeffers 04:27
Have a cold one. Have a cold one, two, three. Being safe? Go ahead. But yeah, that’s Sundays and Thursdays. It’s awesome. $15 right now for the hour yoga class. All levels Vinyasa and a beer, a wine, or a cider at the end of class. And we’re dog friendly. So you can bring your dog too as long as your dog likes other dogs and other people.

The Local 04:50
That’s a big one. That can be an issue. So at your place then, what classes are you offering at Word Life?

Alex Jeffers 04:57
So Word Life we’ll be doing all levels, vinyasa classes. Yin yoga classes, which are like restorative yoga classes, Hatha Yoga, and we also do kettlebell classes, which is something that I just got certified as an instructor back in December on kettlebells. If you give me one second I’ll go grab one real quick to give people a little look at what they are…

So this is a little kettlebell. Got the horns, the handle, the bell. It’s a different way to manipulate through all planes of the body, as I like to say. And mobility meditation. So we will have a schedule out hopefully in the next four to five days. And yeah, we’ll go from there.

The Local 05:42
Cool. Have you had any interest from instructors in Germantown?

Alex Jeffers 05:47
So there’s going to be two young ladies who are going to be teaching at least once a week. Alicia, her last name is Sharp. I believe that’s how you pronounce it. Alicia. She teaches over in the Manayunk area. And then a young lady named Jenny, who lives two streets over who is a local instructor here in Germantown.

So yes, I will have some local instructors here. And we’re going to start out slow. We’re each probably going to do at least one regular class per week, here at the studio. See how the ball gets rolling, and then we’ll go from there. So kettlebell classes and I’m also doing makeshift classes. So if people have like small groups that they have, they can hit me up and we can do small group stuff.

The Local 06:34
I think I also saw you had something called trauma sensitive yoga. What’s that entail?

Alex Jeffers 06:48
So all the classes that I teach are through a trauma lens. I try to create what one might call a safe space at all times. When I’m teaching yoga, as I’m sure you could imagine, any fitness class can sometimes be intimidating. And in a yoga class you can feel very vulnerable while you’re in a class, right? Whether you’re lying down on your back, reaching your arms up — it’s very subjective from person to person.

I teach all of my classes through a lens that is trauma informed, it was actually a training through a transformation yoga project. Essentially, it’s through all the classes that I teach, I approach it with the attitude that whether you’re a beginner or whether you’re advanced, you’re going to feel safe in this class.

And you’re free to do what it is you’d like to do and feel comfortable. Because one of the things that I noticed, and this is not a diss on anybody, but I just noticed that there can be more of a telling you what to do in a yoga class from instructors at times. I’ve tried to make my message clear which is I’m not here to tell you what to do by any means.

I will give you variations, different ways to do poses. But always feel free to do your thing. And it’s been quite interesting because I will say those words before and during class, just to let people know and remind them. I’ve been doing this for six years, but there’s still times where I just want to be in child’s pose for five minutes because I’m wiped you know? I just want to just let me chill and so let me do my thing. So trauma informed is teaching through that lens.

It’s approaching every class, every student, with that approach. Whatever you’re feeling today, if you want me to back off, I will leave you alone. I try to let people know that whether this is your first day or your thousandth day. There’s days you will feel anxious, depressed, whatever it might be. Because that’s one of the reasons I got into yoga in the first place was anxiety, some mood or depression swings here and there. So, it’s one of those things — it’s your thing, it’s your practice. And I’m just here to suggest.

The Local 09:25
Right. Good luck to you, the business, and thanks for making time with us.

A Public Service Announcement about parking from East Falls Rants on Facebook. [more…]

Head of the Class, Heart of the Community

A new student council executive board takes office at Roosevelt School. Men Who Care of Germantown shares in the moment. [more…]