Another year, another reboot. Say hello to the new East Falls Forward, our neighborhood’s year-old zoning body aimed at business and development.  Recap from Thursday January 21st’s meeting with pics, video, and links for online participation on key issues affecting our streetscape and quality of life. 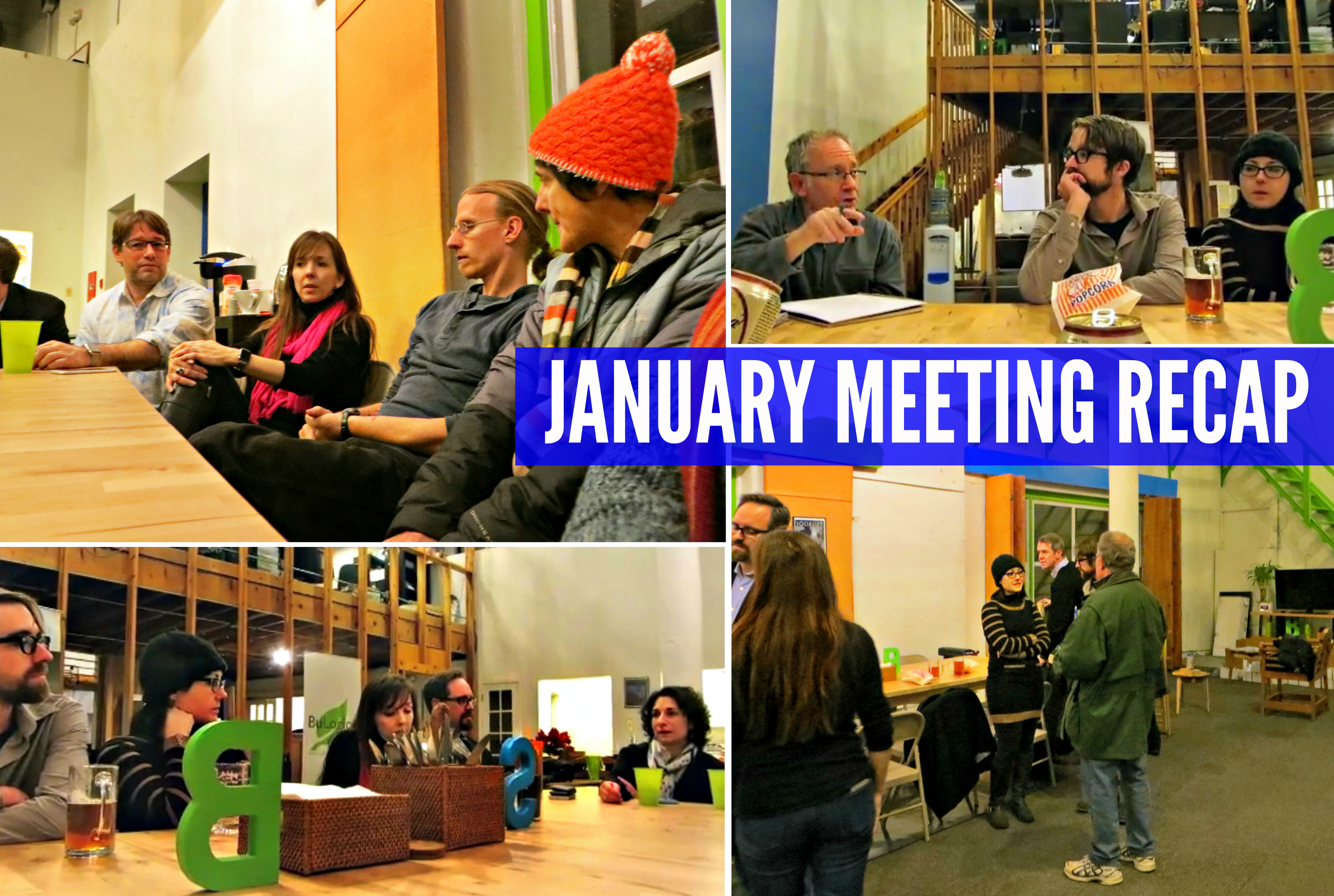 This was the most un-meeting meeting ever:  we all sat around a table, chatting for the most part. There was beer and popcorn, the sound of kids playing in the background. Less than 20 of us gathered, mostly familiar faces from other meetings, including Bill Epstein (EFCC president) and Gina Snyder (EFDC director).

Some chatting, then we got down to business. Super-short summary:

Full commentary with video below, but first:  Who is everyone?

Because I am personally involved with these people, I figure I’ll give you my completely-biased run-down with links to articles I’ve written about efforts we’ve all worked on together (and of course you can read the candidate’s own “Statements of Purpose” on EFF’s website).

Hopefully that’ll provide a good picture of the new officers, but really, if you wanna know these people just show up at a meeting and say hi. None of them are stuffy folks, on any level. 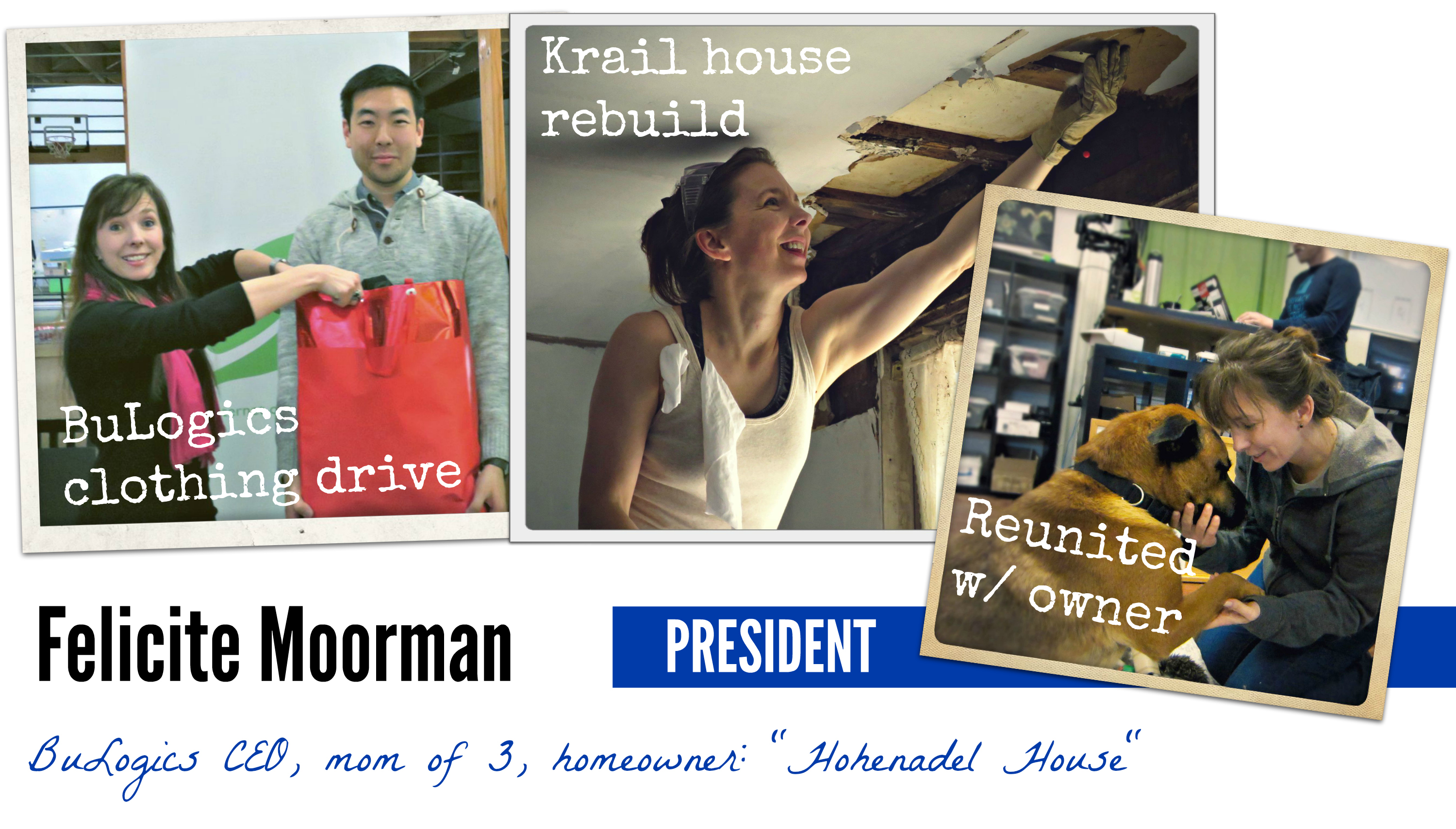 Felicite Moorman’s all about community — in the (almost) 2 years we’ve known her, she’s rescued lost dogs, rebuilt a family home, organized local clean-ups, hosted scouting events… A big part of her job as CEO of a tech firm is to connect engineers and designers of diverse talents (and big egos) on interesting projects, and get them to collaborate productively.

I’m curious (and optimistic) to see this modern skill set focused locally, at the head of a recognized community group. 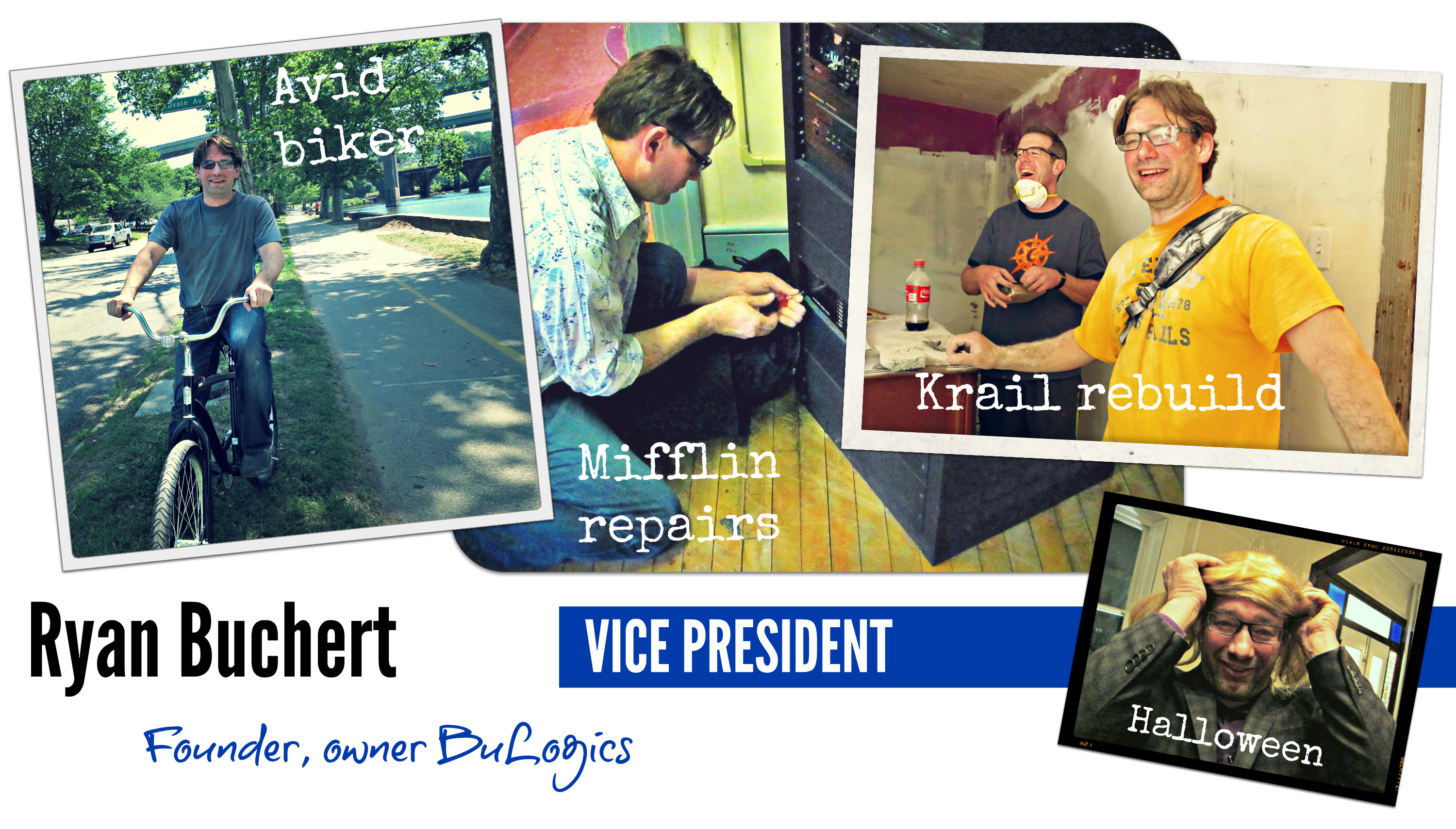 Ryan Buchert’s an Eagle scout, and some kind of weird productive genius that is always learning things. Stuff Ryan can do:  fly planes, drive race cars, build houses, wire anything, dance Argentinian tango… I’m sure I’m missing some. He holds a bunch of tech patents ‘n stuff so he’s obviously really smart but then he hangs out at Murphy’s so he’s also a regular dude.

Goes without saying he will be helpful figuring out an online voting system, and organizing our voice & presence online. 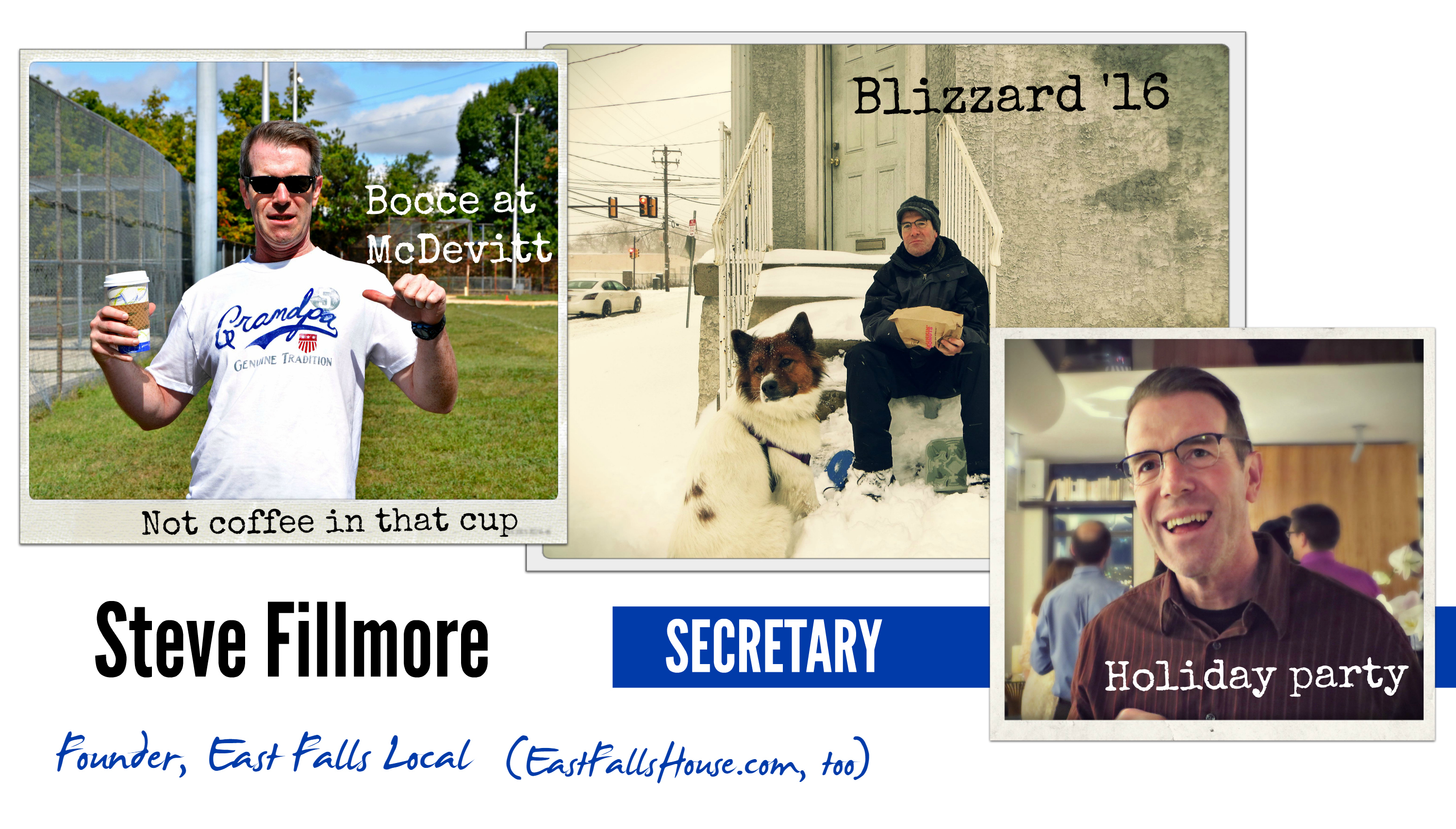 Steve Fillmore — what can I say? Together, we’ve been growing East Falls Local since Fall 2014 because we saw a need for real community news here. We already go to meetings and do recaps, why not make it official? Big on transparency, Steve’ll be creating an online database of EFF files, documents, and photographs, plus working towards providing clearer meeting video (for all local public meetings, if possible).

Steve sees many opportunities to better inform and involve East Fallsers on all kinds of important local concerns. Plus I can totally vouch for him!  🙂

Starting off as new chair, Felicite underscored EFF’s mission, which is “to create an inclusive organization for perhaps disenfranchised voices in the community, maybe those who hadn’t been specifically welcomed or didn’t feel welcomed.”  With EFF, she sees opportunity for collaboration between all organizations.

She’s a transplant from Oklahoma, but the moment she saw Ridge & Midvale, “I was home.”  She & her active family are renovating the historic Hohenadel Mansion on Indian Queen Lane, and her company, BuLogics, has hit a major growth stride here — already their movie-theater/office/treehouse on Midvale is approaching maximum capacity (and they only just moved in last year).

“We’re here to make this community everything it can be with as many people who are willing to do it as possible, collaborating with as many organizations as we can participate with.”

EFDC, EFBA, EFCC members — everyone is welcome to join and even lead any of East Falls Forward’s efforts! Felicite embraces cooperation, and appreciates every opportunity for more volunteers & voices. Three key points:

Zoning is the Number One Most Important Thing  Felicite would love to see some additional voices coming forward with their thoughts & ideas about what this community grows into. “Because we cannot make it *not* grow — that’s not gonna happen — so what does it grow into? How do we foster that as a community?”

Next a welcoming committee to reach out to new families who move here, introduce them to the cool stuff in our neighborhood, maybe something with maps and local business listings, and so forth. Events such as beautification projects and the Bike Race Block party could present opportunities for us to work together as a community. Perhaps a family picnic, or a pack walk, or something for kids?

Finally, business outreach too. Felicite would like to target businesses that are absent here. She’s got a list of 50 of the fastest-growing, most stable franchises in the US — she’d like to start there, aim for maybe La Colombe or a local bakery.  A recent survey (still going on, please *TAKE IT* if you haven’t already, thanks!!) of 250+ East Fallsers listed coffee shop, takeout beer, and grocery as the top three desired local businesses.

Felicite went on to propose a social mixer for EFF’s next meeting February 18th, “if anything comes up of course we can address it” but otherwise let’s not get bogged down with a big giant agenda before we’ve all had a chance to get to know each other.

No sooner had we all agreed this was a fine idea, than Gina Snyder (director of EFDC) piped up from the other end of the table, “Uh… guys… I think we already have something for the agenda…”  Seems Grasso will be presenting for East Falls zoning variances next month. Yes, THAT Grasso:  the long-awaited development of the old Rivage site at Calumet and Kelly Drive.

(2/7/16 — ed NOTE:  GRASSO WILL NOT BE PRESENTING THIS MONTH! Although Bill & Gina seemed to think Grasso would be presenting at February’s zoning meeting, EFCC has indicated that might not happen, we’ll need to wait till they post their agenda Feb 1st. Also, the EFCC reeeeeally hates it when you blab about who might be coming to meetings before they’ve officially announced it).

Gina explained that East Falls Forward is a Registered Community Organization in the city of Philadelphia, and developers like David Grasso must by law present to EFF for zoning variances, same as they do for EFCC (the other RCO in town).  The most logical solution would be for both organizations to co-host February’s zoning meeting (which happened last Fall when PhillyU presented their 30 year plan).

Then the question would be what would be the decision-making process after that meeting in order to weigh in as an RCO.  Felicite stressed the importance of clarifying policies and voting procedures publicly online as soon as possible (and also provide in print). Especially the process of how we come to a decision as a group.

Gina also chimed in about the Bike Race Block Party, which has been going since 2002, and is pretty much a hands-off event now with the Philly Bike Race people doing most of the work. They advertise, they put down porta potties, they set up a “Sprint Zone” with a tent, music, and announcer,  etc.  It’d be the perfect event to try out new collaborations between community organizations.

Finally, Felicite took a moment at the end of the meeting to address why she’s putting time and effort into East Falls Forward:  while she expressed optimism for the new officers in our Community Council, she feels there’s still a need for another organization to make sure that voices like hers “who were disrespected” will feel welcome and included, instead.  In her own words:

“I don’t think that we’re doing all we can yet… After all of the work that went into creating this, to drop this reaction… to prior Community Council leadership, it would be a disservice to all of the work that they did.  So I’m going to continue it for that reason. If we determine after a year that there’s no reason for this organization, so be it.”

Long-time Division Street resident Linda Norris chimed in, “Everybody feel valued, and that what you have to say is important.”

Another point we could all agree upon.

SO WHADDAYA SAY?!  Whether we like it or not, new changes are heading our way. Instead of reacting against the tide at every turn, let’s work on channeling it towards benefits for all neighbors.

East Falls has a choice now for zoning issues and development discussions. Join East Falls Forward for a front-row seat to big changes underway in our area. Come have a say in how our neighborhood grows! 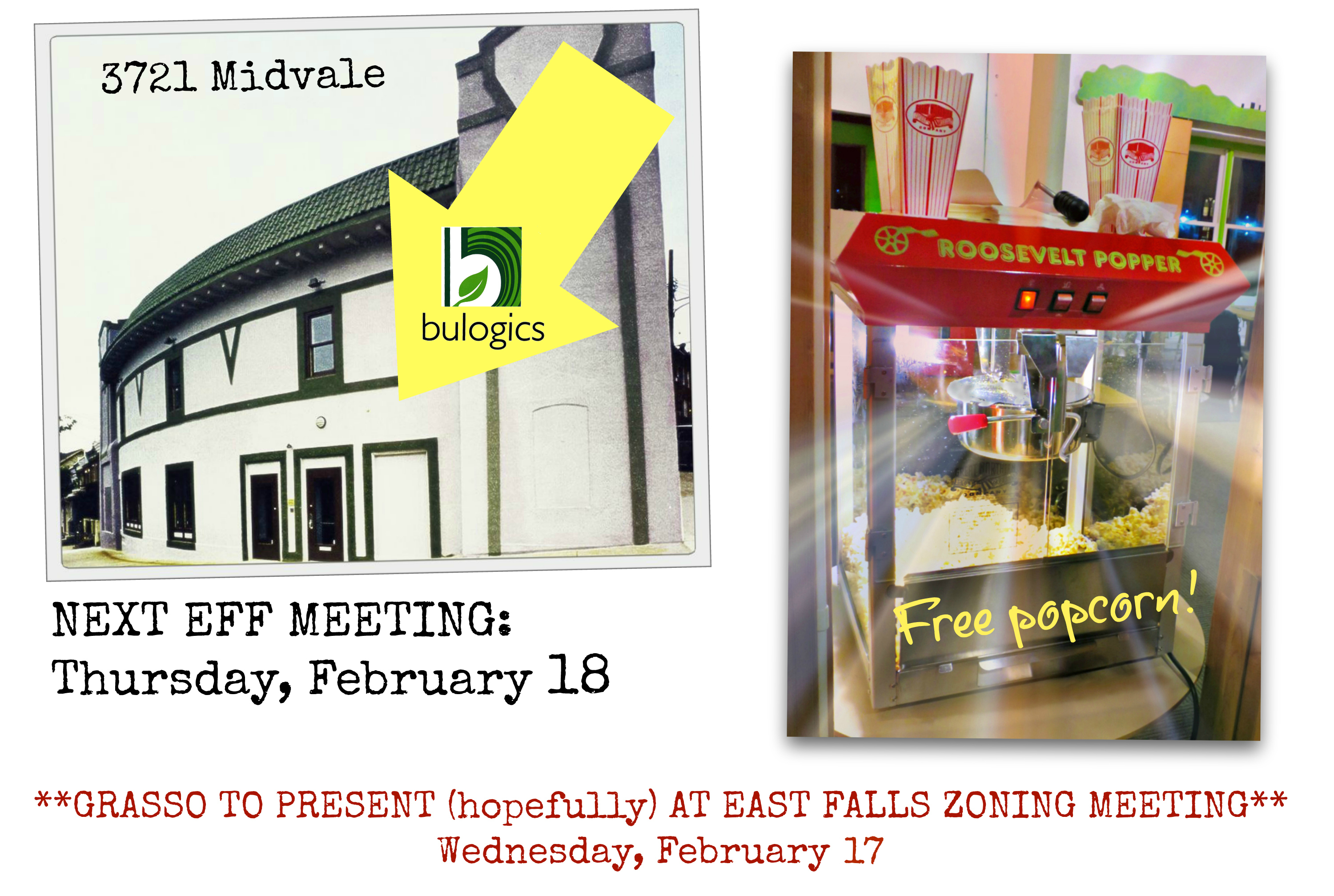 FYI:  East Falls Forward’s kid-friendly meetings feature yummy fresh popcorn for all (and beer for the grown-ups). Third Thursday of every month, at BuLogic’s office at 3721 Midvale Avenue.

EAST FALLS ZONING:  Wednesday, February 17, 7 pm at Downs Hall on PhilaU’s campus. FYI:  GRASSO WILL NOT BE PRESENTING THIS MONTH!