Signage for Maplewood Mall construction might be muted but it speaks volumes.

UPDATE 1/23: Near neighbors and concerned residents are invited to a public meeting Monday 1/27 (6-8PM) at Greene Street Friends school.

Everyone knows: when you want to find out the truth about someone, watch what they do and not what they say. Near neighbors adjacent to Maplewood Mall have been paying extra-close attention to the construction progress – searching for clues to what’s going on.

For the past 7 years, while touting Maplewood Mall’s reconstruction as “a transformational project for our entire community,” the City Planning Commission and Germantown United CDC have been holding private meetings with “community member stakeholders” of their choosing (so far mostly limited to mall owners/occupants only).

So all we can do is watch for signs. Literally. Six new “Open During Construction” sandwich boards appeared December 20th. For some, the signs reveal a troubling lack of concern for Maplewood Mall businesses, despite GUCDC’s posted mission to support Gtown’s struggling business districts.

Size  If the goal was to reach potential customers, these standard 2’ x 3’ white plastic double-sided A-frames are an odd choice. They sit low on the sidewalk behind parked cars – hardly noticeable to passing traffic, dwarfed by the walls of chain link and construction equipment. Certainly big vinyl banners on all that fencing would be much more visible – and less expensive, too: sandwich boards are about $100 on Amazon whereas you can get a custom 6’x2’ banner for half that. Are we missing something?*

Content  Maplewood Mall’s lively mix of businesses are distilled down to a honeycomb of generic icons on the signs. No names, info or logos, except for GUCDC of course. There’s also a QR code that goes – where else? – to GUCDC’s website. Their page on Maplewood Mall’s “Reconstruction” includes basic info about the project but nothing about the businesses – no links or directory or call to patronize these establishments during construction. Who are the signs supposed to be promoting?

Timing   GUCDC announced they’d received grant money for Maplewood Mall signage in October, yet the first signs didn’t appear until a mere 5 days before Christmas – a full month after the project broke ground. Deputy director Emaleigh Doley was remarkably flip about this on Facebook, “Ideally we would’ve had these signs up before construction began but that didn’t happen.” Why wasn’t signage a priority?

And what’s up with breaking ground a week before Black Friday? Many small shops & services make the bulk of their profits during the Holidays. After seven long years of delays, it seems odd that Maplewood Mall’s renovations couldn’t have waited another month. Is this some kind of FU? Is the City hoping these businesses fold, so they can replace them with higher-end tenants?

Searching for more signs, it seems other things are out of step with community development standards. What does it mean, do you think, when the City and GUCDC decline to include near neighbors in their primary meetings and communications with project stakeholders?

Property owners on 100 West Maplewood Avenue are well within the 250-foot radius that GUCDC uses to determine “near neighbors” in the Germantown High School development, yet have never been invited to stakeholder meetings or included regularly in correspondence. It’s not an oversight, either. Sharrieff Ali of Maplewood Neighbors Association specifically requested to be included and GUCDC unapologetically denied him. “Communications have to start somewhere,” Emaleigh replied via email, “And in this case, with this project, it has started with Mall property owners, businesses and residents.”

Adding insult to injury, in the same email thread, Emaleigh defended her choice to include a white woman who does not live or own property anywhere near Maplewood Mall, “Germantown United CDC has a monthly email newsletter but do not have the bandwidth to do as frequent of mailings,” she wrote, “I appreciate that Allison is able to forward such announcements with speed.” She then excused herself for not sharing the information better because “I cannot respond to everything that comes through our office with such immediacy.” 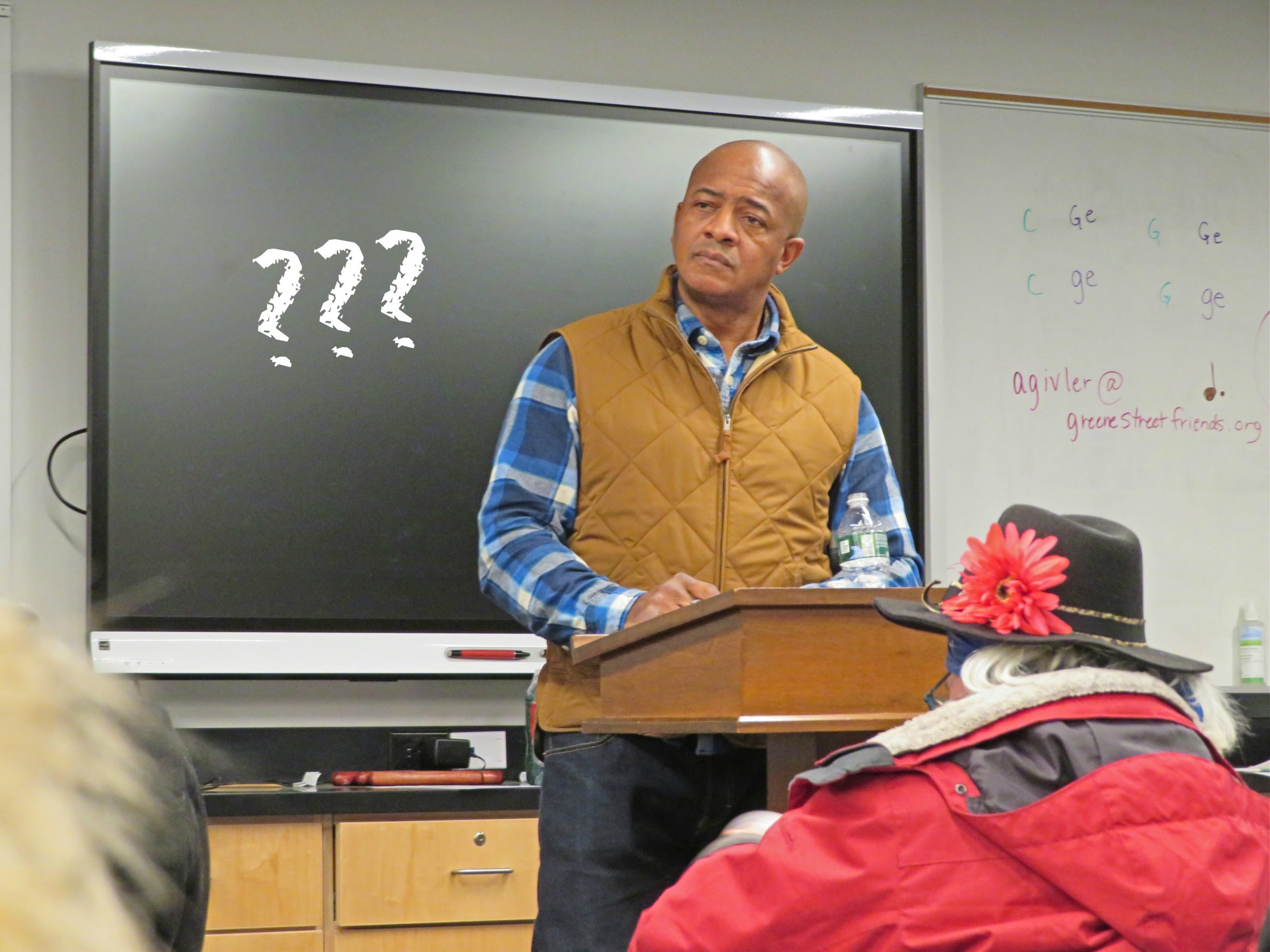 For Sharrieff, this attitude does not bode well for him and others seeking to minimize inconveniences for those who live and work around Maplewood Mall. A vocal, vigilant group banded together December 16th for a meeting hosted by Maplewood Neighbors Association to provide info, document concerns and create a plan for better communication with the surrounding community. About 20 neighbors attended Sharrieff’s brief presentation and participated in the vigorous discussion that followed.

Overwhelmingly, attendees thought the City and GUCDC could have – should have — done a much better job including near neighbors in the planning updates & discussion. No one was satisfied with the project renderings and fact sheets provided online: where are the maps for traffic, elevation, landscaping… blueprints and materials…?  No timeline or contact info has been provided, either.

Would this fly in East Falls or Chestnut Hill? How is it even legal?

Since 2014 – in the wake of that building collapse at 22nd & Market – all construction and demolition sites are required to display signs spelling out the details of the work and who to contact in case of problems. Maplewood Mall, though, has no such signs. For near neighbors, it’s distressing to have no way to reach the contractor(s) directly, even about potentially dangerous situations.

And frankly it’s insulting that such an important safety regulation is being ignored so close to home. Where are the L&I inspectors? What kind of sign is that? Certainly not a good one…

Neither is this: the City is ignoring a petition by mall business/property owners stating they are “totally against” the plans to replace some of the historic red brick with pavement. They had a few other modest requests, too, like solar lights and lamp posts similar to Wayne Junction train station. Seems worth a meeting, at least, but so far, plans are moving ahead as they are.

“We’ve been telling the City these things are important to us since they started asking for our feedback,” said Greg Paulmier, who owns the chair-caning place. This longtime local has attended all of GU’s private stakeholder meetings and still, he feels steamrolled.

“What is clearly missing is community agreement,” Sharrieff told the room of concerned faces. He suggested a written document between the stakeholder group, GUCDC and the City that provides a project schedule with contact information, and also addresses current stakeholder requests. In addition, an expanded stakeholder group should be established to take into account community concerns and provide for accountability over the next year of construction.

Moving forward in 2020, Maplewood Neighbors Association aims to bring everyone to the table in a public forum with all involved parties and our District Councilperson Cindy Bass. “An agreement that spells out roles, resources and responsibilities throughout the mall’s reconstruction process isn’t just common sense,” Sharrieff said, “It’s the right thing to do for Germantown.“ It’d be the first welcome sign, for sure.

GET INVOLVED! Support democracy and transparency in public land development, and hold City representatives accountable to the communities they serve. Email representative@maplewoodneighbors.org to get on the list for meetings, volunteer opportunities and other updates. 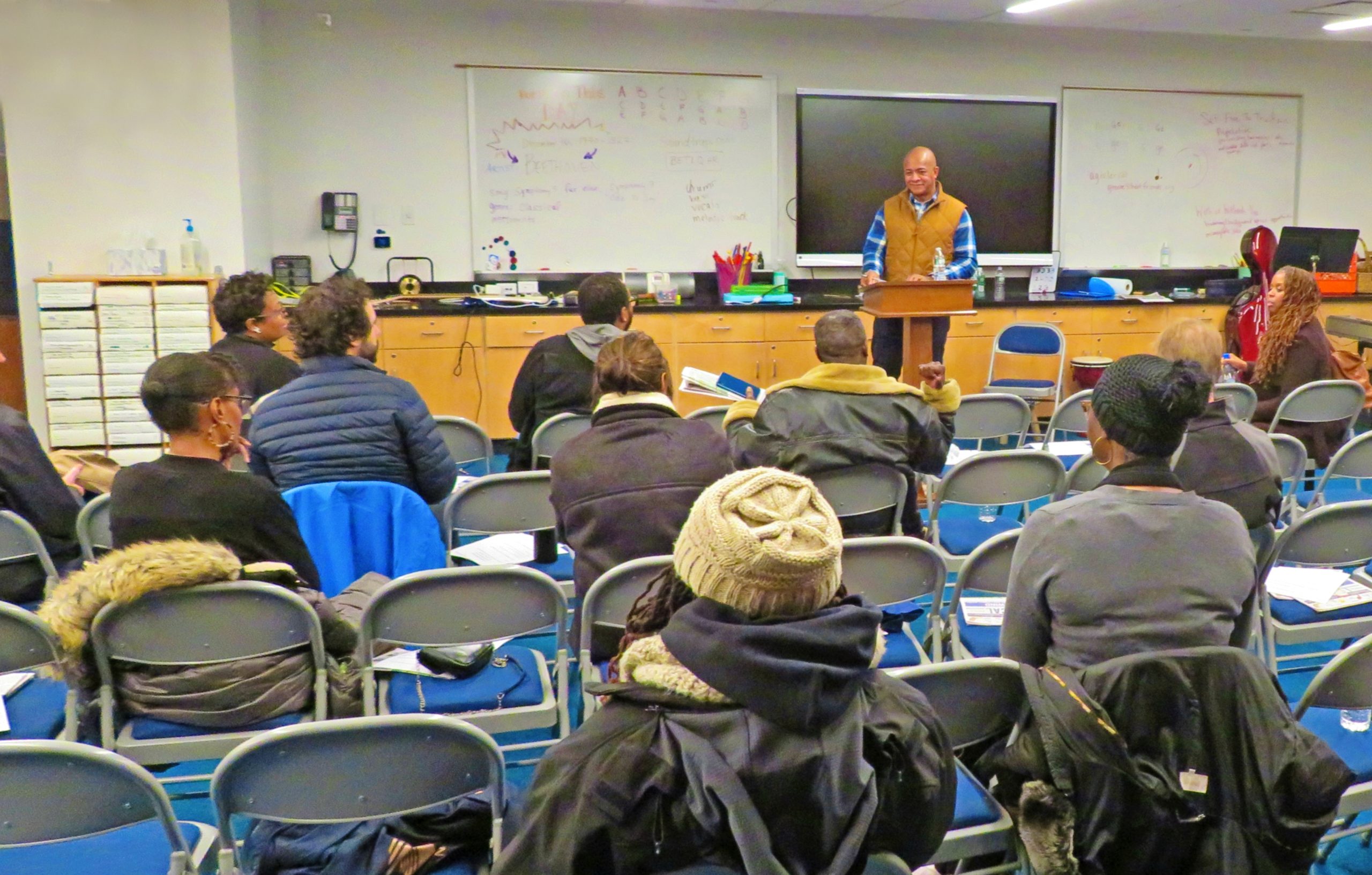 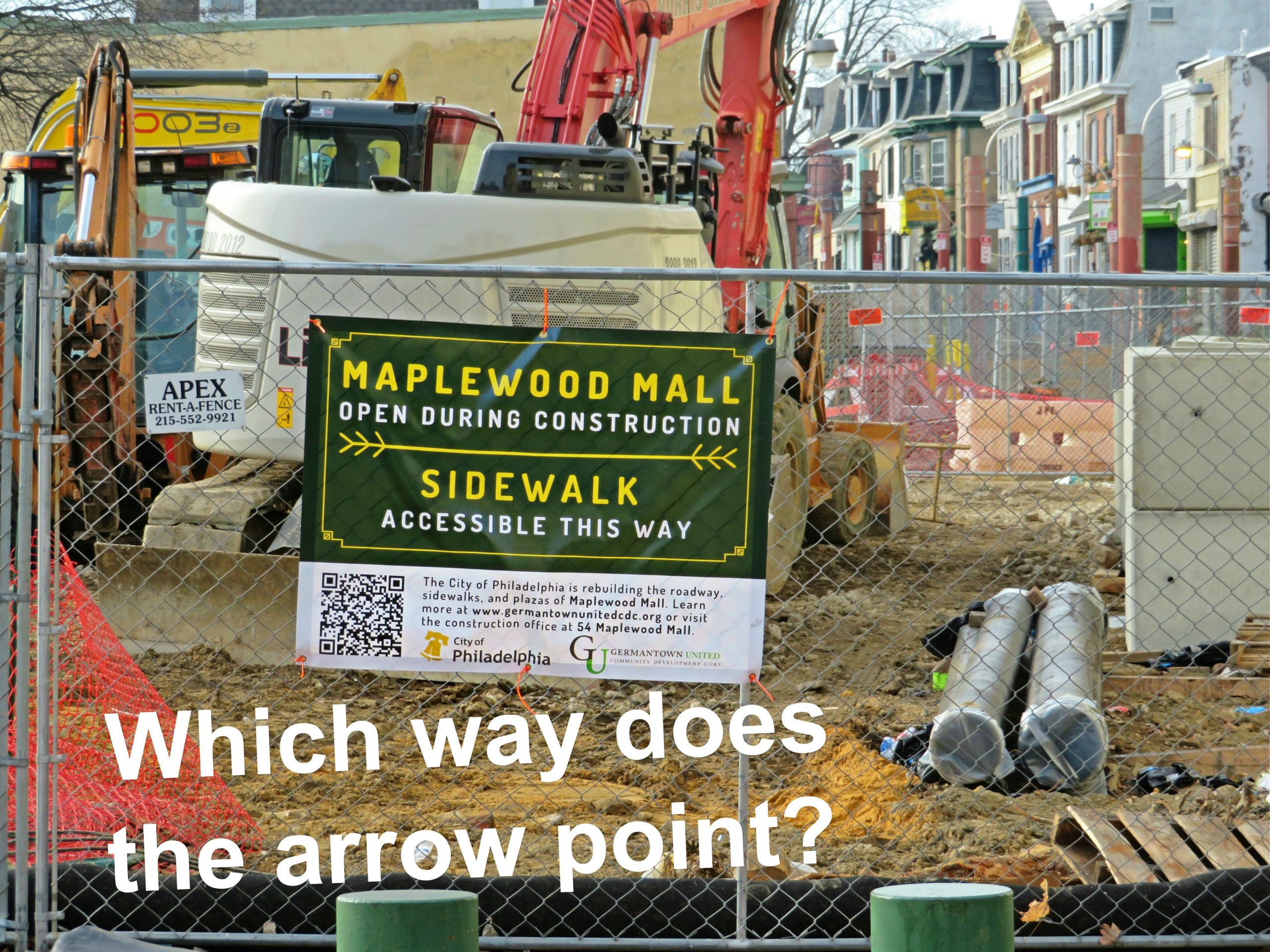 *UPDATE 12/27: Three days after Christmas, new banner signs appeared on perimeter fencing. They’re certainly more noticeable than the sandwich boards but they’re still way too small (and few) to stand out in the jumble of construction around the plaza. And they still read kinda like advertisements for GUCDC, rather than Mall businesses, don’t they?

Redlining and its Effects in Northwest Philadelphia [more…]

Hooray for our evolutionary shell-ebrities!  [more…]