Interesting article in Sunday Inquirer’s real estate section asserts that Manayunk is “still hip, still the place they want it to be.”  When realtors talk about re-emerging corridors and trendy ‘hoods, they praise our next door neighbor for the same kinda stuff we have here in East Falls — only closer to the city and suburbs, to boot.

Yet East Falls remains an overlooked corner of  Northwest Philadelphia, perhaps due to its close-knit network of locals holding the line against the influx of students and “yuppies.” 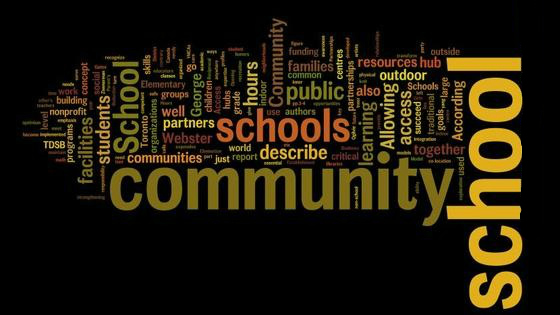 Instead of blaming progress, the trick is to work with developers to create a multi-use community everyone can enjoy.

Lucky us:  Geraldine Fisher (a Masters candidate at the University of Pennsylvania) provides lots of clues in “The Gentrification of Manayunk,” her 2006 Master’s thesis for the Graduate Program in Historic Architecture,

Some history, first. In the 1970’s, Manayunk was essentially a ghost town, Main Street just a stretch of boarded-up business fronts. For whatever reason, while Philly spent the 50’s & 60’s tearing up other neighborhoods in the name of “Urban Renewal,” poor Manayunk was completely overlooked.

But that was a good thing:  as a result, the town’s abandoned buildings retained their 19th Century charm, and caught the eye of developers looking for discount properties to lure artists and students seeking proximity to the city, with lower rents. 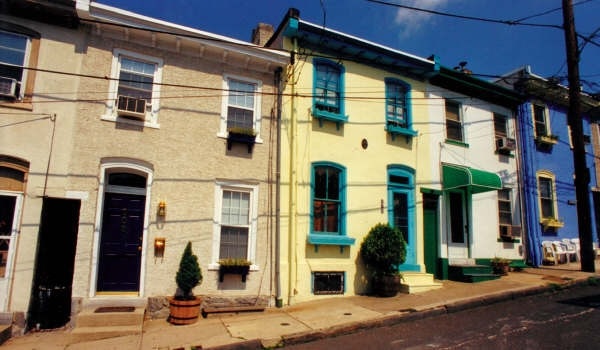 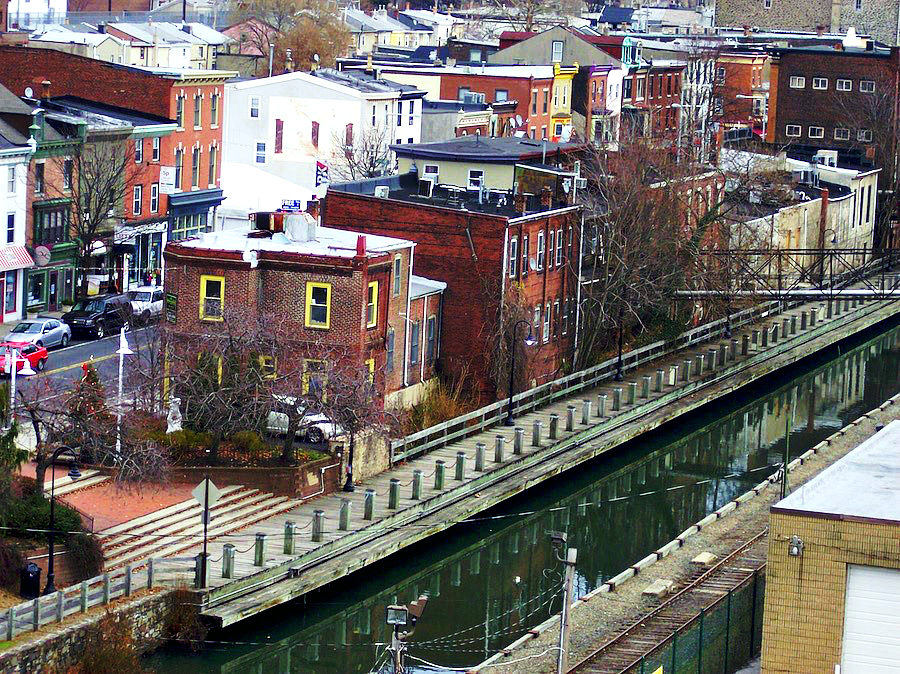 Some would say Manayunk’s gentrification began in 1971, when Philly under Rizzo started sprucing up the Canal & Towpath, or in 1981 when the CanalView bar & restaurant opened, but no one argues that development really took off after Manayunk was listed in the National Register of Historic Places in 1984.

Which wasn’t an accident, by the way. Two years prior, the council commissioned a market study from consultant E. L. Crow on growth potential that would become Manayunk’s bluprint for revival efforts. The Crow report observed:

“Great care should be taken to preserve and capitalize on the quaint, historic, ethnic Mill-town character.” 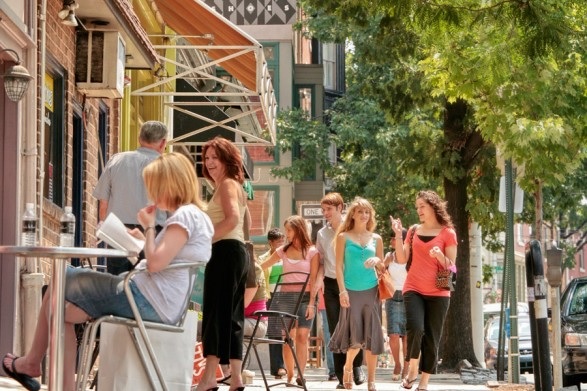 Which is pretty much what Manayunk did, to great success. In 2006, Main Street alone had over 26 bar/restaurants, 11 high-end clothing boutiques, 7 furniture stores, 10 spas/salons, six art galleries and five national retail chains. 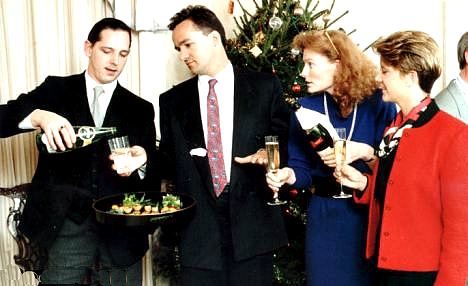 But the noise! The traffic! The bland condos squeezed in wherever they’ll fit!

Funny thing about historic neighborhoods:  people love to shop and eat in old buildings, but living in ’em? Not so much. 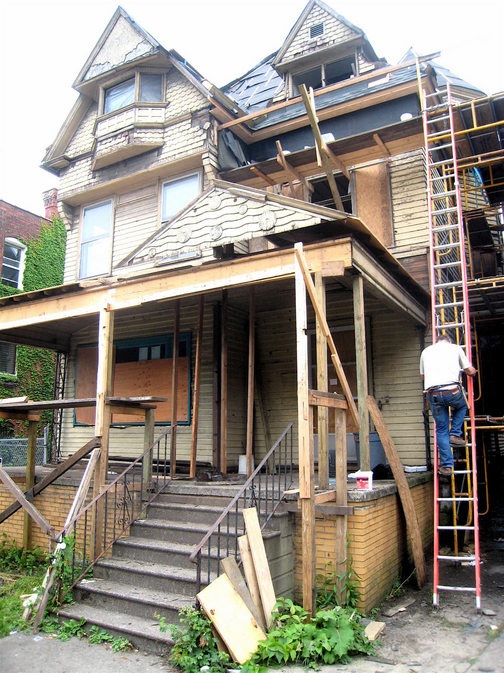 But still:  the vast majority of home buyers seek modern houses. Not just renovated, either — even a completely refurbished old house will have its quirks:  small rooms, retro-fitted appliances, lack of central heating/air, plus more upkeep generally, too.

So developers tear down the old, and replace it with new construction, which tends to lead to a “bipolar” community with two very different populations with different needs.

On one hand, there’s the moneyed professionals who can afford to drive, park & deliver anything the neighborhood doesn’t provide. Then there’s the mid-low income locals on the other, forced to compromise their streets & services for strangers who, let’s face it, can be a little frosty up in their luxury abodes. 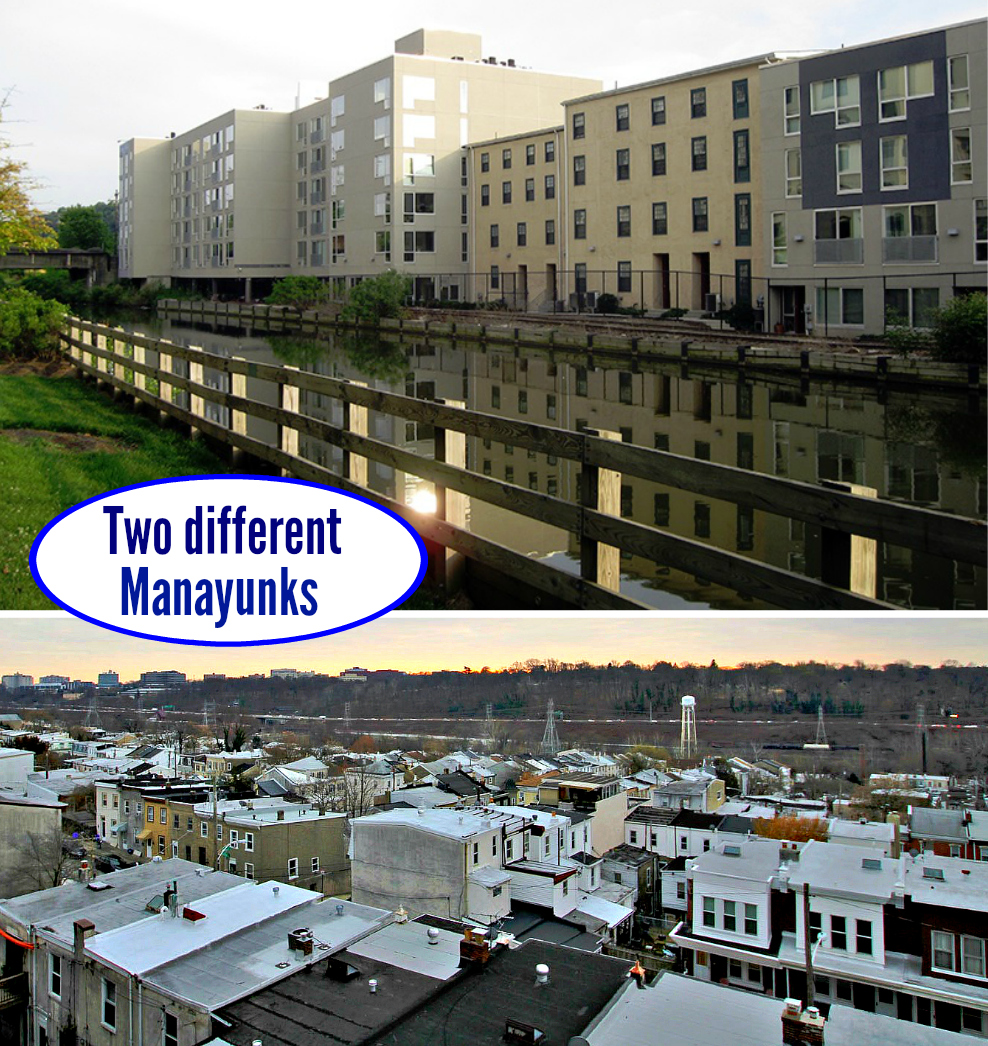 Manayunk listings reflect this unfortunate dichotomy:  you’ll find new townhomes going for $500,000 in less than two weeks on the market, while rehabbed older properties in the $220 – $250k range languish for months. Most of these get rented out to students, 20-somethings, and wage earners, who many locals blame for everything from parking woes to the destruction of a moral society as we know it.

But gentrification isn’t the problem. As time passes, populations naturally change. Right now in our area, there are more single households than ever before. Couples get married later in life, and have fewer kids. Green living is a big deal, so is walkability and access to nature. 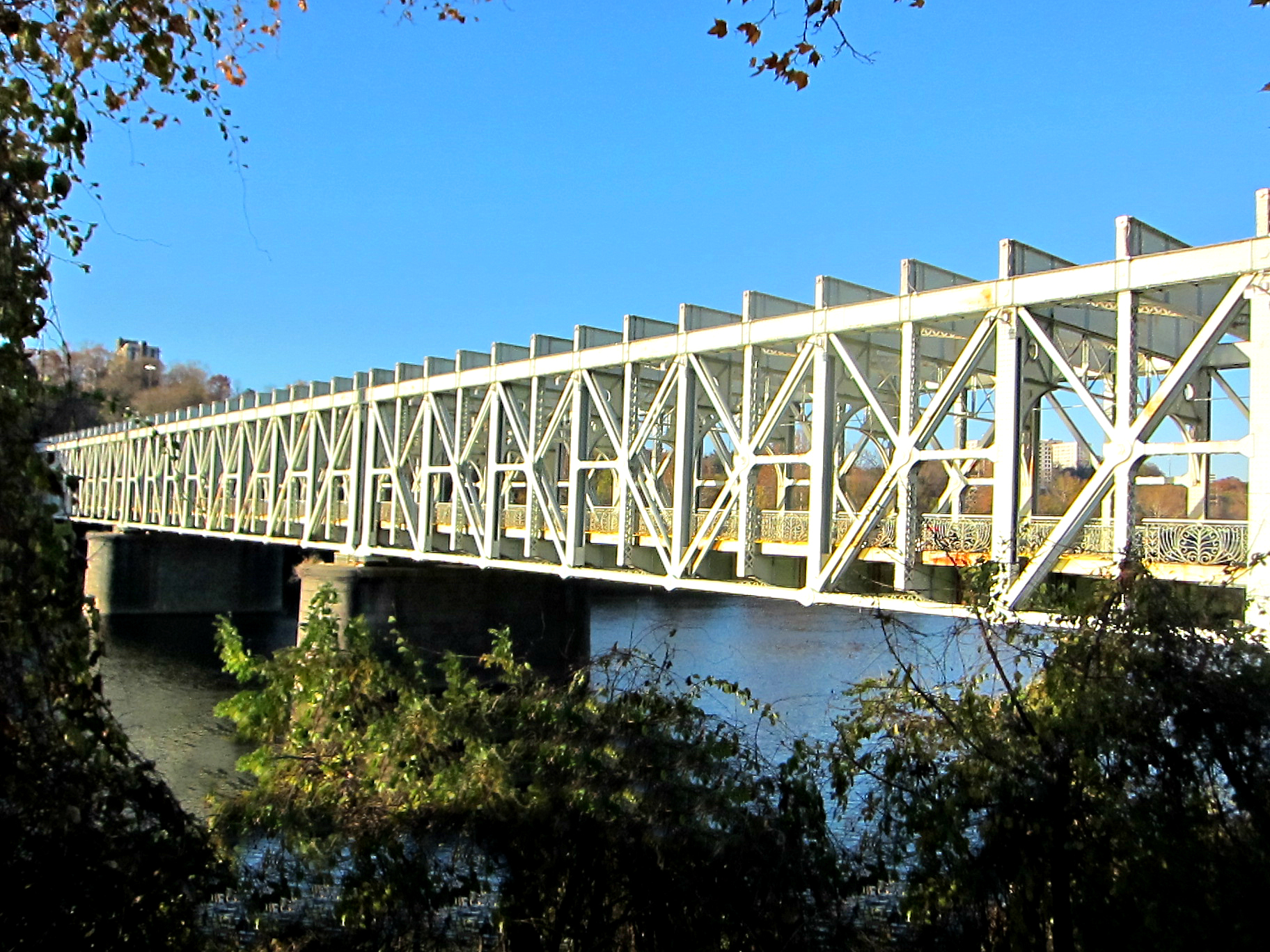 A development-minded community sees empty buildings not as sites for new condos, but as opportunity to create business for new demographics. Trick is to invest some of that revenue towards supporting neighborhood services like hardware stores, pharmacies and grocers, so the people already living there can benefit from the boom, too.

There’s more to Mom & Pop shops than what they sell — these small local businesses are often community landmarks and chatter hubs. Plus, restoration tends to have a “catalyst effect” on nearby properties: one house inspires a whole street, the street inspires a block, and so on the rejuvenation spreads.

If Manayunk has taught us anything, it’s to manage growth without squeezing out the quirky local appeal that drew investors in the first place. Best way to do this? Highlight & support local history in the business corridor.

A recent report by the National Trust for Historic Preservation declares uniqueness & authenticity as keystones for a healthy, multi-use community, like the one quietly growing under our noses here in East Falls:

“Investment in the Historic-built environment offers the best hope for boosting image, increasing civic activism, attracting new residents while raising quality of life for existing ones.”

With some planning and focus, our stretch of Ridge Avenue could be an amazing draw, and create an exciting, livable East Falls for everyone —  gentrification, without alienation.

Location, Outdoors, History:  What Manayunk’s praised for, East Falls has in excess. Kind of a mystery, really, how we’ve remained such an overlooked corner of Northwest Philadelphia for so long. The secret won’t keep forever. The best way to manage growing pains is to strive for sustainable services & streetscapes we all can enjoy. What Would Make East Falls Better?

‘Tis the season for Wish Lists, so why not? Next time you’re walking our streets, turn your eye to local businesses and empty buildings — what’s missing? What kinda establishments should we have, that we don’t? Sound off below, on Facebook or shoot us an email.

East Falls does, in fact, have a plan. The East Falls Development Corporation (EFDC) has been consulting with the Community Design Collaborative  and local business owners to restore our historic storefronts along Ridge Avenue.

The Collaborative has already provided grant money and the EFDC is working with local businesses to secure Commerce Department grants for further improvements.

Now’s a crucial time to keep our eyes on new developments and make our opinions heard.

Art is a Four-Legged Word in East Falls

Why facts can feel so mean and condescending [more…]