The big news out of last month’s East Falls zoning meeting (via Zoom) was a heavyweight development proposal; a five story, 185-unit apartment building at the corner of Ridge and Merrick. It’s bigger than David Grasso’s proposed 140+ unit development near the Falls Bridge, but only half the size of Dobson Mills at the other end of the East Falls business corridor. Still, quite an addition for an area that’s had recent development across the street (Falls Bridge Lofts and The Overlook). 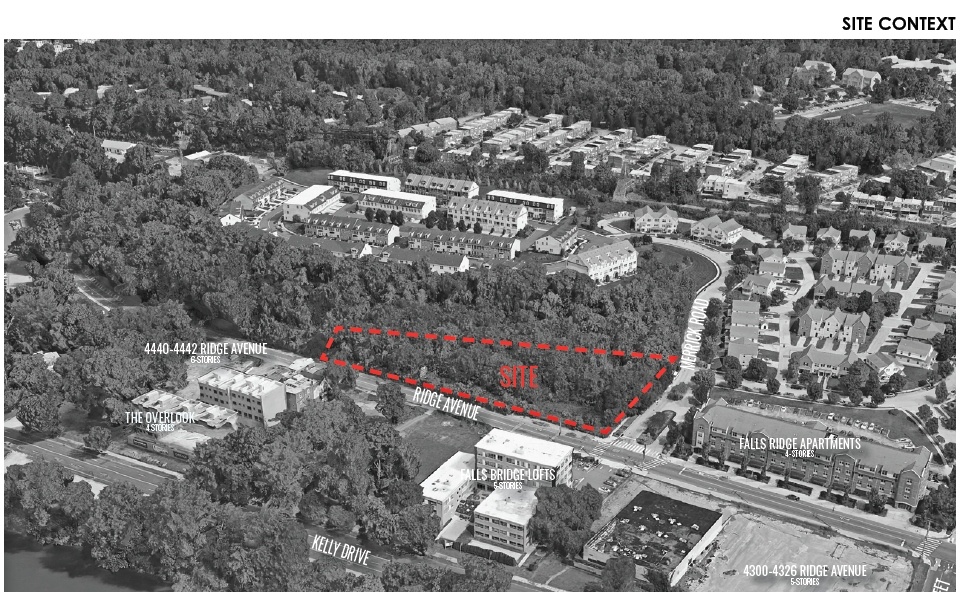 The usual traffic and parking naysayers weighed in (and one neighbor who thought the proposed rendering was an “ugly ass” design) but Sean Whalen, attorney for the developer, Atapco Properties, took it in stride while stressing that the project was early in the process.

“We appreciate the feedback and that’s what we want at this stage,” he said. He added that the project was still “two to two-and-a-half years from completion, even if there are no setbacks during planning and construction.”

In the shorter term (the next few months), there will be reviews by PWD (for water runoff from a “steep slope” section of the property), the Streets Department for traffic flow, and also Civic Design Review (CDR). (The CDR is scheduled for March 2. To join the Zoom meeting, or listen in by phone, click here) 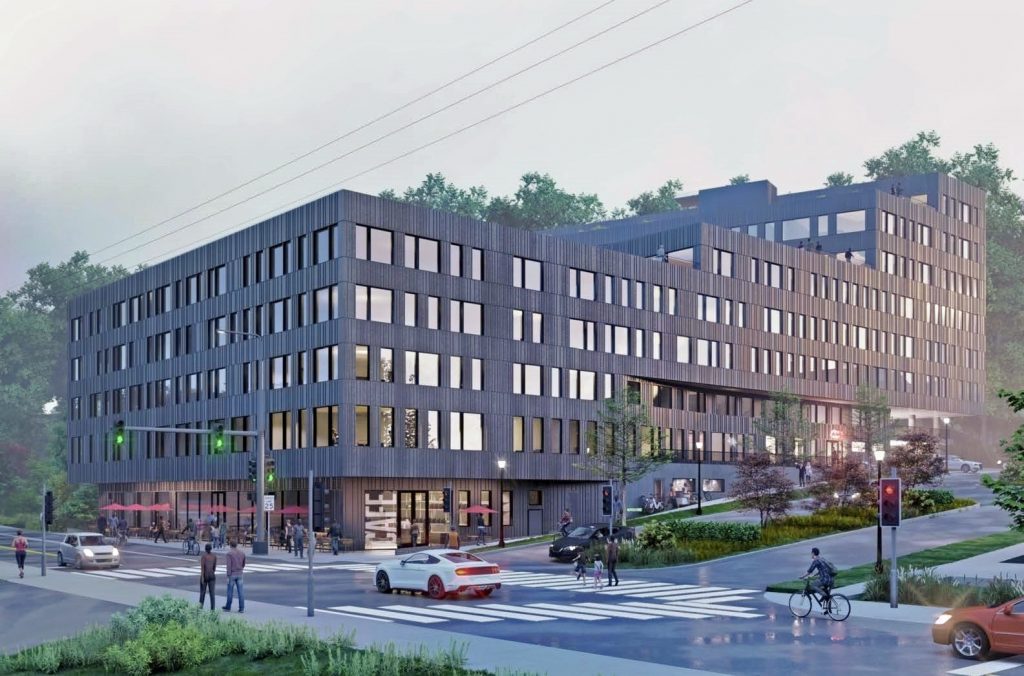 He explained that the CDR Committee is a “formal subcommittee of the city’s Planning Commission. And their scope of review is specifically about form, function, building materials, and the look and feel of large projects exactly like this.” In addition to community feedback, Whalen and the development team sought to explain the two refusals they’ve received from the city, and their proposed solutions, in the hopes they’d get support from local RCOs East Falls Forward and the East Falls Community Council.

Ronald Glenn, engineer for the project, pointed out that the steep slope section of their design is only a small area in the center of the site. He added that “steep slopes are common in Philly (and the Falls)” and that runoff measures are required in many projects throughout the area. He said that the builders will “implement erosion control measures to prevent any excessive degradation of the land and prevent soil runoff from entering the street.”

He added that PWD and the Pennsylvania Department of Environmental Protection would need to approve their plan before the project was allowed to break ground.

According to Whalen, they’ve proposed only one space because it is “significantly oversized. Not only could it fit a full tractor trailer, which we don’t envision coming in at all, but it could fit multiple standard package delivery vehicles, all at the same time.” Given the residential nature of the building, he believed the majority of deliveries would be UPS, Amazon, etc.

Neither refusal seemed to phase neighbors who tuned into the Zoom meeting, but they were very interested in the design, the commercial space proposed on the ground floor of the development and the portion of apartments that might be considered affordable.

Design Overview
You don’t often hear architects describe projects as “fun” in zoning meetings, but Michael Brahler (founding partner of Oombra Architects) obviously enjoyed putting this design together. “The one thing that’s really cool about the site is that it’s heavily wooded, so we wanted to work with that treeline and maintain the wooded feel at its perimeter.”

To ensure that the building didn’t dwarf the trees, he created a “tiered approach” that stepped up the hill, spreading out the structure as opposed to doing “a very long and monotonous street wall.” The “multiple tiering” approach also made the building seem smaller from the street level, massing at the farthest point from the street. Another benefit of tiering? “Our height is in line with the projects around us, we are actually below the tree line and the houses on the ridge above the site.”

Notwithstanding some of the negative comments made about the zinc exterior of the design, Brahler felt the material had an inherent beauty in that its silvery quality catches light differently at different times of day and it develops an attractive patina as it weathers over time. He also felt the metal gave the building a more “handmade feel, rather than a slick skin.”

Commercial Space
The COVID lockdown has changed the approach for developers regarding commercial space, in Whalen’s experience. “In the pre-COVID world, a gym or a café was almost guaranteed in a development proposal.”

Not so much in the last year, leaving the 4400 square feet in this development to be determined. “The café idea could still work” he said, given the ample patio space (2200 SF) outdoors. “and we won’t be in lockdown forever, he added, and certainly (hopefully) not two or two and a half years from now.” He felt the commercial space could be filled by one business, or even multiple businesses. “1,000 or 1,500 square feet is a good size for a small business.”

Affordable Apartments
Several commenters wondered about the prices of the units and how affordable they might be for those living in the neighborhood. Dan Spitzen (VP of Acquisitions for Atapco) replied that there are a range of units with starting price points he guesstimated in the “low- to- mid $1,000 a month range, obviously going up for our two-bedroom units.”

He added that they haven’t done statistical analysis yet “regarding the affordability percentages” given that the building won’t be completed for a couple years. The goal, he added, is for a “market rate project.” In response, one caller expressed her hope for “as many affordable apartments as possible for those with lower incomes.”

East Falls Forward‘s video above features developer’s presentation with commentary from planning/traffic/etc experts who are also EF neighbors. This project is slated to go before Civic Design Review March 2nd, residents and businesses please visit eastfallsforward.org to vote for or against allowing this project’s variance requests and also leave your comments for the public record.

Tale of the Tape
The specifics:

NOTE: This project has also been presented to East Falls Community Council, you can view that meeting here.

Deal or No Deal?

Was there a legal agreement that 30 market-rate apartments would be built on the Ridge and Merrick site? (Spoiler alert: Nope!) Setting the record straight on Ridge.

During an otherwise informative and transparent zoning meeting last month, an old neighborhood myth about a legal agreement for the Ridge and Merrick site reared its head again.

We first heard this story in 2015 (though it’s apparently been circulating for a loooong time in the Falls), and turned to Gina Snyder, the Executive Director of the East Falls Development Corporation, for the straight skinny about the site – known at the time as the Pennrose Development.

(Check out her article about the site’s history — and a link to the 2006 legal agreement between PHA and the community — “Setting the Record Straight on Ridge“.)

People in the neighborhood sued to have what was promised to them by PHA 20 years ago when the old public housing (Schuylkill Falls Housing Project) was demolished. They wanted to have a mixed income community with both rental and homeownership. Ultimately, the lawsuit was settled in a Settlement Agreement that was signed and filed in federal court. As a result, you now see Falls Ridge and the Hill Top at Falls Ridge.

In the Definitions section of the Agreement, the development was laid out as Phase I, Phase II and Phase III and referenced a development plan map.

Phase III was defined as a 30 units apartment building. Then, in the Agreement section where PHA made its enforceable promises for the development, only Phase I and Phase II were promised. These phases have been built: the senior citizen midrise (50 units), family subsidized rentals (85 units), affordable homeownership (34 homes), and the market rate Hill Top at Falls Ridge (123 homes).

The Settlement Agreement has been fully complied with.

Yes, Phase III was discussed and was on a plan 20 years ago, but at that time it was an idea and placeholder on the plan. This happens a lot in the development process. What would happen in Phase III was not agreed to in the signed Settlement Agreement in court. Subsequent to the Agreement, in fact, HUD struck the 30 units from the development plan so that the plan now reflects the Agreement. This allowed PHA to open the site up for market development as it has done.

The majority of the plaintiff Agreement signers supported the Pennrose development.

East Falls doesn’t often set style trends but this weekend, all eyes were on nails by Koco after a write-up in Sunday’s Inquirer.  So this weekend as hoards of beer lovers descended on our neighborhood for [more…]

His Music is Da Balm

Music can soothe your troubled spirit and heal an injured heart. Local landlord/hip-hop artist Noah Accorsi’s album “Every Day Counts” reminds us that happiness is a choice we make — not just for our own [more…]