Residents rally at McMichael Park to support the BLM cause. 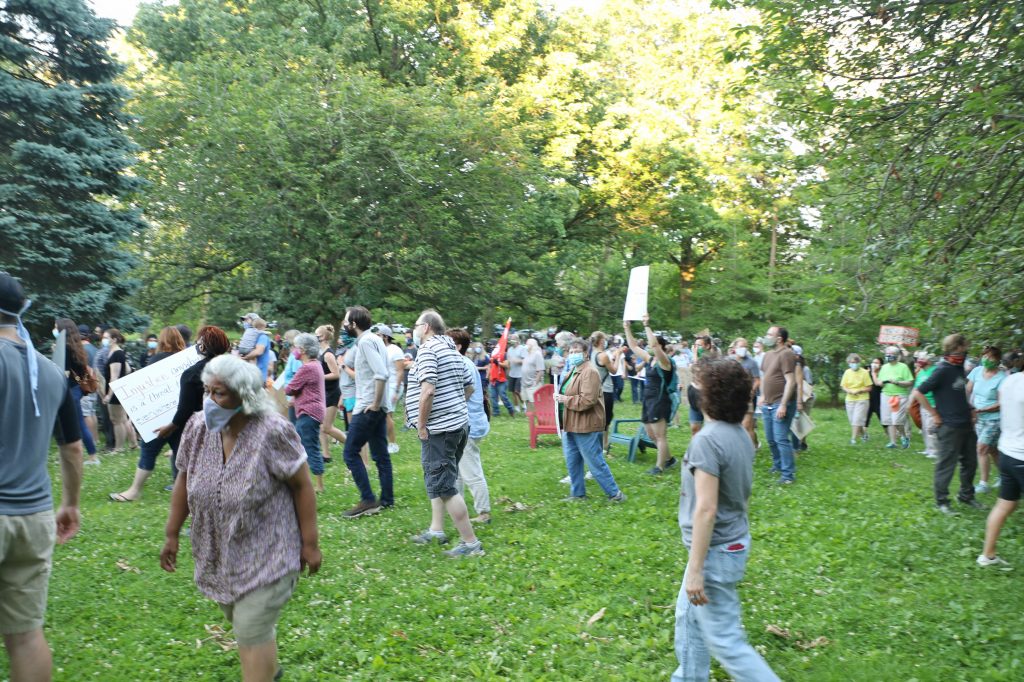 Hundreds gathered last month at McMichael Park in East Falls in memory of George Floyd and to support the Black Lives Matter movement.

The social distancing and masks did not dampen the enthusiasm of the mostly white crowd for the organizers’ speeches, most of which passionately denounced the litany of injustices that police have inflicted on the black community all over the country (and for generations).

I am a resident of East falls. I want to frame the discussion and recognize as a white person, this is not the place for my voice. We’re standing on land that is from Native Americans. We’re standing in front of a memorial for veterans, but not all of those veterans were treated equally depending on the color of their skin. And I live in a neighborhood that is predominantly white.

And that did not happen by a fluke. That is because of federal, state, and local funding that dictated who could buy houses where and who had access to capital. And so it’s our job as a predominantly white community, to own that, to own that, and to work on the undoing. Look around you at everyone who’s come out to be together and to honor George Floyd. So with that in mind, thank you. I think this is a proclamation for us as East Falls to say publicly that yes, Black Lives Matter.

The crowd, led by Darryl Ford, principal of Penn Charter school, then took a knee for 8:47 seconds of silence in memory of George Floyd. African American writer Larry Benjamin, a long-time resident of East Falls, wrote about his experience on his blog:

My husband and I attended a protest last night at McMichael Park in our East Falls neighborhood. It was peaceful and it did my weary heart good to see so many neighbors—of all races and hues and ages—turn out to protest. I would have expected no less from my neighbors.

Derek Chauvin is an absolute monster. He is inhumane. He should be put down like a rabid dog. I would suggest that the prosecution ask the presiding judge and the jury to kneel for eight minutes and forty-seven seconds. And then ask them to pass judgment. Derek Chauvin would be found guilty, his crimes finally named: racism, malicious intent, murder, inhumanity to man. 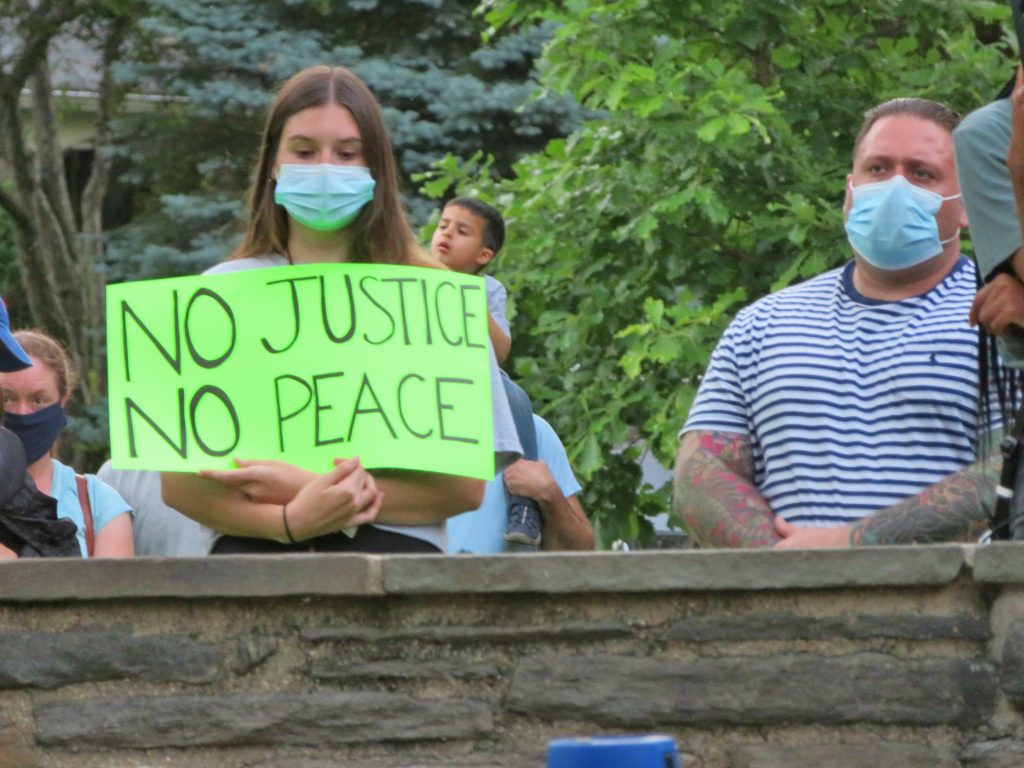 Several speakers followed, including preachers, a Vietnam veteran, and Dinah Hayward, from Councilman Curtis Jones’ office, who spoke fiercely about ending the school-to-prison pipeline and the “commodification” of black bodies. The crowd then marched along the streets bordering the park with their signs held high while chanting and echoing an angry call and response “Say his name! George Floyd! Say her name! Breonna Taylor! Say his name! Ahmaud Arbery!”

Online reactions from the Falls:

Jason B. Amazing turnout it felt amazing to see BLM IN MY OWN COMMUNITY

Tom B. Proud of our community. Let’s keep it up. Forever.

Barbara B. This was well done and well attended. Nine minutes is a long time to kneel. RIP…..the many.

Anita D. Thank you to the organizers and community. Peaceful, social distancing and the young woman from Curtis Jones’ office was excellent. The last minister was also powerful.

Jessica B. Yes, she was truly excellent! Proud of the Falls.

Gretchen S. All right East Falls!!! Grew up here and played in McMichael Park. So proud!

Mary W. So proud of my old neighborhood and all who turned out.

Anne N. Thanks to the organizers and to those I saw there. This moment gives hope because people all over the country, in great cities (like ours) and small neighborhoods (like ours) are giving it our strength.

Next Steps?
There was some online chatter about next steps to keep the BLM message rolling in the Falls but nothing definitive yet. We hope that more white voices are encouraged to speak about white privilege and how it’s benefited them personally (thank you Corinne for getting that ball rolling). People of color have been calling out racism for hundreds of years – it’s way past time for white people to acknowledge our part in maintaining that system.

Luckily, that movement seems to have started. The most inspiring part of the recent rallies has been the participation of white people and the growing realization among us that the system rests on the silence/acceptance of those of us who have the luxury to choose how much we’d like to get involved.

To paraphrase a friend we’ve begun working with on diversity and inclusion training – “when the trainings are over, white people can go home and choose what they’d like to do next. They have that luxury. People of color live with these racial dynamics every moment of every day.”

Instead of an MLK or Malcolm X quote to inspire local supporters of BLM going forward, we thought we’d share a favorite quote from a 19th century white man, William Lloyd Garrison. Garrison was an American abolitionist, journalist, suffragist, and social reformer. He is best known for his anti-slavery newspaper The Liberator, which he founded in 1831 and published in Boston.

“I am aware that many object to the severity of my language; but is there not cause for severity? I will be as harsh as truth, and as uncompromising as justice. On this subject, I do not wish to think, or to speak, or write, with moderation.

No! No! Tell a man whose house is on fire to give a moderate alarm; tell him to moderately rescue his wife from the hands of the ravisher; tell the mother to gradually extricate her babe from the fire into which it has fallen; — but urge me not to use moderation in a cause like the present. I am in earnest – I will not equivocate – I will not excuse – I will not retreat a single inch – AND I WILL BE HEARD.”

Full House in the Falls