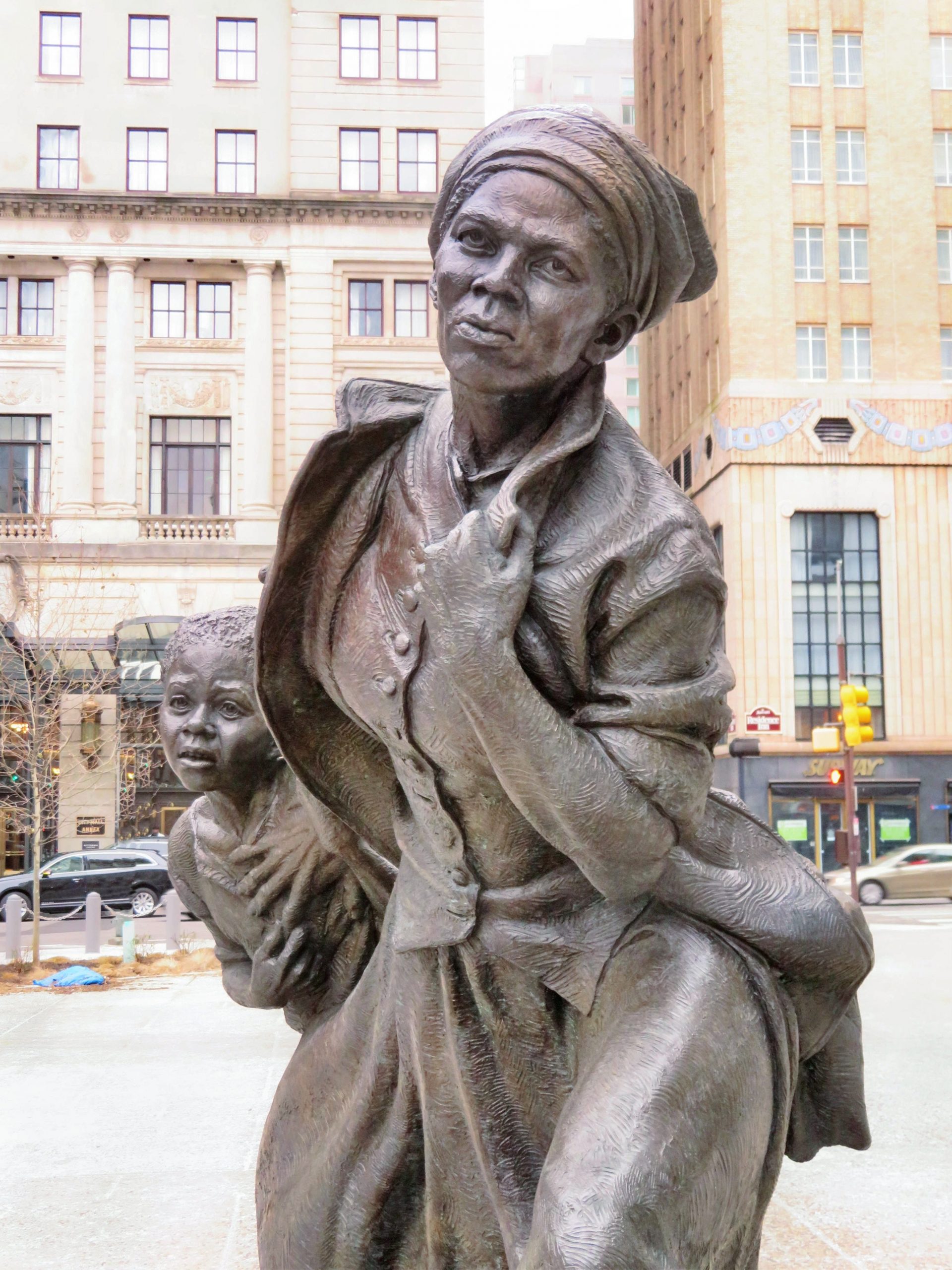 The Harriet Tubman sculpture at City Hall is a milestone in Philly public art  – too bad she can’t stay.

Now that’s a statue! Next time you’re in Center City, make sure you seek out the new Harriet Tubman monument on display in front of City Hall’s “north apron” (facing JFK, near Juniper). Created by a former Hollywood special effects artist, this 9 foot tall, 2,400 lb bronze sculpture is packed with drama, capturing Harriet Tubman leading a young enslaved girl across a perilous precipice to freedom. While oversized, the statue is set low enough so you can walk right up and practically step into the action. Come face-to-face with the steel resolve in Harriet’s eyes. Chills.

There’s another reason this monument gives us goosebumps: it’s the very first representation of a historical Black woman in Philadelphia’s public art. And she’s only our third historical woman to date  – the other two are Joan of Arc and Mary Dyer, neither of whom are local gals. Harriet Tubman however has a Philly connection, as the city she escaped to when fleeing bondage in Maryland, and a place she’d come to stage and return from rescue missions.

So, welcome Harriet Tubman, right?! Except…. She’s only here until the end of March, a project of Philadelphia’s Office of Arts, Culture and Creative Economy to recognize Black History and Women’s History months. When we heard that, it was like “Gee, thanks… I guess.” In a city with so many old white dudes immortalized on pedestals, how unfair it seems, that other narratives only get a temporary nod in our civic landscape.

In a recent editorial for BillyPenn.com, local artblogger & influencer Conrad Benner distilled this issue so clearly, when he asked the implications for residents and tourists alike who see “statue after statue” here lauding the achievements of men (almost all of them white). He asked, “What does it mean when only the historical contributions of white men are honored in our public space?” 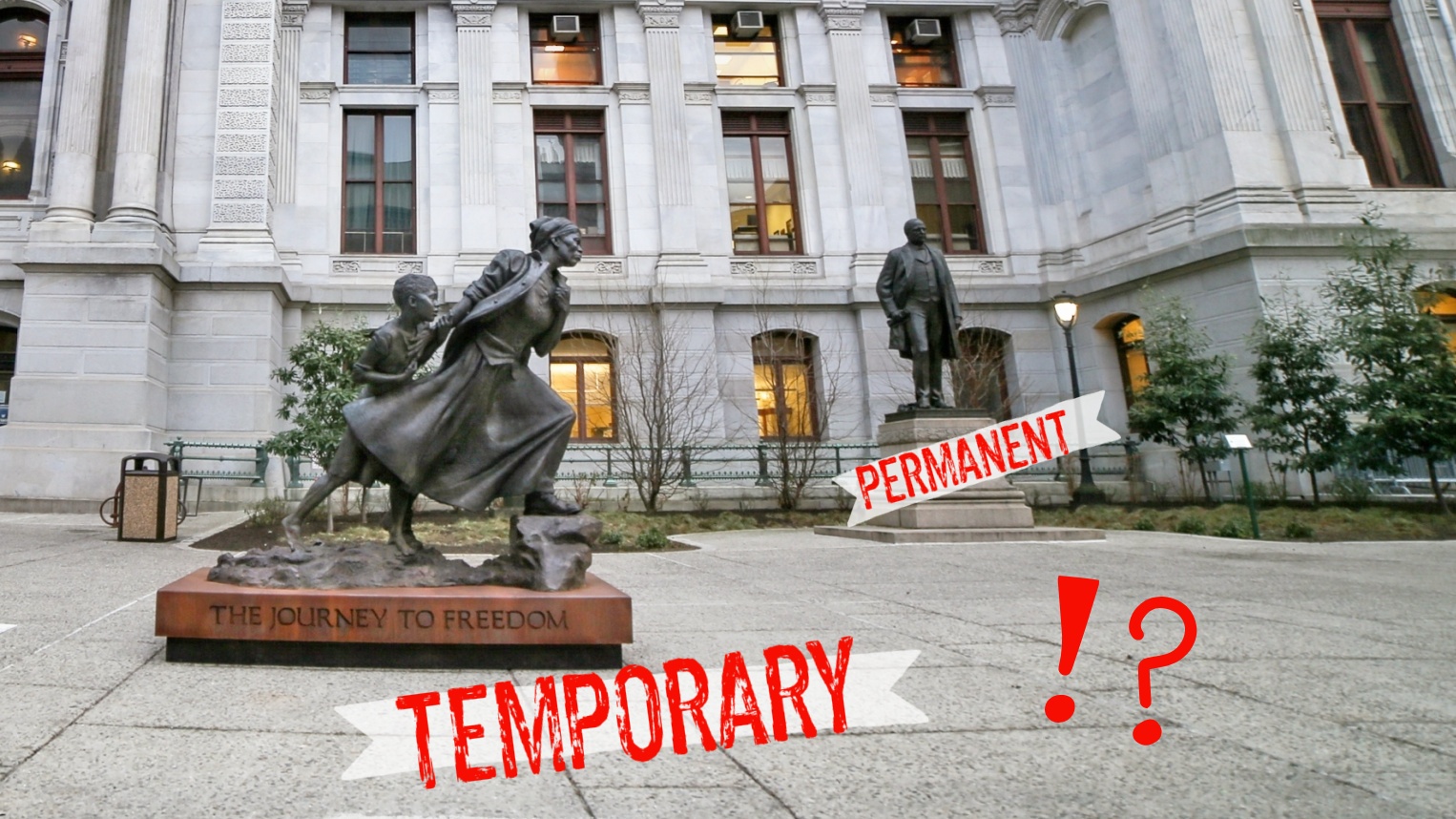 There are many forms of public art — murals, sculptures, graffiti, and street art among them — that can hold a mirror to society and offer beauty, introspection, and connection to our world.

But monuments as we know them have a fairly straightforward job: to reflect back the histories we collectively deem are worthy and critical to remember. History can feel infinite, but public space is not. The choice of which histories, figures, and lessons from our past we choose to elevate is incredibly important.

Monuments are distinguished by their staying power and stature. A larger-than-life-sized statue made of heavy materials like metal or stone projects a sense of permanence that murals can not…

White men are not the only people who contributed to the history of Philadelphia and the United States. That is such an obvious truth it feels silly to say, but it’s a truth not given dignity when it comes to the monuments providing narration as people move through the city.

Tubman and so many other history-makers deserve to have their memories stand in our public space. An ephemeral tribute is nice, but far from enough.

We’re proud to feature Conrad’s thoughtful piece in our February edition of The Local newspaper, thanks to a shared content agreement through WHYY/News & Information Community Exchange. Please click through to BillyPenn.com for Conrad’s full essay plus great links, especially the streetsdept.com articles (so full of delicious local art). 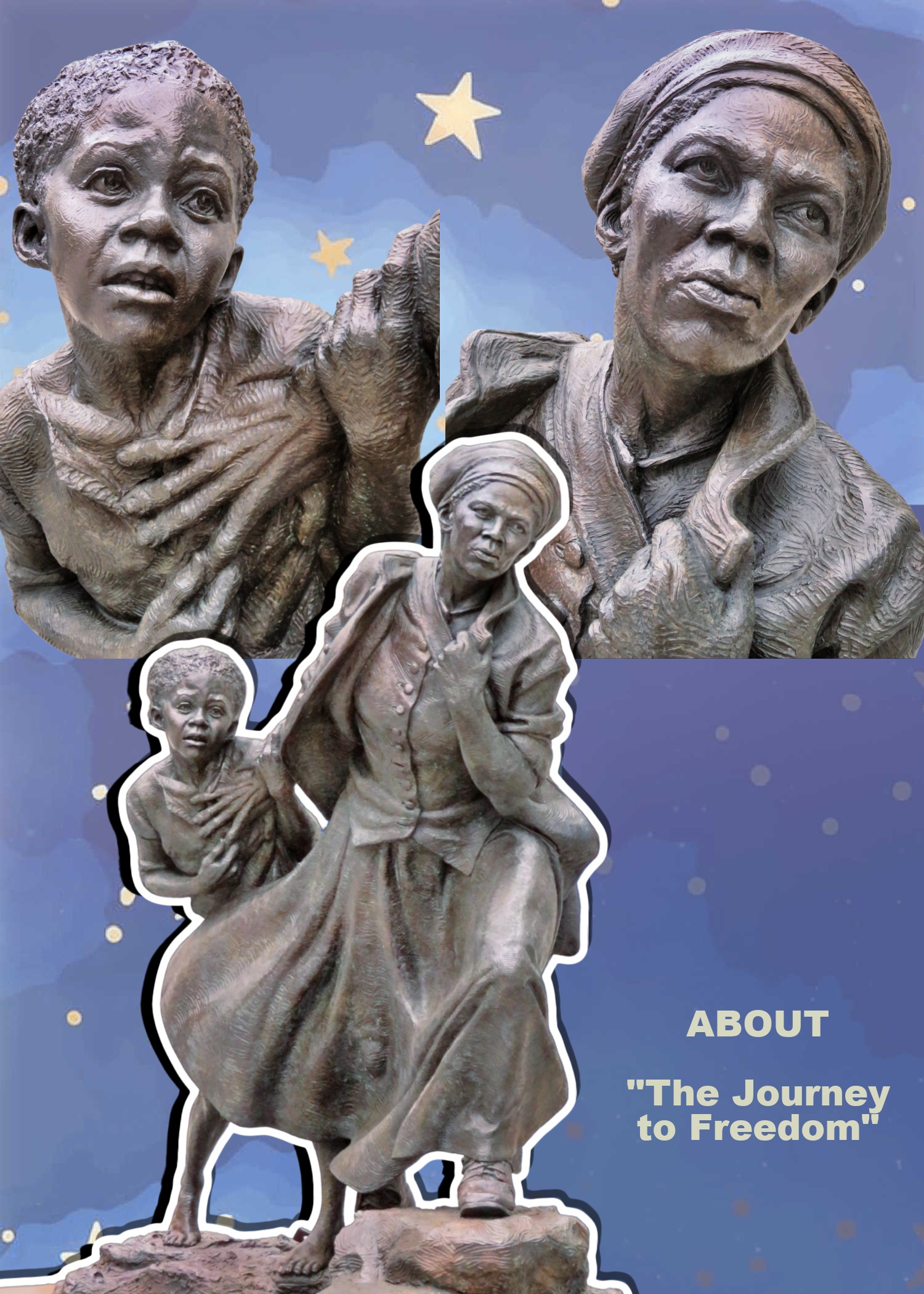 3-19-22 UPDATE: Whoo hoo! The city has announced we’re getting our own permanent statue of Harriet Tubman, after all! The new Tubman statue — which will cost about $400,000 and placed somewhere in the vicinity of where the temporary statue of Tubman is now thru March 31st. Same sculptor, too. Wesley Wofford told the Inquirer that he’s proud to use art to make social change: “If I’m going to spend 18 months on an object, I want that object to make a difference in the world.”

The new Harriet Tubman statue is slated to be ready around November 2023.

ABOUT CONRAD  Conrad Benner is the Founder of StreetsDept.com. A Fishtown, Philadelphia born-and-raised photo-blogger, curator, and podcaster, Conrad’s work explores art, our public space, and the creative minds shaping the world around us.

Nervous neighbors sound off while awaiting the Chauvin verdict.  [more…]