Trending Philly photoblogger on how street art connects and uplifts us

Digital platforms can connect us in remarkably intimate ways, but none can provide the plain thrill of walking down a busy city street. The sheer randomness of things you see and faces you encounter — the dazzle of possibilities — when life is unfiltered by algorithms.

Nobody understands this better, I think, than Conrad Benner. His photo blog, Streets Dept, celebrates art in our built environment, and as a creative force in our communities. For more than a decade he’s been documenting the city’s thousands of commissioned pieces and countless private installations, big and small. Not just murals, either, there’s sculpture, yarn bombing, wheatpaste, mosaics, tiny rowhomes…

Conrad also interviews artists, hosts podcasts, publishes a newsletter and engages with almost 200k followers. He’s been featured in The Guardian, Time Magazine and Encyclopedia Britannica – he’s literally one of the world’s most influential street art advocates, with a regular spot on WHYY called “Our Space,” that covers topics from accessible dining to Billy Penn’s penis with an informative and inclusive approach.

Conrad’s also a partner through WHYY’s News and Information Exchange program, aka “N.I.C.E.”, a journalism collaborative that seeks to amplify grassroots voices through the din of mainstream media. As we return to normal in post-pandemic Philadelphia, public spaces feel more important than ever. “Public spaces are what connects us, “ Conrad said in a recent Instagram Live interview, “Our shared spaces are powerful tools for building and supporting a more equitable city.” 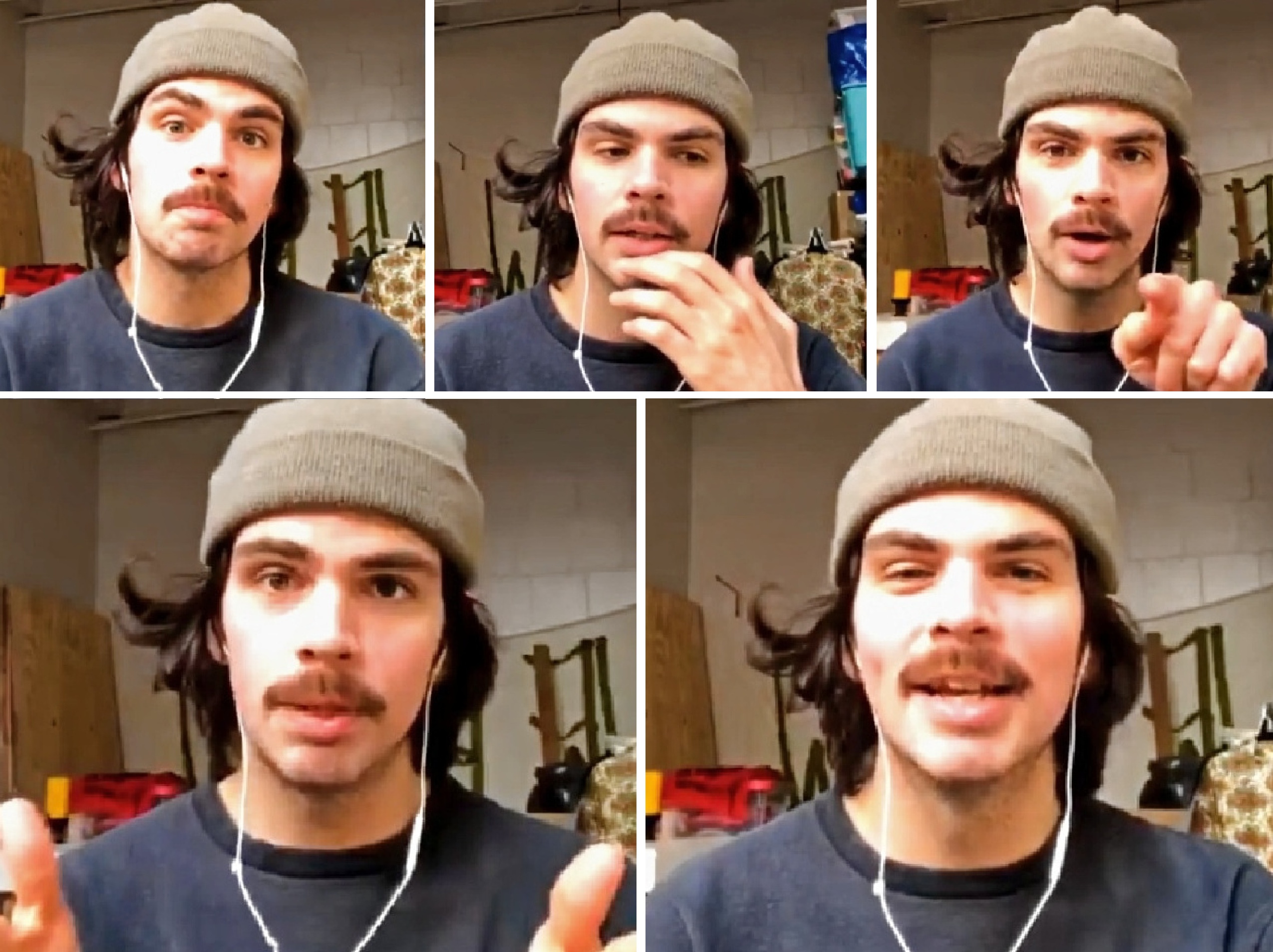 This Q&A has been edited from that March 2021 interview, plus a follow-up phone call.

Q: What do you and Streets Dept bring to Philadelphia news, culture and information that no one else does?

I really believe deeply in the power of the public space. There are so few things that we all own as, as a population living in a particular area. And our public space is one of them. What we can enjoy together as a community really says a lot about who we are as people. When we decide to fund public playgrounds, libraries, parks and mass transit — it shows our preferences and attitudes about other people.

If you’re a capitalist, then it’s even good for the economy. When cities invest in public amenities, people are going to want to move there, bringing new workers and customers. There’s no good reason not to invest in the public space. We need common ground more than ever.

Q: How does preservation factor in?

It’s so interesting. For the first time in decades, Philadelphia is growing, thanks to our incredible immigrant communities, which are thriving. For years our population had been declining and now it’s getting this great burst of energy which is awesome. But as we grow, we need more homes so some of our murals are going away.

Philadelphians get really attached, some of them become beloved landmarks.  Noam Chomsky on Fairmont Avenue. Ursula Rucker. And now the Gloria Casarez mural.  It’s tough. There are 4000 walls with murals on them, so this is part of the game. People own these walls, but the art belongs to everyone – where’s the line?

Cities are always going to be changing. That’s just a fact. Anyone can look around and see we need more housing. I think a report just came out that we’re at 5.5 million home deficit in this country. Since the housing crisis of 2008, construction rates have been pretty low. In a city like Philadelphia, we have so many single family homes and not enough apartments and other options. So in the interest of affordable housing, certain walls are gonna go away. We can’t be too precious with this stuff.

Q: How can we advocate for public space?

We need to ask more of what’s being built. For instance, the renovations at Headhouse Square. It’s hard to imagine a less inviting space, it’s basically a parking lot with very few places to sit. When there’s an event, it can fill with seating, tables, security, whatever but otherwise it’s not supposed to be used, because kids and unhoused people. Public property designed essentially for private use is a really disturbing trend to me.

Ed Bacon famously skated in Love Park as a protest against this ridiculous idea of government and private partnerships dictating what we can do in a public space. That’s just not how society works. It’s not how public space works. Public space is a resource for people to use however they want.

Now every public space is designed so you can’t skateboard. And here with the dirt bikes, they’re suddenly illegal, and the City’s after them, but, like — motorcycles are just as loud. Why aren’t we up in arms about them?

Look, there’s a million and a half people in the city. We’ll never have one homogenous society. People are gonna use the public space however they want – we should welcome this, as long as they’re not hurting anyone.

The public space is one of the few experiences in modern American life where there’s no commercial exchange — it’s a free gift of being a resident in this city. And an important one, right? There are so many studies that show when people have access to nature and public spaces have better mental health outcomes and overall physical health. There’s just so much goodness that comes with investing in public space.

Q: Do you get much pushback on your opinions?

It’s so funny to hear through the grapevine that the planners didn’t like my piece on Headhouse Square. But if people didn’t agree with it, they wouldn’t have shared it. So many commenters were like “I was in that meeting, I heard the woman say she didn’t want benches because of ‘homeless people.’” It’s so transparent and disgusting. Imagine being so heartless that you live in a fancy house on Rittenhouse Square but you’re worried about someone resting on a bench more than a block away from you.

South Street is one of the most visited streets in the city. People spend their hard-earned money there, we need to give them public assets: a park, restrooms, shelter, whatever it may be. If you’re really worried that much about unhoused folks, fight for affordable housing.

I am really interested in having news organizations from all around the city take a crack at our City budget. We’re spending all these tax dollars every year, where is this money going, exactly? We should put our heads together, find out.

I was in on all the zoom calls about the budget — there were several — and it was just hours of people saying “Don’t defund the arts! Please rethink policing!” again and again and again. And then Kenney’s budget came out and he basically did next to nothing with police, in my opinion, and defunded arts to boot.

And that’s a problem when the mayor gets so much money from FOP. Since 2020 the majority of us I think agree that we have a problem with our current system of law enforcement. Police are asked to do way too much, and then covering up their failures. People are dying, predominantly Black and Brown folks. If it’s not the morgue, it’s the prison – we incarcerate more people here in the US than any other country. It’s bananas.

We’ve been through a pandemic, we’re facing all these budget shortfalls – but yet we’re giving our police force like $700 million a year? Something like one out of every five dollars of City money goes to the police. I can’t see how we’re OK with this.

Q: What’s a subject you’d like to see addressed via public art in the city of Philadelphia?

I think maybe one day there should be a monument or a mural or something around 676, you know, when the city teargassed hundreds of peaceful protesters marching for social justice. It was a terrible decision that day. For the people who try to say they were asking for it because they were blocking a highway – stop. Our roads belong to us. And our public art should reflect our values which last time I checked includes a right to assemble. I would hope that if there are big human rights rallies again, our next mayor won’t support attacking his own constituents. Public art could be a strong reminder.

Q: What’s your take on the art situation in East Falls/Germantown?

Imperfect Gallery did these wonderful murals during the pandemic and held outdoor exhibitions that I thought were so cool. They’re one of the handful of public art projects that I documented during COVID.

I love how that project gave artists opportunities to work during a really challenging time and also to reflect the community’s hope and determination to push through together. I’d love to see more stuff like that. I wish they could do this every summer.

And then to contrast that, we have the Mural Arts Philadelphia program, which has been going for 37 years, one of the biggest and oldest public arts programs in the country. Also the Association of Public Art – another legacy organization doing gigantic work across the city. So at all levels, we have a culture of art and public space, an understanding that there shouldn’t be any barriers between people and artistic expression. I love it.

Where’s your favorite place to hang out in the city these days?

That’s a tough question — it changes all the time. I feel really lucky that I can take regular long walks around the city, like five hours of just wandering. I’m usually looking for street art, probably listening to a podcast, just walking wherever. It really does depend on the day. I think if you ask me right now, I would love to go to FDR Park and just lay in the grass for a few hours. I’m new to South Philly — I grew up in Fishtown, lived there my whole life. Now the last two years I’ve been in South Philly and I’ve only just discovered FDR and the Lakes. Such a great spot.

I try to take one trip a year where I run around a new city and check out all their public art, try to understand how they organize and invest in their common spaces. One thing these regular visits have taught me is that Philly’s Mural Arts program is really unique. Other cities tend to view local art as a tourist attraction, as a way to focus a dining or business district.

But in Philadelphia, Mural Arts is about creating beauty in every neighborhood. They’re spread out all across the city, it’s very democratic here. The art really feels like it’s for the people. We’re fortunate to have a special relationship with art here, and I love being able to celebrate and explore that with Streets Dept. 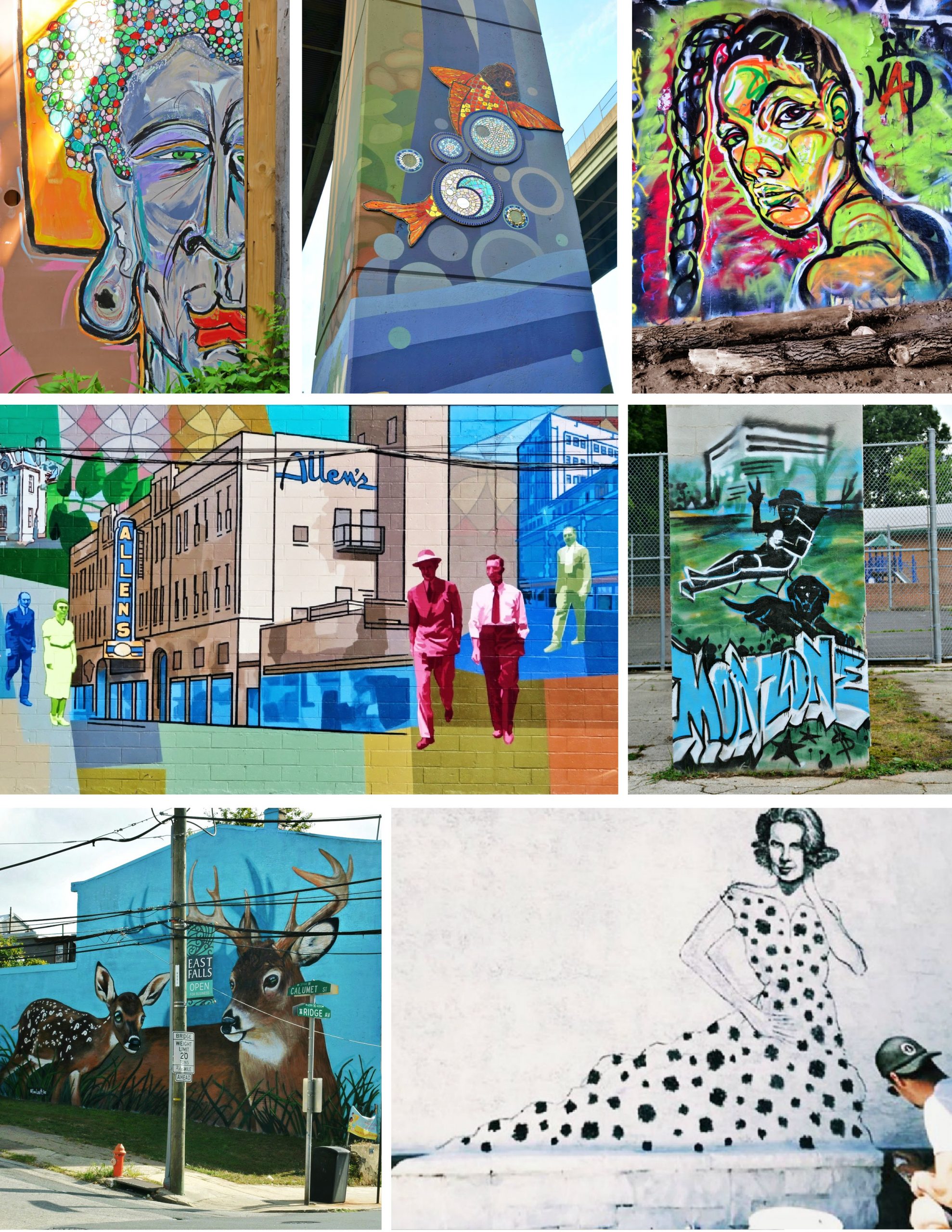 There’s a ton of intriguing art in our Northwest corner of Philly, please enjoy our collage* of local public art here but also make sure you follow Streets Dept for spectacular scenes across the city:

About Conrad Benner 2 Articles
Conrad Benner is the founder of StreetsDept.com, a photo-blog that discovers art on the streets of Philadelphia. The primary focus of Streets Dept is documenting and celebrating street art and muralism across Philly’s public spaces. Conrad is also a partner in WHYY’s News & Information Community Exchange (N.I.C.E.). Follow him on Facebook, Instagram and Twitter @streetsdept. Email: StreetsDept@gmail.com