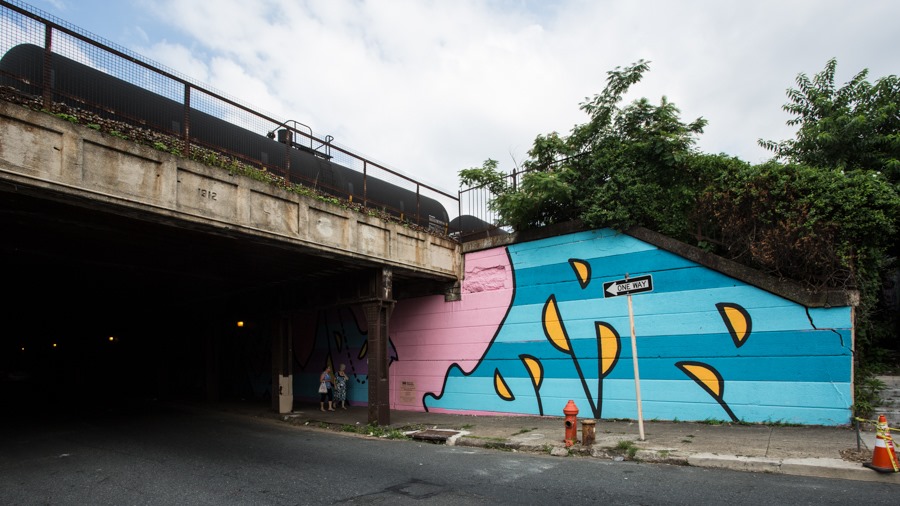 Germantown residents are chock full of pride in their neighborhood and their roots. With that pride comes the desire to show off the community’s best, bring to light the wonderful things it has to offer. But how to best tell this story? For Philly’s Mural Arts Program, large, colorful works of art best capture the spirit of Germantown – a community with one of the richest art traditions in the city.

After a successful mural project at 35th and Allegheny, the Mural Arts Program has ramped things up this time with not one, not two, but three large scale murals planned for the Wayne Junction area of Germantown.

“Basically, we want to create something that really ties together the neighborhoods of Nicetown and Germantown.” said Phoebe Bachman, Project Manager. “It’s really on the border between those two neighborhoods, and that was a request from residents in that area”, Bachman continued.

Where exactly will they be located? Phase one – the largest mural – will be on Germantown Avenue (near Berkley Street) at a SEPTA overpass. The mural will be on the face of the overpass, as well as underneath it. Lighting will be added as well to illuminate the piece and provide added safety for pedestrians at night.

The second phase will feature a mural on the side of a house at the corner of Wayne Avenue and Berkley Street. Since the lot next to it is vacant, it’s a prime location, providing a wide viewing area of the side of the building.

Finally, the third phase calls for a sprawling mural on a retaining wall on Wayne Avenue just south of Berkley Street.

The reasoning for a three-phase plan is for the ease of access. For the piece on Germantown Avenue, the street will have to be closed while the underbelly of the overpass is painted. Obviously, a street cannot be closed for extended periods, so the artists must work quickly and efficiently.

The selection process for local artists has already begun, with a request for quotation (RFQ) being distributed for bids on pricing and ideas for work. The Murals Arts Program then chose a shortlist of artists, which were voted on at a public community meeting on July 16. (The artists will be announced once they are under contract.)

The artists will be given some guidance from the community for the direction of the pieces, however, much of the creative insight will come from them. Some of these themes include; historic Germantown, ties to the founding of America, manufacturing and industry, underground railroad, and the diversity of people in the corridor between Nicetown and Germantown.

Within a year, residents, commuters and travelers alike should expect the border of Germantown and Nicetown to get a major facelift. An addition like this will give residents yet another reason to take pride in their community.

About Noah Peschio 3 Articles
Noah Peschio is a senior journalism major at the University of Wyoming (graduating fall 2019). He spent the fall 2018 semester in a national exchange program at Jefferson University in East Falls working closely with communication program director Letrell Crittenden. He is interning with The Local for the summer. Noah is passionate about journalism, especially in its power to build community on a local level.