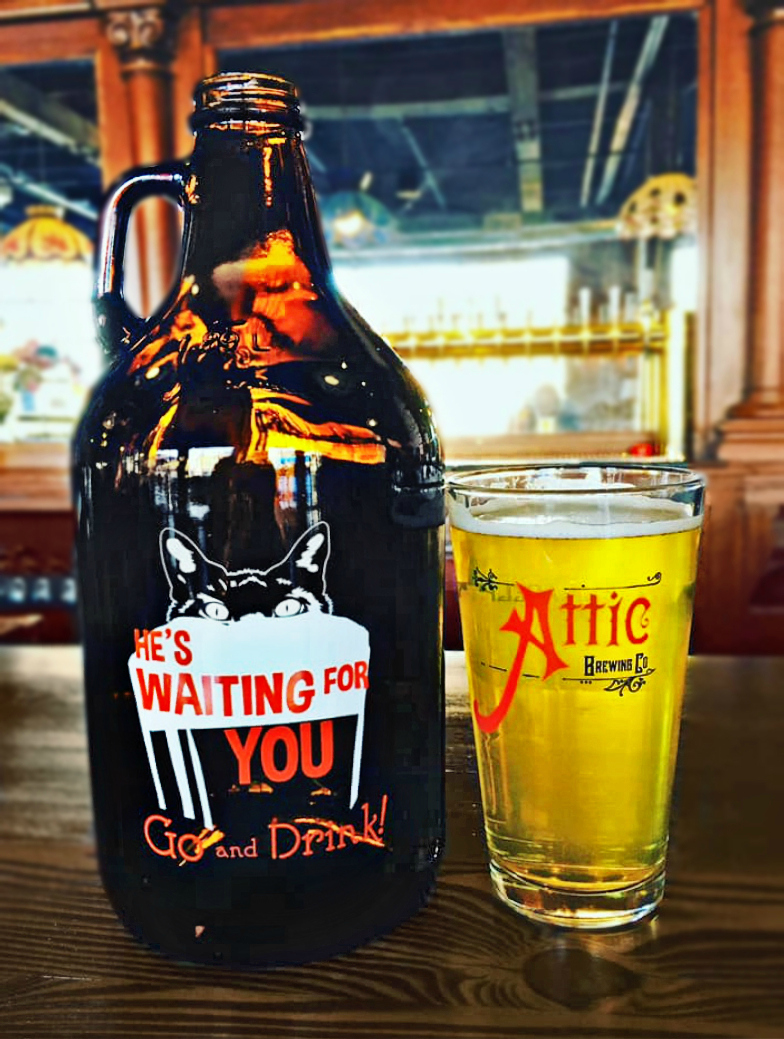 Get your growlers, people. After a long, dry century, Germantown’s back in the brewing biz and wow it’s been worth the wait. This January, Attic Brewing Company opened its doors in Wayne Junction, welcoming crowds of local beer lovers – us included. We’ve been following Attic since they announced their revenue share program in 2018 to fund their startup with investors from the neighborhood.

Owners Todd & Laura Lacy spent the next two years rehabbing a 6,000 sq ft abandoned warehouse, and fitting it out as a 10-barrel brewhouse with four 10-barrel fermenters – which sounds kinda massive but is actually quite modest for a craft beer operation, about 2,000 barrels per year (technically it qualifies as a “nanobrewery” – which is about 13,000 barrels/year less than a microbrewery).

Whatever it is, Attic makes delicious beers! The Lacys have been at it since 2010, when they lived on historic Duval Street in Germantown and began homebrewing in their attic apartment (thus the name). Like many of us who’ve dabbled in brewing, they started with a kit. But then after they drank all the beer, instead of passing their equipment on to a friend or brother-in-law, they brewed another batch. And then another…

They grew fascinated with the art of homebrewing, and (perhaps more importantly) discovered a real knack for concocting innovative beers that were true to type, but often with a fun little twist or surprise. An unexpected ingredient or a nod to the past. Today they employ a brewer, Bogdan Lisachenko, who expertly translates their homebrew recipes for popular consumption.

As you might expect from an operation that started in close quarters, they’re way into recycling and repurposing – anything that reduces waste and promotes a cleaner environment.  Sustainability became a key tenet in their business model, reflected in their brewery today. You won’t catch them serving from plastic ware, for example, or investing in non-recyclable packaging. Attic’s spent grains are donated to local farms, bakeries and gardens. All their tasting room furniture (and much of the décor) was thrifted. 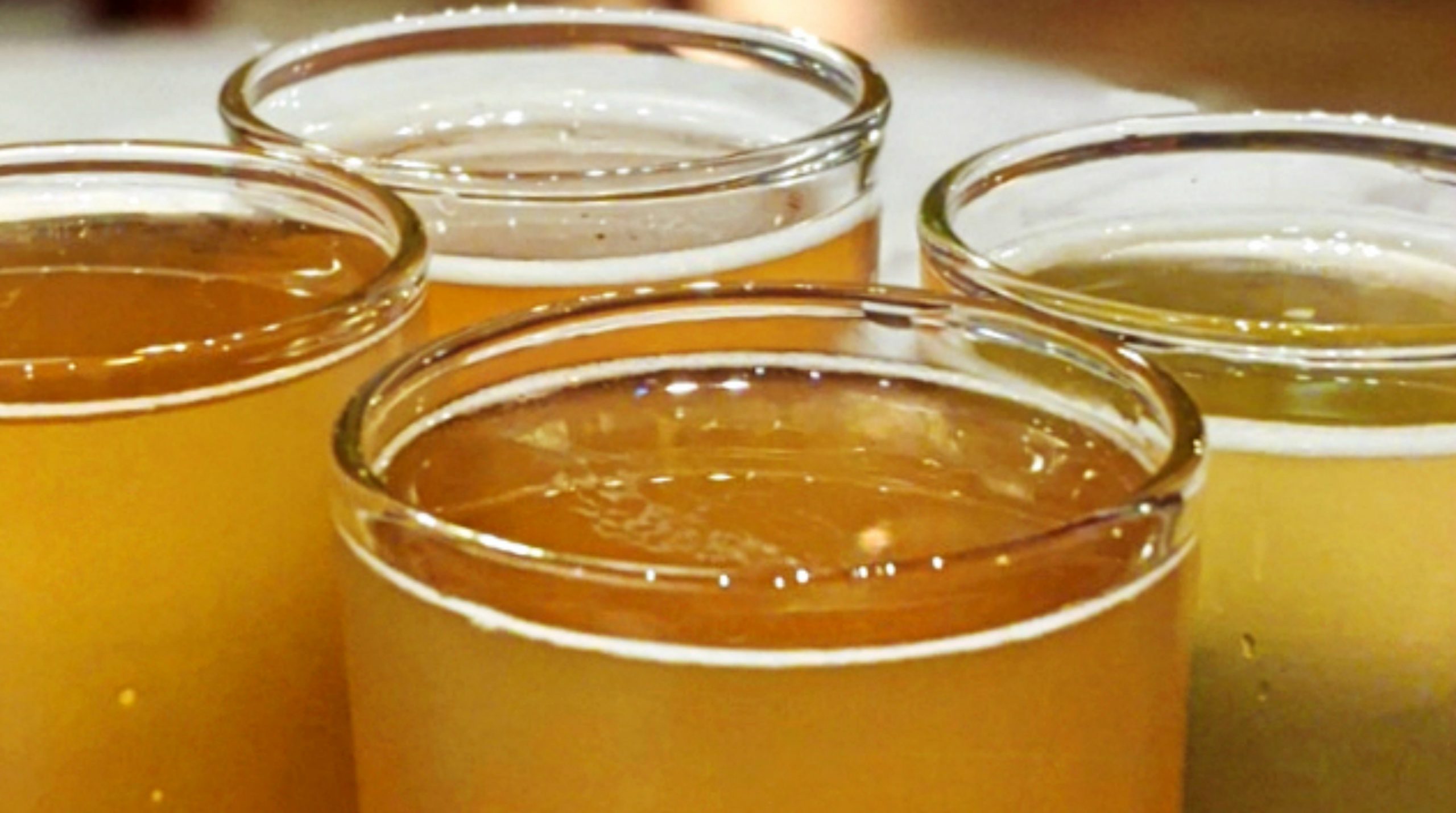 Did somebody say tasting?!

For the sake of research (ahem), we went up and down the menu. Every Attic beer has been well-balanced and flavorful. Personally a big fan of their crisp Illiado cream ale (a historic style). Another delicious choice at the other end of the spectrum: their toasty Love Bird oatmeal stout, which was offered on nitro the night we went so it was extra velvety. The guest brews have been great complements, too – especially the two ciders we tried from Kurant Brew & Brew.

If Attic has a signature brew, though, it’d probably be their Bloodhound Brown Ale – a classic session brown ale which Laura thought to spice up with Deer Creek rye malt from Pennsylvania. Fun Fact: the name comes from the Continental Army’s war cry at the Battle of Germantown, “Have at the Bloodhounds! Avenge Wayne’s affair!” (they were fired up about the Paoli Massacre).

Hats off to the styling in the tasting room! The vintage/artsy look is not easy to pull off, it can easily feel stuffy and cluttered but Attic nailed it with adorable stacked-suitcase end tables, scattered lamps, cushy sitting areas – and that bar! With the tiger! Love how photogenic the space is, and how welcoming. You can feel the love and care that’s gone into creating this vibe.

You can really feel Germantown here, too. Not just in the old building’s heft and history, but in the community-centered spirit of a crowd-funded venture like this. In the carefully restored furniture, the beautiful canvases by neighborhood artists. And in the faces you see – all colors, ages, genders – hanging out, eating BBQ, playing board games… Just having a good time. Together. With really awesome beer.

“We had over 1,000 people come through the taproom for our Grand Opening day! It was really wild and so great,” she told us, “We could never have imagined how cool this would feel and are so proud to have built such a special place in such an amazing neighborhood!”

See you at Attic. 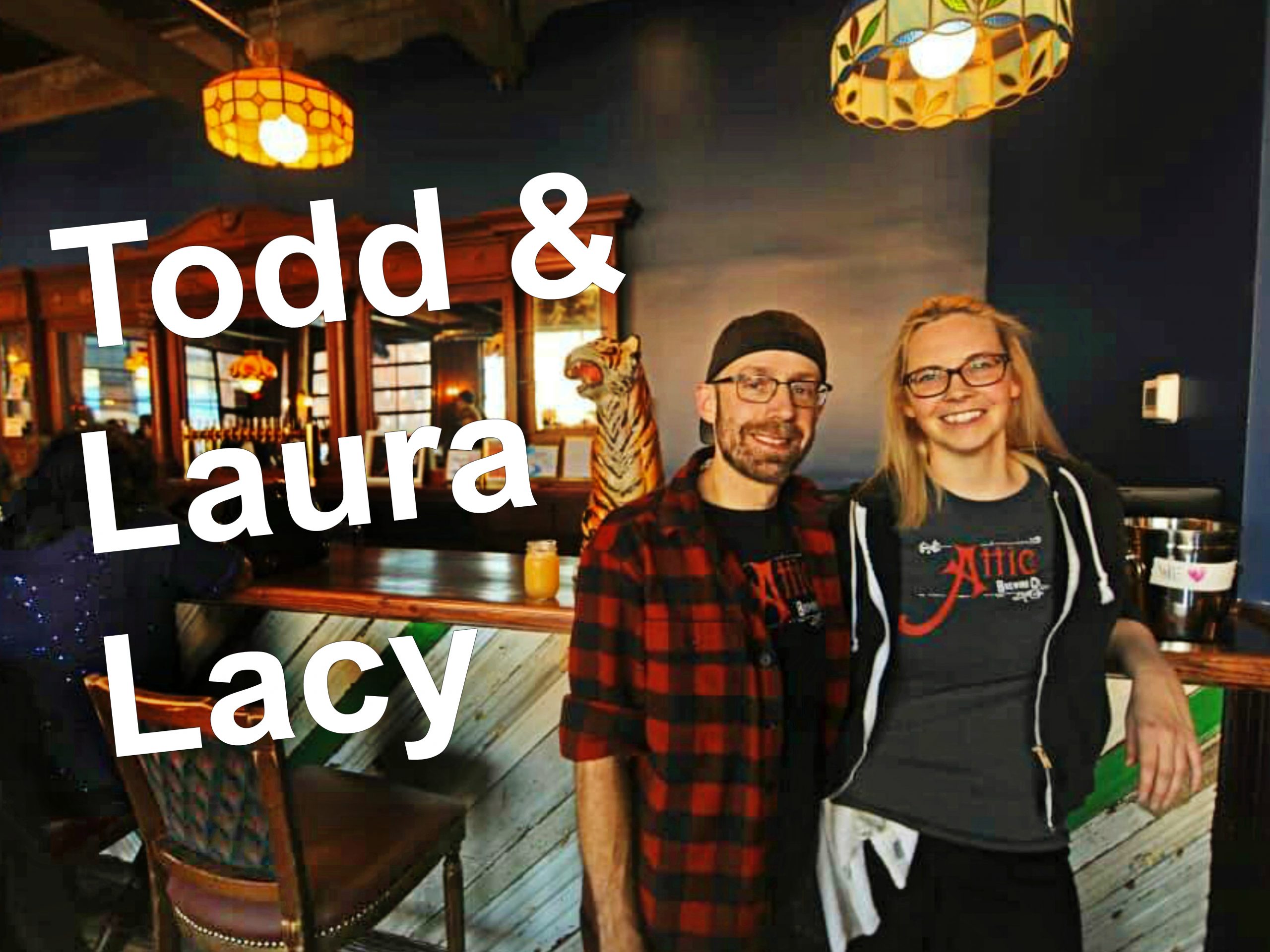 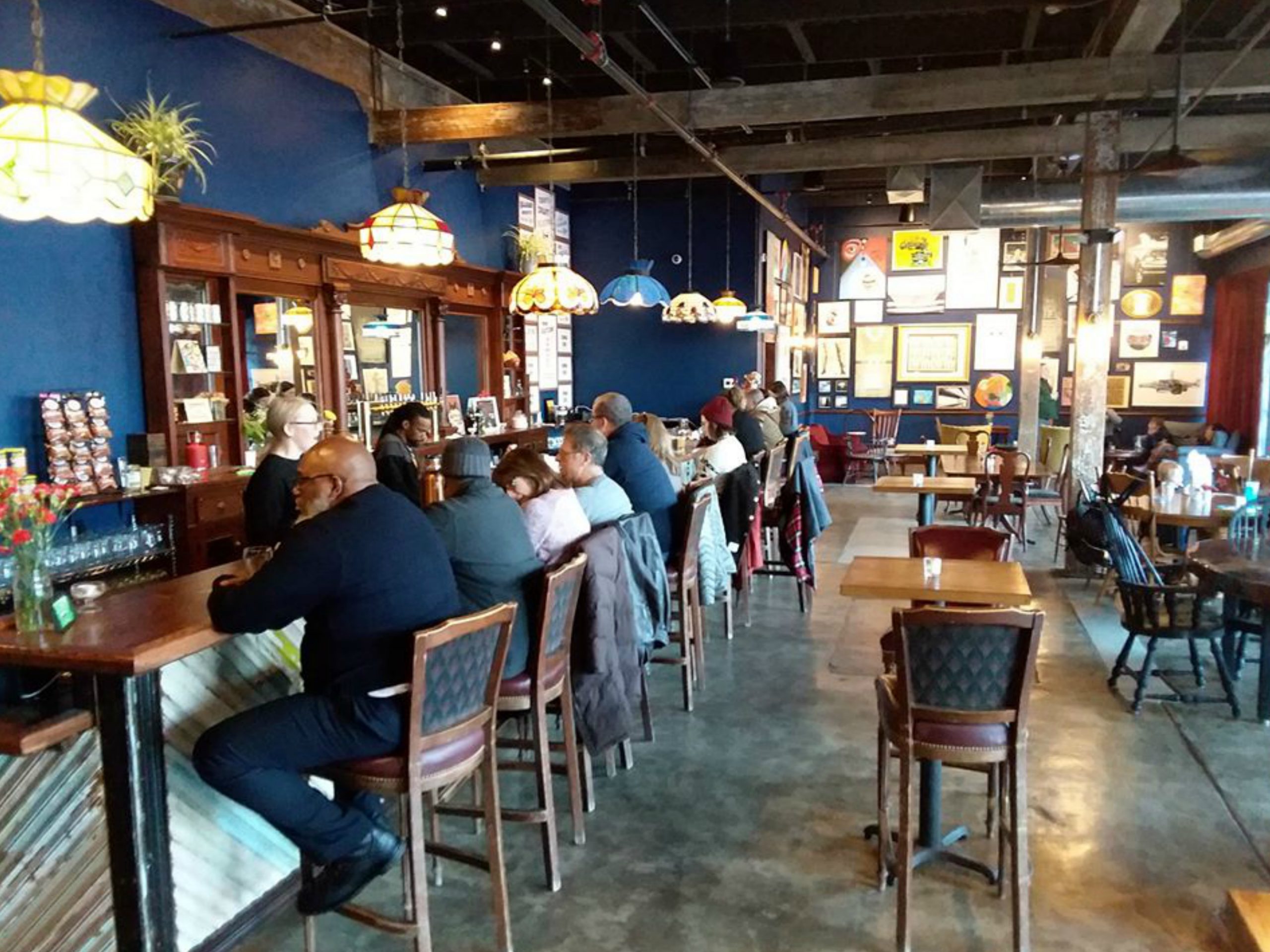 Charles G  It feels really good to be in a Craft Brewery that has a non trivial number of people of color. Like, I wish that that wasn’t a thing, but it is. This place is special.

Catherine S  I am blown away by all the hard work they’ve done.

Leonard P Was there last night. Great time and the music was wonderful. What a culture shock. Was not expecting that. Great job. Will be back. I’m on Logan St. (very close)

Matthew S  Bloodhound Brown Ale is one of the best beers I’ve ever had. Toasty and delicious.

Mitch C  These are good people worthy of our support. Germantown needs more places to hang out.

Christopher S  Awesome place, a must visit for beer fans.

Dan S  Love the brew lineup! Even in Arizona we’d be excited to see this place!

Michael S  The beer is amazing! Every style hits its mark. The atmosphere is so relaxed and homey. A fantastic addition to the neighborhood.

Julian B  Craft brewing at its best. The tasting room combines early 20th century pub décor with an industrial feel.

Lisa H  Attic beers are great and they have a nice variety. Very knowledgeable, friendly people.

Michael S  Stopped in to sample the beer and it was so good I ended up staying for many rounds. Staff here is very nice. 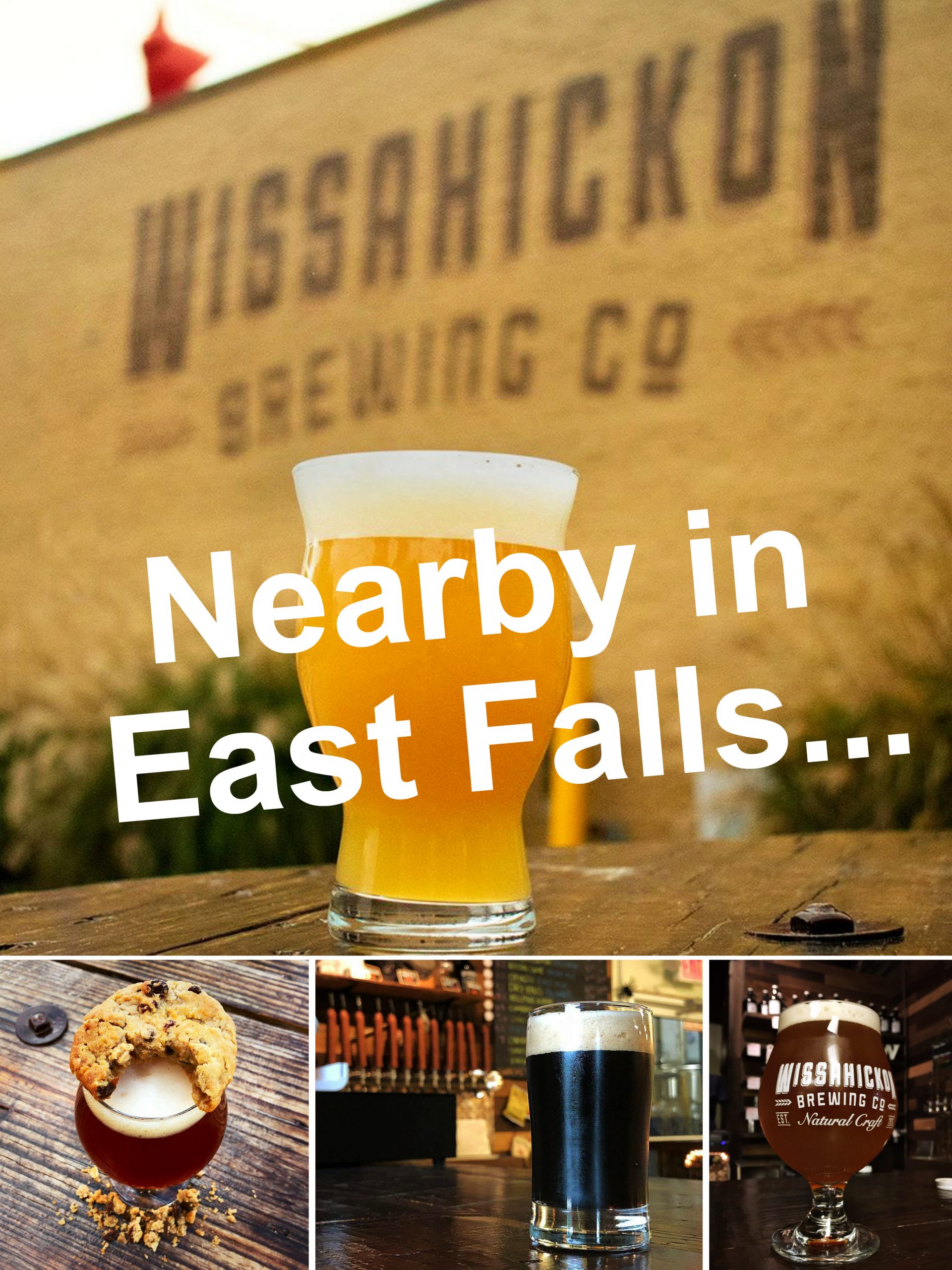 PRO TIP – Double Your Fun!
One of our favorite things about Attic Brewery is that it’s less than 3 miles away from another great beer spot, Wissahickon Brewing Company in East Falls. While Attic beers play well with others, WBC’s have a bit of an attitude: juicy Belgians, fetching Blondes and feisty Pale Ales with bite and zest. Together, these two breweries provide an exciting variety of types and flavors within a 5 minute drive (15 mins by bike, you can follow our tandem this spring!)

How Does Your Garden Grow?

What does your garden say about you? Identifying (and celebrating) neighborhood gardeners with skill & style.  Introducing: the East Falls Beautification Awards by Scott Frith of Keller Williams. [more…]

Compiled by Dr. Karl Von Lichtenhollen, revamped in 2019 for your pleasure! Chinches, You offered me a kiss and I was too weak to deny you. Now you poison my blood with an incurable pain that breaks my heart. I can’t believe they found you here, thought for sure I was safe from your artful sting.  – Hotlips Hooligan [more…]