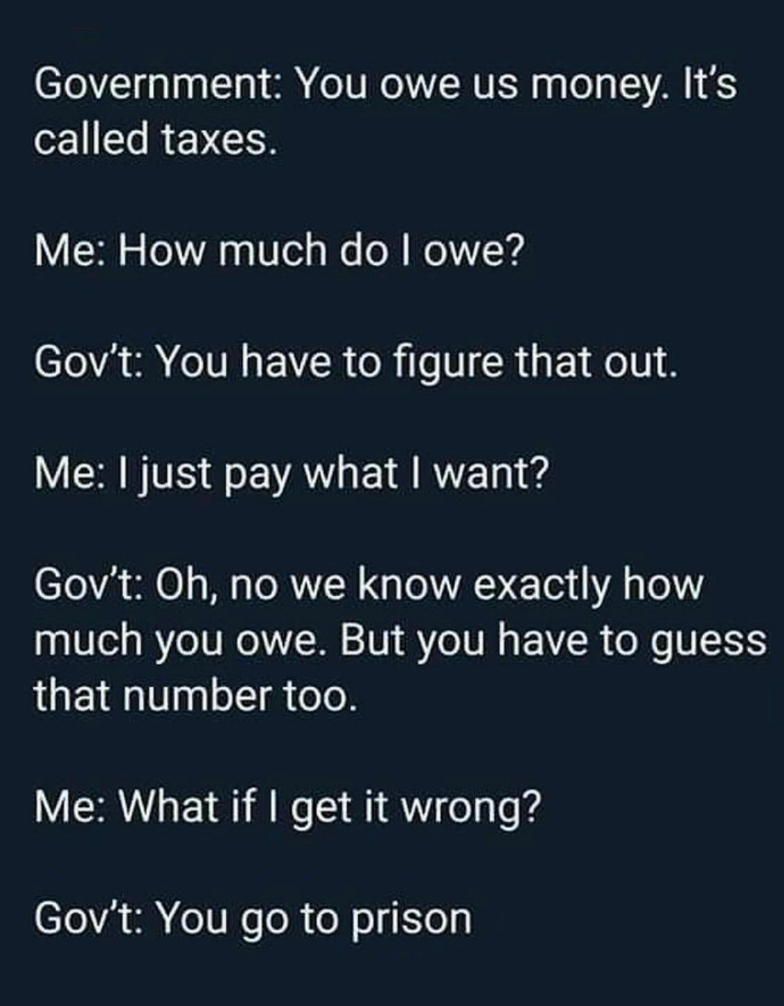 Taxes. We pay them whenever we buy something, and whenever we earn anything. “Here you go, Government, thanks for letting me fund you.” They even tax their own money that they give you! Whether you’re working full-time or cashing disability checks, the IRS still wants their cut.

You know what? I wouldn’t have a problem with this if I felt some say in where my money went. If I could see some immediate benefits in our communities – which I don’t doubt there are. As a behavioral healthcare professional, I can name off the top of my head many government-funded programs and of course there’s public infrastructure, education, Fire and Police departments… As a society, we have needs and I understand that.

But why aren’t these needs better defined? No use telling me Pennsylvania’s budget for public education is $6.7 billion dollars – I have no practical experience with numbers that high. I read somewhere that if you spent $5,000 a day since Columbus sailed to the Americas, you’d still need twenty more years to burn a billion dollars. Feels like my taxes are a Tic-tac going into a whale’s mouth!

And politicians love that they can hide special interests behind these giant, incomprehensible calculations. For the full mind-freak, consider military spending. Over the last 18 years, the US has spent $4.9 trillion dollars on wars. Tack on another trillion if you count future care for veterans (yes, trillian, with a t!). The Trump administration’s Pentagon and National security budgets keep soaring, year after year. And we wonder why other global economies are edging us out.

Question #2: In that same period, how many years has the US been at arms?
Answer: All of them.

LET THIS SINK IN: Out of the 243 years the United States has existed as a country, we’ve only had 16 years of peace.

Face it, our government is a war machine, hell-bent on forcing other nations to adopt our “values” aka let our corporations take all the resources so we can squander them on our “freedom” to keep bullying the planet. I love how we’re always butting into the Middle East because of our oil interests – like this oil in all these other countries belongs to the American people. Bullshit.

What they mean is American companies aren’t happy with the contracts they negotiated with the brown people. They don’t want to pay what they owe, what they agreed to. Like rich white folks have been doing for centuries. So they drum up racial outrage and pretend we’re all in danger when really it’s just their own pocketbook they’re protecting. To our peril! 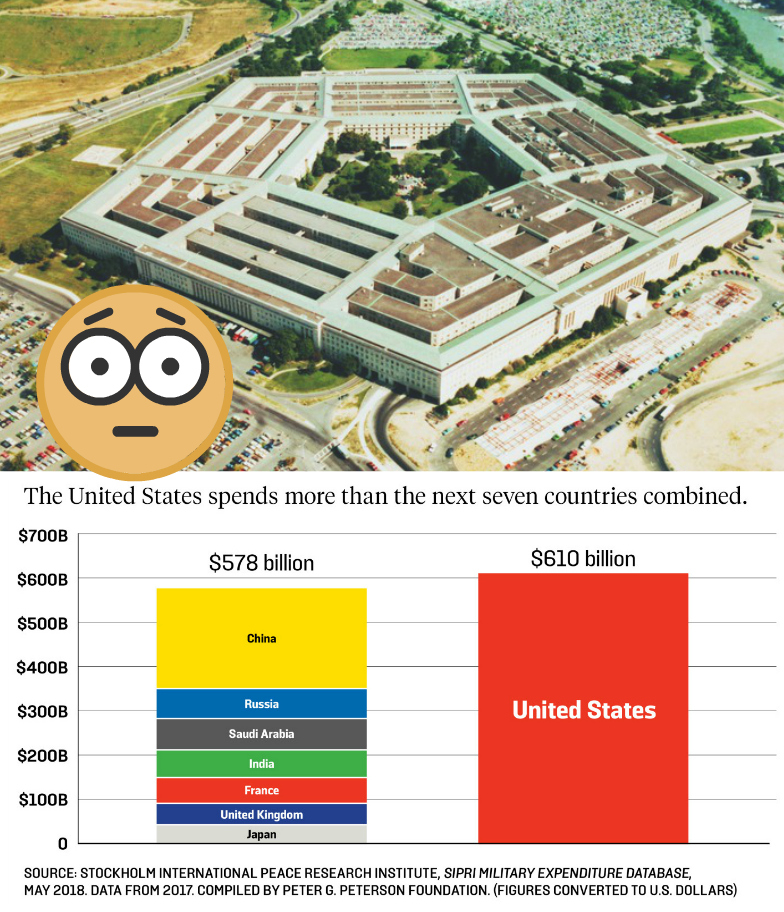 The Pentagon’s budget is three times more than the number two global military power, which is China.  Are we three times safer here? Three times smarter? Lol! Twenty-five years ago, China’s economy was smaller than Italy’s – now it’s second only to ours (and gaining on us!). Imagine if we’d put a couple trillion into highspeed rails, roads and bridges, into schools, technology, affordable housing and universal healthcare instead of wasting it away on global intimidation.

We pay all these damn taxes and still we have to fight for student loans that’ll let us borrow our own tax money back – with interest! How does that make sense? The government loves to label programs like Medicare and Social Security “entitlements” – don’t fall for that! They’re “earned benefits.” We worked for this money, it’s ours.

Damn straight Uncle Sam’s been counting every penny we make, and every cent we owe in taxes. If we’re short, they hit us with penalties and late fees. But corporations? You can drive an Amazon delivery truck thru the loopholes they’re allowed to cheat the American people.

Pay up, deadbeats! The biggest corporate welfare industries are fossil fuels, pharmaceuticals, agricultural conglomerates, tech giants and – here we go again — defense contractors. Job makers? Right. Except most of these companies would rather buy politicians than provide workers a living wage.

And thanks to their friends in Washington, the system is rigged so they can score the big contracts without sharing the wealth. Or even providing what they promised. In 2006, the aerospace firm TransDigm was caught price-gouging the government and ordered to pay back $5 million in overcharges. They said no and were “punished” with more Defense Department contracts worth $471 million.

Surprise! They cheated us again. Last year, Congress demanded an audit that showed they were inflating prices by 4,500% — to the tune of $16.1 million in taxpayer dollars. This payback only concerns a fraction of their 4,942 projects, too. If all of them had been audited? Shoot.

TRUE STORY: 54 cents out of every dollar in Federal funding is spent on the Department of Defense, yet it’s the only department that doesn’t hold regular audits. Congress has tried, but DoD’s records are apparently such a mess it’s impossible to see what’s going on. From 1998 – 2015, at least $21 trillion in defense transactions could not be traced.

Are you kidding me? Since when does bad accounting get you out of an audit? This does not fly with the IRS and it’s tragically unfair for every working American. No taxation without representation, my ass.

I wish I had more encouraging words for you, readers, but this tax season my hope is that all of us wake up to the corruption, profiteering and gaslighting rampant in our government. We need leaders who can show us where our money is going, and will listen to our demands for programs that truly protect and uplift us all.

Shot-gunned into your conscious via both eyeballs, in a spirituous froth of truth, hear-say and leg-pulling. [more…]

Can you ID these famous manes?  [more…]

Stevens’ campaign heats up as he prepares to challenge Pam DeLissio in April’s primary for state representative of the 194th District. [more…]