Tails are wagging! The new InnovAge/NewCourtland senior living & services complex on Henry Avenue has generously included a community dog park in their redevelopment plans. Neighborhood representatives have been meeting in 2019 and this January, NewCourtland’s Director of Government Affairs swung by East Falls Forward to review plans before the project begins this spring.

(Bob Theil’s comments have been slightly edited for clarity) 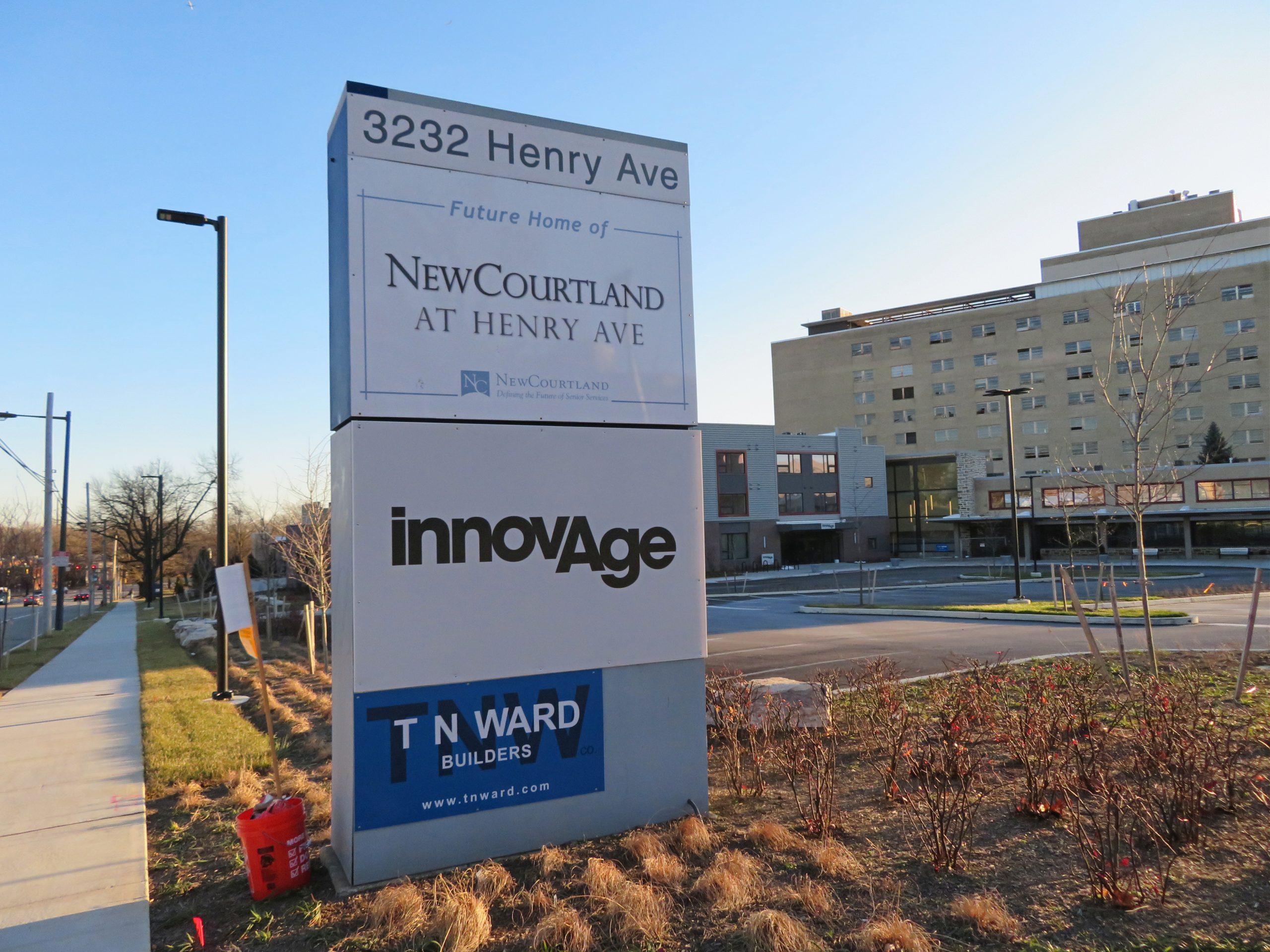 We own the property at 3232 Henry Avenue  — just a couple of updates besides the dog park. The Life Center (that is the healthcare center for seniors) is up and running. So far it’s very successful. It used to be us operating but we have a tenant now, the InnovAge Life Program. Going very well.

Our first phase of housing, the terrace phase, was 49 units and they went as fast as we possibly could fill them. The Wait List after that first round is like 250 people. There’s such a need for it. The second phase is 36 units, we’re hoping to get our CEO to open by the end of February. So that’ll be up and running soon. Again, we have about 250 people on the Wait List already, we’ll put 36 people in there, so it gives you a good idea how fast this stuff moves.

The last part I just want to touch on, the commercial spot. Most likely (we’re like 99% sure) it’ll be a Davita dialysis center, we’re working with them still to knock out all the last issues. They haven’t started construction yet but we’re hoping to have that done by the end of summer and have them up and running. It’s a need everywhere in the city unfortunately especially with the seniors we have here as well. That’ll be open to the public, it’s not just for NewCourtland or InnovAge clients. Anyone can come in. 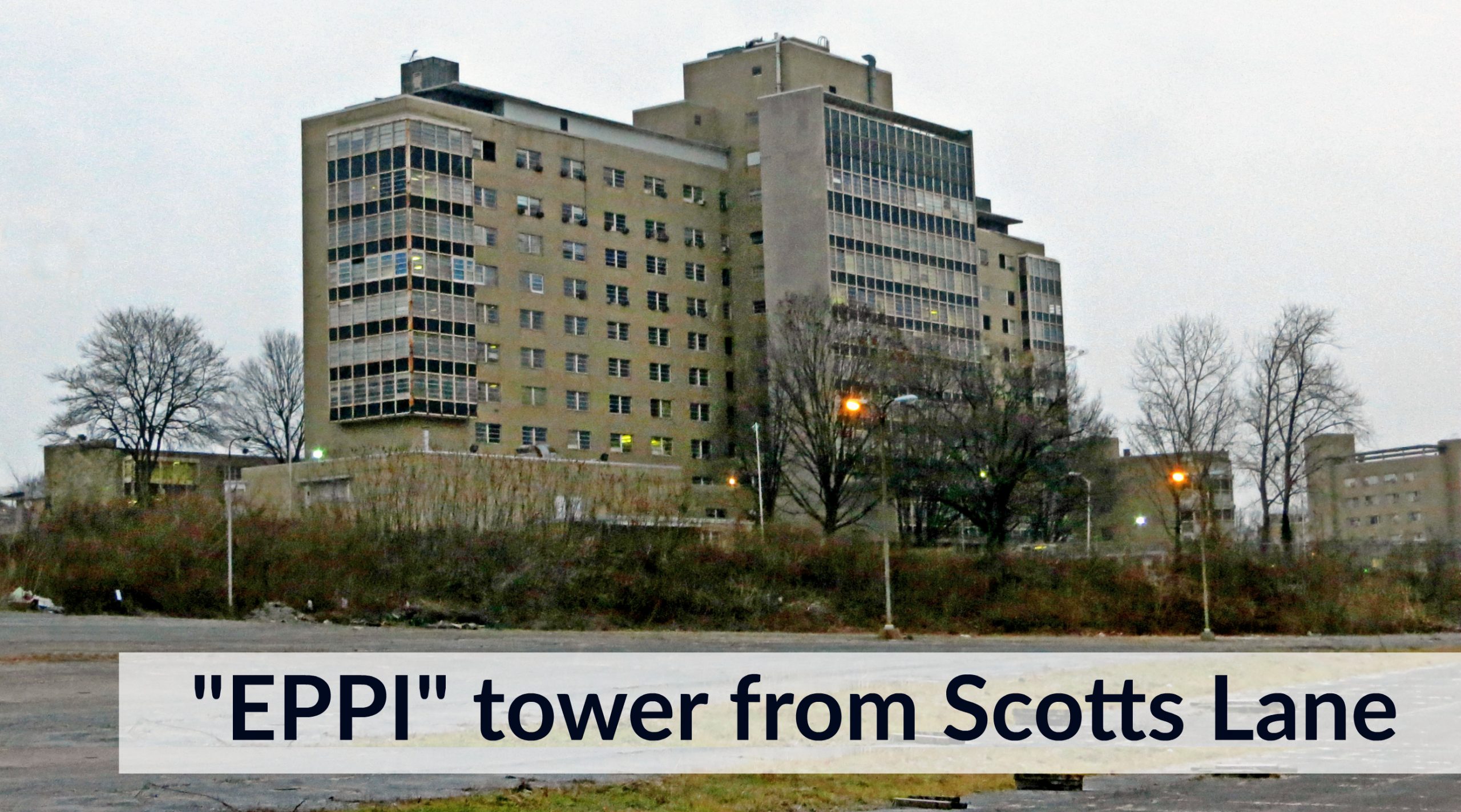 “The tower, we don’t know what we’re gonna do with that yet. It’s 11 stories. The way it’s laid out is very odd. The columns are I think 19 ½ feet centered, I think it’s hard to make that work… Our first shot at that, we didn’t get the tax credits so we have to revamp our process. If anybody has any ideas about what they think can go there, we are absolutely looking at every angle we possibly can. Email me, and I will appreciate that.

Now, the dog park. We met just after Thanksgiving – we tried to keep it small, we had representatives from East Falls Forward, RAH, EFCC, Abbotsord Homes and we had residents who actually live on the premises who wanted to be a part of this, too. Just to kind of go over the latest plans which Steve here put online.

We’re hoping to get this started in the spring sometime. We’re just waiting to see if we have to get approval from Streets to do sidewalk work and all this other stuff. Philly Streets Dept is very finicky anymore, they’re trying to get private developers like us to do as much work as possible so they don’t have to do it, like, curb cuts and stuff like that. They kinda hand it off to us, so we’re waiting to see what we have to do. We’re hoping it’ll happen sometime in the spring.

It’s not a huge project but it’s enough so we have to move some dirt, put up fence, put up lighting, security stuff like that. As we get closer, we’ll actually have a committee with representatives from each of the civics affected. If you’re interested, email me or Steve. Any questions? 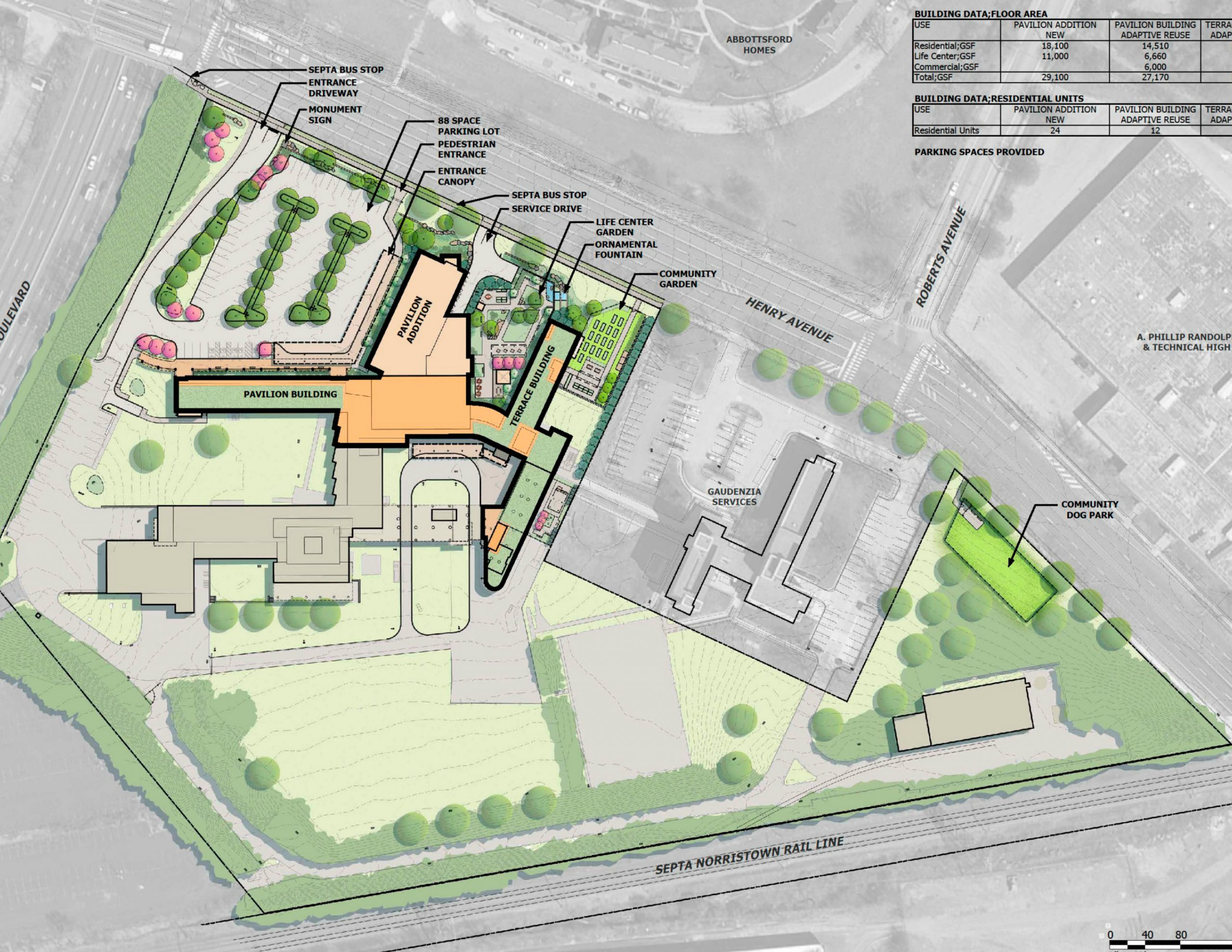 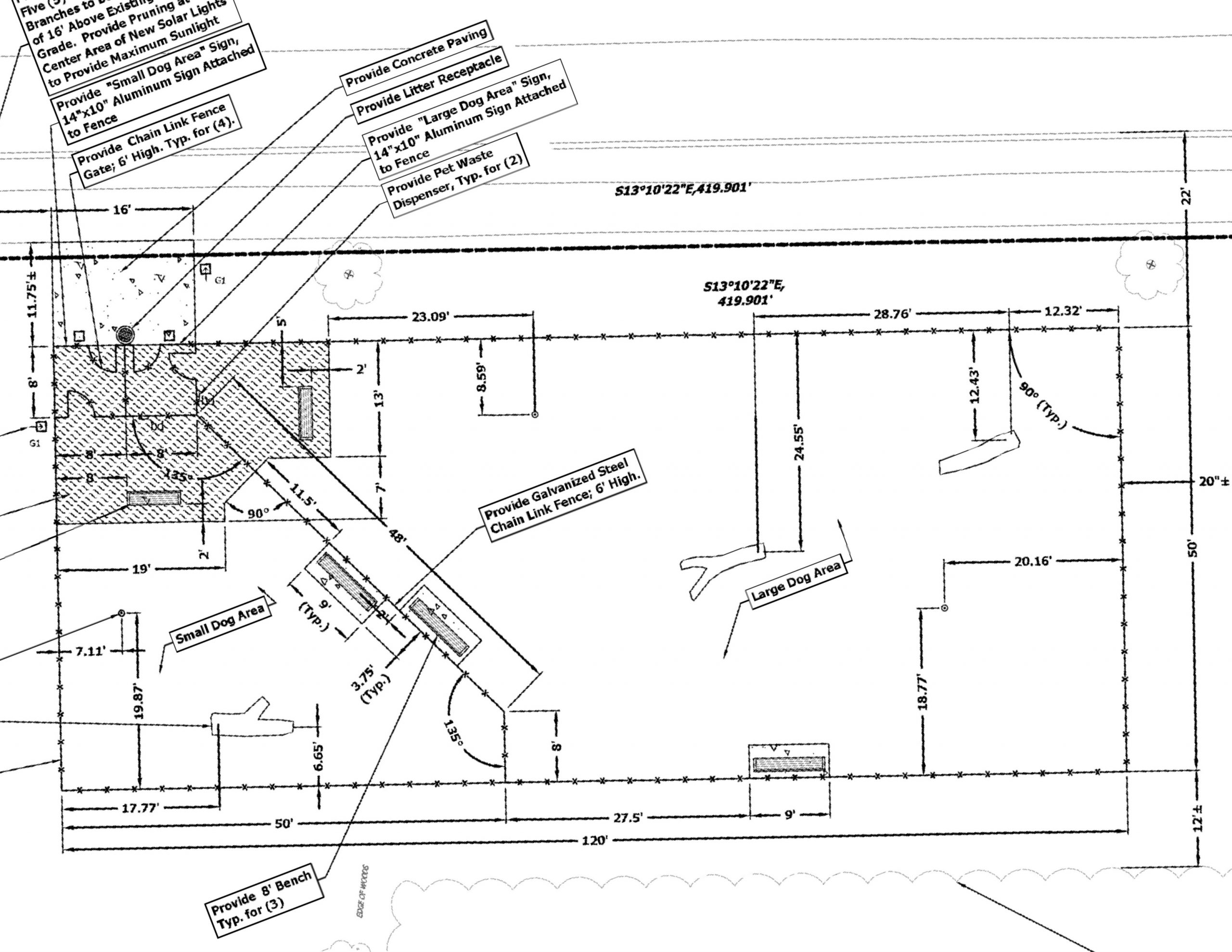 Q: Will dogs be separated by size?

Bob Theil: Yes there will be two parts – a small dog area for little dogs and then a larger area next to that. When you come in there’ll be an entry way to unleash the dogs. And I think to the right there’s the small dog part and it’s straight on thru for the bigger dogs.

And there will be fake logs and stuff like that in there. And a dirt/mulch kind of substrate. We looked at the anti-microbial stuff but it inflated the project cost by hundreds of thousands of dollars. We tried to go with the most cost effective and easiest to maintain.

Q: Where exactly is the dog park going to be?

BT: On Henry Avenue. Our property is a U-shape that goes around Gaudenzia. The Senior Life Center is on one side of the U, and the dog park is the other. It’s near at Roberts Avenue, across from Randolph school, not far from the Baker’s Center complex at Fox Street.

We heard a lot of questions about parking – there’s always ample parking on Henry Avenue so I don’t think that’ll be an issue. If we find it is, we’ll probably just use that parking lot. We picture most people using the dog park off hours anyway, meaning before work or after work. We think that parking lot will be available then (about 60 cars can fit in that lot).

Q: Are there hours?

BT: We’re thinking dusk to dawn, depending on the season. But we’ll modify that as we go. In the summer obviously people will be out there later but like today, in 36 degree weather I don’t think many people want to stand outside in the dark with their dog. So right now we imagine dusk to dawn but if there’s a greater need we’ll re-evaluate as we go.

Q: Is there any water?

BT: Yes we’ll have a spigot there and bowls for those things. See, I’m a dog guy so I know! There’ll be trashcans and bags and all. NewCourtland will take care of maintenance but, again, we’d like to get the community involved as well. Take some ownership of this too. East Falls community was the first one to call for it, so we’re gonna ask you guys to help us out.

The committee will be made up of different communities but we’ll be there as well. We’re a pretty open organization, as Steve knows and anyone who deals with us knows, we try to be as open and transparent as possible. So if you guys have a monthly meeting or email list or whatever you want to do, we’ll be a part of that as well. We’ll be available to listen to suggestions, complaints or whatever.

Get involved! Email info@eastfallsforward.org to get on the list for dog park updates, including committee meetings and volunteer opportunities. Questions? Comments? Email Rob at trheil@newcourtland.org about the dog park or NewCourtland in general.

East Falls Forward is a Registered Community Organization with the City of Philadelphia and the only democratic zoning body in East Falls. Membership is free, sign up at EastFallsForward.org or a general membership meeting, every 3rd Thursday at 3721 Midvale Avenue 6:30 – 8:30 (first hour is social!). Follow EFF on Facebook for the latest updates.

Centuries of local history to explore — right in our own backyard! [more…]

On the Road to Healthy Pets