EFDC, EFCC, EFF… OMG! What’s up with all the local governing bodies here? Who’s who in leadership — and how do different groups of neighbors influence our community? We’ve spent the last two years on this highly-personal summary of East Falls politics.

As East Falls heads into 2017, we’d like to pounce on this opportunity to summarize our hyper-local political landscape. We offer these observations after studying & writing about East Falls history for about a year on EastFallsHouse.com, plus covering two years’ worth of meetings, characters, and events right here on this growing blog.

Here’s our run-down of movers & shakers for business, development, traffic/parking, and quality of life in the Falls.

We tried to start with the basics — please follow links for deeper analysis. Please keep in mind, we’re writing here not as journalists, but neighbors. Our views are naturally colored by living here and interacting with all these people.

But ya know what? These officers listed below have major history with each other, too, going back at least a decade — except for the president of the newest group, herself a neighbor only a few years. We all have one thing in common: this is our home. Objectivity’s impossible but that doesn’t mean we can’t share our experiences.

The better we can explain and explore our wants, needs & motivations, the more effectively we’ll be able to achieve common goals.

Opposing info and viewpoints? Lay ’em on us, let’s figure stuff out.  Cheers for community & transparency in the Internet Age, and for positive change and growth in East Falls.

WHO’S WHO IN LOCAL POLITICS:

The widest-reaching organization in these parts is the 38th Ward, which covers large parts of Allegheny West and most of East Falls (map). Ward Leader Mark Green lives right up from Laurel Hill in an awesome house he tricked out himself (he’s super handy). He’s got a good deal of influence in local matters since he works with Councilmen Curtis Jones (running for re-election in 2019) and Bill Greenlee (who is stepping down this year).

Mark’s agreeable and engaging at neighborhood events and meetings where our paths have crossed. He’s shown amazing patience with our questions, and knows all kinds of interesting history about the area. From what we can tell, Mark’s not always in step with East Falls leadership, but regardless he’s a fixture in the Falls where many residents are ward members.

Update Winter 2020: Meredith Johnson has resigned and the board is now currently seeking a replacement.

(UPDATE Fall 2018: Kathleen Hogan submitted her resignation. The board currently seeks a replacement).

(UPDATE Spring 2018: Kathleen Hogan threw her support behind a new Welcome Guide for our neighborhood in partnership with Chestnut Hill Local, who then began printing a newspaper with East Falls Community Council rather than work with us here in the community, sigh).

Next, seems to us East Falls Development Corporation has got some pretty big sway, thanks to grant money and influential partnerships it was created to seek out by the EF Business Association. EFDC also provides community info for potential residents & businesses, and works with various city agencies to promote surveys and development projects. Fun Fact: They do not hold public meetings but some committee meetings are open (good luck finding out when they are, though).

A non-profit agency, EFDC’s first and only empolyee is Gina Snyder who oversees the area’s biggest event: the Dance on the Falls Bridge (which has been cancelled until further notice). She also got the Bike Race Block Party started (also no longer a thing). 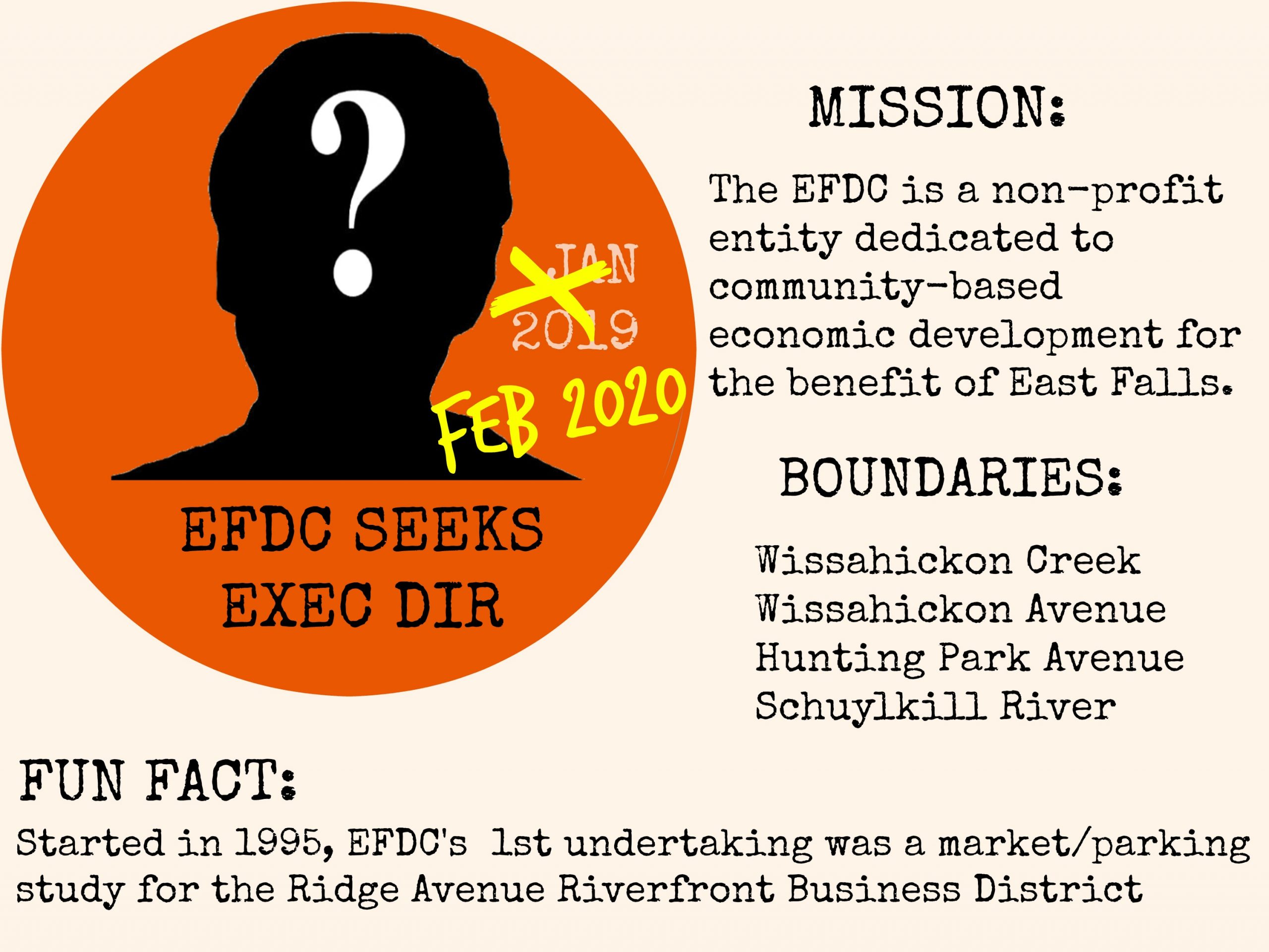 Regardless of this wide-ranging scope of input, much local development is still often at odds with Community Council’s gauntlet of requirements for renting property or setting up shop here.

EFCC’s preference for specific, binding, and enforceable contracts tends to turn off new business and investors who prefer a little “wiggle room” in their business models. At zoning meetings, Gina warns that such agreements can seriously hamstring a business’ chance for success.

Another bristly issue for EFDC is an on-going “border war” between East Falls and Ridge-Allegheny West. For the last decade or so, members from both EFCC & RAH have been wrestling with which organization has say over businesses and development on & around Scotts Lane, especially as it butts up to Ridge Avenue. (Map 1 and Map 2 show how the perceived border has changed).

For some reason we have not yet been able to nail down, Gina has been a lightning rod in these skirmishes. As far as we can tell, both EFCC and RAH tend to blame each other’s transgressions on EFDC.  Maybe they enjoy having a common enemy?

Bummer, cause Gina seems to us a perfectly nice lady, and a highly-motivated neighborhood representative. We’ve dragged all kinds of people into her office, and she’s always been polite and patient, glad to share what she knows about everything from our schools to our parks to our political infrastructure.

Ah, EFCC. The very first meeting we attended, the president yelled at a first-time attendee because she stood up to speak before he announced her name, “I didn’t call you yet, sit down!”

The current president, Bill Epstein, may not be quite so dramatic a figure but from our vantage point he’s cut from the same cloth of provincial seniors who know what’s good for us, ha. Protocol for EFCC meetings feels way hierarchical: executive members sit up front, with the general assembly behind. The President’s address comes first, then executive members stand to read their reports, followed by echoes from the audience.

Voting is weird too. Executive officer nominations are handled privately by an election committee (who elects them, hmm?). Theoretically anyone can make their own bid to run for office but certainly the nominating committee’s ticket has an overwhelming advantage.

Zoning is controlled by a select few, too. Although the EFCC’s zoning committee holds public meetings, they vote privately. General members do not have a vote in new business & development.  (EFCC’s traffic committee also convenes privately.)

EFCC’s been around since the 60’s, and has changed a lot since its early days of straw polls and rotating meeting locations. What’s up with their authoritative, secretive, and confrontational model? Of all the organizations we’ve tried to work with, EFCC has been the most reactive and the least cooperative by far.

Which sucks cause they have so much to contribute, especially now we’re experiencing all this growth & change. EFL is writing the story of East Falls in 2017 — we’d love to have their input and encouragement. Too often it seems we’re blamed for just being the messenger. And clearly, they’re not getting all of our message…

Our neighboring RCO — nextdoor to the East but worlds away from EFCC as far as their meetings go. A diverse group of about 40 people gather in St. James School’s cafeteria — everyone at round, low tables. Rose Cooper the president, leads an open, inviting discussion with lots of Raise-your-hand-if’s and feedback from the audience. Members seem relaxed, comfortable, interested.

Rose has been a fantastic guide to her neighborhood, introducing us to St. James School, Mural Arts projects, and the good people of Forgotten Park off Ridge Avenue.

Historically, there’s been a lot of racial tension between RAH and East Falls — our very own local “contested area,” (map) where two community organizations weigh in on all matters of business & zoning (disagreements are settled by Councilman Curtis Jones).

But things are changing with six-figure condos coming up near Laurel Hill. Rose looks forward to inter-community conversations towards making Ridge Avenue more walkable and beautiful from every direction.

Members are encouraged (but not required) to contribute $10 per year for a block party, field trip, or “something fun” for the community. RAH meets on the 2nd Thursday of every month at 7pm at St. James School (3217 West Clearfield Street)

And then there’s East Falls Forward.  (Full disclosure: We had ring-side seats to EFF’s creation in 2015 and Steve is currently EFF’s Secretary.)

The newest RCO in town seeks to create create a modern, sustainable, and livable neighborhood in step with the exponential growth Philadelphia is undergoing as an energy hub. “We don’t want to be another Manayunk or Roxborough,” EFF president Felicity Moorman told a diverse crowd at a recent meeting, “We can create a place with our own unique stamp.” To make this as easy as possible, EFF relies on pure democratic action: one person, one vote. Meetings are largely informational affairs — information discussed is then posted online for all members to review. If a vote is required, members have 48-hours to chime in (off-line neighbors can submit paper ballots), after which the results are shared publicly.

EFF has about 350 voting members who most recently helped green-light Wissahickon Brewing Company’s tasting room. Currently, EFF does not charge dues — anyone in 19129 can vote. (coverage area map). EFF meets on the 2nd Thursday of every month at BuLogics/StratIS (3721 Midvale Avenue). Doors open at 6:30pm for a free neighborhood social, with the “meeting” part beginning around 7 – 7:30pm. Follow on Facebook for agenda, recaps and, occasionally, live feed from meetings.

There you have it: the local political landscape, fully shaded with our own personal insights & interactions. Don’t take our word for this stuff, though — we hope our recap here inspires your own investigations. Be curious, get involved, and connect with others who support your dreams for East Falls.

Here’s to grabbing your community fix with one — or all! — of the organizations here.

6/27 Theft 4500 Kelly Dr. (Schuylkill River Trail lot) 12:10PM Complainant left his sunroof open when he parked his car. When he returned, he noticed his gym bag was missing. The bag contained a laptop, [more…]

EYES OUT FOR EMMA

3/30/17 UPDATE: We are sad to report that Emma’s owners have announced the search is off. Our thoughts go out to her family in their time of loss.