The school’s new proposal could bring 200+ students to Falls Center.

So last April, Laboratory Charter School of Communication and Languages — a City-wide public charter school open to all Philadelphia children via lottery — petitioned the School Board to consolidate its 3 campuses (2 in Overbrook, 1 in Northern Liberties) into one location at 3300 Henry Avenue in East Falls. That plan included grades K – 8, with a cap of 1,000 students.

In the face of vocal neighborhood  opposition (led by EFCC’s Friends of Mifflin committee), the Board of Education unanimously voted to indefinitely postpone Laboratory Charter’s request. Chairwoman Joyce Wilkerson noted at the time neighbor concerns about traffic, bus routes and enrollment trends. She wanted to know more about how such a school might impact Mifflin.

Not sure how all that went but here we are again. This time, Laboratory Charter School is asking Philadelphia’s School Board for permission to relocate some – not all! — of their students to the Henry Avenue campus. Just three grades: 6th, 7th and 8th (about 220 students) for the 2020 – 2021 school year. A team from Lab Charter presented at East Falls Community Council’s general meeting March 9th. Dr. Andrea Coleman-Hill, CEO, explained the school’s need for better facilities, and assured the room they’d be good neighbors.

Dr. Coleman-Hill was mindful of the traffic/bus fumes/safety issues in the area already with Pierce Elementary School’s emergency move here earlier this year. She stressed that only grade 6 (and a few special education kids) ride school buses. Just “one or two” buses, total. And staff will always be there to see the children on and off, making sure everything runs smoothly and someone is there to address any neighbor concerns.

A handful of neighbors were pretty sure adding ANY bus traffic to this residential area was a bad idea. Why can’t the school use the big parking lot at Falls Center – the one accessed from Henry Avenue? Eyeballing it on googlemaps, certainly looks like a bus could drive right up to the school on the opposite side of the building, which backs up to the big parking garage at the back of Falls Center….  No?

Dr. Coleman-Hill and her team, though, requested “Henry Avenue” as their preferred bus pickup/dropoff for the school. Yikes! Neighbors tried to clarify they didn’t want the kids’ bus stop literally ON Henry Avenue which is a safety nightmare. They wanted the buses to enter THROUGH Henry Avenue, and pick up the kids by the school in Falls Center’s parking lot. Right?

“We can only make the request, “ Dr. Coleman-Hill shrugged, repeating that they certainly wanted  to hear from the neighbors but stopping short of saying they would consider using Falls Center’s campus, as opposed to Henry Ave. When asked who would be making the decision, she suggested it would be decided by School District Transportation and Durham School Services, who is contracted for Lab Charter. But she wasn’t really sure. She was also rather coy when asked what the school planned to do if their request to move bussing from Scotts Lane to Henry Ave was denied. “It’s only one grade,” she emphasized: 7th and 8th graders will have transpasses. 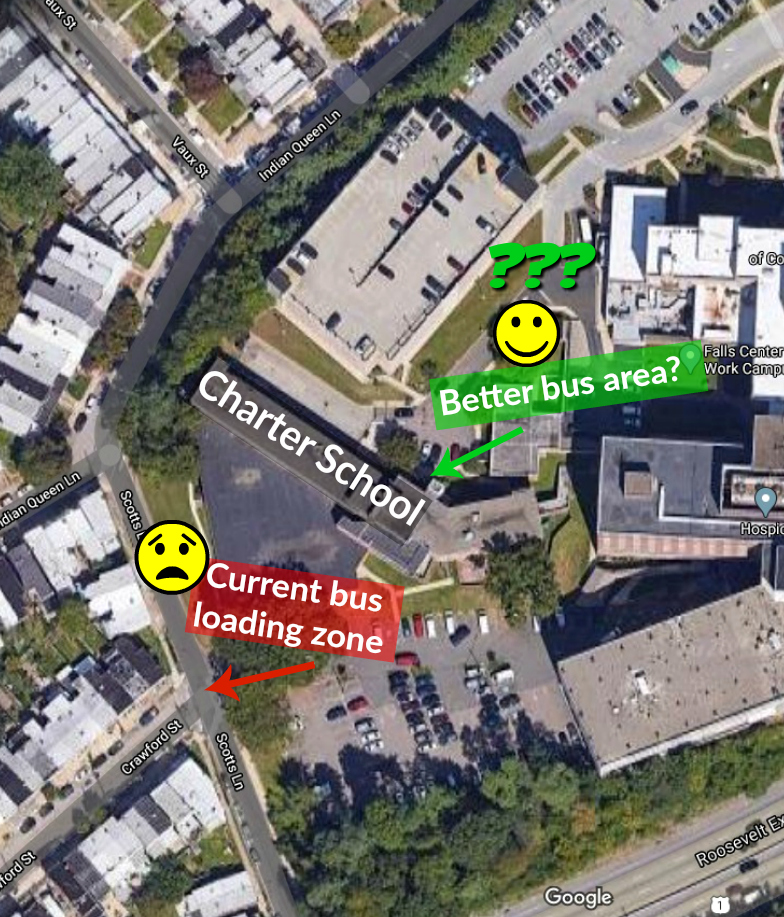 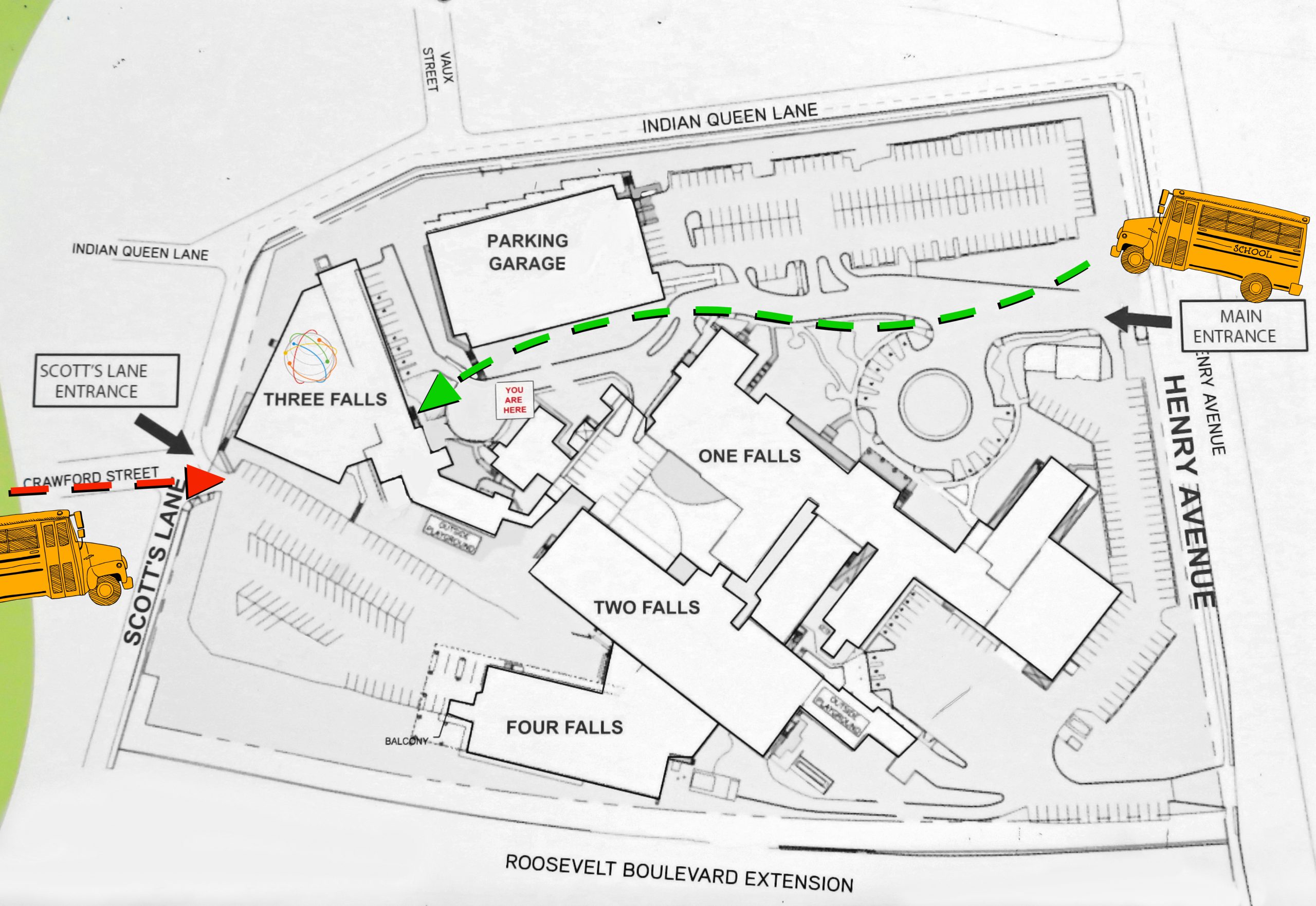 But still. The buses are just part of the issue. Students can be trouble, too.

Neighbors cited noise & vandalism from Eastern Charter School kids on their way to & from SEPTA. A woman added that she “sees them on the buses, they’re very disrespectful,” and that bus drivers “can’t control them.” A guy on Midvale said he was “tortured” by AMY Northwest students, until their headmaster gave him a direct phone number. He wanted the same assurance from Dr. Coleman-Hill, because the 6th, 7th and 8th graders he knows “are terrible.” And the trash they leave “all over the bus stop” and his adjacent property is “offensive to the community.”

Dr. Coleman-Hill and the school principal are both happy to provide their personal phone numbers to community members in case there are any concerns or issues. But they underscored that Lab Charter does not have their kids running up and down the street. They’re escorted by staff, always. Their students don’t have behavior issues – the school is one of the City’s best charters options, a two-time national Blue Ribbon School with a Middle States accreditation and a Peer Leader Award from the School District of Philadelphia.

Laboratory Charter hopes to present as soon as possible to the School Board – at meeting time, they said they were shooting for “March or April” but obviously with COVID-19 restrictions in place the School Board’s schedule will be up in the air for some time. *UPDATE* Looks like there’s a School Board vote scheduled for April 30th — and a “Say No to Laboratory Charter” petition is circulating the neighborhood.

The Falls Answers the Call

Residents rally at McMichael Park to support the BLM cause. [more…]

It runs in the family… Matriarchal trivia for May [more…]