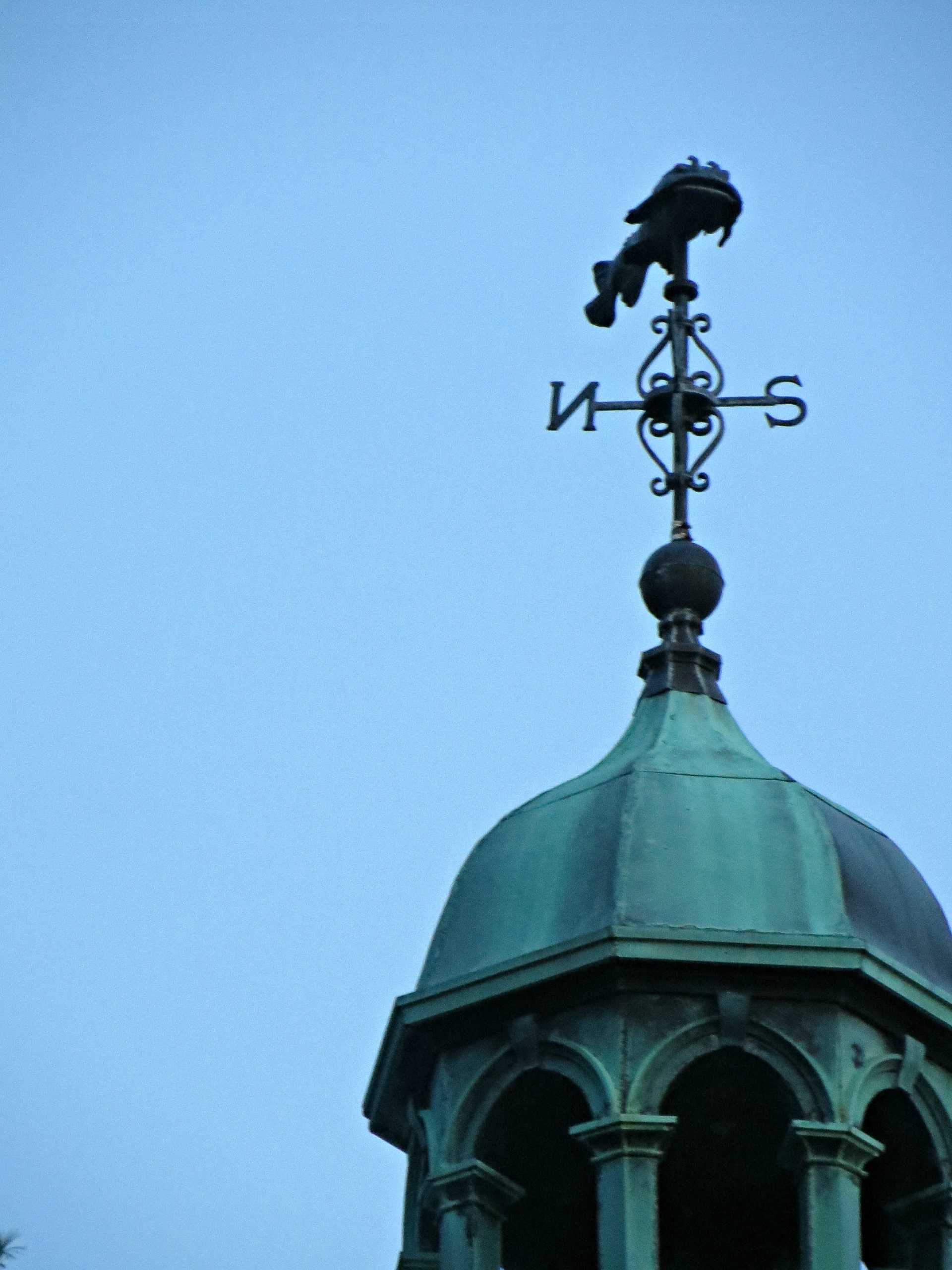 Look up — Falls of Schuykill library’s weathervane has fins instead of feathers! Up close ‘n personal with East Falls’ catfish cupola, including the question on everyone’s mind:  What’s the deal with fish around here?

A neat quirk about East Falls — we sneak art into the weirdest places: driveways, porch trim, random sidewalk repairs, landscaping…  In addition to bazillions of unique residential details, our neighborhood has lots of funky public art, too. Often fish-themed: 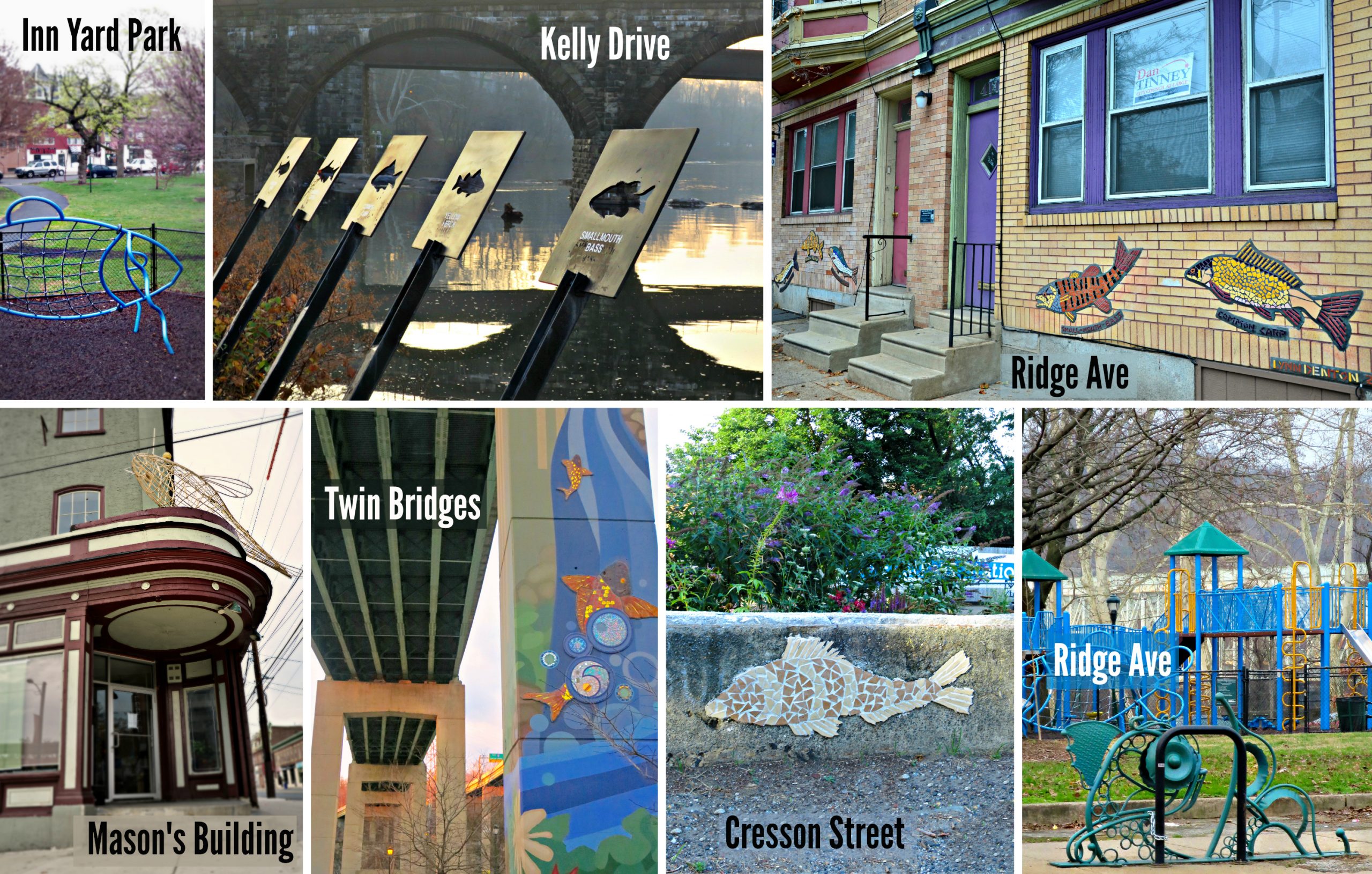 There’s a tile fish on Cresson, and also a bunch on some rowhomes near the Twin Bridges — plus that fish above the doorway of the historic Mason’s Building at Ridge & Midvale.  There’s a really cool metal fish bike rack near Inn Yard Park, and if you look reeeeally hard, you can see steel gray metal fish outlines on the old “Cleaners” building off Calumet Street: 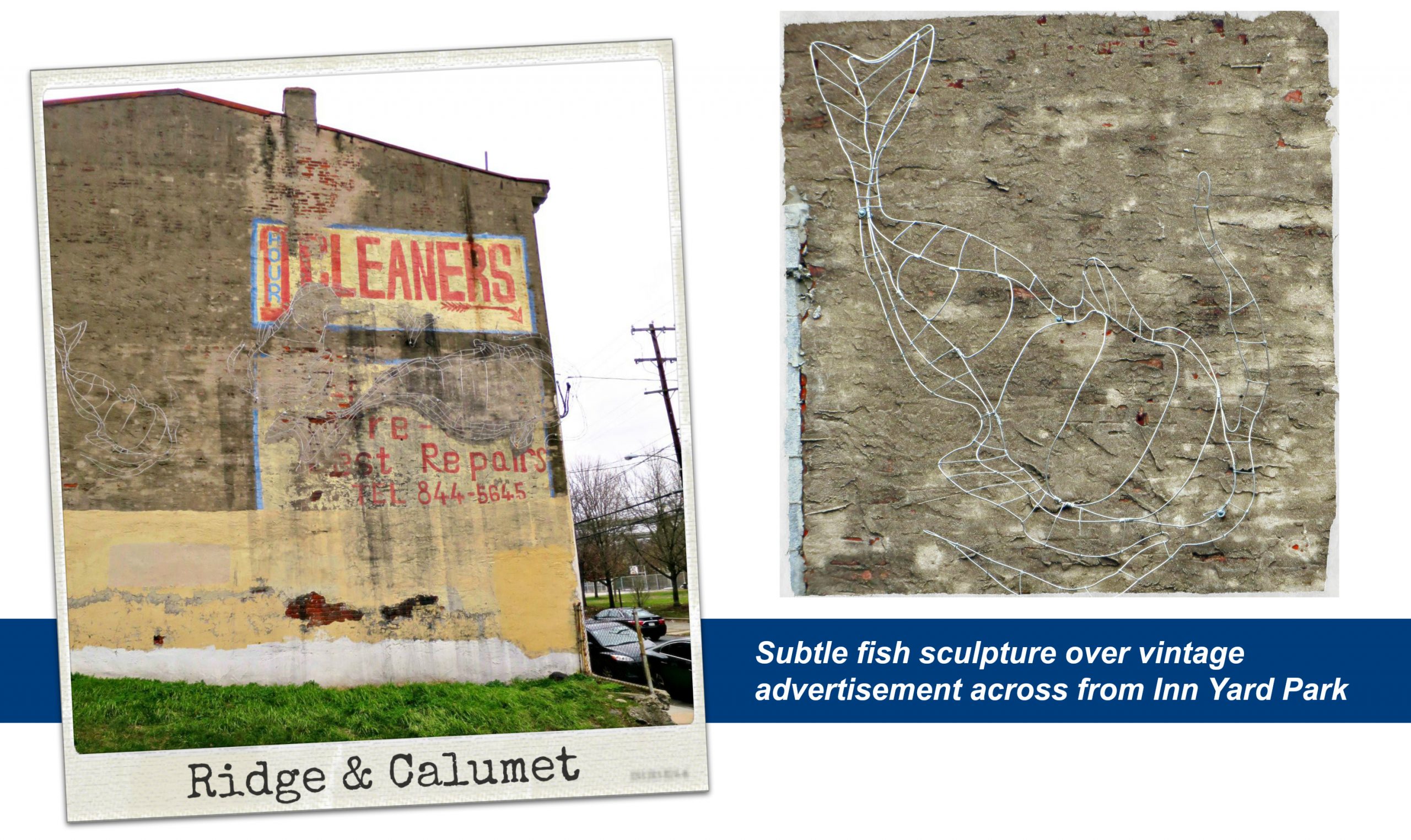 What’s the deal with East Falls and fish?

East Falls began as a fishing resort known as “Fort St. David’s” dating back to colonial times. One of the area’s earliest historical sources describes Philadelphia sportsmen making the trip out in late May for incredible “runs” of catfish that would fill the river with thousands of them, so many that men would literally catch more than they could pull out of the river by themselves.

Our native species was known as the “white catfish,” although it was black on the back and white only on the bottom. Our local fish was not only prolific (and stupid around dip-nets, ha), but also quite delicious. Local hotel-restaurants created their own artificial ponds to corral them for eating throughout the year.

“Catfish and waffles” was a favorite regional dish, usually served with coffee as standard fare since before the Revolution.  A resort-hotel community sprung up here along the Schuylkill & Wissahickon, catering to travelers of modest means but also attracting fancy folks from Philly, who enjoyed coming out for “local color” — food, music, and some of the best lager beer this side of Germany (thanks to a large population of German immigrants who started breweries here).

It’s not surprising East Falls would want to honor our fishy history when we adorned our beautiful “Collegiate Gothic”-style library (completed in 1913). Instead of a traditional rooster, we’ve planted a remarkably detailed catfish:  scales, whiskers, big wide lips… even the fins are delicately striated. 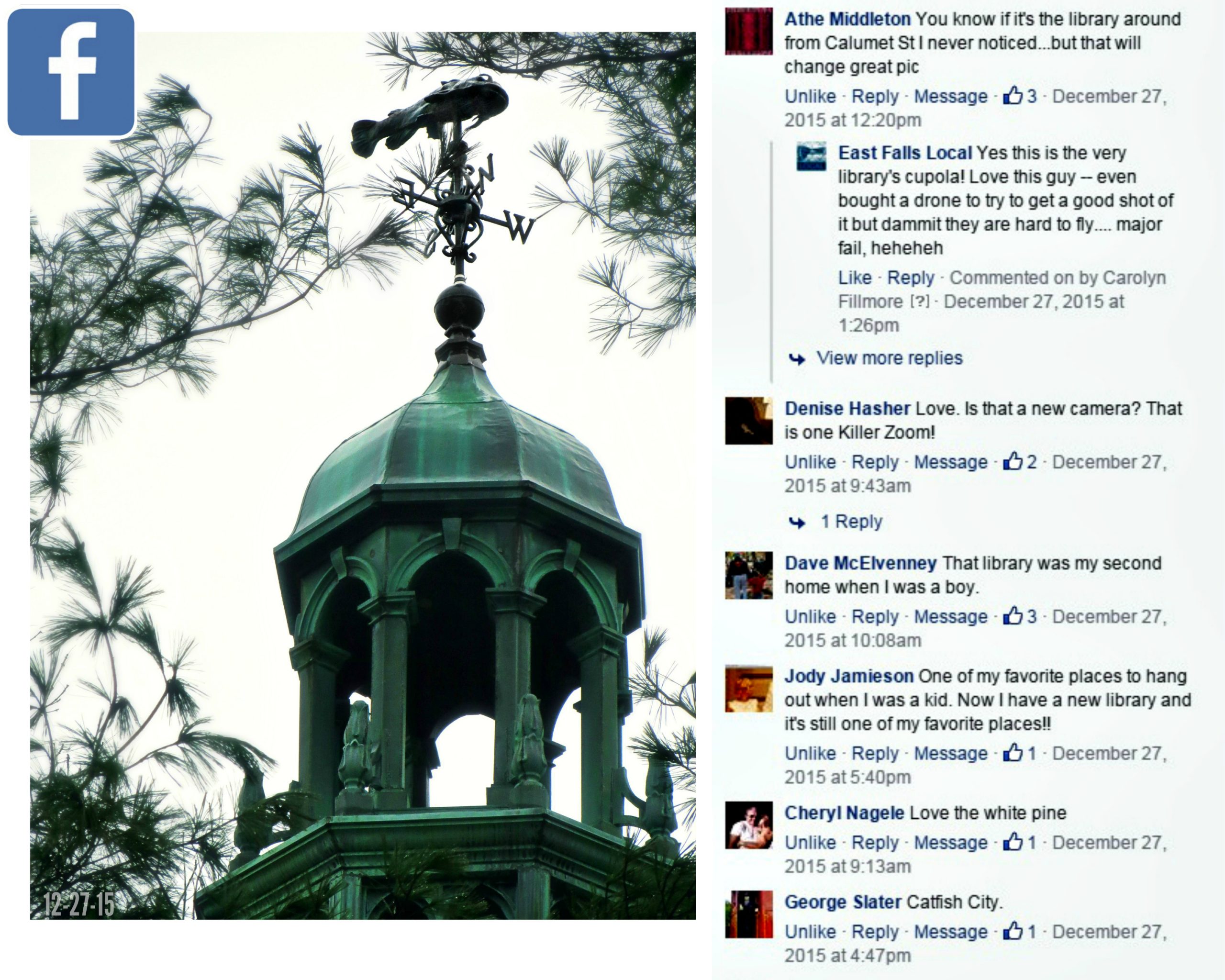 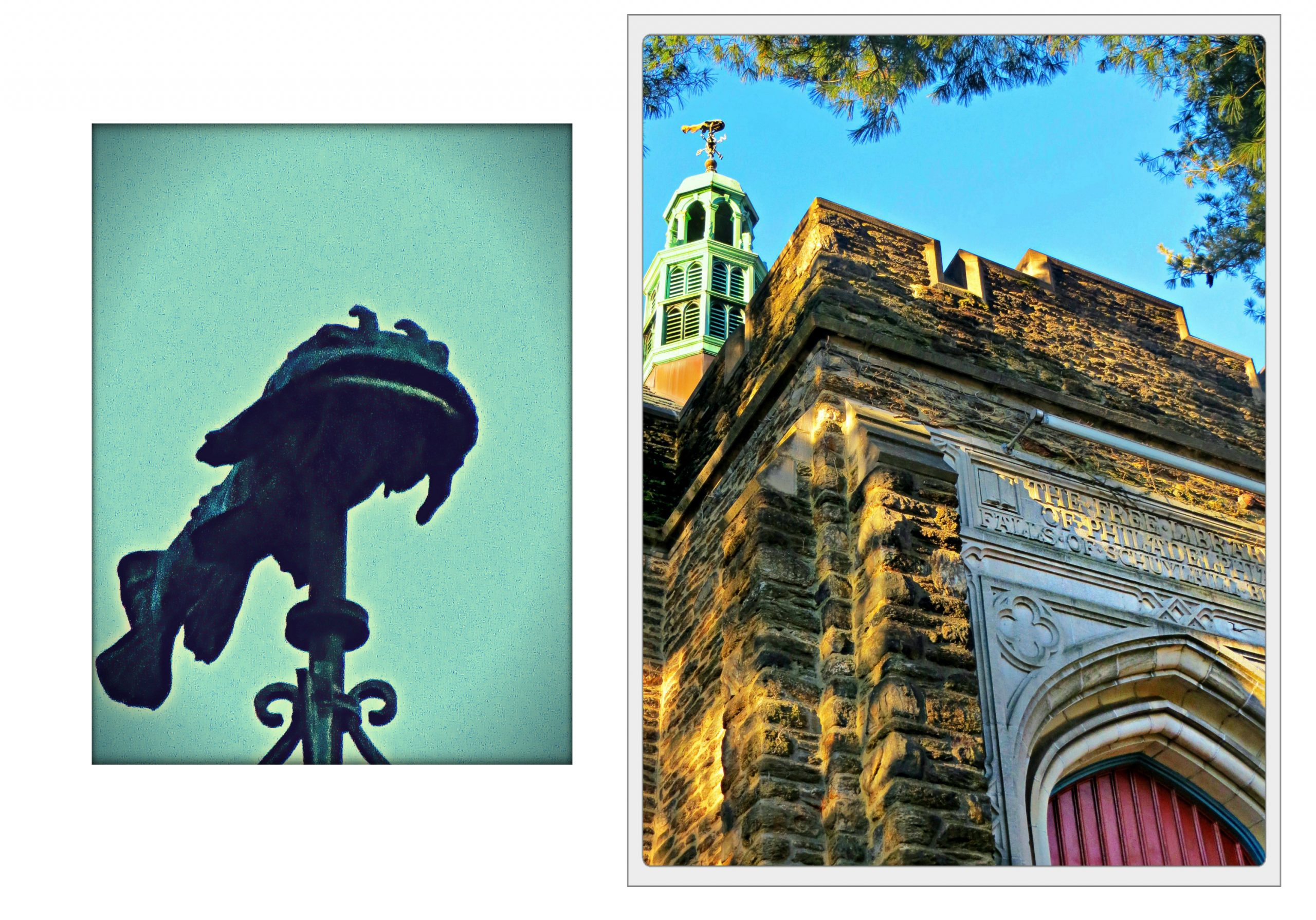 One thing about East Fallsers — we love our cupola catfish, as comments from our facebook page and the members of “I’m From East Falls” attest. In fact, a reader who grew up here chimed in with the coolest story the last time we zoomed in for a close-up.  And he shared awesome pictures!

Big thanks to Mark Pugnetti who wrote us, “In 1986 I was able to see the catfish up close, when it was taken down for maintenance after it was damaged in a storm. My dad, Emil ‘Ty’ Pugnetti saw the catfish was missing, inquired about it, and the librarian at the time was nice enough to let us down to the basement to see it and take some photographs.” 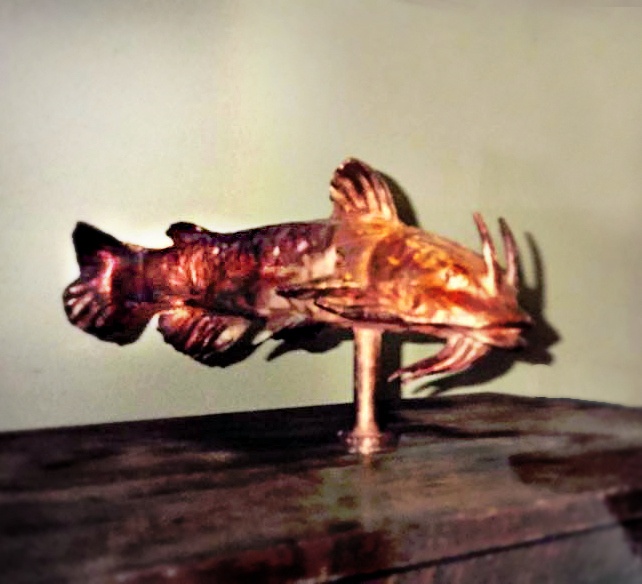 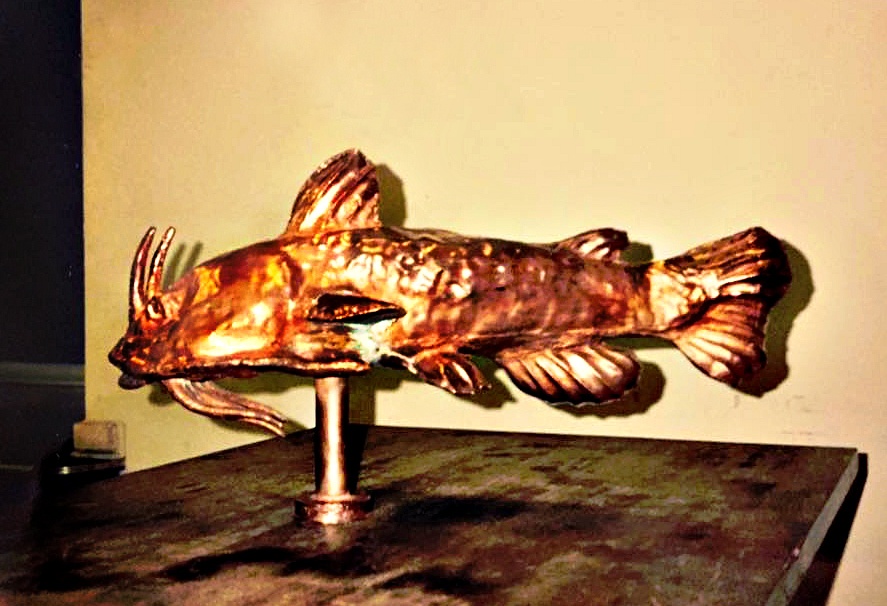 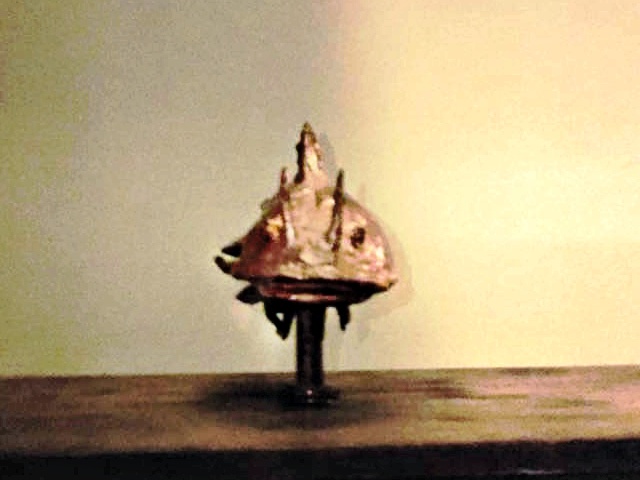 His dad grew up on Calumet Street, admiring the catfish looking down on the neighborhood. Although his father would’ve loved to help repair it (“He could build or fix anything”), he was unfortunately not part of the refurbishing team. Regardless, he was delighted to have had such a close look at the big guy.

We are thrilled to share the Pugnetti family’s images here, as well as the following recipe for traditional Catfish and Waffles, as served at Kurglers Restaurant on South Broad in 1906, that prided itself on serving “authentic” Schuylkill catfish. 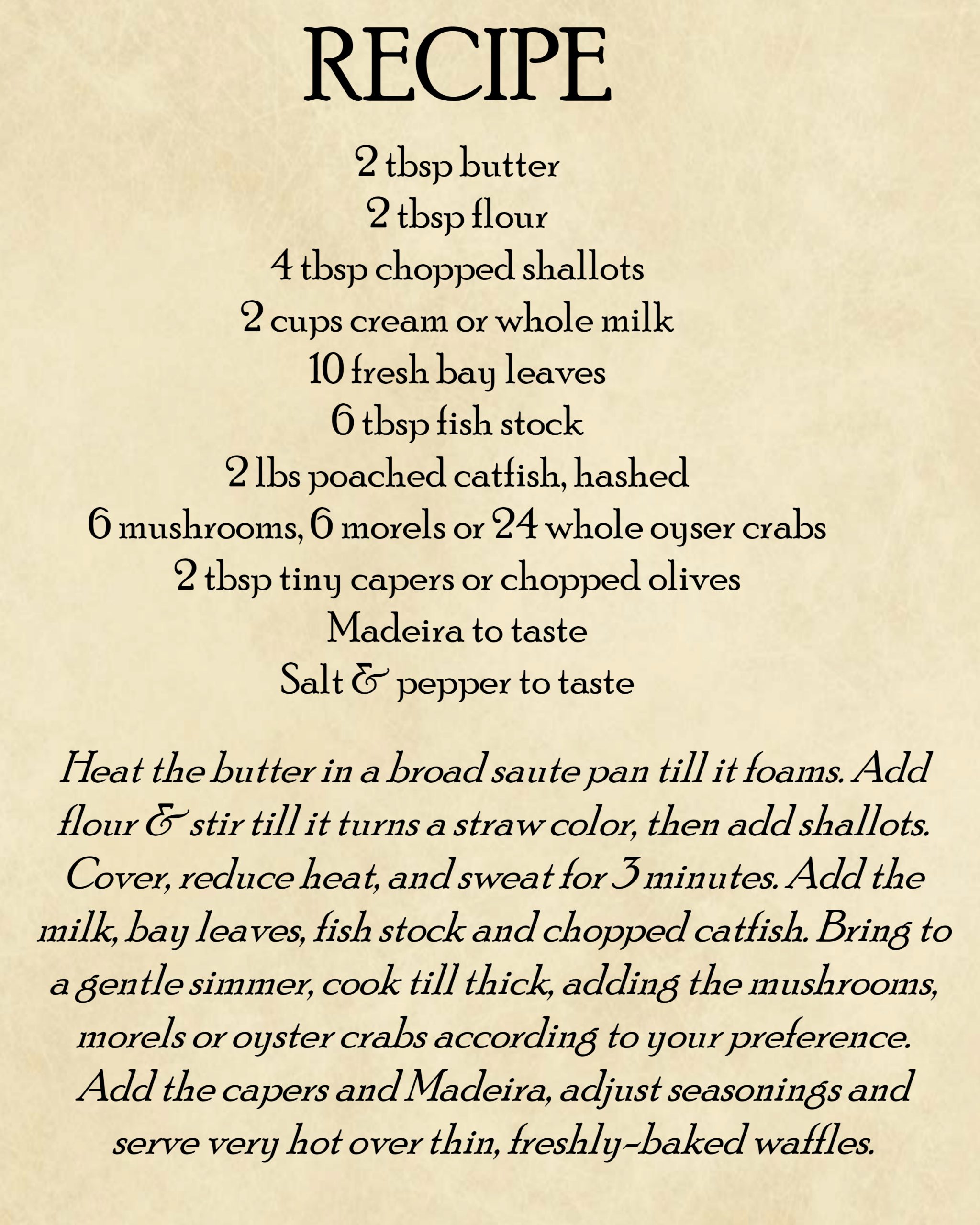 Like history? You’ll love EastFallsHouse.com, where you’ll find an East Falls timeline, a list of street name origins, and more info about old East Falls than you can shake a glass blower’s rod at.

Buddhist Blessings on the Falls Bridge

Imagine all the people, sharing all the world.  [more…]