People tend to think of justice in black and white terms: guilty or not guilty, did they or didn’t they?

In truth, however, many crimes are a combination of contributing factors, some going way back before a defendant was born: abuse, ignorance, poor parenting, generational poverty, etc. When I looked at Kyle Rittenhouse on the stand, I saw one more young man pushed to his breaking point by circumstances he could not possibly be expected to navigate at this stage in his cognitive development.

Kyle Rittenhouse was just 17 years old when he shot those protesters. His trial focused on self-defense, which is beside the point. The real issue here is how this kid felt so threatened by civil rights protests that he armed himself with a lethal weapon to confront an enemy that doesn’t exist. Far-Righters love to throw around the idea of “Antifa” like it’s a terrorist organization but, sorry, it’s just short for “anti-fascist”, which describes many Americans, including WWII veterans.

Rittenhouse’s mortal fear of democracy in action didn’t happen overnight, nor was it born into him. His social and political views were learned from authority figures and reinforced by his experiences in one of the most highly-segregated parts of the US. When you don’t know your neighbors, it’s easy to believe the worst about them, and hard not to act upon these fears. Rittenhouse’s deadly over-reaction shows how misinformation spread by Right Wing media can be dangerous, especially in the mind of a teenage boy, all hopped up on testosterone for the first time in his life.

Yet his trial exposed none of this, and in the end boiled down to media sound bites about Stand Your Ground statutes. None of that mattered. In this judicial model, right or wrong is not the issue so much as what the law allows. And either way, white supremacy wins: guilty, he’s a martyr; acquitted, he’s a hero. Indeed, since he was freed, Rittenhouse has been toasted in conservative media and feted by Trump at Mara Largo.

But he’s not a hero, or a sociopath for that matter. He’s a confused kid who has twice committed the worst act a human can inflict upon another. No jury verdict can erase those memories that will haunt him the rest of his life. The court system may have released Rittenhouse from jail, but he’ll never be free until he’s able to move past the toxic people and perspectives that steered him wrong that night in Kenosha.

What if I told you there’s an alternative approach to justice that flips the focus on criminal behavior from guilt and punishment to accountability and payback? I should probably use the word “restitution”, but for many victims this is unrealistic. No amount of cash can un-abuse a child or bring a loved one back from the dead, and furthermore, yes! Restorative justice does empower victims to exact their own toll from those who’ve done them wrong. 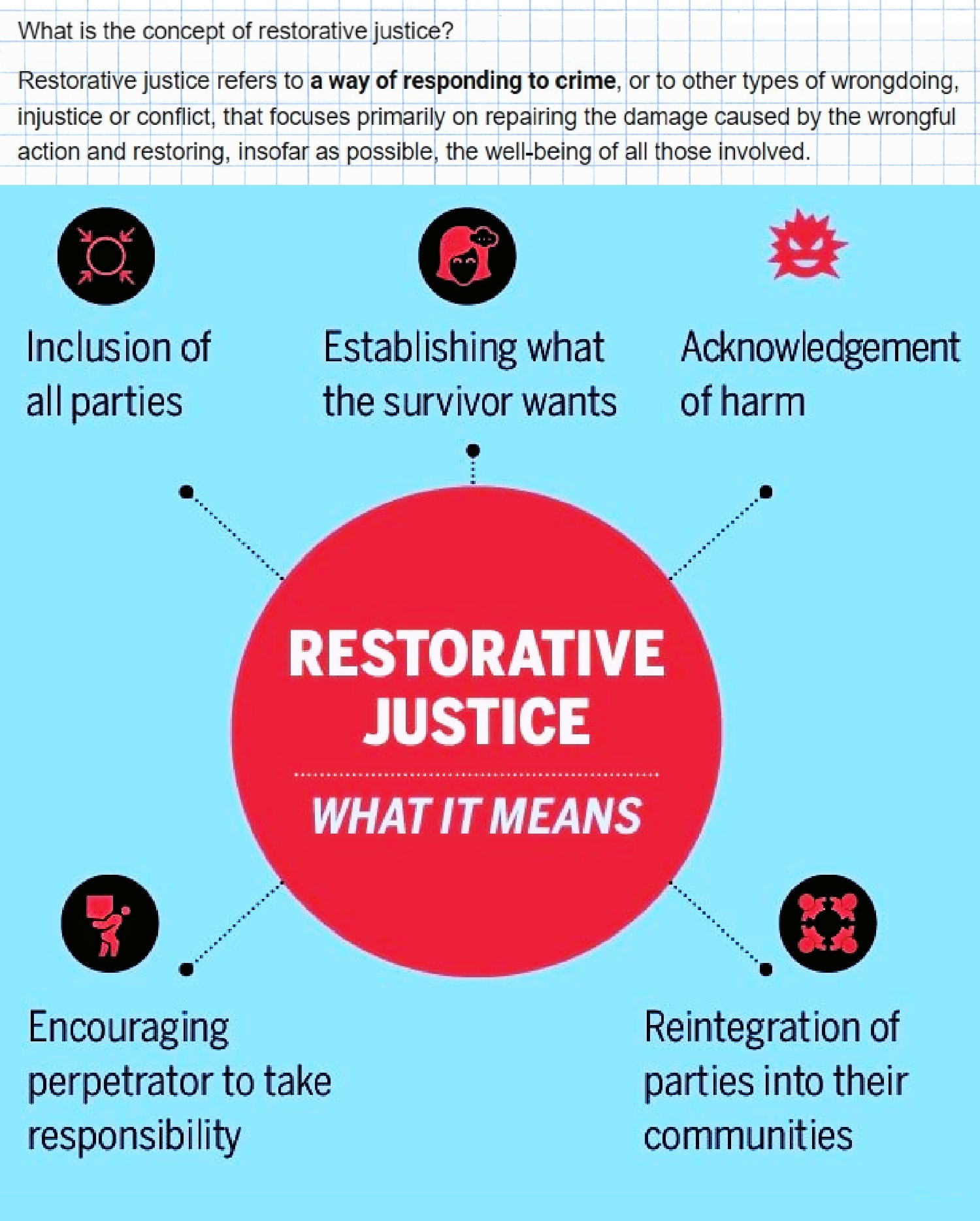 People affected by crime get to tell off the person responsible – first through an intermediary, and then face-to-face, in the safety of a moderated conversation. Individuals express and explain themselves. Questions are answered until everyone’s satisfied. Apologies and emotions often come tumbling out, with tears from both sides of the table.

When they’re ready to move forward, the victims themselves get to suggest ways the offender could address some of the damage they’ve done. Caseworkers, prosecutors, and others weigh in. The judge’s sentence officially recognizes the consensus for what can be done to make amends and prevent the same thing from happening in the future. Typical requirements include therapy, education, compensation, and community service.

Fully 85% of victims who go thru the process are satisfied with the outcomes. Restorative justice also leads to a drop in re-offending: seems people who couldn’t care less about their police record truly feel bad when they realize the pain their crimes have caused. More than 35 states offer some form of restorative justice – including PA and WI — and we know that it works (although “tough on crime” programs get much more funding & attention).

The Rittenhouse case would’ve been a great opportunity to showcase restorative justice. Prosecutors could’ve offered a plea deal he couldn’t refuse and avoided the media circus; taught the kid some history, empathy & understanding. Unfortunately, our injustice system instead made a boy killer famous and released him to society without so much as an anger management class. And now I guess we’ll all pretend to be surprised when he shoots another demonstrator.

Should Kyle Rittenhouse be in prison? Hell no. But neither should any of the 50,000+ youth currently behind bars in the US. Punishment alone fails to address the root cause of juvenile crime. Restorative justice provides young people a path to a fresh start, along with important tools like communication and reconciliation skills that will help them throughout their lives. There is no better investment in our future. Peace.

Agree? Disagree? Leave your comment below. Please follow the links in this article for deeper dives; use mediabiasfactcheck.com to verify sources and follow our five “BS Busters” to sniff out fake news like a champ.

Do The Right Thing