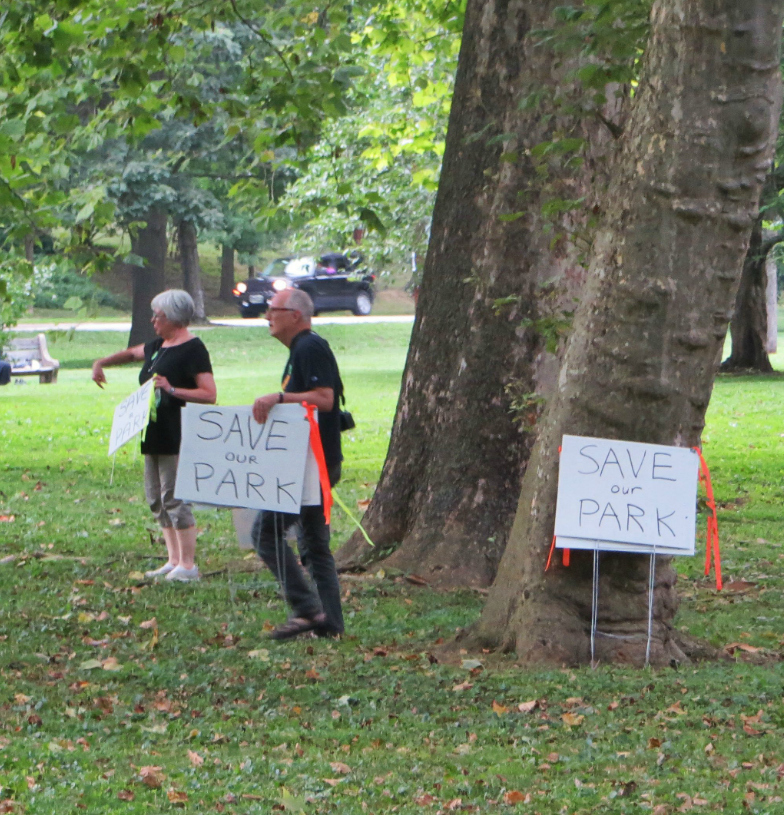 And they said it’d never happen!

Over a decade ago, an East Falls Community Council committee selected McMichael Park as the preferred place for a new playground, igniting an epic neighborhood clash that quashed the movement in its tracks (and gave us Inn Yard Park, as consolation). In early 2016, a Nextdoor debate reignited the cry to activate this traditionally passive park at Henry and Midvale.

This time, neighbors went straight to Parks & Rec and Councilman Curtis Jones, who hosted a public showdown where many parents made their case while other Fallsers decried the loss of an “emerald gem.”  By October, Councilman Curtis Jones and Phila Parks & Rec announced a compromise:  a “natural playspace” using less than 3% of McMichael’s 5.6 acres, designed with community input from both sides.

Fundraising efforts soon kicked off, to the tune of $12,000 raised at Wissahickon Brewery in the first (and so far only) event hosted by a new McMichael Playspace committee organized under EFCC’s non-profit umbrella. A contentious meeting followed, where a handful of longtime residents demanded a vote to block the Council’s support. The motion failed by four votes.

In a last ditch effort, the Friends of McMichael Park initiated efforts to have the park historically designated — and possibly preserved as a potential site for Revolutionary War artifacts based on local legends that Lafayette encamped here in 1777. Philadelphia’s Historical Commission, however, deemed these claims unfounded and also fruitless:

“The nomination seems to assert that, if McMichael Park is designated, no playground could be constructed at the site. In fact, the designation of this park would not preclude any future construction, including a playground.”

Despite community support, though, the playspace still faced an uphill battle for funding. Curtis Jones to the rescue! In spring 2019, he announced he’s advocating for  two different playgrounds in East Falls — he allocated $250,000 for McMichael and has offered his “full support and fundraising” for Mifflin. While Mifflin is still fundraising for their million-dollar plan, this generous donation clears the way for McMichael’s natural playspace to begin construction of Phase One this spring.

Fun Fact: “Natural play” refers to creating a playspace that complements the rustic features of the landscape as opposed to disrupting them with loud colors and artificial shapes. The idea is to create interactivity with simple, sustainable materials to maintain a pastoral vibe. Such a design also helps foster native ecology, manage stormwater and increase biodiversity. Ideally, McMichael Park would not only be more fun for kids, but a healthier environment for everyone. 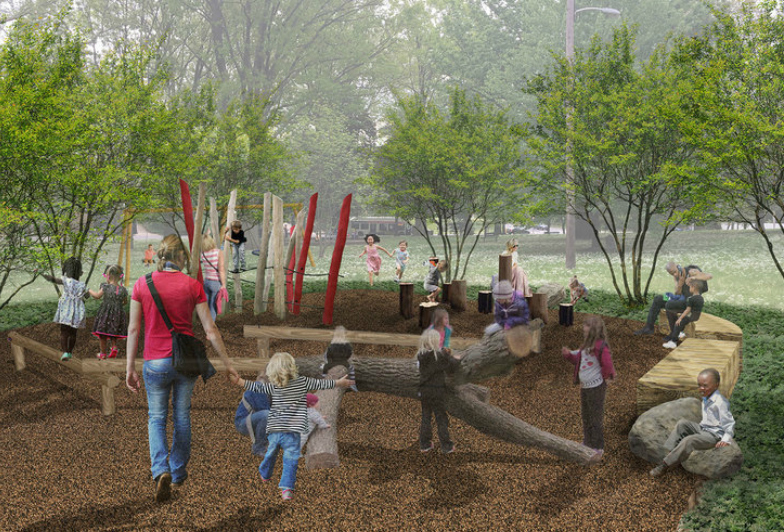 Phase One addresses the “North Pod,” located near West Coulter Street, and will include seating, lighting (maybe), landscaping and an accessible pathway to fun and challenging play elements. Some features suggested for McMichael on SALT’s website include balance beams, stepping stumps, climbing structures, wood cookies (?) and even swings. Come see which ones made the cut for the final design!

A representative from Philly Parks and Rec is expected to be there to answer questions/address concerns, as well. Perhaps we’ll even still have some push-back from “Save Our Park”-ers who haven’t given up the ghost of a passive greenspace? Hopefully, there’ll be room for all neighbors to speak their mind — and feel heard. 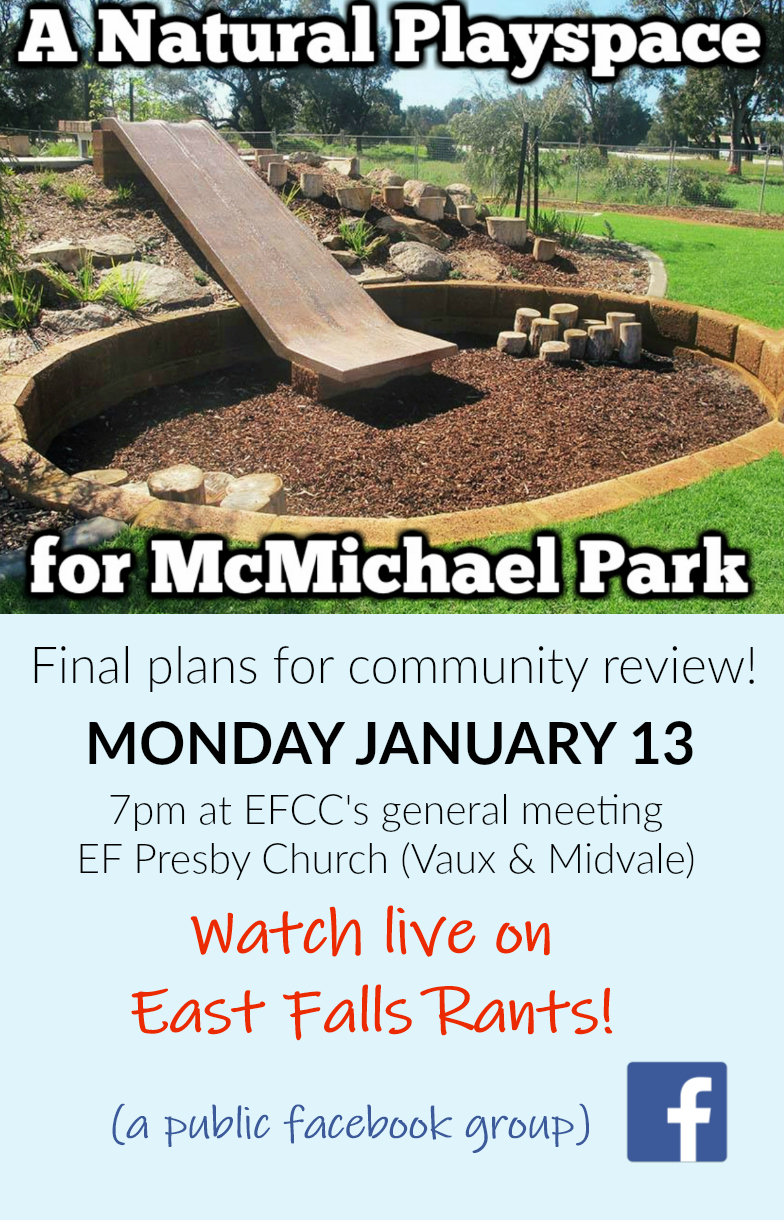 Whatever happens, we’ll be there! Watch us on Facebook Live via the East Falls Rants page (our cheeky name for this public community group with almost 5,000 members). We’ll also update this article with new plans/renderings.

Congratulations, neighbors! The groundbreaking this spring will be, literally, ground-breaking for East Falls – and long overdue (in our humble opinion). Cheers for more active parks and more neighborhood meeting spaces!

For more information about McMichael’s natural playspace, visit mcmichaelplayspace.org and @ACTIVATEMcMichael on Facebook and Instagram. Join the East Falls Parents Network on Facebook for even more family-friendly neighborhood scoop.

With clocks “Springing Forward,” now’s the time to plan for warmer weather and the latest trends on the horizon. [more…]

Spring’s almost here – so is leptospirosis. A few tips from Dr. Patten for keeping your pup safe. [more…]