A joyous ribbon-cutting at McMichael Park

And they said it would never happen! For almost 20 years they were right, as groups of parents struggled at times with the Friends of McMichael Park group to win approval for a playspace. But as the saying goes, everything is impossible until it’s done.

And what a day for it to be done! A cool, brilliantly sunny March day had a hint of spring in the air as Kathryn Ott Lovell, Councilmember Curtis Jones Jr., and other speakers announced the official opening of the playspace, followed by several children performing the ribbon cutting.

Other kids had no time to wait for the official ceremonies, of course. They’d taken to the swings and rope bridges well before the podium had been set up. They formed a raucous backdrop as the adults went through their speeches, a few of which we’ve excerpted below.

Kathryn Ott Lovell:
Hello, I’m the Commissioner of Philadelphia Parks and Recreation. I am so excited to be here today. I was probably just a few months into this position when Councilman Jones invited me to a community meeting. And I thought, “Oh, this will be fun.”

And it was… informative, right? Everybody who enters career in public service should have to start out with a community meeting like this one. I want to quote my fictional idol Leslie Knope — if anyone’s seen Parks and Rec — but Leslie had a saying that “Yelling at meetings is just people caring loudly.”

And I think that’s absolutely what was happening here, and in East Falls over the past five years. This is good news! So many people here care so much about this park. Every neighborhood in the city needs to have advocates and champions who are passionate about their public space, who believe in its power to uplift, to transform, and most importantly, to connect communities.

Everyone is welcome here. That is the power of parks and playgrounds. And I want to thank everybody who helped make this project possible. First and foremost, I want to thank your Councilman, Curtis Jones. He drew a line in the sand and he said, “I believe in this playground. I believe in these parents and Park stewards. And not only am I going to make that happen legislatively and logistically — I’m gonna pay for it as well.”

Let me be clear this playspace would not be happening without him. So thank you. And to our mayor, Jim Kenney, who has done more for Parks and Recreation and public space than any mayor in the history of the city. The Rebuild Initiative, which is contributing hundreds of millions of dollars into parks and public space, is only possible because our mayor had the courage to make that initiative happen. The public spaces like this in an affluent community like East Falls are not the exception, they will be the norm in every single neighborhood in our city.

Councilmember Curtis Jones Jr.:
Five years ago, Kathryn Ott Lovell got baptized under fire. She came into a contentious community meeting and saw the level of passion. And at the end of the day, commissioners like her get paid to make tough decisions. Sometimes in the face of differing opinions. See those kids playing behind us? That is thanks enough. And what the commissioner said is very true. A lot of people were opposed to putting something like this in an area that is pretty well-off, right? But I’ve seen beautiful parks like this, in every part of my district, enjoyed by every social and economic strata. And so I get to see the good works that our tax dollars pay for, and I’m so very thankful

More Good News
The event ended with a happy surprise as Christina Kazakia (of the “Activate McMichael” group, which was formed by “pro-playspace” parents) announced that her group would be merging with the Friends of McMichael Park to maintain and preserve the park. “We found a peaceful way to come together and it’s going to be great. We want to encourage everyone to keep this momentum going. We need your help. We need your voice. Everyone’s voice matters. Come to our meetings, come help keep the play space clean and welcoming. And thank you, everyone, for coming out.” 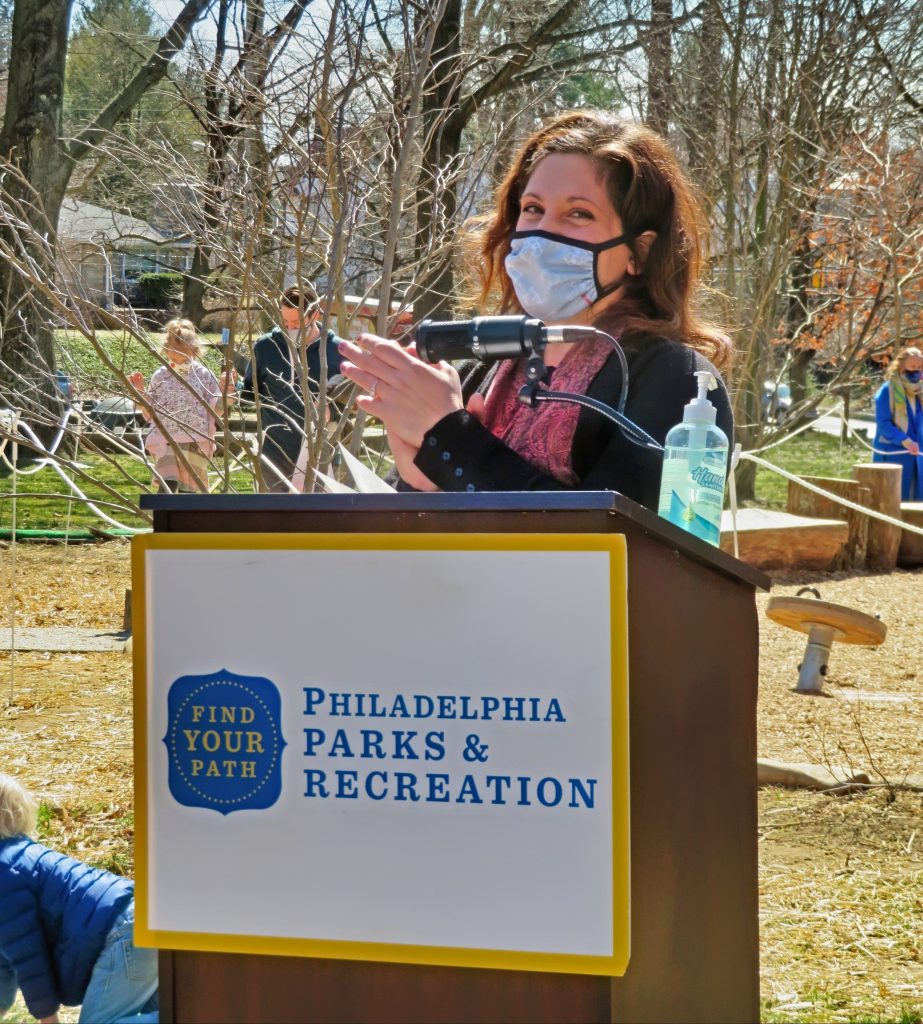 The merging of the groups will provide a wealth of volunteers and activists that should keep the park in good hands for generations to come. For more details or to lend a hand, visit either the Activate McMichael or McMichael Park East Falls Facebook pages

Purple Queen on the Scene

Art in the Park