Unable to handle another voice in the community, the Fallser’s latest attack on East Falls Forward demonstrates how poorly EFCC plays with others. But EFF’s president Angela Velez will not be browbeaten — read her full response here: 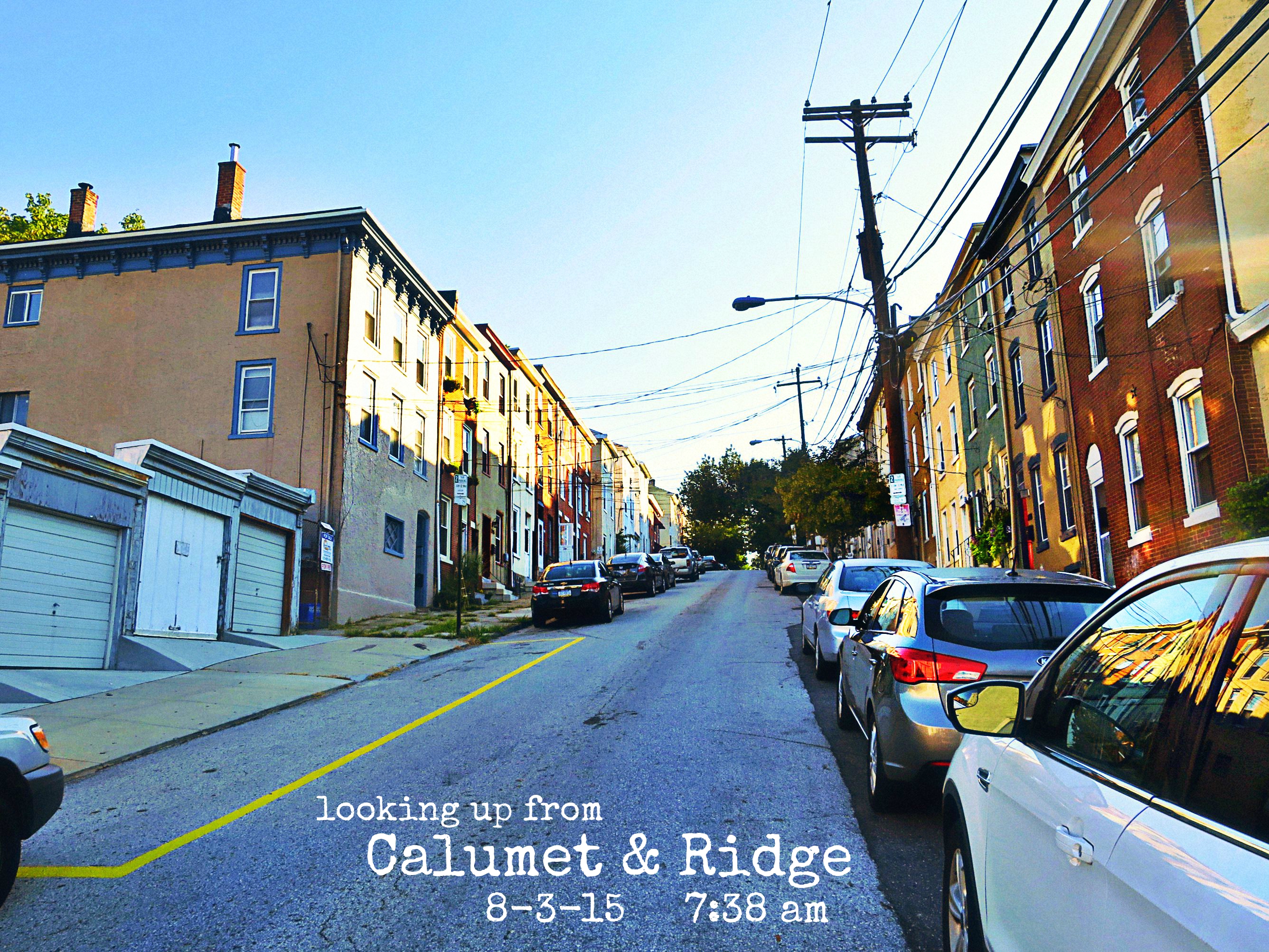 Despite the fact that the officers of East Falls Forward (EFF) have stressed time and again our wish for EFF to be a collaborative and proactive organization that works to help build the business corridor, we cannot account for outside factors that present the need for us to be reactive, one such factor being The Fallser and its writers. Today, we address the article in the August 2015 issue “East Falls Forward Approved as ‘RCO’.”

I, Angela Velez, offer you the full text of the email correspondence between me and Barnaby Wittels. In doing this, I hope that you will be able to read the full email in context, and I am happy to share with you my feelings at the time I wrote the letter, some of which I continue to feel today.

[Note: This message, along with the email correspondence, has also been submitted for publication in The Fallser next month.]

We purchased our home at the end of February and moved in shortly thereafter. After being here a couple weeks, sleeping here, and walking around, I got a better feel for the neighborhood. Businesses that I thought were businesses turned out to be vacant storefronts. For the park I thought I would have easy access to given my home’s proximity to it, I played leap frog to get there due to traffic congestion (even when using the crosswalk). Each morning, I would awake to the sound of an angry driver laying on his/her car horn because the traffic on Ridge Avenue was not moving. I talked with neighbors and tried to accept these issues as normal, yet they continued to eat away at me.

Rather than pondering the problem but presenting no solution, I decided to ask questions and become informed. I saw an article in The Fallser welcoming the “Voice of the Community,” as the article was entitled. So, I presented my questions to Barnaby and copied another organization, East Falls Development Corporation, which, at the time, I knew to be a neighborhood player but was not quite sure how it fit in with East Falls Community Council. And that brings you to my email below (bottom of message): please read it. 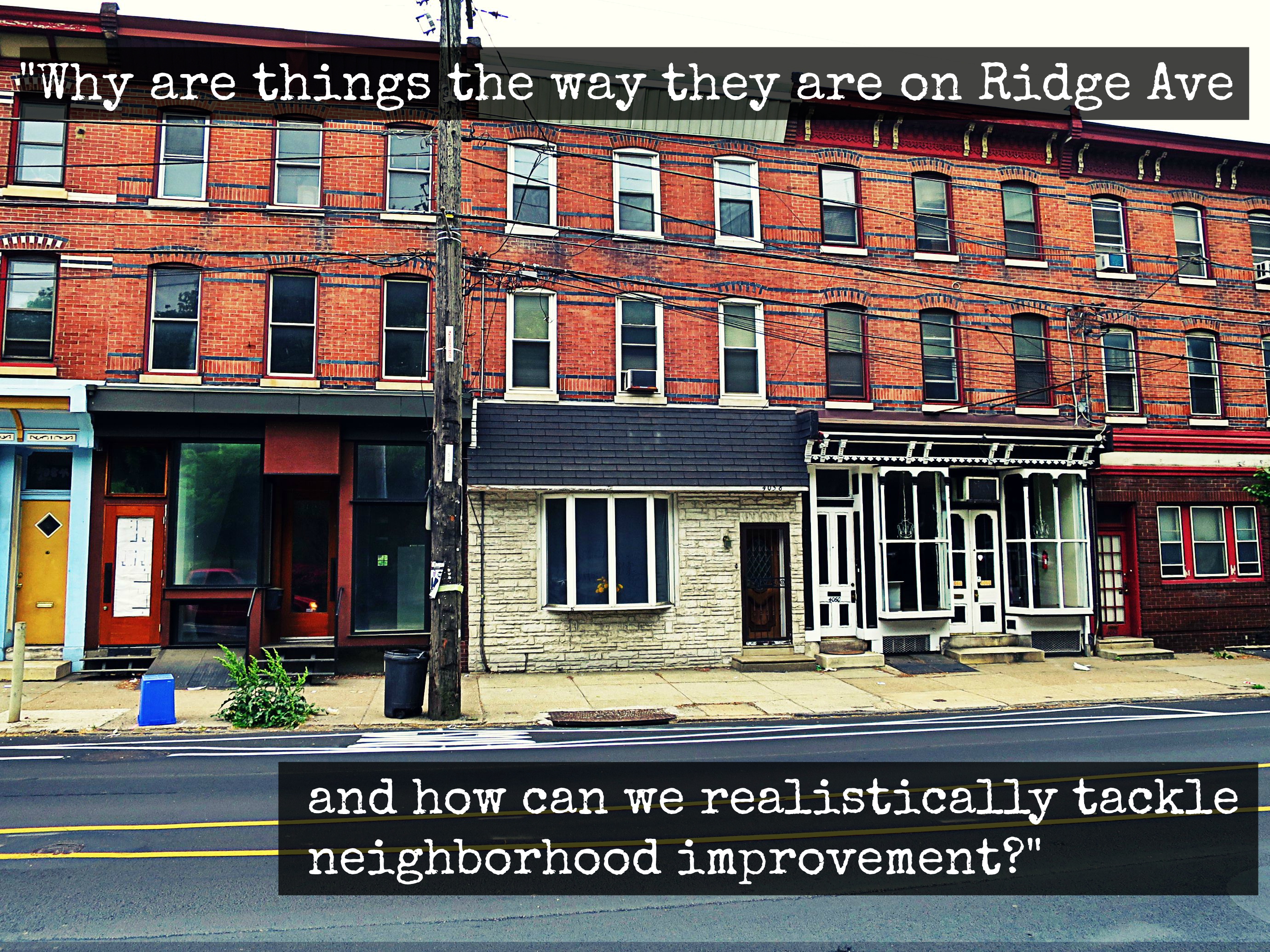 I am happy to discuss anything in my email with anyone who may want to discuss it, and, rather than spinning Barnaby’s response to fit my agenda (whatever that may be), I will let his response speak for itself. What I will say is that I found the response, in general, provided me with no real answers to the overarching questions in my mind: why are things the way they are on Ridge Avenue and how can we realistically tackle neighborhood improvement?

That leads us to East Falls Forward. I would like to remind everyone that this group is intended to be a discussion forum for the community: it is not a place where I, or any of the other officers, go to push our individual agendas. The goal is neighborhood improvement. The opportunity for another collective voice to be heard presented itself and I offered to serve as the group’s president to get it up and running, which we have done, and EFF is officially a “registered community organization!”

And here we are now. I am deeply saddened by the criticism EFF has received from various parties. Perhaps I was naive to think that we could get together to discuss positive neighborhood improvements and have the support of our neighbors. On a more personal level, I am saddened that Barnaby has shared my email with someone who took the time to attempt to discredit and attack me publicly. At no point is EFF supposed to be about me individually, where I live, my profession, and my feelings on the neighborhood nor do my feelings alone control what happens with the group. But, as noted above, we cannot account for outside factors. I can control only how I respond, which I will share with you below. 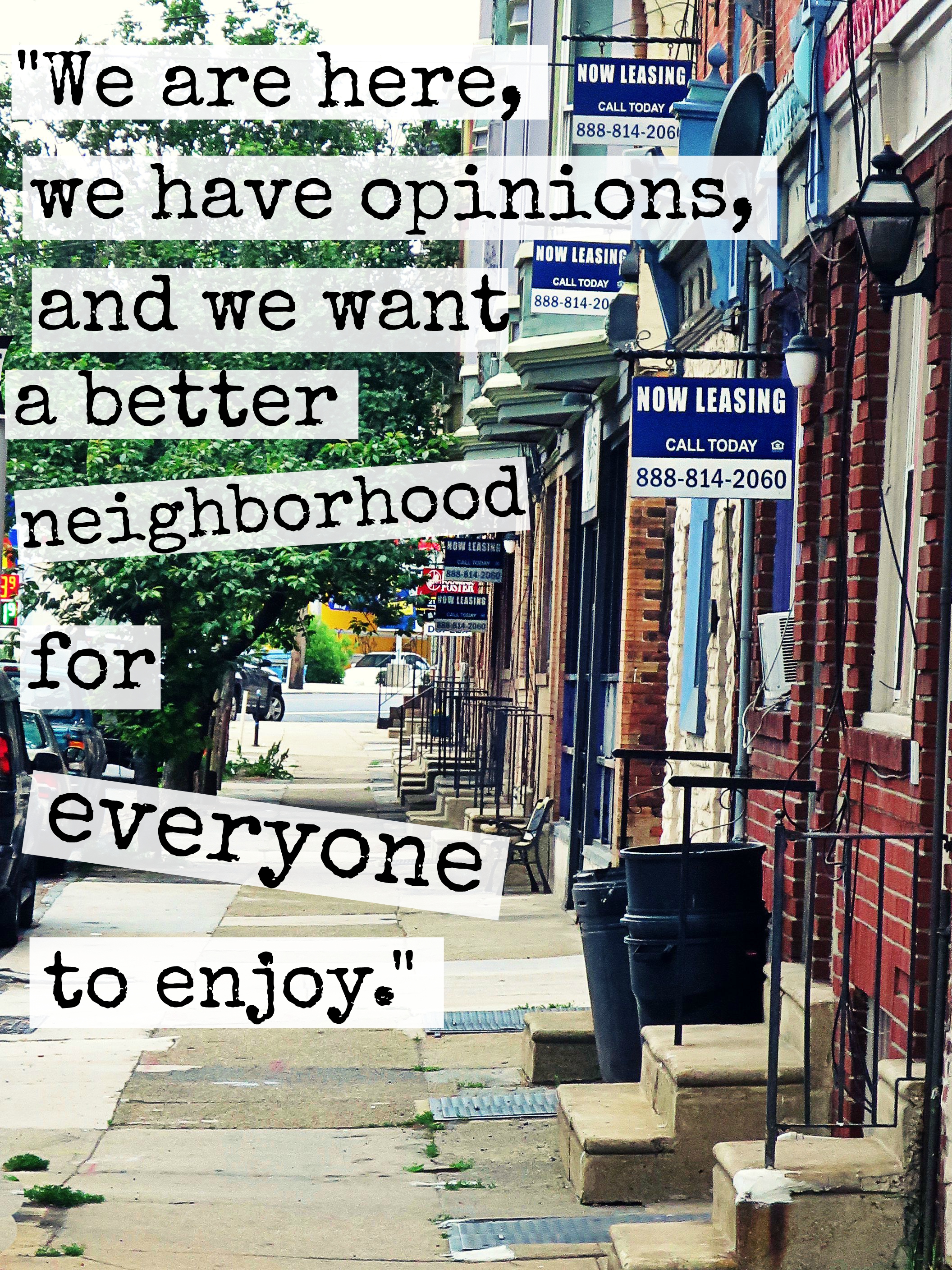 First, when prompted to share my voice with respect to aspects of this neighborhood, I will be very reluctant to do so in the future. Perhaps “The Voice of the Community” was calling for only positive statements regarding the neighborhood because, in this month’s article, it is noted that the concerns/inquiries I presented in my email to Barnaby were merely “complaints.” I feel that the references to my “complaining” and the attempt to “address [my] complaints” serve to minimize and/or dismiss my concerns.

Second, my living in the area for a few months or this being my first home purchase does not make me any less of a resident of East Falls. I am here, I live here, my money is invested here, and I am now personally invested here. Again, after reading this month’s article, I am left to feel that because I am new to this neighborhood, my concerns matter less (or do not matter at all). Furthermore, whether I live here for one year, 22 months, or ten years, I am a resident of East Falls for that time and would hope that my concerns are treated with the same consideration you would want for your own concerns.

Last, it was never EFF’s position that I would be president long-term. As we discussed during our first meeting, the current officers were presented and elected so we may get the group up and running (or speed walking at least). We plan to hold elections for officers in December for anyone who may be interested. Until then, perhaps I can look forward to The Fallser’s monthly critique of EFF, me, or both. And then maybe, after December, people can criticize the group’s new president and his/her neighborhood interests, goals, and concerns . . . .

While I am president of EFF, however, I will not allow myself or EFF to be browbeaten. I will not sit quietly and allow the message to be that those who voice their concerns will be publicly shamed for their candor. We are here, we have opinions, and we want a better neighborhood for everyone (residents and visitors) to enjoy. I ask that you treat me, EFF, and our collective or individual concerns with the courtesy and respect you would give to any other neighbor (or friend if this month’s article is indicative of how you treat your neighbors). We do not have to agree, but we do have to live together. 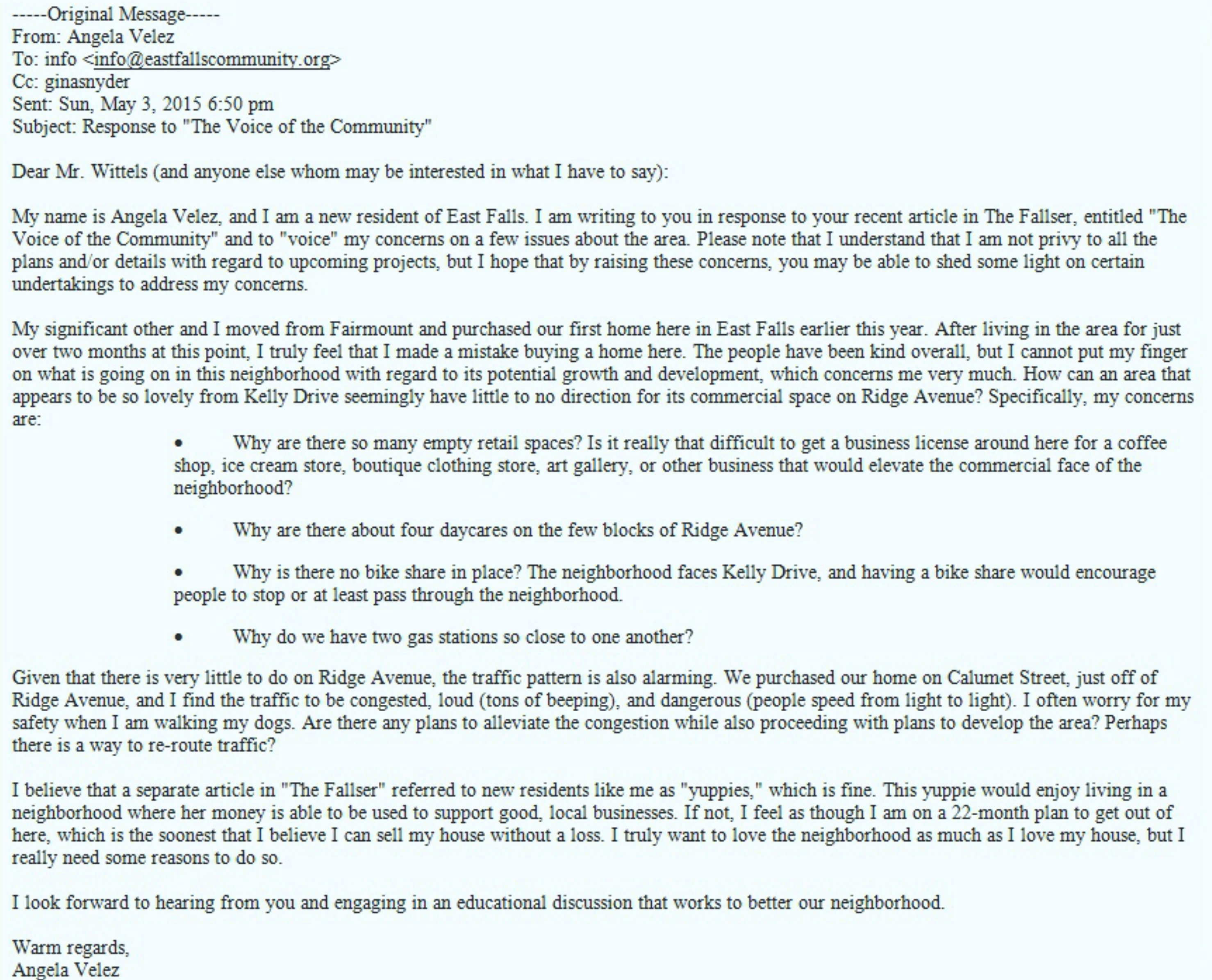 LAST CORRESPONDENCE (no welcome to meeting or follow-up from BW was forthcoming):

WHAT IS GOING ON?   Find out more about East Falls Community organizations here, or check out our recap of the EFCC meeting that angered many East Falls neighbors into starting their own organization: Sour Grapes and Missed Opportunities.

JOIN EAST FALLS FORWARD or just check out their website and new forum where members candidly express all kinds of opinions about East Falls!