The redevelopment of the old auto supply store at Wayne Avenue and Rittenhouse Street, now the home of Ultimo Coffee and Germantown Bike Supply (with a connected triplex up top), has breathed new life into the block while showing how mixed-used development can be organ­ically integrated into the neighborhood.

What people might not know is the project was done by a local developer who grew up in Ger­mantown. Walt King, 32, through his organization Juniper St. Partners LLC, spent about two years renovating the property.

“I had an inkling of what the building could be,” said King. He previously had only ever done rowhouse renovations, and described his thought process as, “’What’s a really hard and crazy thing to do?”

King was raised in Blue Bell Hill, the son of an architect mother and carpenter-contractor father, so getting into real estate was a natural fit. He lived in South Philly for several years and spent a few months in 2016 on the deck of a commercial fishing vessel in Alaska. Afterwards he moved back up to Germantown, and in 2017, did his first German­town renovation project, a rowhouse on Knox Street.

After a few more projects, King enrolled in Jumpstart Germantown, the real estate development train­ing program founded by developer Ken Weinstein. “There are good founda­tional classes, but the real benefit is the network,” King said. “Ken and Philly Office Retail have created an ethos of collaboration, where developers share contacts and resources. It’s a real abundancy vs scarcity mentality, which I hope continues.”

The development of the Ultimo coffee shop property took about two years. It was complicated, it went over-budget, and at the last minute, the planned tenant for the retail space backed out. But then King linked up with the owners of Ultimo Coffee, who had recently moved to Ger­mantown, and the rest is history, with the coffee shop opening in March 2019. 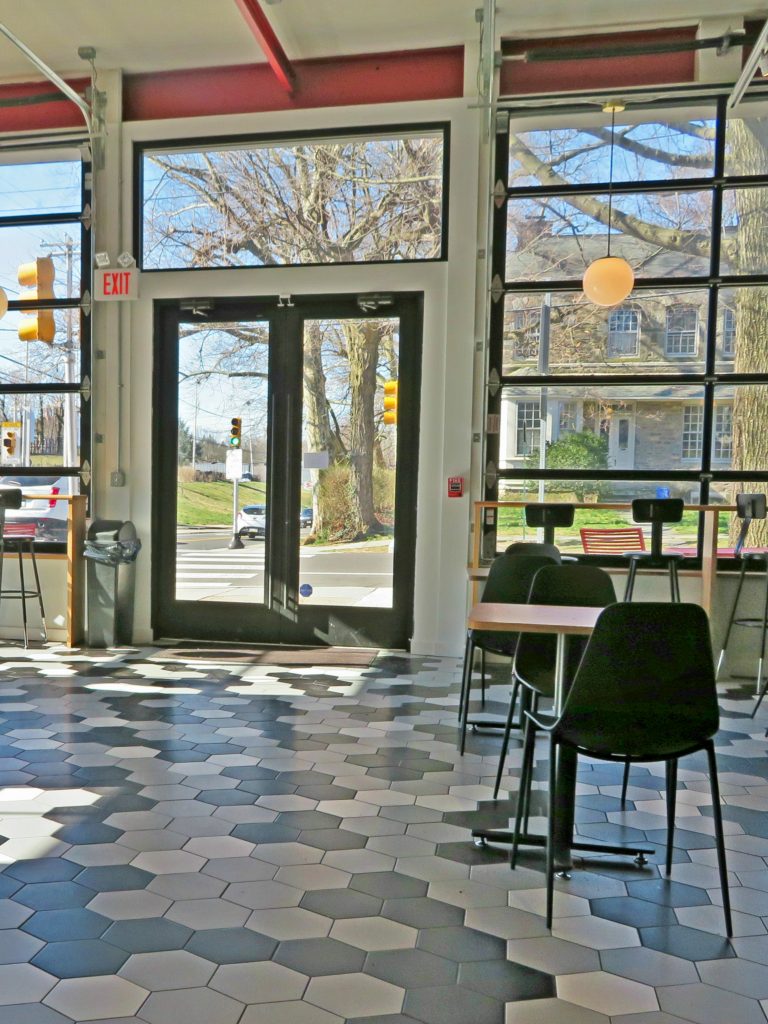 King, who has stepped back from full-time developing and currently works a 9-5 with a green retrofitting company, repeatedly credited others involved with the project and his investors, including Weinstein, with making it a reality. But since he ultimately is the one who executed this project, the Local sat down with him (in Ultimo, of course) to get his take on development in general, gentrification, Germantown, and building spaces people use and love.

Local: What kind of development do you think would help lift Germantown?

King: We need to focus on walkability, mixed-use projects, and strengthening our commercial corridors. I’m a big fan of the Plan­ning Commission’s Phil­adelphia 2035 plan, which uses zoning to further these goals – our councilperson should sign that plan into law tomorrow.

So close to the Wissa­hickon, we are blessed with great bike infrastructure and we should invest to make it easier to get from our neighbors to the trails. We also have fantastic Regional Rail. Our neigh­borhood is car-centric, and that needs to change to give equal access to bikers and pedestrians. We need to get beyond the parking debate, which will require more local shops, better public transport, and a shift in mindset. On a personal level, food is a huge thing. There’s a couple coffee shops now – but there’s very few meeting places where people can gather and eat in Germantown… maybe that will be my next project!

What development do we need to steer clear of?

Growing up with an architect mother, I have strong feelings about what development should be. Honestly, I hate a lot of the new construction, we call them “s*#* boxes” at home. People are just trying to put up stuff for as little money as they can and get people in there. From a policy perspective, I don’t know how you can guard against that. But what is not talked about enough are consumer decisions. Why do people want to buy a $500,000, new construction house, versus buying a $350,000 house and reno­vating it? Back to my first point, any development that is car-centric is bad for our neighborhood. For example, the Chelten Plaza at Chelten and Pulaski is what we should avoid going forward – we spent public money to build a giant sur­face parking lot… why?!?

Do you think Germantown’s at risk of cruddy development?

It’s very at-risk. If there’s a market for it, people will build it…. How many times in South Philly do you hear about an old church being torn down or a historic structure like the chocolate factory on Washington Avenue being torn down to do new construction? We have big tests ahead with Germantown High School and Germantown Town Hall – those projects will define the next few decades of our neighborhood.

The one good thing Germantown has going for it, kind of a good and bad thing, is the houses are big and lots are mostly zoned single-family, so RCOs [registered civic organizations] do have a lot of say in what happens in the neighborhood. …. We’re far enough away from the city where we’re not going to have those types of Brewerytown, South Philly, Northern Liberties pressure on Germantown, so change will happen more slowly.

Germantown is already changing. We have a great mix of long-time residents, people who moved back (like me), and new folks looking for an affordable neighborhood. There is more positive energy in Germantown today than I can ever remember with new businesses opening and homes being renovated.

When it comes to neighborhoods, negative change is often very slow, taking decades for the paint to peel and wood to rot, and positive change happens much more quickly, which leads to strong reactions and opinions. I think a big myth is that people moving here creates a zero-sum game, that if something new opens up, that somehow takes away from long-time residents. I don’t think that’s true.

I feel that Germantown as a neighborhood has a really interesting but tragic history. If we focus on renovating existing buildings, strength­ening our corridors and finding creative ways to keep our neighborhood diverse we’ll have a great future.

This interview was condensed and edited for clarity.