When it comes to skunks, distance is best 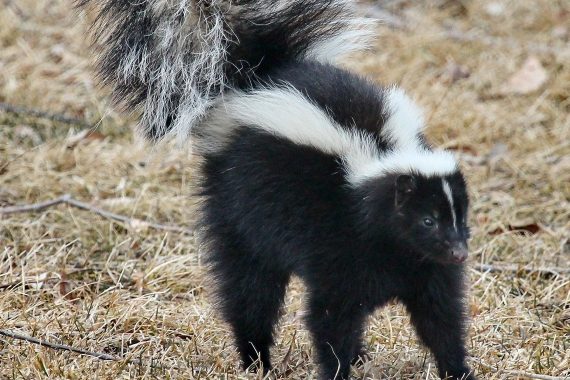 In Sun Tzu’s The Art of War, which was written in roughly 500 BC, it says that the ultimate expression of skill is not to win a thousand victories in a thousand battles, it is to defeat the enemy without fighting.

Many species of birds, mammals, reptiles and amphibians blend into their natural habitat in one way or another to escape notice, and that’s definitely a great survival plan. But I wish there was a word in English that means “the opposite of camouflage”. Skunks are telling you from a distance: I’m a skunk, and I’m well-armed, but I prefer peace. Don’t mess with me, and I won’t mess with you. If you mess with me, well, you’ve been warned. I’m going to ruin your day. Peace through strength.

Consequently, most animals leave skunks alone. Foxes, coyotes, hawks and raccoons rarely mess with them. Dogs have been co-dependent with humans for 30,000 years and have lost some of their natural wariness, but a smart dog that has the misfortune of tangling with a skunk tends not to make the same mistake twice. 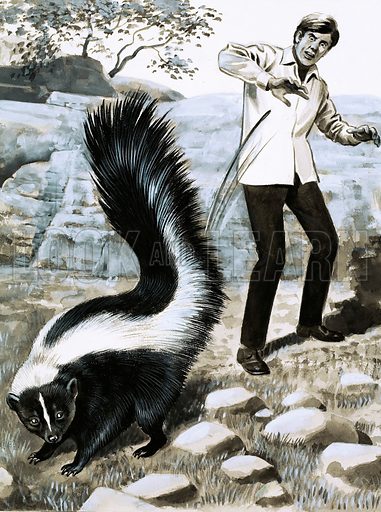 Skunks do have one natural predator, however, and that’s the great horned owl. But this comes at a cost: while immune to the stench, the owl runs a risk of being blinded by the spray, and a blinded owl that doesn’t recover quickly runs a risk of dying of starvation. Consequently, wildlife rehabbers sometimes take in great-horned owls that smell of skunk spray.

Just because the skunk has a striped black-and-white fur pattern that clearly says they’re not to be messed with, they don’t use this as an excuse to walk around like bullies, enforcing their way with others. They’re very reclusive, going about their nightly skunk business of foraging for food, and eating those yellow jacket wasps that vex us. They really, really don’t want to spray you, in fact they’ll go to great lengths to avoid it. If the striped pattern is not enough to keep you away, they’ll stamp their front feet very forcefully in warning and wait till the last moment before letting loose.

So the golden rule with skunks is, leave them alone, they’ll leave you alone. The key being “leave them alone”. Stay well away. There’s no need to engage with a skunk in any way, even if you see them during the day – which is not uncommon for a healthy skunk during breeding season, but even if the skunk is sick, again…”leave them alone” still applies.

If your dog does get sprayed, there are many recipes for countering skunk spray online, although the ones we recommend the most involve hydrogen peroxide, not tomato juice. If you have any questions, or if you see a skunk that you think is hurt or sick, do not hesitate to call the Philadelphia Metro Wildlife Center at 267-416-9453! We really dig skunks, we hope you do too.

About Rick Schubert 3 Articles
Rick Schubert is a Licensed Wildlife Rehabilitator and the Executive Director of the Philadelphia Metro Wildlife Center (PMWC). He has been a wildlife rehabilitator for over 20 years. PMWC is a non-profit, wildlife rehabilitation organization that is staffed by an experienced team that includes an assistant rehabilitator, an education director, two veterinarians and over 60 volunteers. The Center is located at 2815 Township Line Road, Norristown 19403. To get involved with PMWC or report injured wildlife, call 267-416-WILD (9453) or visit www.phillywildlife.org.

Fox on the Run

Repeated sightings of a fox in need have neighbors pitching in to help. [more…]