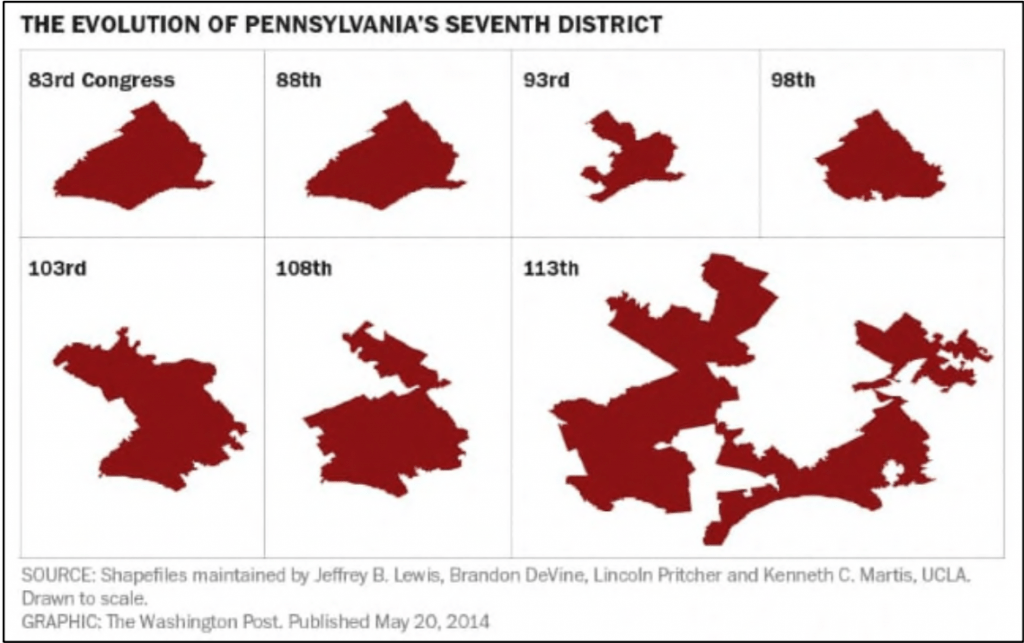 Crises loom everywhere during these turbulent times, so you would be forgiven if the issue of gerrymandering was far down on your list of priorities. But it should not be. In fact, it plays a significant role in how your state legislature and elected U.S. Representatives handle the myriad threats, upheavals, and opportunities we face right now.

As is currently the process in state senate, state representative and congressional redistricting, due to gerrymandering, our elected officials select their voters by redrawing the boundaries in a partisan manner.

Efforts have been made for decades to place the boundary line drawing process in the hands of an independent redistricting commission. Those efforts have never succeeded.

The people of Pennsylvania and some of its elected leaders have long known and lamented that Congressional redistricting is a partisan process. The bill to redraw these boundaries just needs to pass the PA General Assembly and be signed by the Governor; the same process used to rename a bridge. We should note that redrawing state legislative boundaries is done by a party-backed commission that would require a Constitutional amendment to change, the opportunity for which, at least in 2020, has already come and gone.

So in this age of polarization, it is noteworthy when a Republican from very conservative Blair County, and two Democrats from very liberal Philadelphia come together in a bipartisan way to tackle one aspect of gerrymandering.

We are doing so via HB2327, which establishes a new commission to redraw the Congressional maps. Many have indicated that past reform efforts have failed because there is not any legislative, administration, or agency input in the process. We set out to address these concerns and also create a redistricting commission that is led by citizens. Our bill balances these political realities with the need for independence to minimize partisanship.

How? First, the Secretary of State oversees an open application process where any interested and qualified Pennsylvanian can apply to be part of the commission. The qualifications are simple, you must:

• Be registered to vote
• Have voted in at least one of the last three statewide elections
• Not have switched parties recently, and
• Have been a resident of Pennsylvania for a minimum of three years.

(No lobbyists, elected or party officials, or their family members would be eligible.)

The application process will remain open until at least 60 Republican nominees, 60 Democrats, and 60 people who don’t identify with either party. The Secretary would then cull this list down to 120 (40 in each bucket) aiming to address diversity of geography, race, gender, and ethnicity.

This spirit of both public involvement, random selection, and party participation continues throughout the deliberations and actions of the Commission until the ultimate map is decided.

The work in crafting this legislation has been exhaustive and we have engaged our colleagues directly in the appeal to get buy-in and support, including holding exceedingly rare bi-partisan caucuses. Alas, the bill remains stuck in the House State Government Committee, along with other similarly well-intentioned redistricting bills with bi-partisan support.

Time is running out to do something about it. And if we do not act now, congressional redistricting will occur in the same partisan manner as always with the next opportunity for meaningful change to take effect in 2031.

Our last chance now with Congressional redistricting reform comes at a time of low confidence in our governing bodies, and rabid political polarization that stretches, to the breaking point, our ability to govern. And gerrymandering of political districts is a contributing factor (though not the only one) to both of those problems.

As our Legislative Session comes to an end, as our once-in-a-decade window closes to end Congressional gerrymandering, we have a chance to empower you to decide how best to elect our political leaders. This change will result in more citizens participating in the democratic process as individuals will have a direct voice in the contours of our democracy.

Let’s seize this moment and create a new political reality that breaks through the polarization of the present and provides the chance of political unification in the future.

Speak Up and Stay Informed
Thoughts? Suggestions? Concerns? Make your voice heard by calling (215) 482-8726 or emailing me at RepDeLissio@pahouse.net.