UPDATE October 2020:  Paul Gorka passed away October 12th at age 89. Here’s his obituary as published in the Philadelphia Inquirer (Oct 16):

PAUL GORKA 89, Artist, October 12, 2020 of Nanticoke and Philadelphia. Beloved husband of Christine (nee Clay), Loving father of Julie Gorka (Walt Robinson), Susan Wisch (David), Barbara Gorka (Chris Moore) and Janit Gorka. Loving brother of Alice Pawlowski (Joseph), the late Doris Bartuska (Anthony) and the late David Gorka (Ann). Also survived by 8 grandchildren and many nieces and nephews. Paul graduated from the University of Pennsylvania after serving as an army intelligence officer stationed in Germany during the Korean war. He then received a degree from the Pennsylvania Academy of Fine Arts where he was given the prestigious Speight and Cresson Awards. He continued his studies at the Art Students League of New York and dedicated his life to his art and his teaching. On Saturday, October 17th, a Funeral Mass will be held for Paul in the town where he grew up, at Saint Faustina Kowalska Parish, 520 S. Hanover Street, Nanticoke, PA 18634. Visitation (11 to 12) Mass 12 noon. In lieu of flowers, contributions can be made to the Schuylkill Center, 8480 Hagy’s Mill Road, Philadelphia, Pa 19128 www.schuylkillcenter.org McIlvaine Funeral Home 215-844-0211 mcilvainefuneralhomes.com
Original article published June 10, 2015 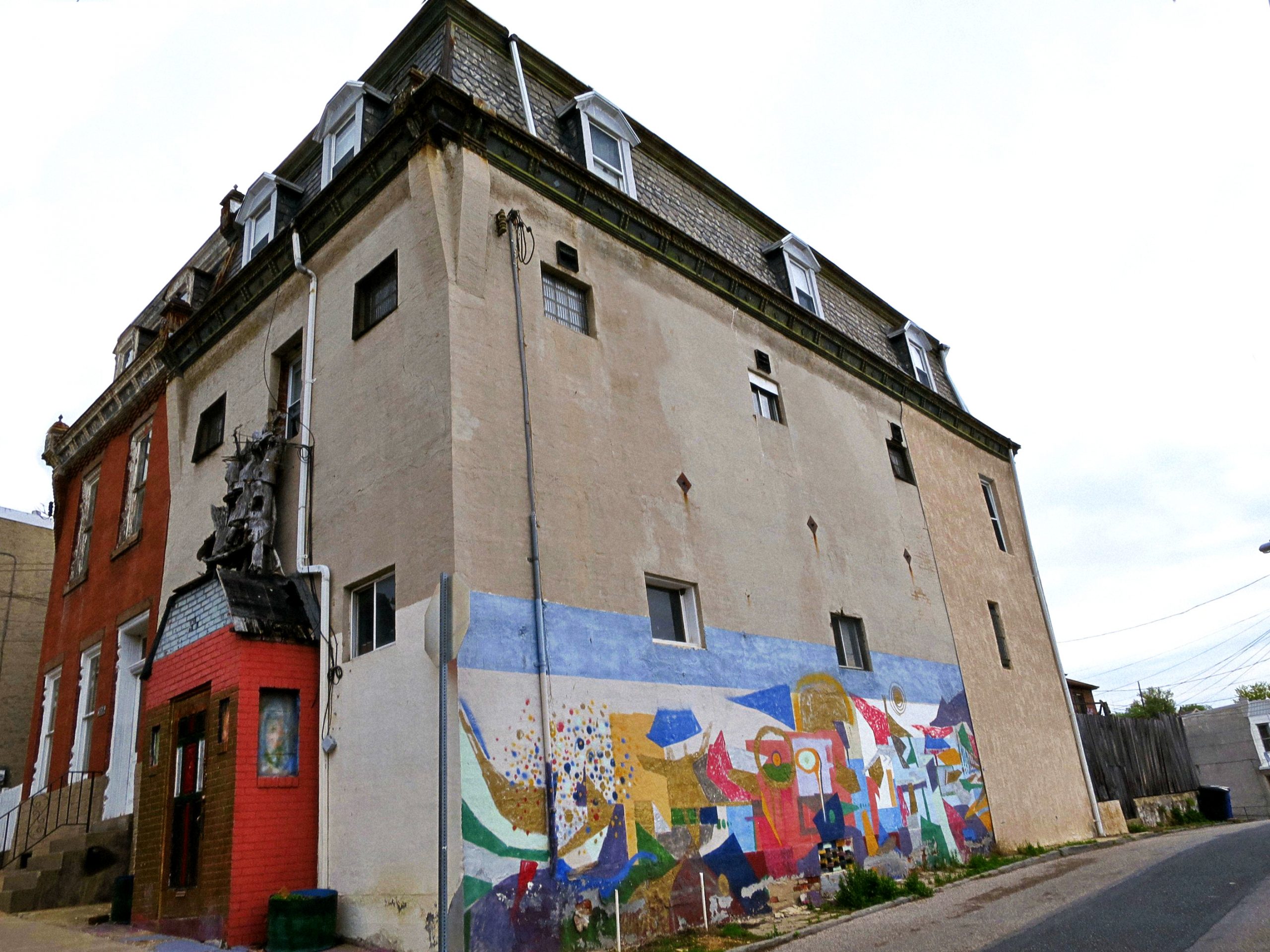 Ever wonder about this color-splashed rowhome on Stanton street?

The unusual paint job isn’t the only reason the structure stands out on the block: it’s actually an old VFW Post, the starting point for countless East Falls parades in times gone by — and a banquet hall for meetings and events of all kinds, over the years. From weddings to memorials, this old building has seen it all. 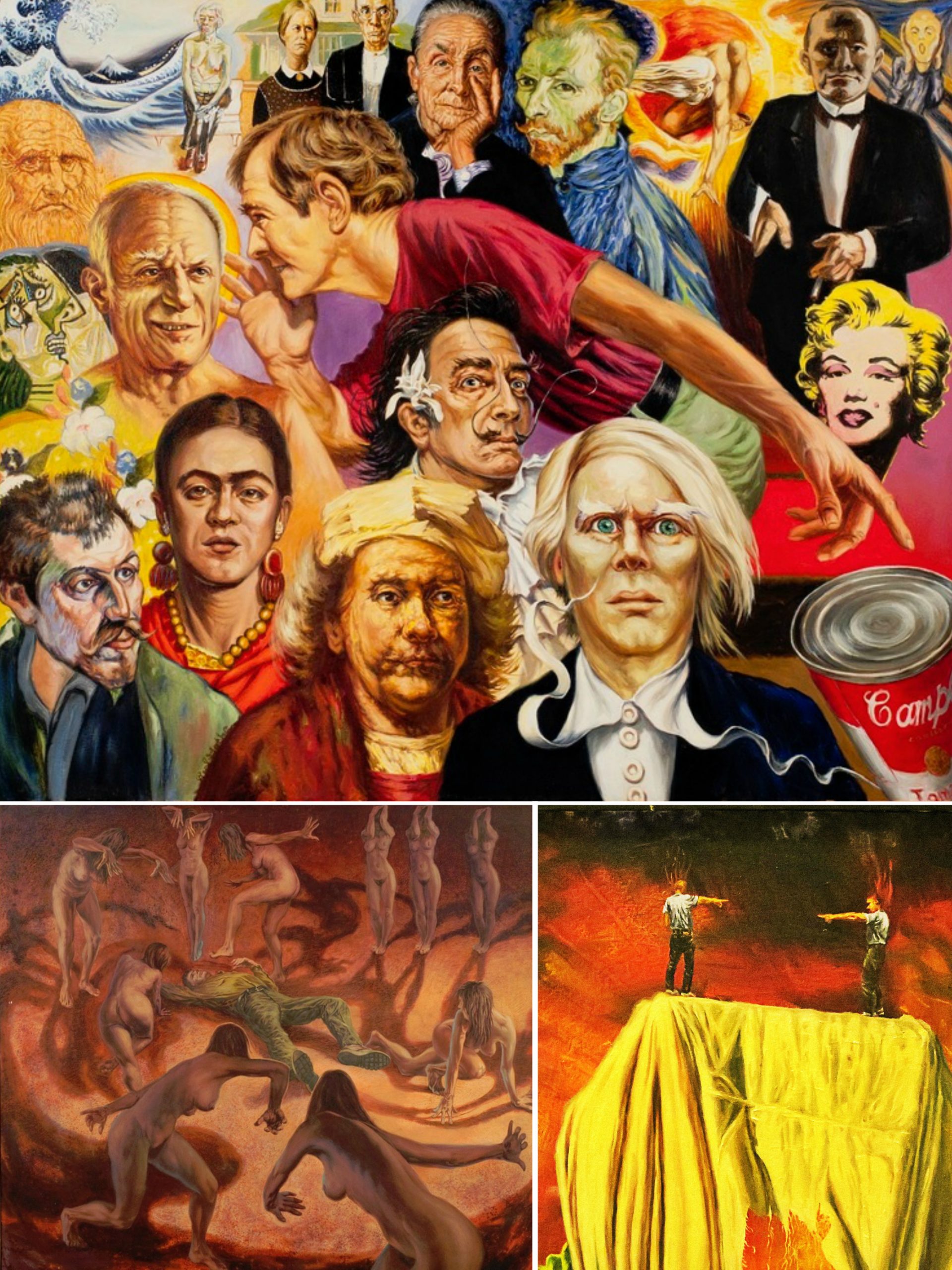 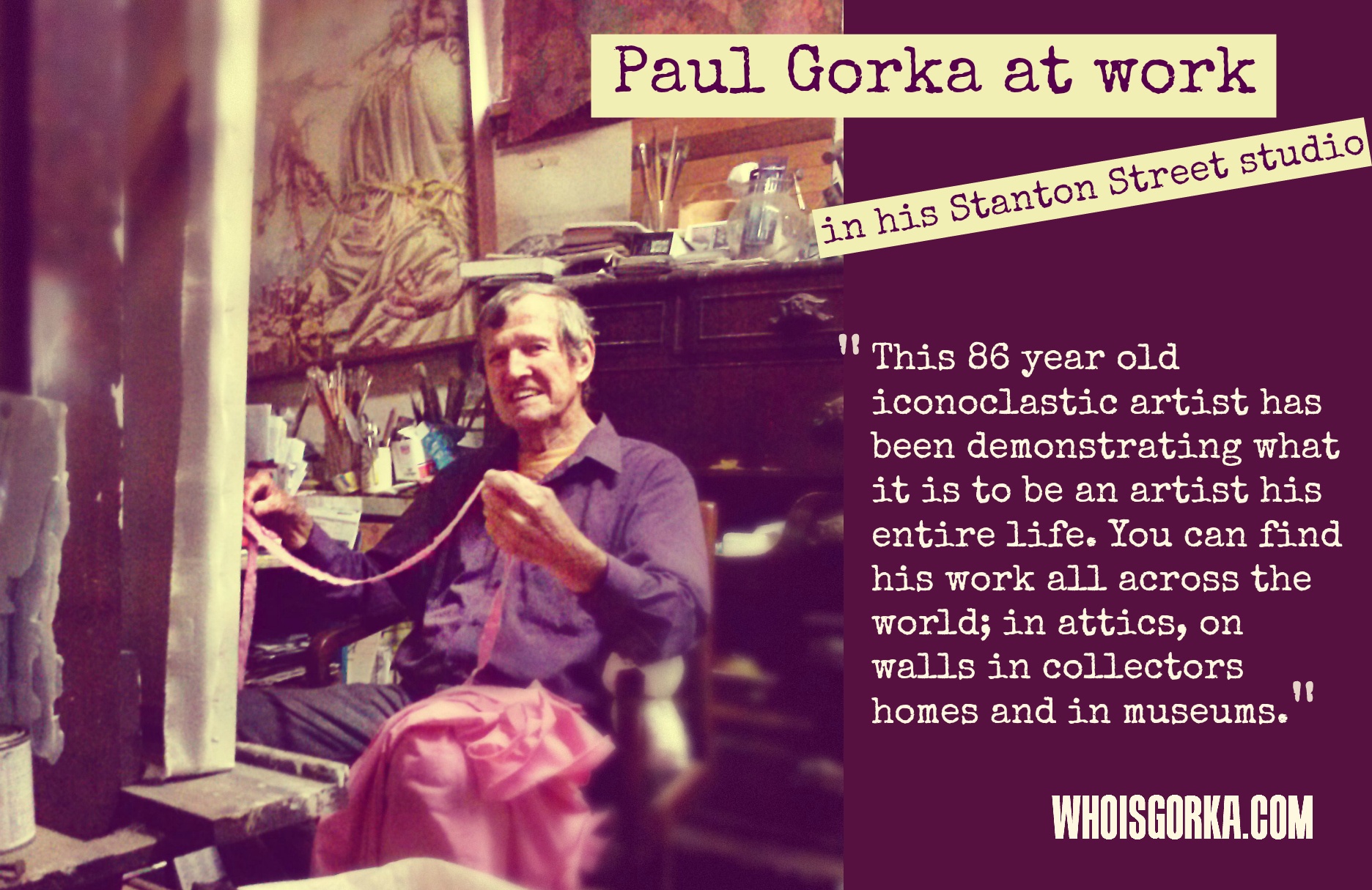 Paul’s a famous artist, quite different from the starving kind which he pretty much has never been cause he also happens to be a brilliant linguist and natural athlete. Who totally renovated the entire VFW post into a home, classroom & studio WITH HIS OWN HANDS. Also, he was a spy for the US Army.

I am not making this up.* An incredible artist is living right here in East Falls! And we ran into him, munching a ham sandwich the other day outside his studio.

Elaine at Murphy’s introduced us to him and his wife Christine awhile back — charming folks, regulars there. He’d noticed us walking our dog and called out from across the street:  “Aren’t you the paper guys?” 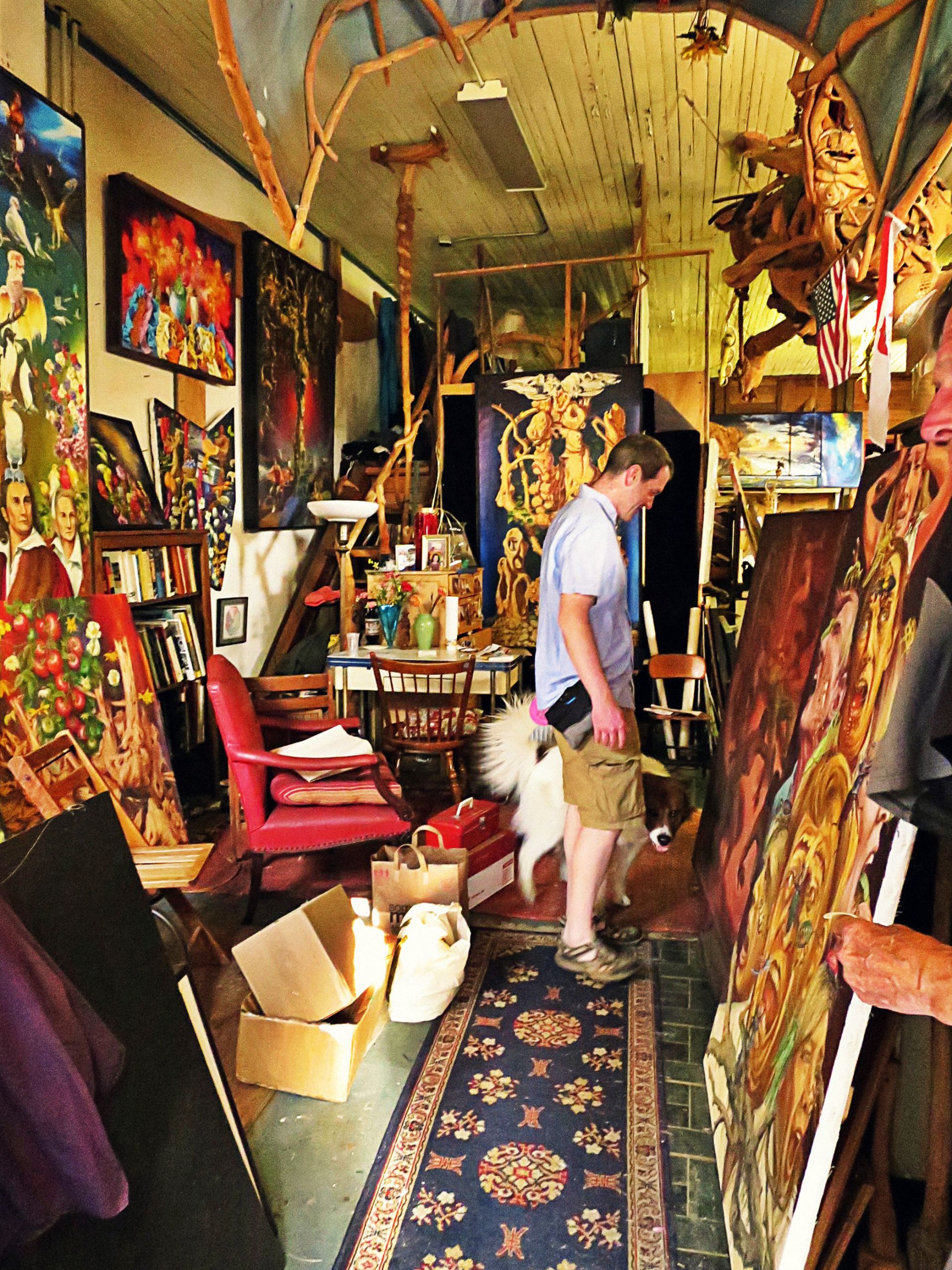 He invited us in, and showed us around a literal wonderland of art pieces, leaning & hanging on every square inch. I don’t throw words like “kaleidoscopic” around lightly, but that’s what it felt like for me, walking around under a towering ceiling, walls on all sides teeming with images making my brain do cartwheels in my head.

Paul’s work hangs in snooty-pants museums all over the world, so these pieces we’re tripping around WITH OUR DOG, mind you are, extremely valuable. 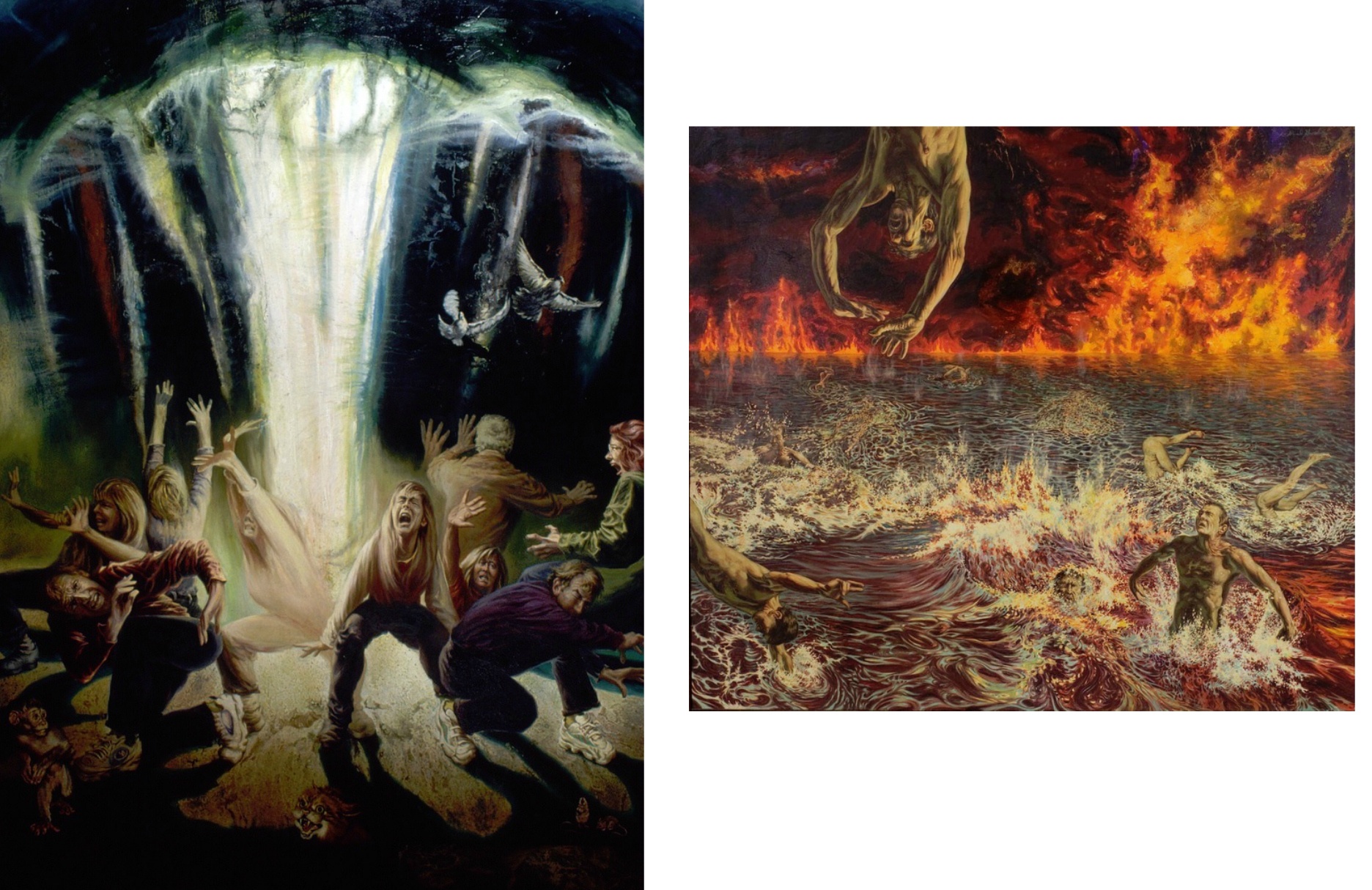 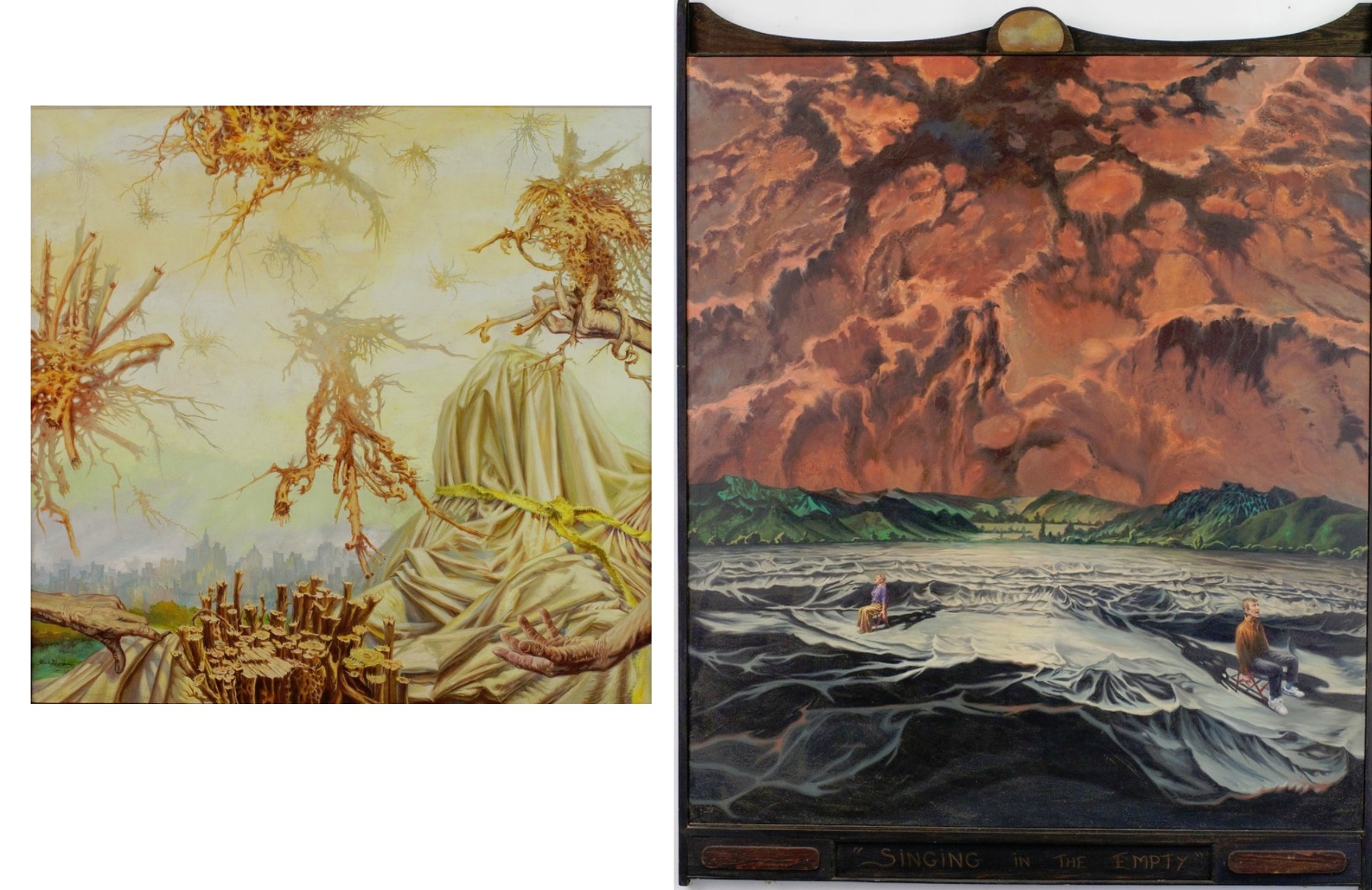 It was kinda like an episode of Hoarders, except instead of trash there was stunning art crammed into every nook & cranny.

The clutter looked more controlled when Paul showed us around his 2nd floor classroom/workshop, and then disappeared entirely when we followed him up to the amazing 3rd floor home he and Christine share.

Christine is a gifted artist and designer in her own right. Her paintings decorate the walls here, and Paul made a lot of the furniture (plus all of the frames for her artwork). 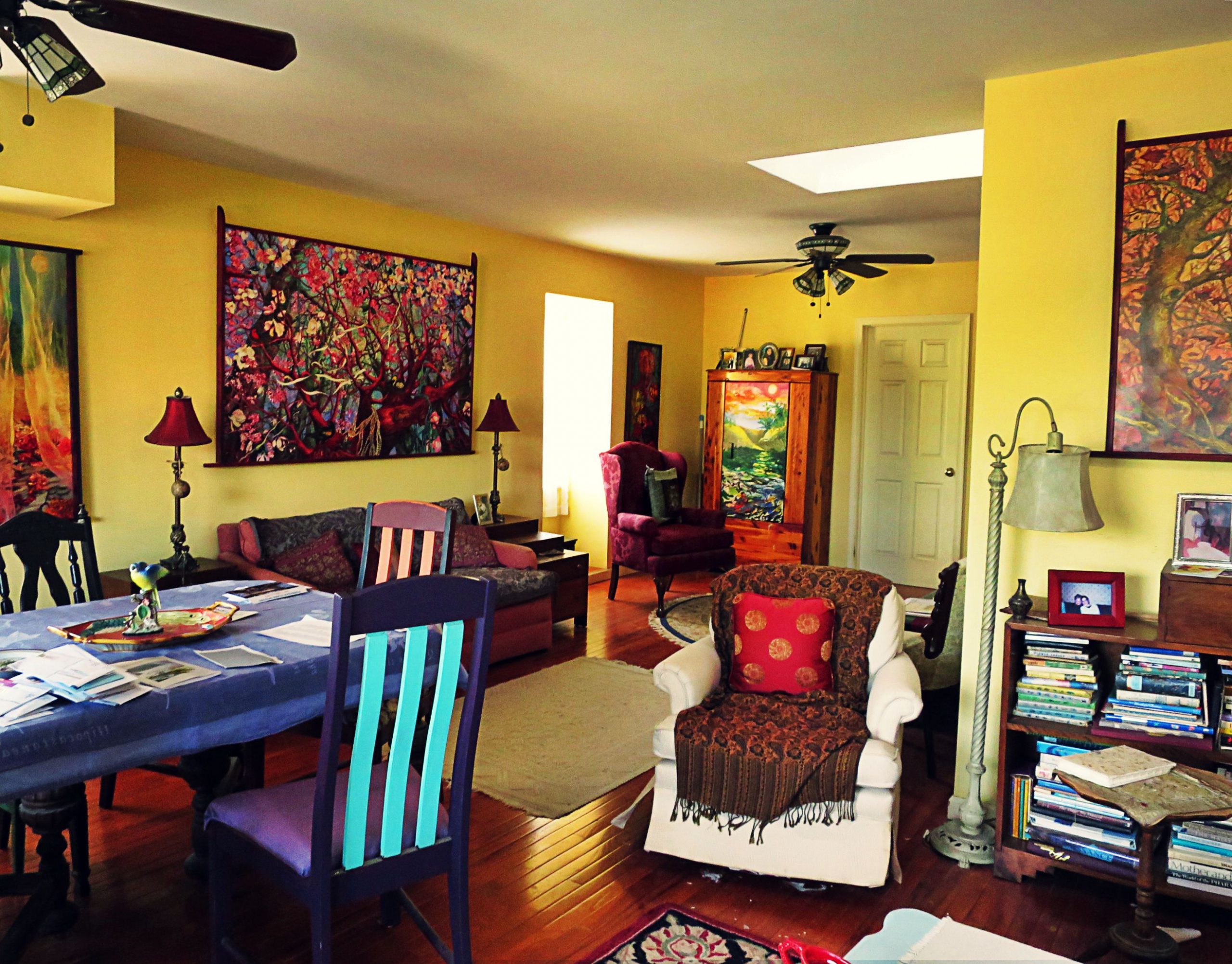 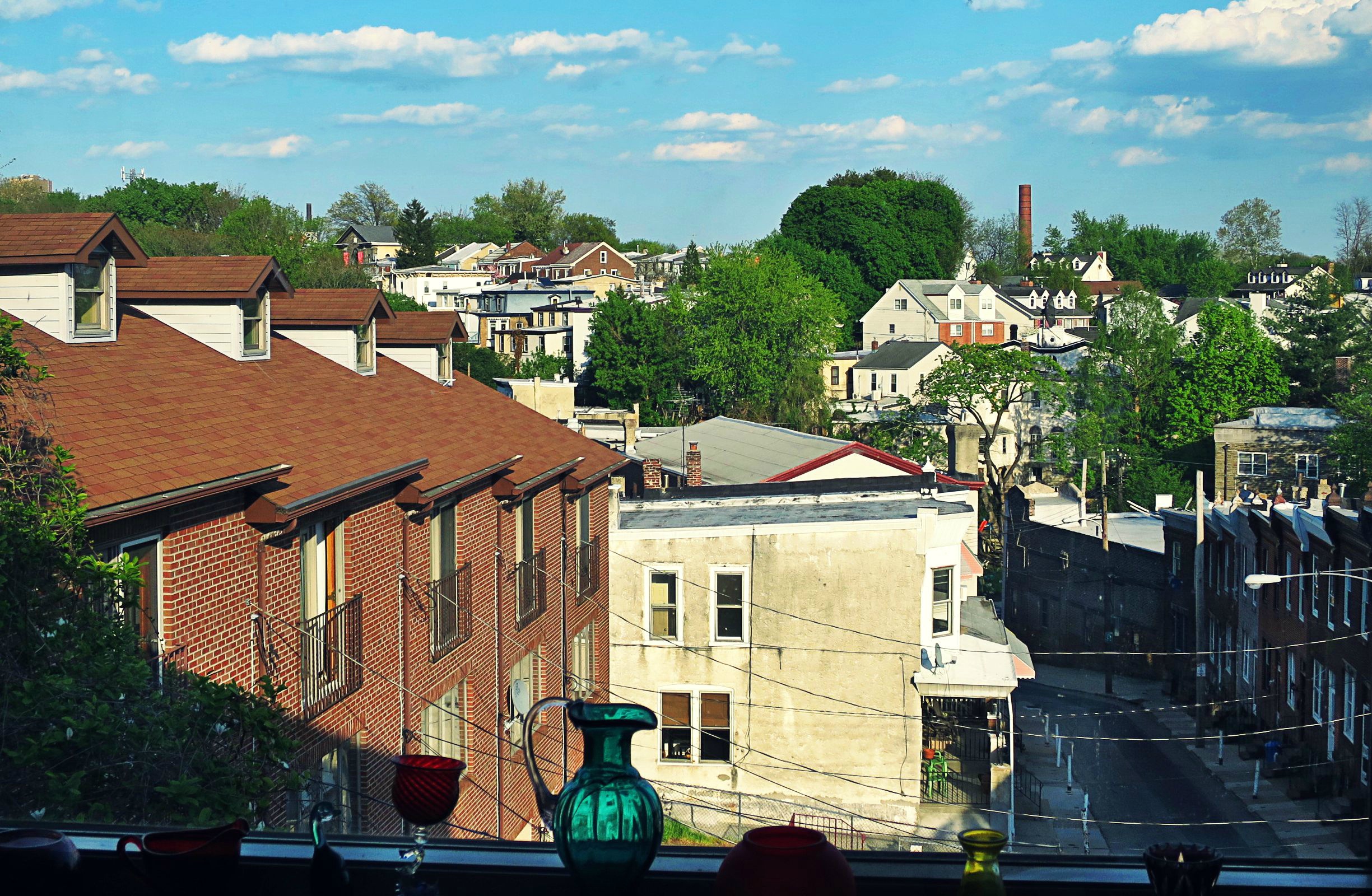 And their view! This third floor of the old hall overlooks the shorter houses on the street below. It’s all rooftops, mill stacks and church steeples —  how’s that for inspiring?

The Gorkas are both offering classes this Summer. Paul’s classes meet in his Stanton Street studio weekends, mostly ($30 per class).  Christine’s teaches classes too — call for more information:  215-848-1181.

*PAUL GORKA — In his own words…

I grew up in Nanticoke, Pa, a coal mining town in northeast Pennsylvania. It was completely devoid of art in every way. No art in schools, no art talk,  no classical music to be heard anywhere (except music lessons for twelve years-courtesy of my father, a great believer in everything he never had).  I showed an interest in drawing/painting from an early age but had little opportunity to exercise any possible talent I may have had  (i.e.  from 4th grade on I was the visual aids person for the entire school-arriving an hour or so early and wandering from class to class drawing maps, charts, etc).

High school was little different. I did backdrops for shows, edited the year book. No.1 in my class academically in grade school and no. 4 (out of 300) in high school.

I aced the SAT’s-was accepted at Harvard, Princeton and Penn. I knew nothing of the Ivy League, but 2 family acquaintances went to Penn so off I went to become a doctor, following my sister. Science and I didn’t get along (although my grades were fine), so I moved to Art History and degreed in it while taking courses at the Pennsylvania Academy of Fine Arts.

In the middle of my years at Penn, with the Korean war being waged, and feeling weak and undecided and diminished  (30% of my class were WWII vets and I started Penn at 17), I enlisted in the air force to bomb the bridges of Tokyo Ri with Bill Holden.

I passed all the tests and… Waiting for the next class at Reese AFB in Texas, a knock at the door of my parents’  house changed my life. This tall, robust Alan Ladd-type entered, said he needed people like me (who spoke, haltingly, a few languages) and could release me from my commitment to the Air Force if I went into Army Intelligence. It was the most rigorous training I have ever experienced. Only 7 out of 75 passed the course. Six months of German language, European history, listening to 300 hours of Hitler’s speeches. I was apparently a good agent and did a great job at keeping communism at bay. Incredible experience!

I returned to college — did incredibly well as a roaring lion. Went 4 years to the Art Students League of New York — did well — but leading me into illustration. Did well at that, TOO…but hated it… Left New York, returned to Pennsylvania Academy of Fine Arts! Won every prize offered and came out of the blocks running and have been running ever since.

I started as a grim Andrew Wyeth (and every painting sold) but quickly changed into into a fantasy realist– which I think I still am. I believe totally in content in art — art that deals with people on this planet. Aesthetics distantly second; content first, always.

Most art these days is based on aesthetics and the ART WORLD — not our real world– from world’s reality.

I’ve painted over 3000 paintings-won over 150 prizes, am in eleven museums across the country. I’ve had 2 retrospectives (Woodmere Art Museum, 1972 & Pennsylvania Academy of Fine Arts, 1982).

During 45 years of this time, I slept no more than 3-4 hours a day. Everything is and was so exciting.  I look in awe of them like someone else painted them. I love painting!

Physical activity has been a serene diversion much of my life – a lot of basketball growing up. I was a member of a European championship team in 1953,  fast-pitch softball on and off for 35 years (9 no-hitters, 21 one hitters),  and set age-group ultra-running records (beyond the marathon-24 hour-48 hour-6 day races). It is relaxing and calming.

It has all been very nice!!! A great ride and a wonder beyond all my expectations. 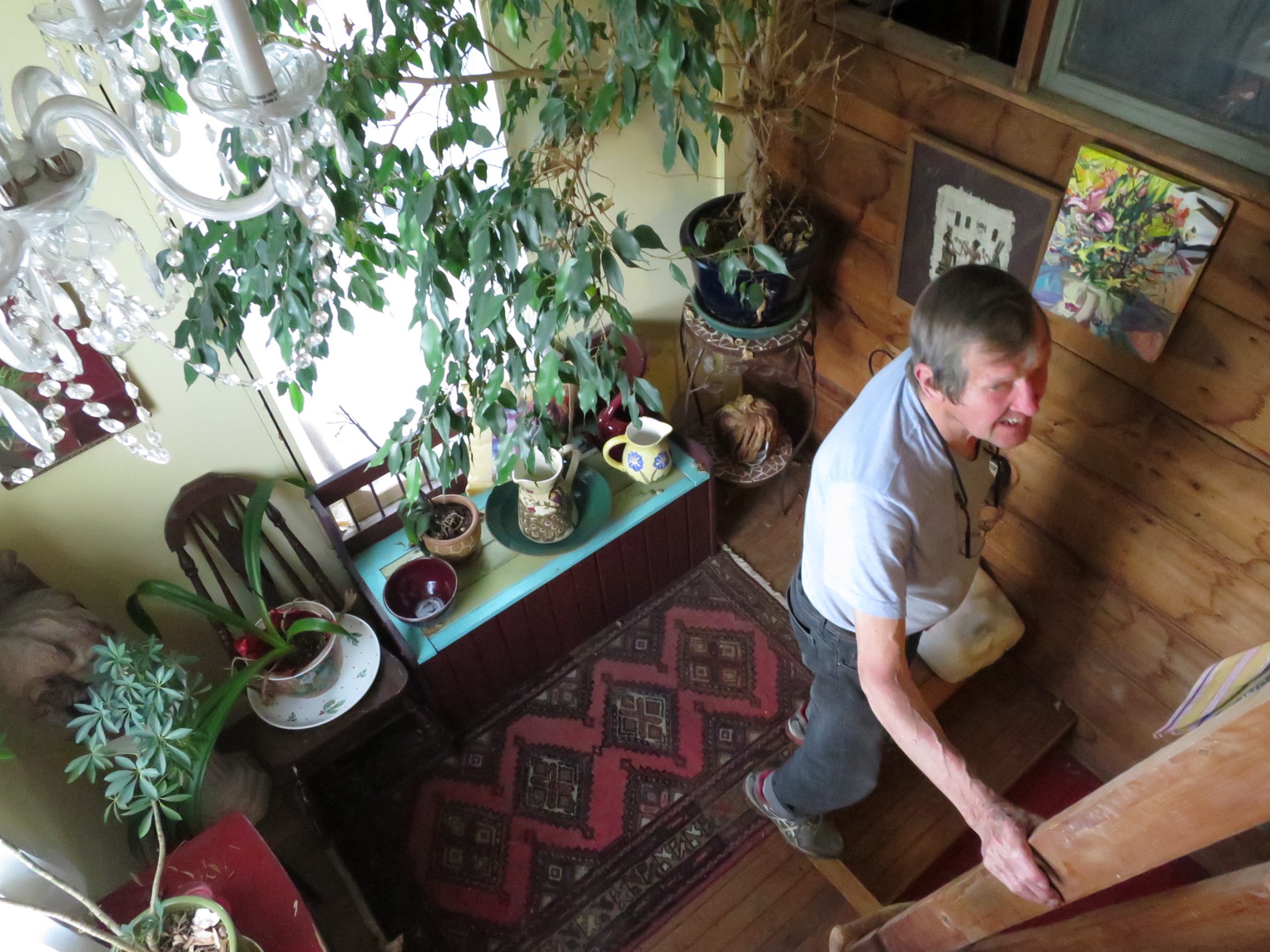