Philadelphia had a housing crisis before COVID-19, can you imagine how dire the situation is half a year into a global pandemic that’s devastated community resources and thoroughly tanked the economy? Thanks to two activist-driven encampments that organized this June, we don’t have to. They’re purposefully out in the open – just one tack in a many-pronged strategy that’s been making new gains for affordable housing.

Camps JTD and Teddy occupy prime real estate near the Art Museum and in a gentrifying lobe of North Philly, along Ridge Avenue. Both are big, sprawling tentscapes, alive with music, conversation and loud, colorful protest signs and banners. In contrast to the homeless encampments that have been popping up since the 2007 – 2008 Recession, these residents aren’t hiding in tunnels or under bridges. Camps JTD and Teddy refused to keep conveniently out of sight for their affluent neighbors.

In fact, they used their strategic locations to apply daily pressure in the surrounding communities, advocating for fair housing and social justice. “We had to disrupt the lives of the comfortable and privileged, we had to be an eyesore for those who refused to see the humanity of their fellow citizens,” said Jamaal Henderson of Act Up Philadelphia.

Jamaal pointed out that encampments like JTD and Teddy also provide many advantages for their inhabitants, including privacy and autonomy not usually found in shelters or homeless centers. And they’re more supportive. “Encampments give a sense of community to their residents, reduce the harm of homelessness, addiction, mental and physical health issues, make it possible for resource sharing,” Jamaal explained.

This is where Camps JTD’s and Teddy’s organizational framework took it to the next level. Not only could they provide the basics to their residents (tents, food, electrical access), but they added services like laundry, showers/toilets, medical care, COVID-19 testing, addiction counseling – even culture, education and training. “A whole host of services usually scattered throughout the city,” said Kyla Irizarry, a camp organizer and former student at Moore College of Art.

This in itself would have been revolutionary but the organizers of both camps understood that encampments – no matter how tight – were only a short-term fix for a vast and systemic problem. More than 5,700 Philadelphians are unhoused, 1,500 of those are children under 18. Tens of thousands of more households are teetering on the brink of eviction. More than a quarter of the City’s residents live below the poverty line. Real solutions are needed not now, but yesterday.

Housing activists have identified over a thousand vacant/blight properties that the Philadelphia Housing Authority may be currently sitting on (including some in Germantown). They charge the PHA is holding out to sell to Developers who will line the District Council member’s pockets. All the while, more than 40,000 Philadelphians wait on a housing list that hasn’t accepted a new applicant since 2013. 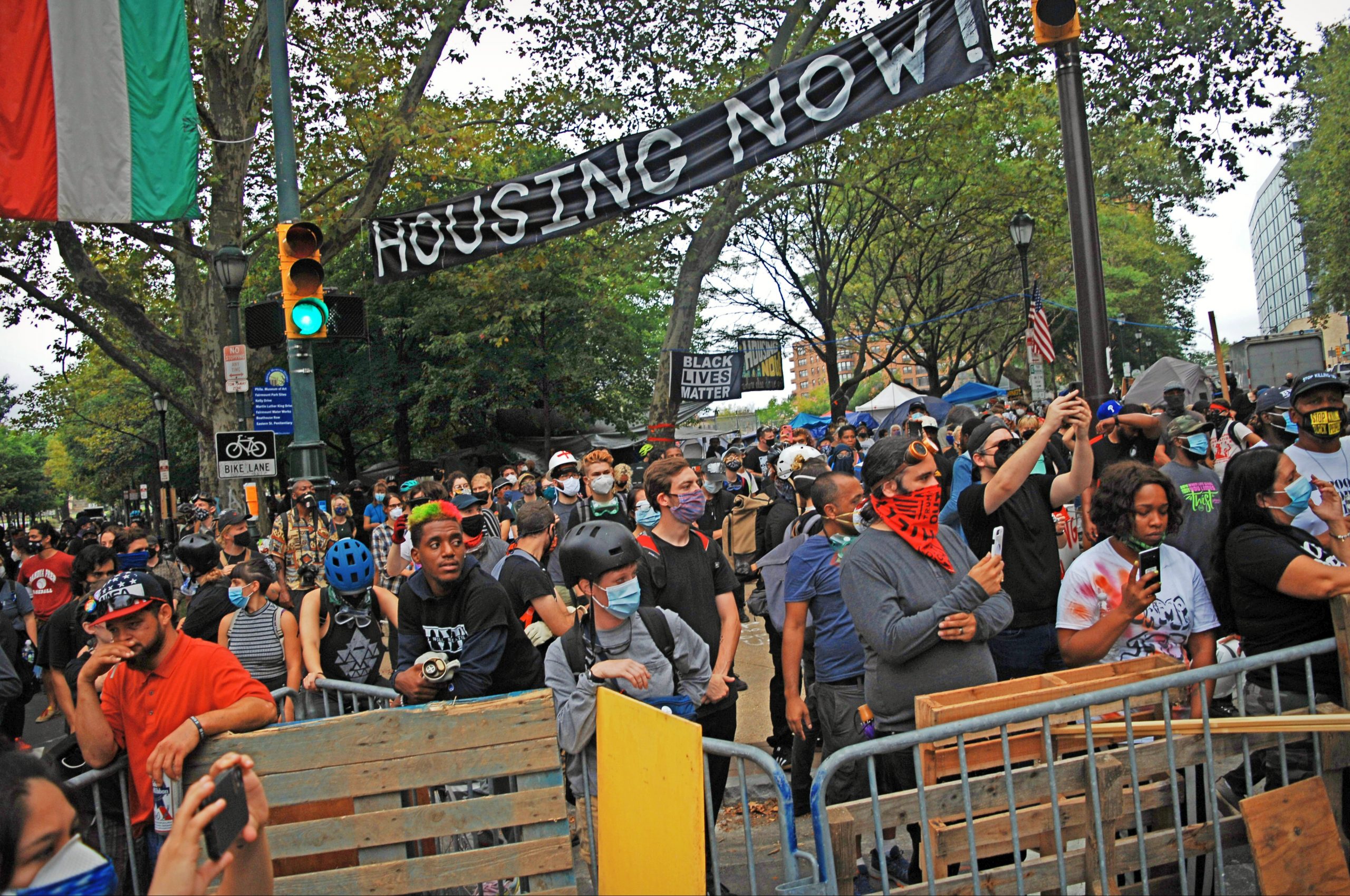 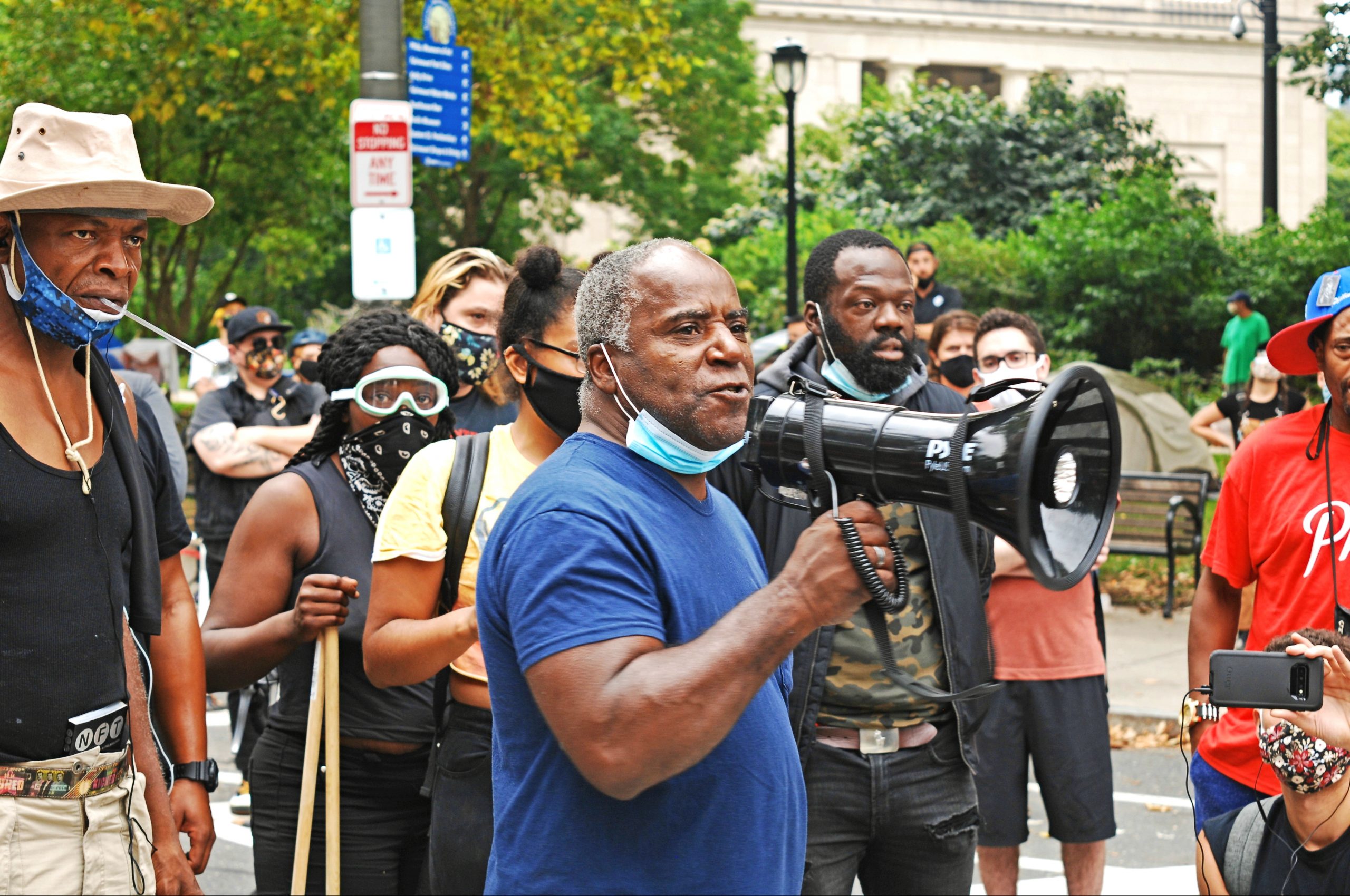 With this knowledge, Camps JTD and Teddy organized residents into action! They called out leaders on affordable housing but also on human rights, climate change, and racial inequity. They fostered alliances and organized takeovers. They welcomed everyone willing to fight for deep systemic change. They refused to budge when the City ordered the camps to disband this summer.

“We have to take over these houses to bring attention to the situation, “ said Eeg Stremist, a mother of 8 who took part in a recent housing movement. She’s seen how the PHA has let “5 to 10” vacant properties on a block go to blight, purposefully devaluing neighborhoods where families are desperate for affordable housing. “It’s a corrupt system that endangers the lives of our most vulnerable for profit,” she added.

After weeks of stand-off, the leaders of the largest self-organized housing takeover in the country earned their seat at the bargaining table with PHA and Mayor Kenney’s office. Finally, on September 25, they reached a deal to allow 50 mothers and their children to remain in 15 abandoned City-owned homes they’d been occupying. In addition, PHA agreed to turn over 35 more vacant properties to a community trust, to be repaired and used to provide safe, permanent housing to homeless residents in need.

“It’s a good start but it’s also not enough,” said Black and Brown Workers Cooperative organizer Sterling Johnson, noting Philadelphia’s affordable housing situation was already critical, and now advocates are bracing for a wave of mass evictions due to COVID. Thousands of new low-income units are needed, “but we feel that with this agreement we can at least get started moving people off the street and into homes before winter,” he said, “This is only the beginning.” 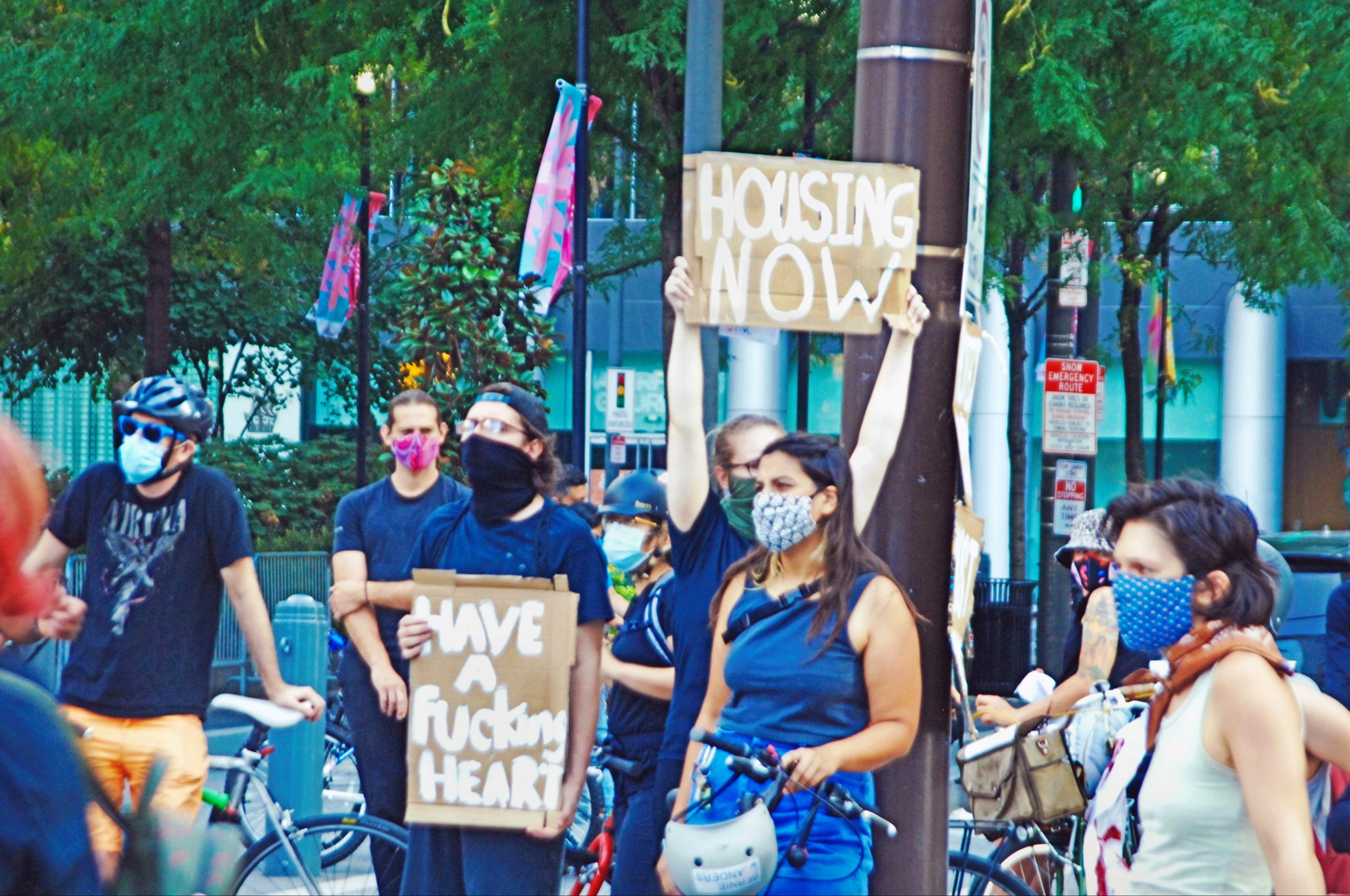 For Jennifer Bennetch, an organizer at Camp Teddy, this ruling is a historic victory. “Not only has a group of poor and homeless organizers managed through direct action to win an agreement that will set a precedent for the entire country, “ she said, “But we have also forced the City to exercise its power over the PHA!” Finally, public properties languishing for decades can be revitalized for the common good.

Act-Up’s Jamaal Henderson sees even bigger potential for lessons learned through Camp Teddy’s activism. “What we have done here is not so unique,” he explained, noting that organizers built on what worked for others in earlier movements. The communication and organization skills tapped to turn two homeless encampments into protest and activism hubs can be replicated in other parts of the City and, indeed, across the country. “It must be, in fact,” Jamaal said. “This was just one battle in a war for basic human rights and dignity. It’s not even close to over.”

The last of Camp Teddy’s residents moved out of the Ridge Avenue encampment on October 5, 2020, but Camp JTD and several other satellite camps remain and have grown in scale since the October agreement was reached. (Update 10/13: City officials announced that Camp JTD is scheduled to be “amicably” closed down by October 16.) 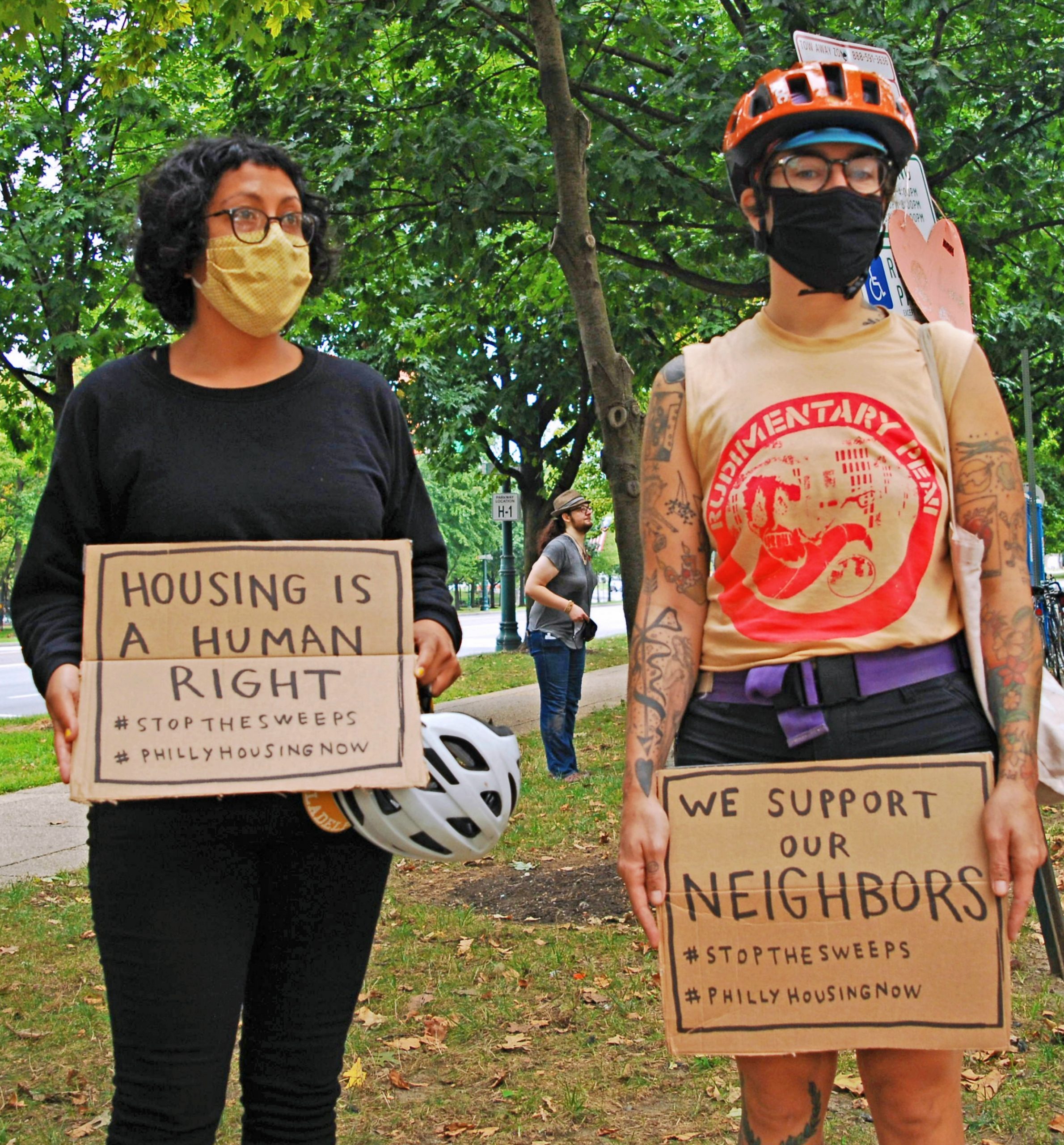 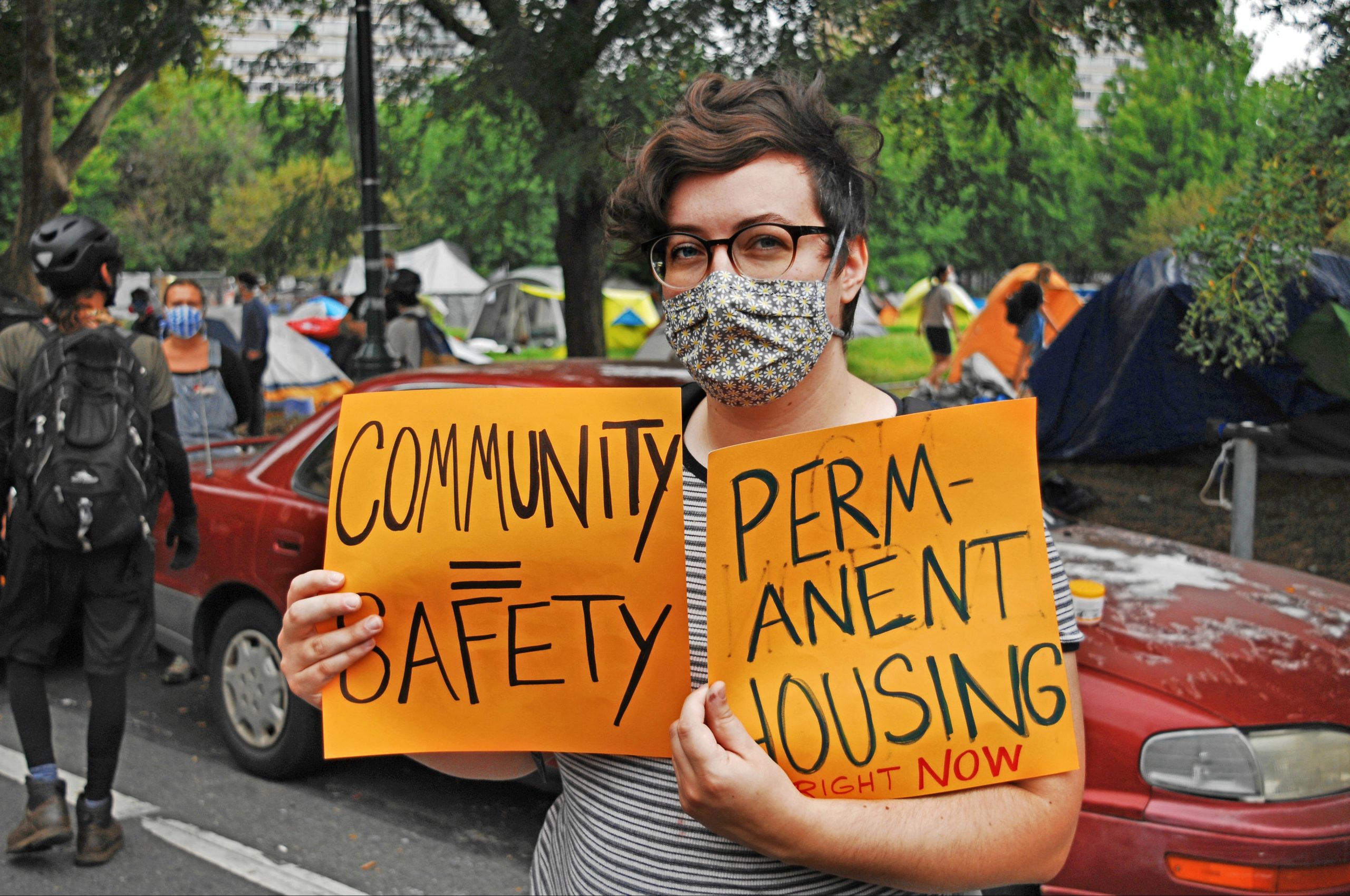 We are in a moment that has brought the human rights and economic issues of our day to the forefront. The pandemic has laid open all of the inequalities we have chosen to ignore for generations. We must not waste this opportunity to organize for our neighbors who may not look like us or have had the opportunities we have had.

Housing for all isn’t just the moral thing, it’s the economically advantageous thing for our community. Rehabbing blighted properties on our block and throughout our community would provide jobs to those struggling in our neighborhood. When these properties are cleaned up and rehabbed they can be put to use to house the vulnerable, provide services needed in the community, start businesses, or feed our neighbors.

We must set up encampments where they will have the most visibility and be prepared to defend and support them. We must organize within our neighborhoods to combat bad landlords, clean up, provide services to fill in the gap between resources and needs, or point our neighbors to resources already in place.

Pam Africa told me a simple truth a long time ago — “There is no savior but yourselves.” If we want a better world that prioritizes human needs over profits, we have to organize and do it ourselves. 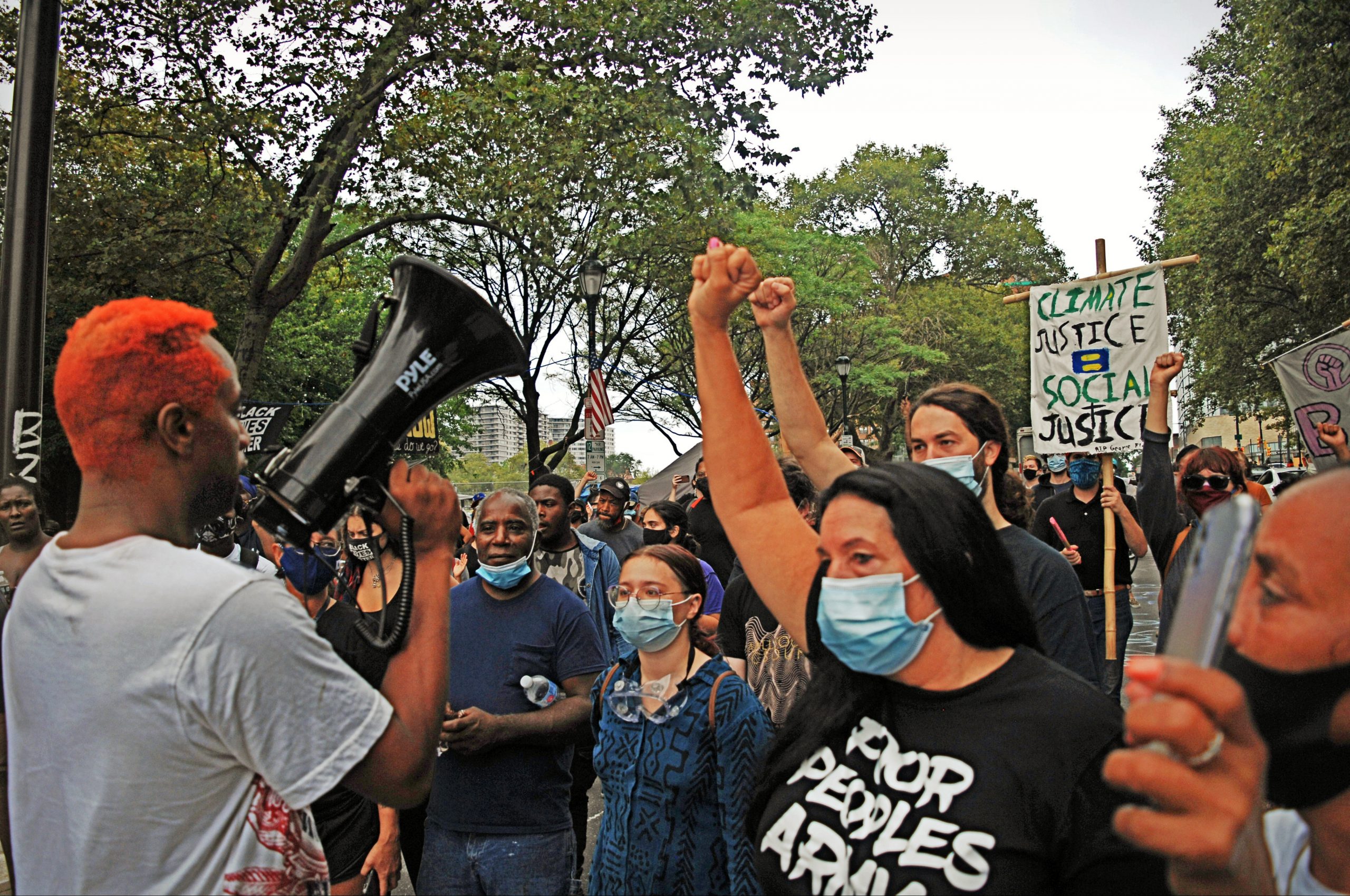 Step Up, Speak Out
Find out how you can lend a hand or add your voice to the call for justice. You can also donate to the cause (winter’s coming – hats, gloves, jackets and other clothing will always be gratefully accepted). The following links will give you plenty of other ways to step up for the cause:

Dive deeper: Please check out the source links in this post for more information about Philadelphia’s housing crisis.

Mañana’s giant red chili may be gone from our streetscape, but it lives on in the hearts of East Falls Flyers!  [more…]