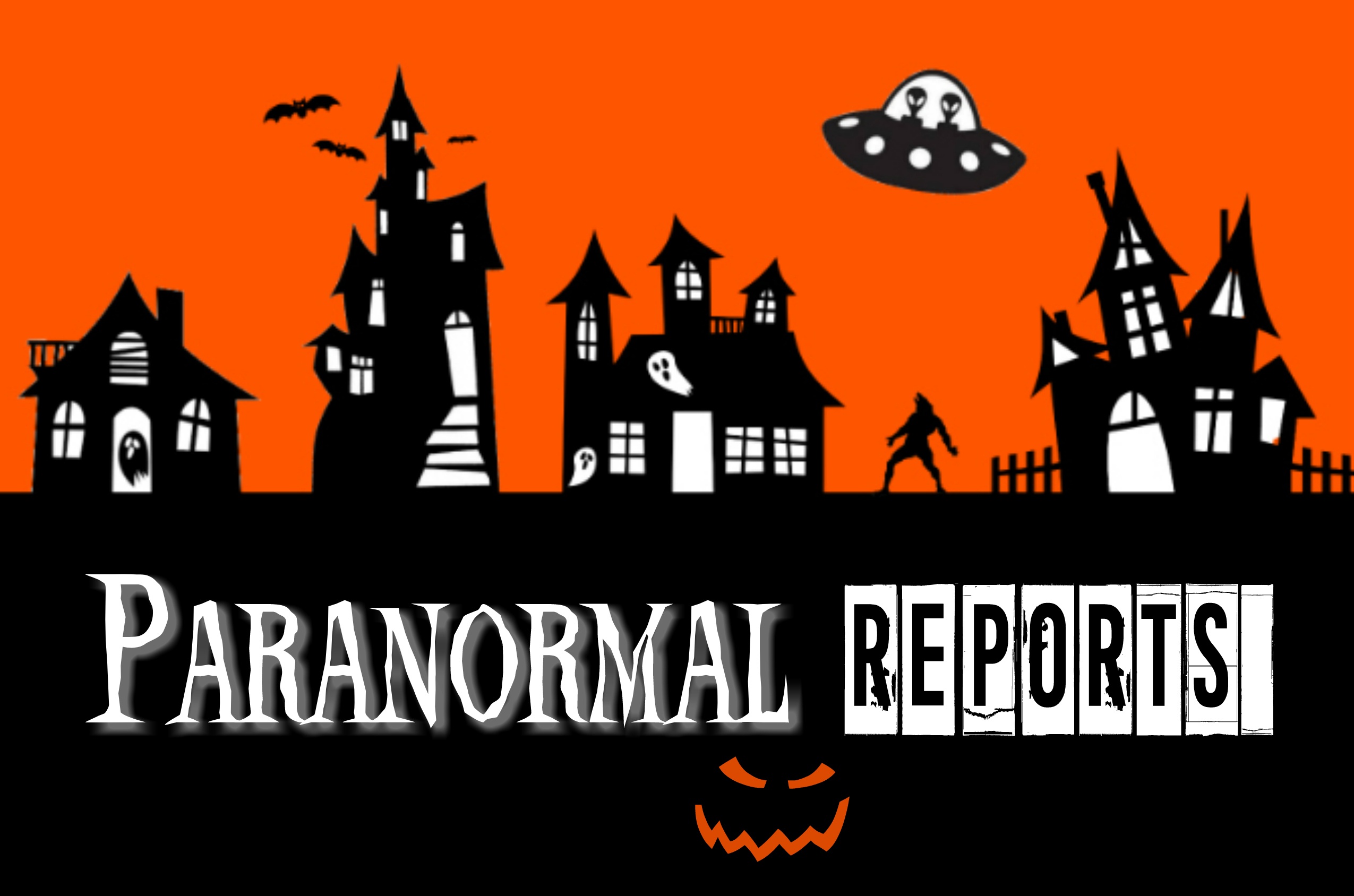 The following unexplained incidents have been reported in East Falls and Germantown.

All accounts have been verified using undiscovered evidence. Send corrections and additions to editor@nwlocalpaper.com.

Numerous and continuous reports have led local authorities to announce the disquieting return of the Shadow People (aka “Grey Guys”) to area parks, gardens and public restrooms. They appear almost exclusively at night, typically accompanied by an atmospheric chill and the smell of wet gym socks. Witnesses report feeling surrounded by inaudible whispers that grow more insistent as dark, semi-transparent humanoid forms flicker on the periphery of their vision. In some cases, witnesses felt the need to defend themselves against “energy” that seemed to want to choke or inhabit them. Officials urge residents to ignore them, as they’re just seeking attention.

Researchers from University of Penn’s Paranormal Department, in collaboration with the UPenn Music Department, published a 5 year comprehensive study today proving what we experience as the Schuylkill River is an intelligent, conscious entity.

The study, led by Ethnomusicologist Johan Eldersneivel, involved painstakingly mapping the sounds of the river and translating them into recorded music. A second “song” was composed with added improvisations, then played back to the river which was then recorded and mapped again. Astonishingly, the river mimicked the exact improvisations and furthermore created its own new improvisations.

Researchers are divided on what to call this lifeform; the published paper refers to it as “The Spirit of the River” but Dr. Eldersneivel has motioned for the name “Stacy” (after his mother).

Additional funding is desperately needed to continue this ground-breaking project. Gold-level donors (and up!) receive a FREE DOWNLOAD of these haunting and revealing melodies exchanged between human and aqueous beings for the first time in our history. Click through here for a free commemorative beer koozie. 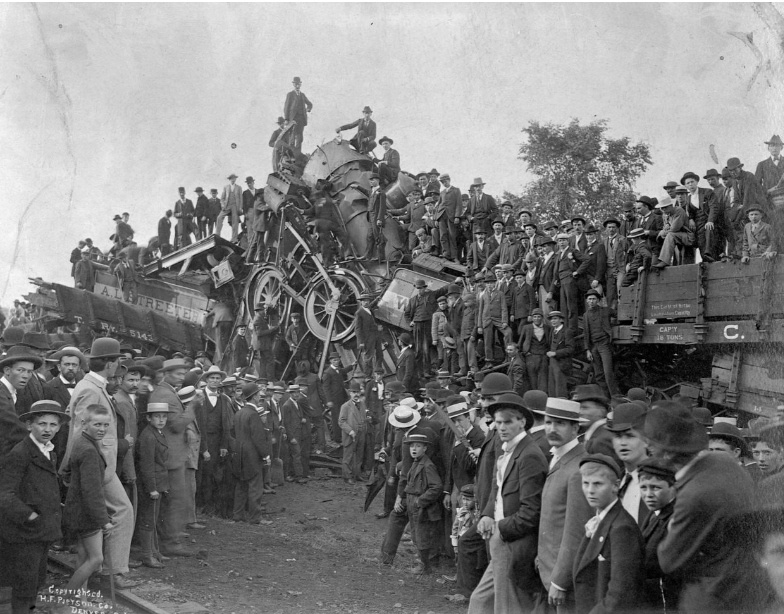 A phantasmal crowd of thousands in period clothing winked briefly into vision throughout “The Mills” section of East Falls, as above them a tragic coal train accident from 1887 played out in the gloomy darkness.

The wreck of Engine No 154 happened in the wee hours of the morning, when Engineer Patrick McGarvin misjudged a calculation and had to jump for his life as the engine and 19 cars toppled from the stone bridge into a mangled smoking pyramid on the street. Men and women flew to the streets in their night clothes, thinking it was an earthquake.

This devastating event burned into the fabric of time at this location. When conditions are right, the train appears, the crowd gathers, the psychic drama unfolds once more. Foggy fall nights with no moon are best. It always starts with a long, hollow whistle and an immediate flush of goosebumps. Look away if you’re easily scared (sometimes the passengers are skeletons). 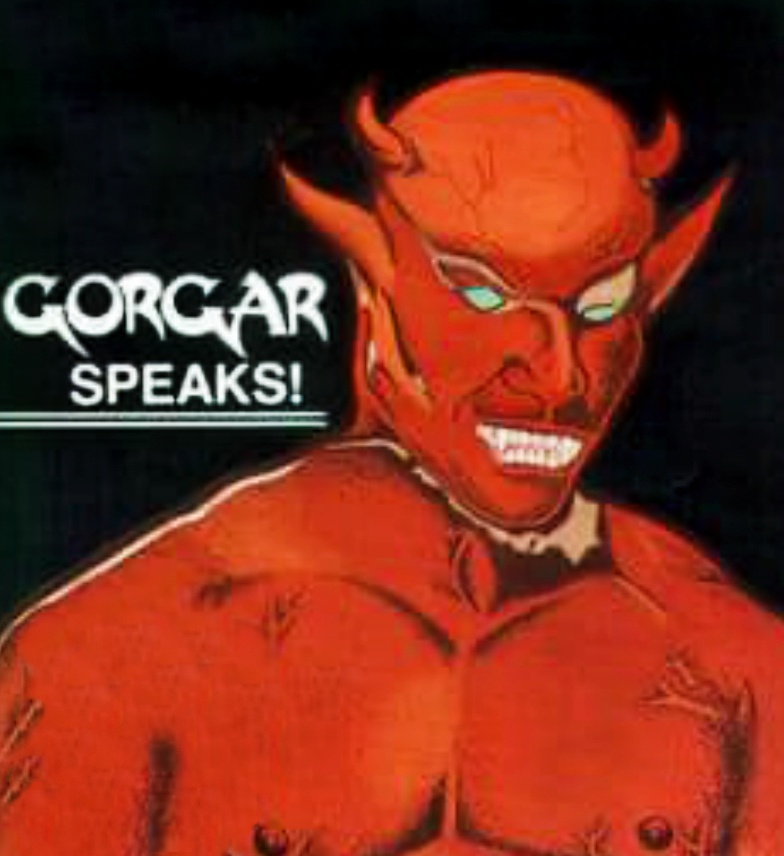 Gorgar Speaks: Me, Gorgar. Me Live. My words are for you. Me let you down. Where is Gorgar? Why he not make like storm through streets this time? Big storm in streets already! Why Gorgar fear? Gorgar strong!!! But Gorgar no see this sick before. Gorgar play safe.  See you next time. Sorry.

May 31, 2020
Message from Beyond
To: NW Philadelphia neighbors & commuters
From: “Sarah” (from the crossroads of Lincoln & Gypsy)

I am breaking protocol here. But what the hell. Yes, I’m the ghost that’s been appearing in random rear-view mirrors these last six months. You might as well get used to it, I’m not going anywhere. I spent the last 40 years learning to conjure that translucent face, and I’m quite proud of it thank you.

Put yourself in my shoes. I was 27 years old, I had a boyfriend, a job, a car. A dog! I loved life. One day, I remember it had been really rainy, the Drive was a mess, and somehow no matter which way I turned the steering wheel, I was flying downstream toward the waterfalls. The next thing I remember, I was walking home in a wet dress. Right down the middle of Ridge. All the cars were driving through me and I’m like “Oh that’s great I’m dead.”

I won’t lie, I was pissed off at the time and frankly I still am – but not at you! But I wasn’t done with my life and I feel cheated from the afterlife I was promised. Is this all there is? I don’t know. I’m trying to figure it out. I don’t mean you any harm. That’s the reason for this message, btw: to introduce myself so you don’t freak out if you see me.  I’m just like you but only half here. Just looking for directions.  I’ll see you soon. ~Sarah 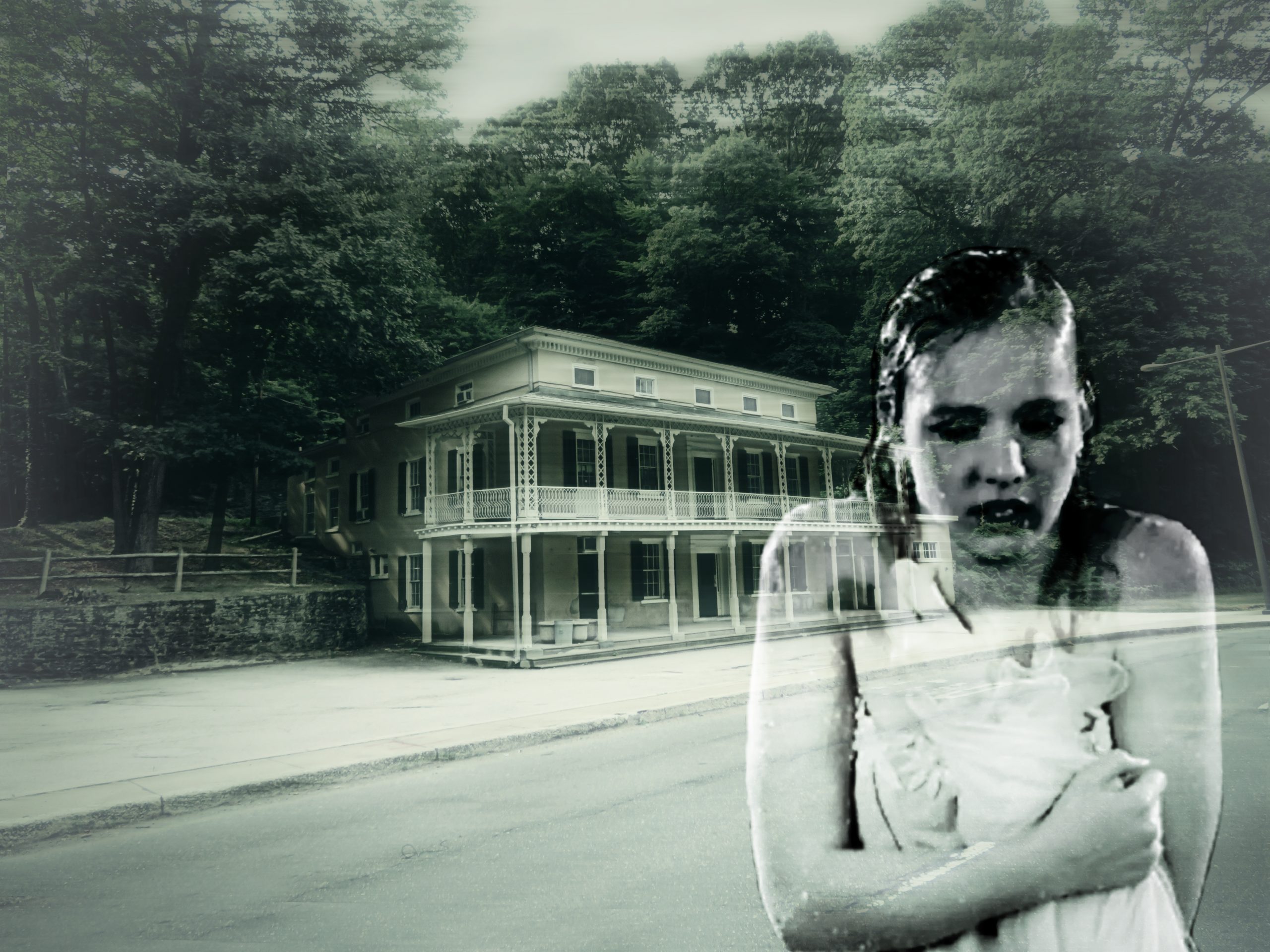 In a phenomenon that occurs once in a dozen lifetimes, a recent fissure in the space/time continuum has manifested an inter-dimensional life force scientifically known as a “Land Squid” due to its large head and the way it appears to “swim” though the air via “tentacles” of electricity.

The Land Squid is strictly a warm-weather creature that feeds on the residue of sadness and desperation typically found around struggling businesses and neighborhood watering holes. Although Land Squids can cause their own agitation for consumption, in this area they tend to merely amplify negativity already present. (They’re also shameless gossips.)

Climate change may extend the season for Land Squid infestations, and increase their likelihood in the future. Although Land Squids are not considered especially harmful to humans, their appearance indicates a quantum shift that could open the door for other more virulent pests such as Land Sharks, Nose Beetles and Lanternflies.  For more information contact paranormalreports@nwlocalpaper.com

The black water was calm as glass, the moon above hung low and bright. A soft breeze kicked up out of nowhere as the Ghost Bridge shimmered into focus out of thin air. Just as it does every July 10th, at “Smith’s Steps” on the Schuylkill. Just as Thomas Mifflin described in his bizarre rambling oracle from 1790 (unpublished and largely dismissed in scholarly circles).

Thanks to social media, more than two dozen witnesses gathered to cross the river and pose for photos on the phantom architecture, describing it as a “surreal” and “magical” experience. For Bobbie S. of Coulter Street, the short trip was life-changing, “We were so high up, we could’ve died but there was no fear, it was so beautiful,” he said, weeping.

By 12:30am, the Ghost Bridge was starting to fade and within the hour it had disappeared entirely. Officials warn the Ghost Bridge has not been inspected or certified safe by any authority.  PennDOT has deemed crossing the Ghost Bridge a “HIGH RISK” activity for cyclists and pedestrians and “COMPLETELY STUPID” for motor vehicles of any kind.

Follow @MifflinsGhostBridge for updates on its next predicted appearance. 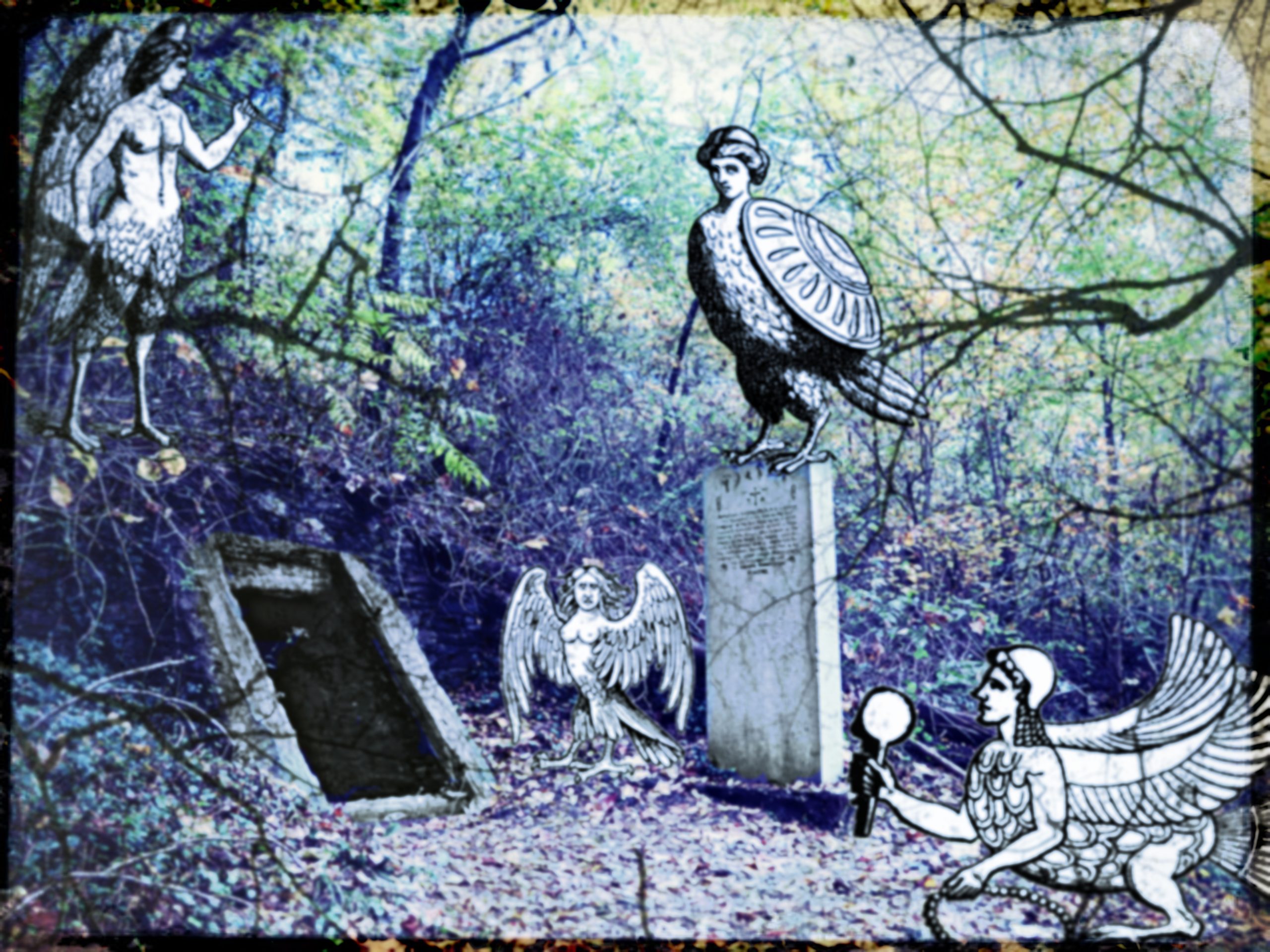 A gathering of Harpies dating to the Roman era was spotted at the Hermit’s Cave by two foreign exchange students from Malaysia and their 63 year old chaperone/interpreter (names withheld). The women were hiking later than they intended, having gotten lost for approx. 45 minutes earlier in their walk.

It was dark as they approached the Hermit’s Cave and noticed what looked like firelight thru the trees. Investigating further, they discovered “at least ten” winged, birdlike creatures gathered inside the historic structure that has been a vortex for paranormal activity since Colonial Times, when the mystic Johannes Kelpius and his followers practiced Doomsday rituals here.

“I saw their claw feet and human female heads and knew immediately they were harpies,” one witness explained. Using hand signs and facial expressions, the students described the Harpies’ voices as “demonic screeching.”  Despite their fearsome appearance, the Harpies paid no mind to the human interlopers and carried on with their planned rituals, which turned out to be some sort of baby shower.

August 4, 2020
11:30am
Calumet Street
Homeowner and amateur contractor Theresa Bizwack accidentally released a family of autonomous troglodytes* from the hidden comfort and safety of their subterranean lodge. In a move intended to save prep time for a small addition, Bizwack detonated an “unused” retaining wall behind her house, exposing the pallid, half-blind cave dwellers to human detection, as well as UV/UBV radiation and the coronavirus. All of which can be deadly for these peaceful, sedentary clans who have co-existed with us for centuries.

“That was a much bigger blast than I expected,” she admitted to The Local, adding that she tends to “err on the side of bigger,” when it comes to explosives, since acquiring them used to be a hassle in PA. “I feel just awful now,” she said, “Those poor people or whatever they are. I’ve never seen such blinking.”

By the time we interviewed Bizwack, she had canopied the crater with a tarp, and was working on replacing the wall quickly with cement and cinderblocks. The City urges neighbors to obtain the proper permits before attempting any new construction on your home, and to call 811 before digging or blowing up significant portions of your property.

*do NOT confuse gentle troglodytes with sewer raiders, who also inhabit local underground caves but are drifters (and considered pests) 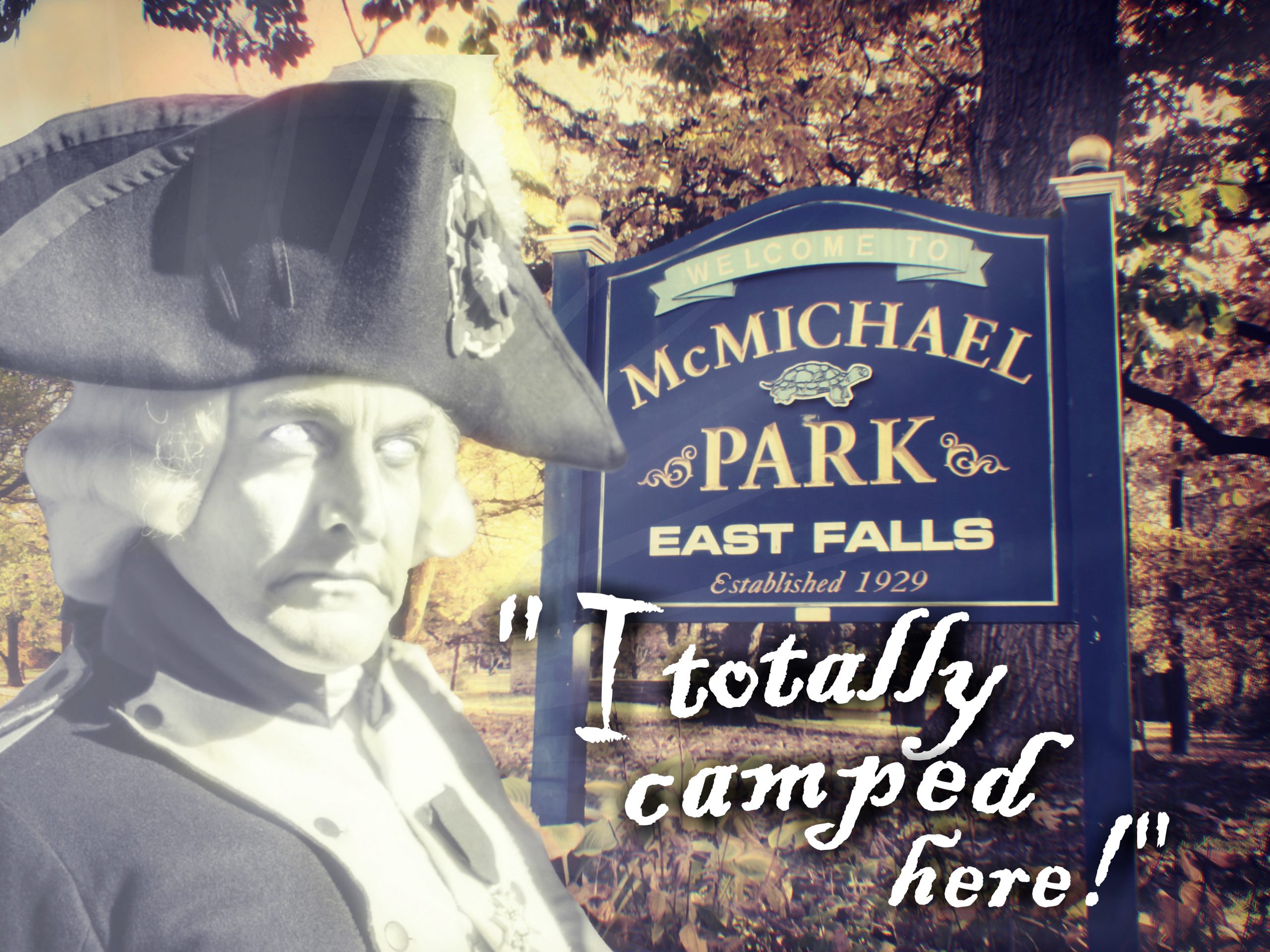 Sept 8 – 23, 2020
10:30 – 11pm
McMichael Park
Terrified neighbors report disturbing encounters with an entity claiming to be The Ghost of Lafayette, a French aristocrat and military general rumored to have encamped here with the Continental Army in the summer of 1777.

The specter has been heard wailing in the night, bemoaning the disturbance of his “emerald gem” and cursing the ground where construction has begun on a new natural playspace. Park visitors have also spotted an eerie presence lurking around the War Memorial.

“I only got a glimpse but I’d say it almost looked like a middle aged woman in a tri-cornered hat,” said <name redacted>, on Penn Street. However, she and her partner did add the entity’s “unearthly illumination” felt authentic. “Either that or it was glowsticks,” they said.

Hey it’s Clarissa, a few weeks ago my boyfriend got bit by a dog or something on his way home from work (he bartends in the neighborhood) and since the moon started waxing, he’s been acting weird. I remember you posted those signs of demonic possession and was wondering if you have anything for werewolves. Jeremy’s not answering his phone and I feel like this pile of shredded clothing in the bathroom is probably a clue. I’m extra worried cause he’s super allergic to dander. 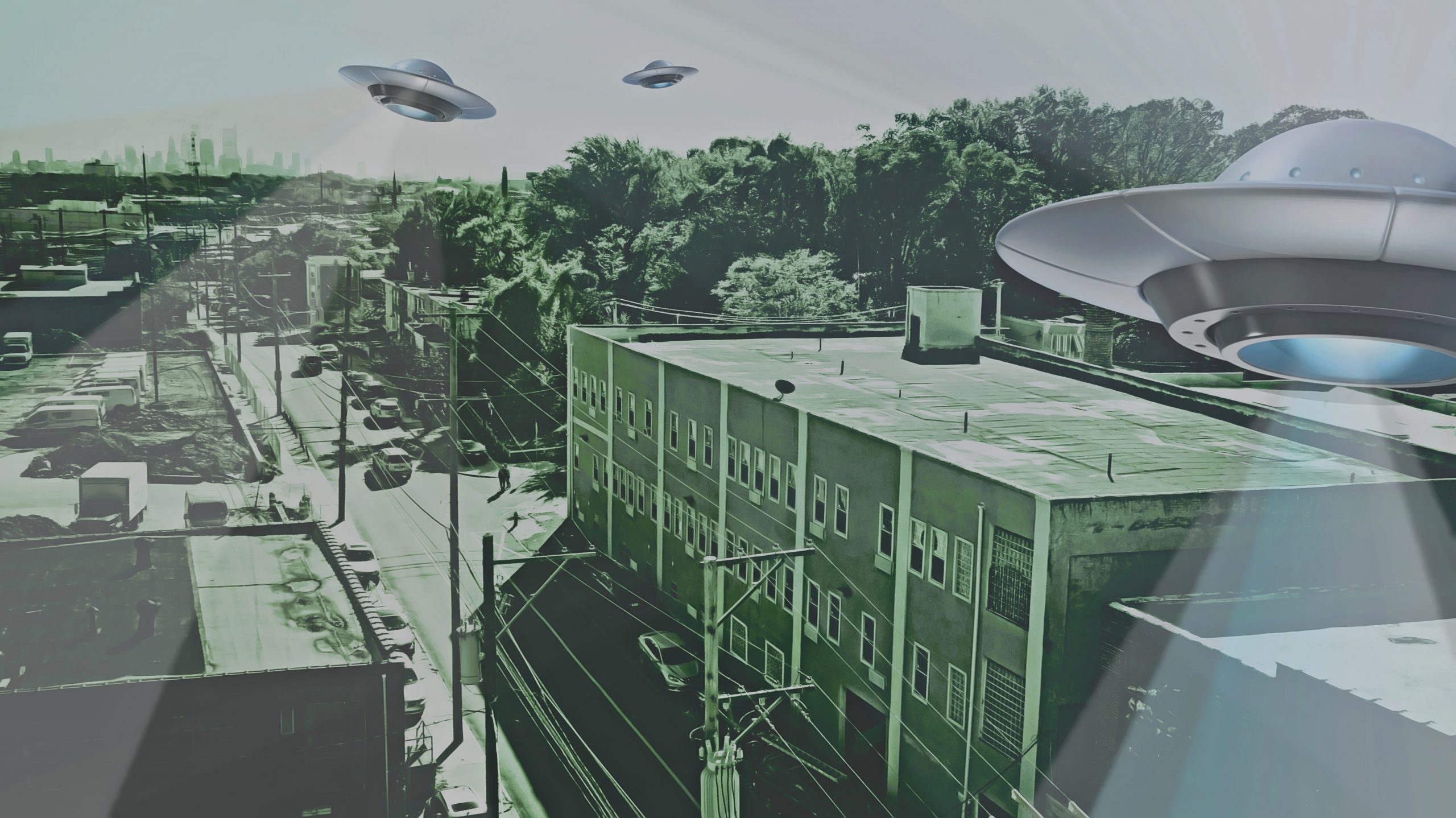 Greetings! We are the Biavians! You would know this if we didn’t keep erasing your memories. This is a reminder that In the last week of your 11th month, we Biavians will be descending on East Falls and Germantown – as usual, bypassing Manayunk – to collect human tissue, fecal and reproductive samples in our on-going research as per our agreements with your leaders, Ms. Geeyoo and Mr. E. Effzee.

Residents are encouraged to be cooperative and forthcoming with biological facts and personal history. Volunteers for additional human-Biavian studies will be selected on an as-needed basis. Report any lingering memories to your local Council immediately.  Thank you for your cooperation.  – Commander Zargot Chula, Biaviian Signal Corp.

Stay vigilant! Report sightings and suspicions to editor@nwlocalpaper.com. And have a happy Halloween!

About The Local 112 Articles
The Local byline reflects community-created content (usually from social media, often from audio/video sources) that we've collected and edited into an article for our website/newspaper.

We’re called “East Falls” — but where are the waterfalls? Joseph Minardi explains our piscine origins, when the Schuylkill river roared with rapids (and delicious protein). [more…]