For the first time in US history, a highly explosive methane gas may be shipped by rail, in 30,000 gallon tanker cars, just across the river from East Falls, Manayunk and Roxborough and through neighborhoods in North Philadelphia. This liquefied natural gas (LNG) project has progressed despite objections of safety experts. Various permits for this project were approved by the Trump administration, the Pipeline and Hazardous Materials Safety Administration, and the Delaware River Basin Commission, which includes the Democratic governors of New Jersey and Pennsylvania.

Until recently, shipping LNG by rail in bulk was considered by government agencies to be too dangerous. But in 2019, the federal Pipeline and Hazardous Materials Safety Administration issued a special permit to allow rail transport of LNG in tank cars between Wyalusing in Northeast PA and Gibbstown, NJ (just across the river from the Philadelphia International Airport).

Over-land transportation of natural gas from shale regions to marine terminals involves compressing the gas to a liquid, at 1/600th of its volume. For comparison, air in car tires is compressed at 1/35th of its volume. The resulting liquid is -260ºF, must be kept cold, and is very volatile. The compression process requires that the gas be compressed continuously in rail cars.

Lehigh County Commissioner Bob Elbich, also a cryogenic engineer with experience as a first responder, described the potential explosive energy of a single rail car as equal to 620 tons of TNT. An explosion involving hundreds of rail cars could be many times more destructive than the atomic bomb dropped on Hiroshima.

If an accident involving these LNG rail cars were to occur, first responders would likely consult the Emergency Response Guidebook. For LNG tanker car accidents, the guidebook specifies that the surrounding area be evacuated; a half-mile radius for a spill, a mile for a fire. In East Falls, the half-mile radius runs approximately from the river up to Gypsy Lane, Conrad Street, or St. James the Less. A mile radius is approximately from the river to Fox Street. Within Philadelphia, approximately 218,000 people live within a mile of the planned rail route.

For a massive fire, first responders are advised to let the fire burn. 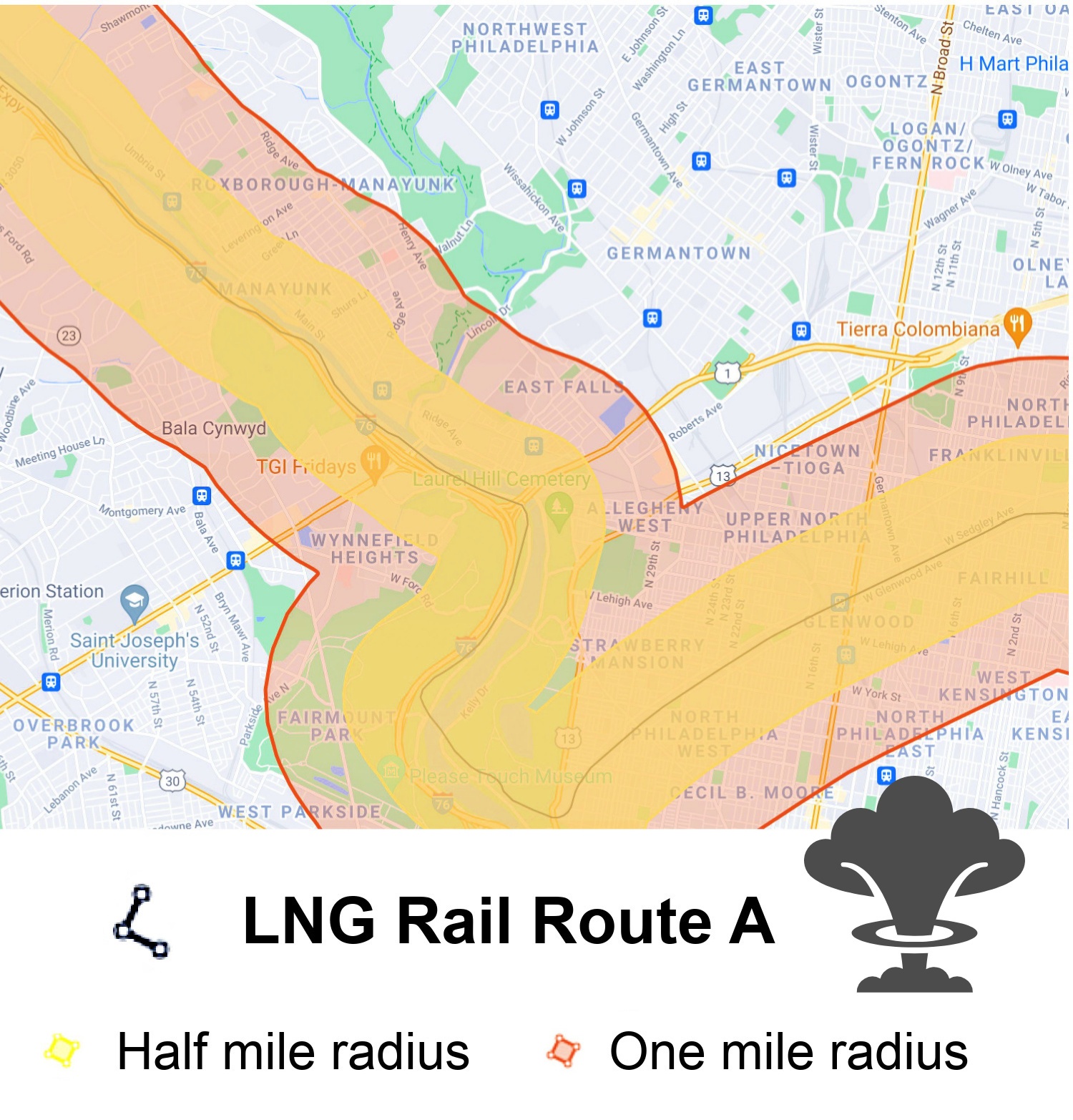 For an example of what could result from an accident, we can look at the aftermath of a spill of 6,300 cubic meters of LNG in Cleveland in 1944. This incident killed 130, injured 225, destroyed 79 houses, and caused explosions and fires with temperatures reaching 3,000ºF. A 1978 report to Congress includes this account of the accident:

“First vapor and liquid came from the south side of the cylindrical tank. Then it collapsed. There was a ‘whoosh,’ a dull red glow, and a slight earth shock. The vapor clouds spread in all directions, some hugging the ground while others rose above it. The clouds suddenly ignited with orange-yellow flashes. Then a great rush of flames generated waves of heat powerful enough to blister buildings half a mile away. […] The liquid moved down East 62nd Street where some entered the storm sewer, vaporized, and exploded.”

A 2020 Congressional Research Service report outlines the safety hazards of transporting LNG. A leak could generate flammable vapor clouds that can ignite at the site of the leak or drift with the wind and ignite elsewhere; resulting fires can spread further as liquid fuel flows and gases evaporate. A “boiling liquid expanding vapor explosion,” happens when liquidized gas boils inside a tanker, vaporizes, and the increased pressure rips a hole in the tanker, resulting in a massive fireball. Last, LNG vapor clouds could cause asphyxiation as they displace breathable air.

In April 2019, then-President Trump issued an executive order directing Secretary of Transportation Elaine Chao to propose a rule change to allow the transport of LNG by rail nationwide. Months later, the Pipeline and Hazardous Materials Safety Administration, under administrator Howard Elliott, followed her directive and issued the proposal.

Firefighters, government agencies, members of Congress, and environment organizations wrote in opposition. The International Association of Fire Fighters wrote “firefighters call on Federal officials to place the safety of the public ahead of any political pressures to reduce the burdens of regulations.” The National Association of State Fire Marshals wrote of loopholes in the proposal that could jeopardize lives. The National Transportation Safety Board wrote “it would be detrimental to public safety if PHMSA were to authorize the transportation of LNG by rail.”

Despite this opposition, and fully aware of the risks to the public, the agency ultimately ruled to allow the transport of LNG by rail nationwide — to the delight of industry groups and some politicians (evidently on the dole). Several environmental groups, including the Delaware Riverkeeper Network, Earthjustice, Center for Biological Diversity, Mountain Watershed Association, Sierra Club, Clean Air Council, and the Environmental Confederation of Southwest Florida filed a lawsuit challenging the ruling, as have 15 state attorneys general including Pennsylvania’s Josh Shapiro. A petition by the Philly Stop LNG by Rail Network asks President Biden to pull back the federal rule and reinstate the ban on LNG transport by rail tank car.

The second component of Fortress Investment Group’s plan to sell domestic natural gas abroad is a pier on the Delaware River in Gibbstown, NJ about 15 minutes from Philadelphia. In June 2019, members of the Delaware River Basin Commission voted unanimously to approve plans to build the pier. Members of the commission include Governors Phil Murphy, Tom Wolf, Andrew Cuomo, and John Carney and Major General Jeffrey L. Milhorn of the US Army Corps of Engineers.

Democratic and Republican politicians were provided with ample government research clearly explaining the history and risks of transporting LNG, and yet they still approved Fortress Investment Group’s project to transport LNG by rail through communities in Pennsylvania and New Jersey. The proposed rail route goes through the heart of two congressional districts in Philadelphia, yet there is no information on the official websites of Representatives Evans or Boyle.

A single permit allowing transportation of LNG by rail expires November 30, 2021, but other permits remain and LNG facilities are still being planned. Without concrete action by Congress and the Biden Administration, LNG tanker cars could be slinking down the Schuylkill River, near densely populated neighborhoods of North and Northwest Philadelphia in the near future.

LEARN MORE! Click the links in this article for deeper dives into this important issue.

SPREAD THE WORD! Please add your comments below and let others know about this clear and present danger. Big thanks for citizen activism!

About Nat Lownes 1 Article
Nat Lownes is a freelance writer, engineer and organizer living in Northwest Philly. He's on Twitter at @nat_lownes

This Land is Our Land