Northwest Philadelphia is somewhat notable for having no freeways at all running through it. However — much like drivers to on Roosevelt Boulevard in the Northeast — drivers living here treat some streets as though they were.

Lincoln Drive and Henry Avenue especially, but even streets like Germantown, Ridge and Wissahickon avenues, have intersections where pedestrians are more likely to get whacked by cars driving too fast. This past summer, for instance, two individuals were killed in hit-and-run accidents at Germantown Avenue and Coulter Street, both of which were caused by drivers speeding through the intersection.

This has led activists in three neighborhoods —Germantown, Mt. Airy and Roxborough — to band together in a coalition aimed at developing long-term solutions to the problem of excessive speed. And while the Northwest Traffic Safety Task Force works on that, a constituent group, the Germantown Traffic Safety Coalition, is working on short-term actions.

“There’s an uptick in vehicular crashes nationwide,” says Sharieff Ali, a Germantown resident and community activist who co-founded and co-chairs the coalition along with Wissahickon resident Suzanne Hanger (and also co-chairs the task force).

Ali also says that national studies have identified two major contributors to the rise. “One is distracted driving. But the speed is what’s killing people. “When you’re hit at 30 miles an hour,  your likelihood of survival is high. But it keeps dropping. At 40, it’s low. And at 60 or 70 miles an hour, if you get hit, you will die.” 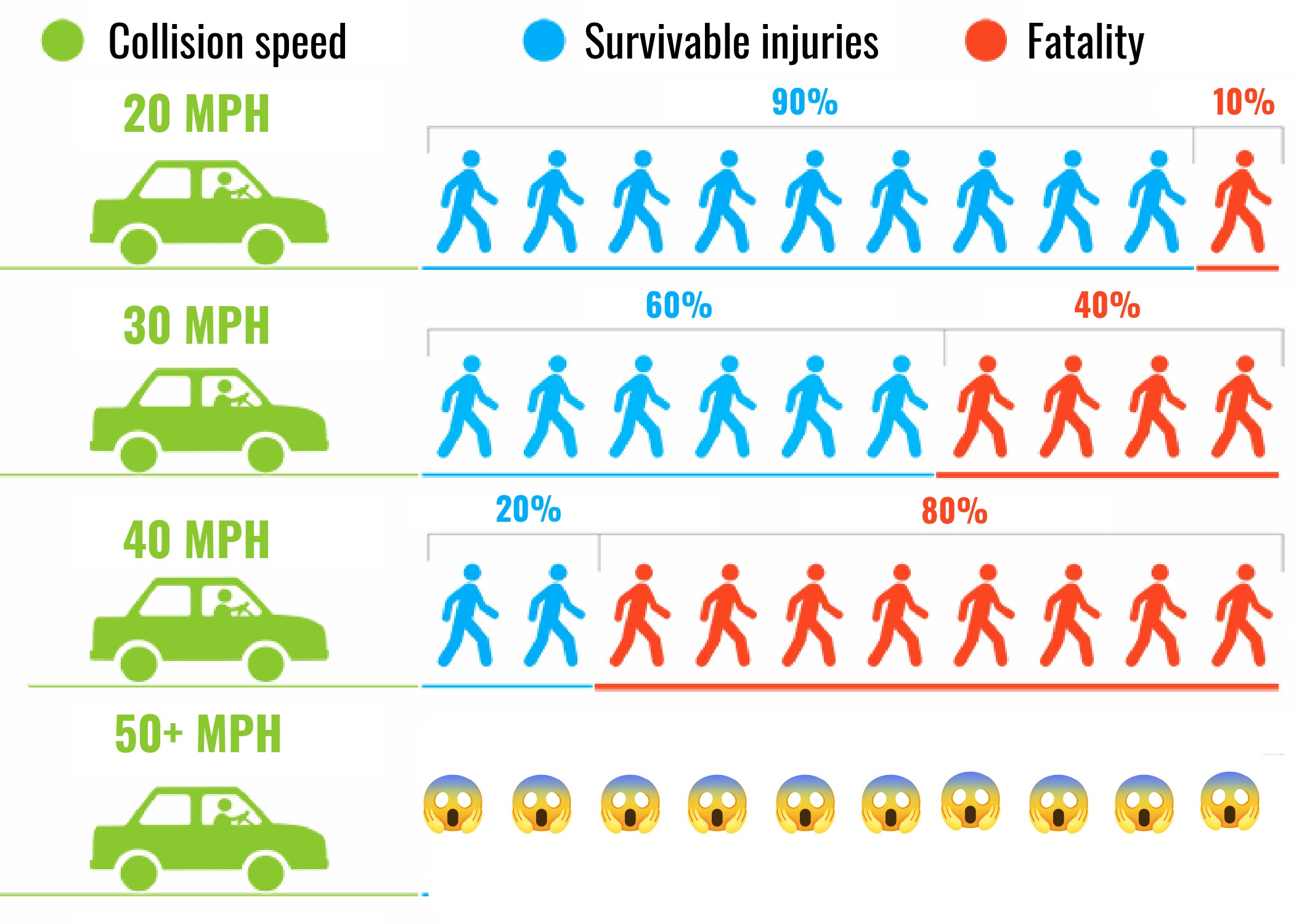 The seriously cracked windshield on the Tesla whose driver killed Dia Lee at Germantown and Coulter on June 20 suggests that driver Quadera Parrish, who later turned herself in to police, was going a good bit faster than 40 mph the evening she struck Lee.

Residents of streets all over the city, including some in Germantown, Mt. Airy and Roxborough, have succeeded in getting devices like speed humps and speed tables installed in order to force drivers to slow down, a tactic known as “traffic calming.” But, says Ali, getting such devices placed is not a quick and easy process.

PennDOT won’t do anything before a full investigation. They bring in the actual data, and they do studies, and they extrapolate the results of the studies and present them to the community in a series of pubic meetings. Based on those results, PennDOT then recommends traffic calming devices. This obviously takes time, and it doesn’t always get the neighbors the specific safety measures they are asking for.

And that’s why the Germantown Traffic Safety Coalition decided to use persuasion as a traffic calming tool first. Their chief persuasion tool right now is the “Slow Down Germantown” signs you see on the front lawns of houses that line neighborhood thoroughfares. “The message is communicated through a picture,” says Ali. In this case, it’s a graphic showing a speedometer with its arrow near the left, or low, end of the scale, combined with a graphic of a car. The brightly-colored signs produced by the Coalition appear on streets in Roxborough and Wissahickon in addition to Germantown. 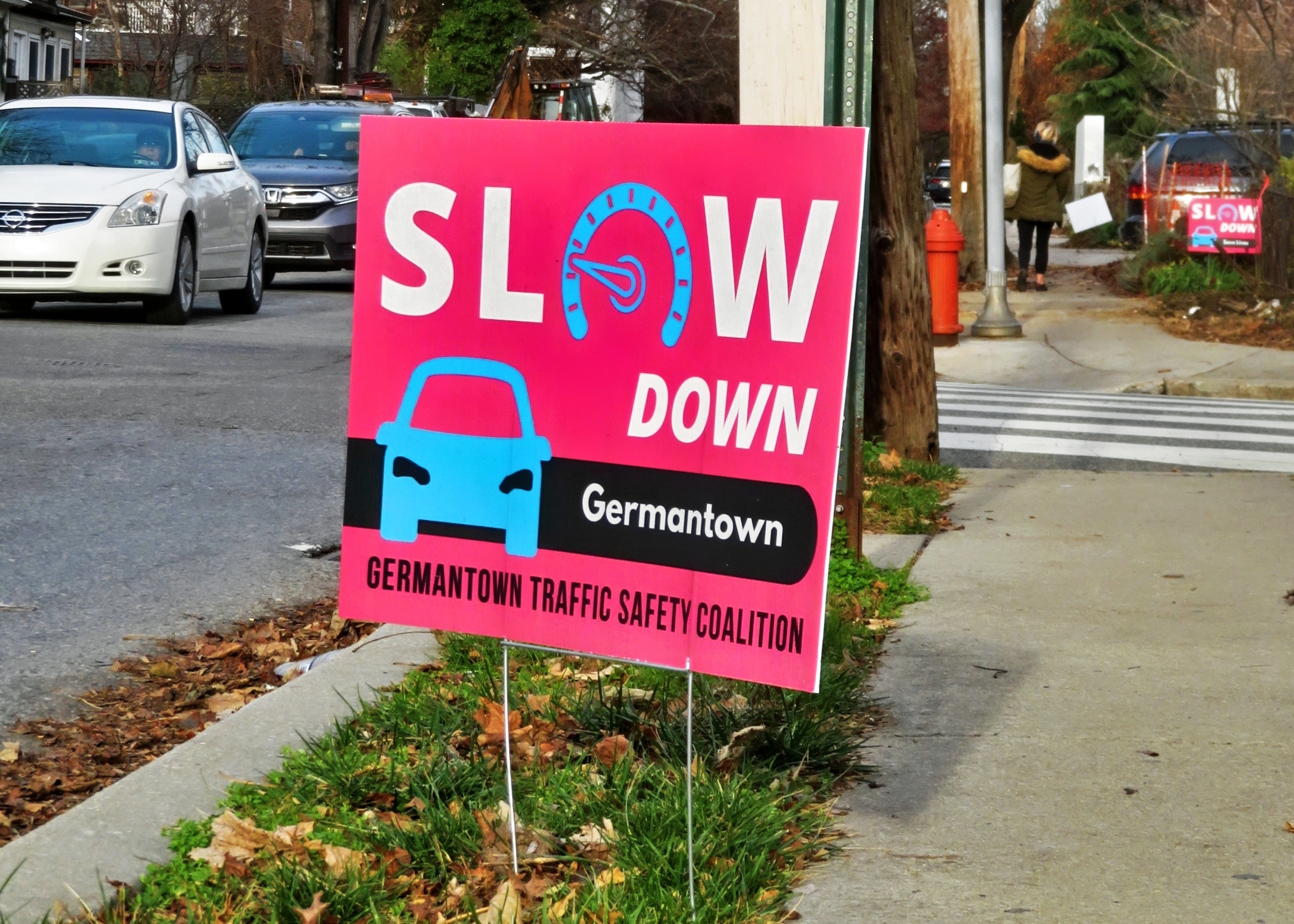 However, both the coalition and the task force hope that one other device can be put to work sooner: speed cameras. Roosevelt Boulevard in the Northeast has had such cameras along it for a little more than two years now. And they have reduced incidents of speeding. “The pilot program started on Roosevelt Boulevard in 2020. The first year, there were 2,200 tickets. Second year, 200 tickets. The behavior change was highly effective,” says Ali.

Legislation now working its way through the General Assembly would extend the pilot project on the Boulevard, but Ali says it should do more. He says that the city has identified five other corridors where speed cameras should be installed; odds are that Lincoln Drive is one of the five, and Henry Avenue might also be one.

In late September, the task force met with State Rep. Darisha Parker, a representative of State Rep. Steven Kinsey, and officials from the Streets and Police departments, PennDOT and SEPTA to press their case for more active measures to reduce speeding and improve traffic safety for all who use the streets of Northwest Philadelphia.

The message the Germantown Traffic Safety Coalition is sending drivers in the area is simple. But it’s only the first mile in a longer drive to reduce crashes and pedestrian deaths in Northwest Philadelphia.

GET INVOLVED: Follow the Northwest Traffic Calming Committee on Facebook for more information and ongoing efforts to promote safer streets in our communities.

About Sandy Smith 14 Articles
Sandy’s interest in journalism stretches all the way back to high school, and he’s been scribbling away ever since then, either in the field or in its hired-gun cousin, media relations. He currently runs the Real Estate & Home channel at Philadelphia magazine's website, phillymag.com. You'll find his column on trends in real estate and design in the print edition. Cities and the built environment float his boat, as does rail transportation, and he’s written about all of the above for Philadelphia-area media and beyond. His work has also appeared in Next City, The Philadelphia Inquirer, Hidden City Daily and several other regional publications. Sandy is a Kansas City native who currently lives in West Germantown. Follow Sandy on nwlocalpaper.com and social media -- Twitter: @MarketStEl Facebook: WriterSandySmith

The FYI on the new REAL ID [more…]

In Fraud We Trust

Ex-director of Germantown Special Services District Indicted by Feds. Will she be the only one? [more…]