So its only a matter of time before the 5-story apartment building comes to fruition on the former site of Chuck’s Garage at 3515 Midvale: 36 rental units, by-right, ie no requirement for community input. Also, since its zoned CMX 2.5, there’s also no parking requirement, either. As you might imagine, local residents aren’t thrilled about this project.

But it’s a tricky spot. As a former gas station built on top of an underground creek, this land is unsuitable for traditional foundations where below-level parking options could be feasible. Plus, it backs up to a steep incline which can’t be dug out too much because there’s a row of houses at the top, facing Calumet.

Which brings us to owner/developer David Ross’s novel solution, which he presented to the East Falls community via ZOOM at August’s public zoning meeting. Here’s his idea:

He’s in the process of purchasing 3574 – 3568 Calumet Street, which is one house and three empty, connected parcels that kinda butt up against the Chuck’s Garage property. The house will be renovated for sale, and then the other three parcels will be graded to provide dedicated parking for residents in the Midvale building. 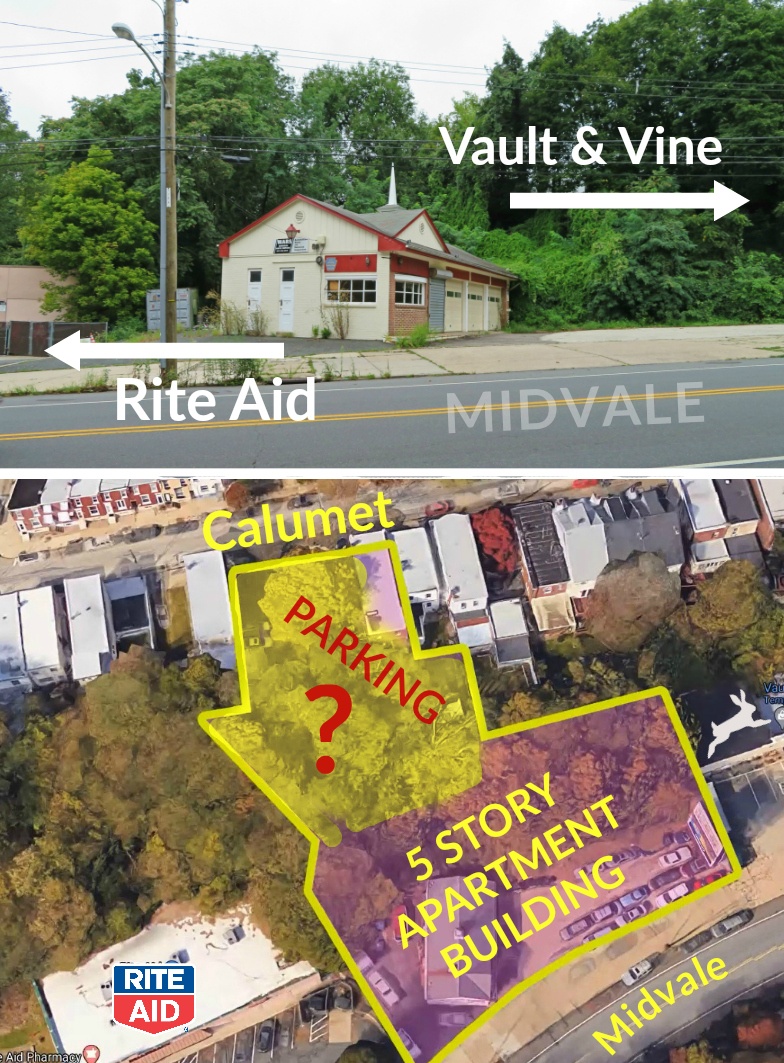 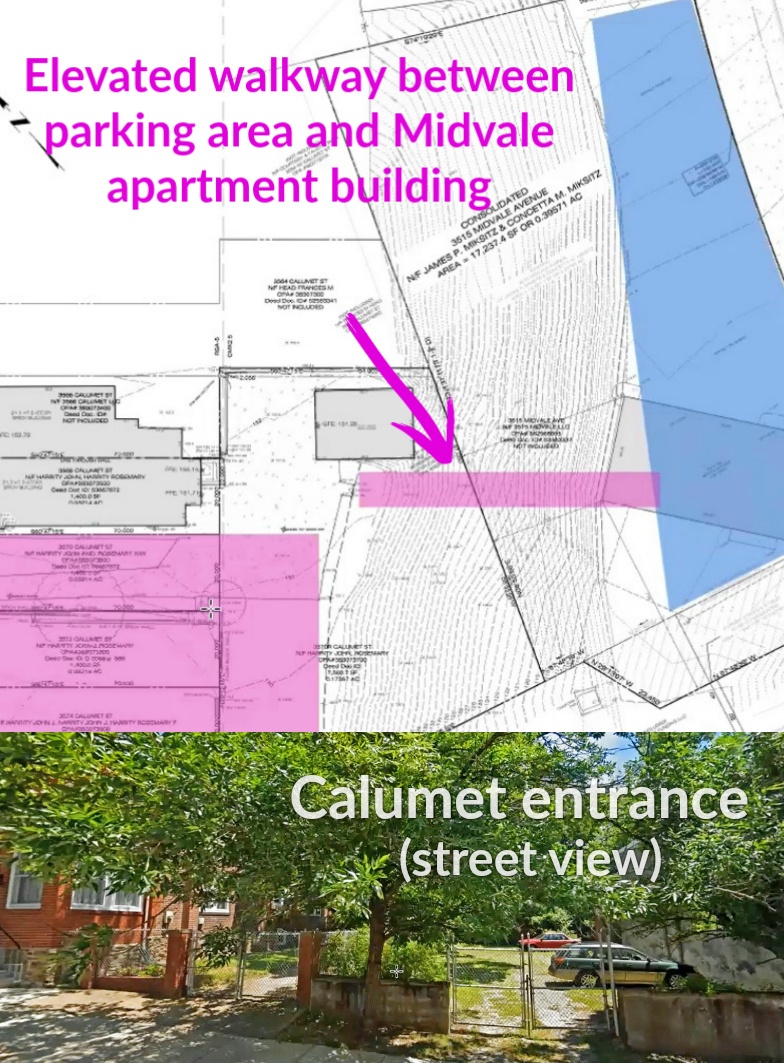 So they’d access the lot via Calumet, then cross over an elevated deck to the top of the Midvale building, from where they’d walk down to their unit. This works out well the way the properties are oriented – Calumet is way up the hill and practically level with the Midvale structure’s roof. He figures there’s room for 20 – 22 parking spaces to fit here.

To do this, he’ll need to ask the City for a variance, which means he’ll be seeking community approval. He anticipates closing on the Calumet property at the end of September, and then he’d hope to work out his zoning asap. If neighbors are against his parking plan, he will still go ahead with the Midvale construction and then probably build “townhomes or something” on the Calumet lots.

Spoiler Alert: near neighbors were not loving this plan. Calumet is already fraught with traffic and parking issues. This particular block is a “yield street,” which means cars come both ways even though there’s just room for one car at a time to pass through. Although this traffic pattern feels like a big hassle, it actually makes the street safer, because drivers need to negotiate their way extra carefully. At least, they’re supposed to.

To hear some Calumet neighbors tell it, though, this stretch is plagued by constant reckless speeders “at all times of the day.” Residents described “constant standoffs,” where drivers “battle it out” for passage. An exaggeration? Maybe – but a homeowner made a good point: Why is Calumet bearing the parking/traffic brunt for Midvale’s development? Calumet is a small residential street, whereas Midvale is a commercial and commuter corridor.

But then, where else will the Midvale tenants park, if they don’t get this designated lot? They’ll likely be driving around, looking for spots, adding to traffic anyway. Taking up street parking from neighbors who live here. Quite a pickle, either way you look at it. Let us know what you think in the comments, and follow us for updates on the next public meeting.

Meanwhile, remediation for the Chuck’s Garage site should be finished up this fall, aiming to break ground on construction as soon as spring 2021. Whether you’re for or against more density in the Falls, there’s one bonus for this project we can all probably get behind:  at least that ugly billboard’s coming down!

AND MORE: August’s meeting also featured a presentation about 220 units coming to Scotts Lane, read all about it here.

Brian K  This is a very interesting situation. If the Calumet people don’t want the parking and traffic in their area, the developer goes with no parking which then for his building ends up on Midvale which is the overflow parking area for the homes around the train station which makes their parking situation worse.

Ralph S  It’s an interesting idea, unless you live, drive or park on Calumet.

Paula H  The old Gulf station. Bumper Hinz from East Falls ran it for many years.

Thom H  East Falls used to be a wonderful place to grow up.

We caught up with Pam & Sean campaigning locally this weekend in our neighborhood where loyalty for both sides runs deep.  For those rare folks here still undecided, we asked both candidates to share five [more…]