Out with townhomes, in with apartment buildings on this long-vacant lot in East Falls. 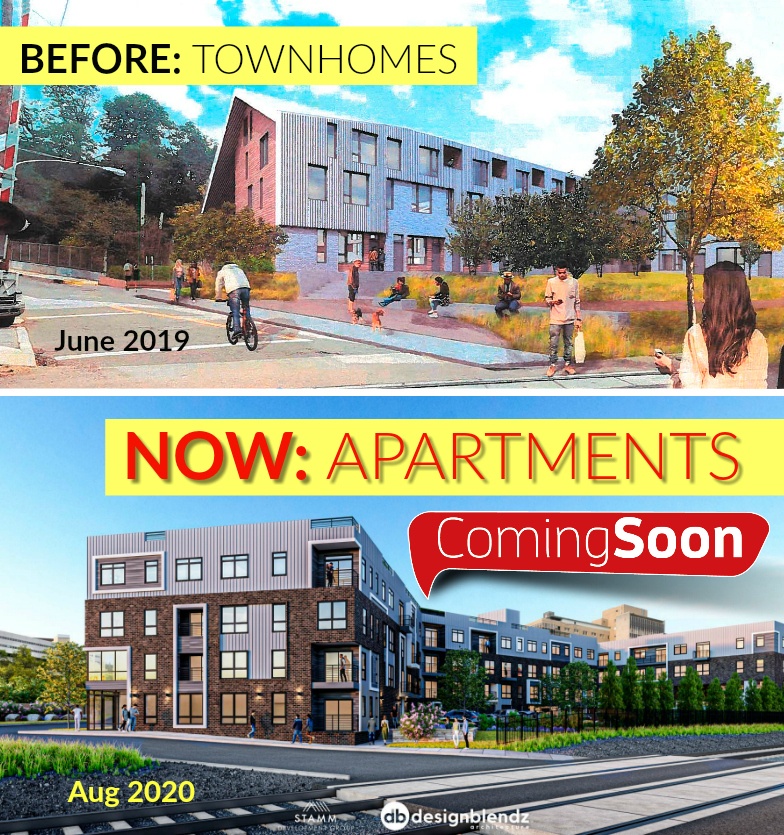 In June of 2019, plans were set to go for 92 townhomes in that big parking lot off Scotts Lane, by the railroad tracks. Duplexes, Triplexes and Single Family units from the high $200’s to the low $500’s. 144 parking spots.

Doesn’t matter. The construction is by-right, which means the development is within zoning guidelines and does not require any community input to move forward. However, plans on this large scale require approval from Philly’s “Civic Design Review,” a time-consuming ordeal that many experts agree is quite pointless, since any recommendations are purely optional.

Still. Part of that process is presenting to the community, so let’s hear what they’ve got! Here’s the gist from Stamm Development Group and Design Blendz Architecture, who met with East Falls and RAH neighbors this August via ZOOM to discuss their plans. Quick summary:

They purchased this land at 3449 Scotts Lane in April 2020. Their goal is to have all their permits by January 2021, and then break ground that spring. From there, they expect the project will take about two years to completion – probably like summer 2023. 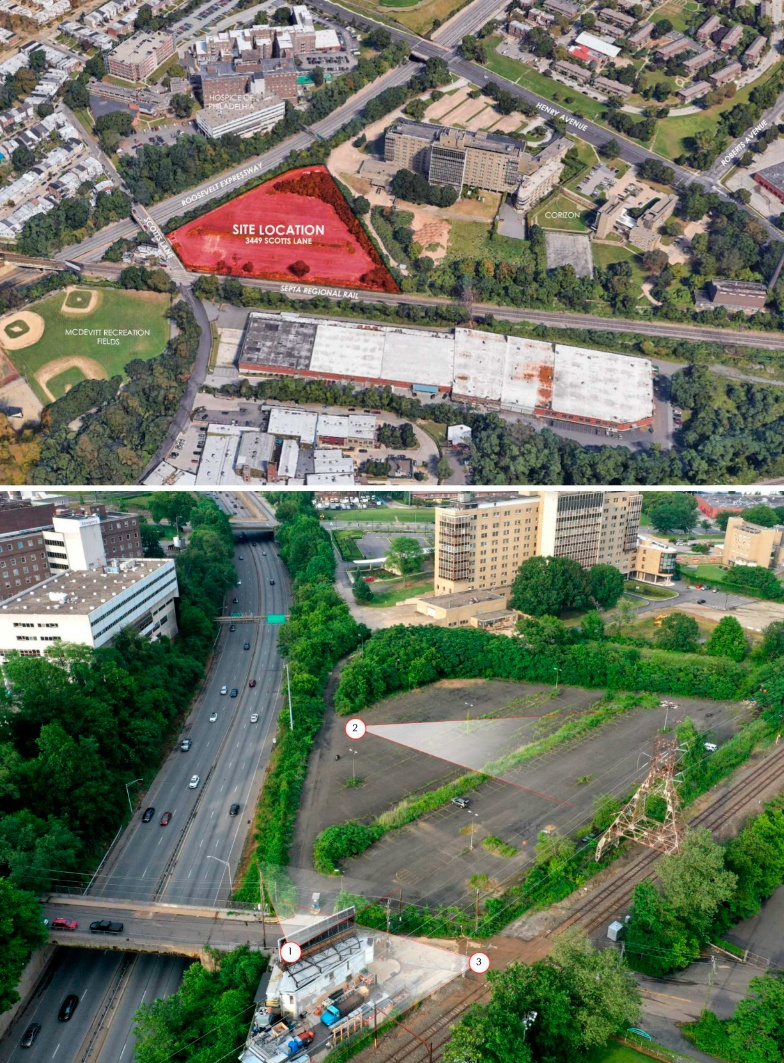 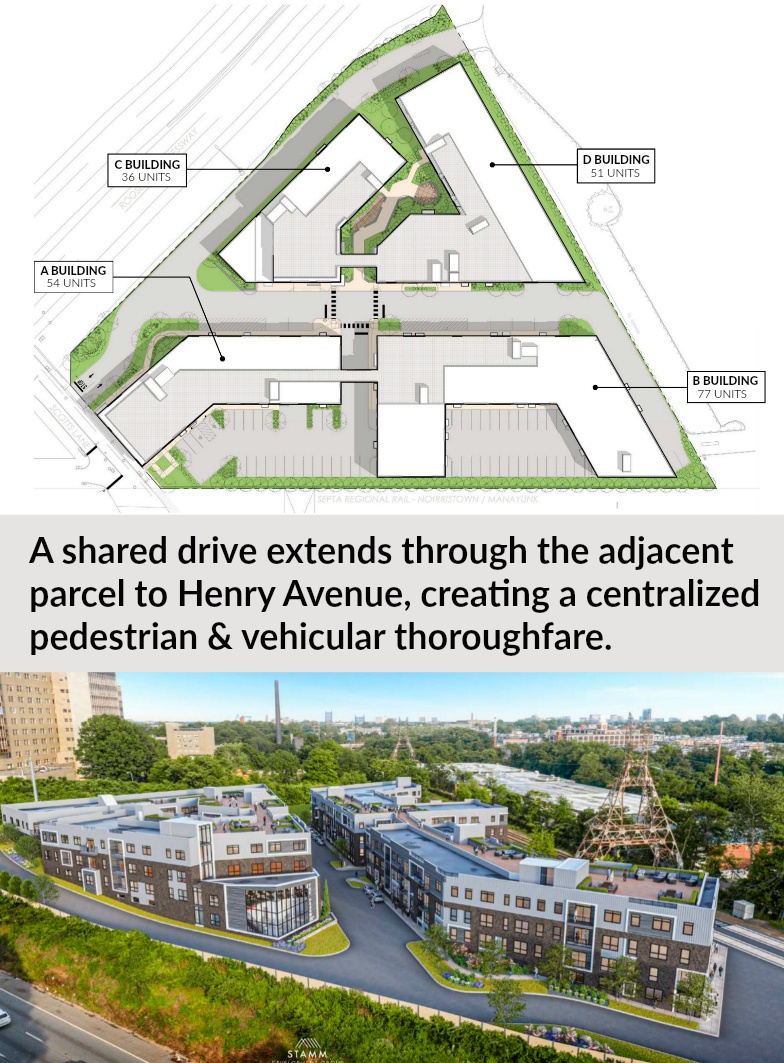 Construction will be in two phases, beginning with the land closest to the railroad tracks. In addition to residences, the design features outdoor spaces, shared amenities and rooftop access. 50% of the units will have a balcony. Access off Scotts Lane and Henry Avenue, at the light in front of NewCourtland Senior Services (with whom they’ll share a private drive).

Speaking of that private drive – EF Community Council zoning chair Todd Baylson pushed back on the developer’s plans to restrict access here.  “The agreement to maintain the thoroughfare I think is very important.” He said NewCourtland paid “a high six figures” to move that light, presumably assuring EFCC in closed meetings that neighbors could use the driveway.  “My recollection and my hope is that it is available to people in & around East Falls,” Todd said, “That it will not be gated or unable to be accessed by people, and that it’ll help minimize traffic.”

Will it though? Other neighbors ZOOMing in were concerned such a thoroughfare could be an attractive way to by-pass Henry traffic and speed through the neighborhood to Ridge and Kelly Drive.  Todd pushed back. “If locals know about it but the TNC’s don’t, people would be fine with that, too.”

Apparently, some residents on Scotts Lane feel the road has been getting too much traffic from “Transportation Network Companies” like Uber & Lyft so EFCC’s plan seems to be for near neighbors to use the new development’s driveways as their own secret shortcut…?

The development team didn’t really have an answer for Todd, except to assure everyone that a traffic study had been done on the area, which concluded the 220 new units would produce no significant impact – adding just a little over one car per minute during peak hours. And their data shows 36% will use public transportation but, still, these are just predictions there are no guarantees.

Q: Who is the target demo for renters?
A:  Working class, 30 – 55 years old, likely couples where one works downtown and the other in the suburbs.

Q: Will the company who manages the property have an on-site presence?
A:  Yes there will be a leasing office plus security and maintenance.

Q: Any plans for commercial here?
A: Nope, they’re zoned for residential only.

Q: Will neighbors have access to any amenities such as conference rooms and gathering spaces?
A: Nope, they’re for residents only.

Q: Will parking spots be designated?
A: Yes, tenants will have assigned spaces.

Q: Where is the loading area for moving vans & delivery vehicles?
A: Plans call for two loading zones accessed off Scotts Lane.

Q: What’s the plan for stormwater runoff?
A: They will take care of 100% of it with underground basins to catch and filter it before releasing gradually down Scotts Lane.

Q: Are you just going to flip the property?
A: No, we’re a NW Philly developer, committed to building this project.

Q: How did the zoning switch from RSA5 to RM1 in 2018 without a community vote?
A: Trick Question: no one asked this at the meeting, but it’s still a puzzler.

As the meeting ended, Todd told attendees that EFCC would be meeting privately with the developers and amongst themselves to provide feedback for the CDR meeting, which will likely be held via ZOOM in early October. Again, whether the community approves or disapproves this project is inconsequential, but the good news is, these builders are local and invited community members to contact them directly with any questions or concerns via info@stammdevelopment.com.

VIEW THE PLANS and use the comments field below to share your thoughts.

AND MORE:  August’s meeting also featured a presentation about an innovative parking solution to a tricky piece of real estate being developed for mixed commercial/residential units on Midvale, read all about it here.

One of Philly’s top private real estate development firms, they also manage a portfolio of luxury townhomes, multi-family options and mixed-use apartment buildings in many diverse neighborhoods including Fairmount, Brewerytown, Graduate Hospital, Fishtown, Chestnut Hill, and more. View pics and info of completed and planned projects on their website: stammdevelopment.com.

Eric C  No!!! My dog and I LOVED that creepy parking lot, and the towering, imposing specter of the former psych hospital looming over us!!!

Brendan H  Awesome, I was just thinking that we need more traffic through the neighborhood.

Matt B  Why am I supposed to be against this again? There’s such a housing shortage I saw there’s a piece of empty land for sale on Ridge under the highway for 175k

Alexandra G  Has the developer ever visited the site? Because I can’t imagine how anyone would think Scotts Lane could work with that many additional cars going in and out all the time. I like how it’s described as “walking distance” to the train station when Scotts is already terrible for pedestrians and will be even worse with the additional traffic.

Matt S  If they are taking inputs, it’d be awesome if they added more green space on the roofs. Perfect potential but glad to see they’re doing a bit with it already.

Sheila L  You’re right Scotts Lane and all in between will be backed up through rush hours.

You didn’t think that smokestack came down for nothing, did you? [more…]