Whatever you remember from the last time you saw Do The Right Thing — it’s time for another viewing.

Just on a visual level alone, the film stuns with new sound and saturation. The original 1989 celluloid has been re-minted frame by frame, then digitally restored and enhanced at Spike Lee’s direction. It was re-released in theaters in 2019 for the movie’s 30th anniversary, and this new 4K Blu-Ray edition is a feast for the eyes.

All the sights and sounds of an inner-city neighborhood in the late 1980’s, so vibrant and authentic it feels like you’re in the middle of the action. Lee’s simple plot is immensely entertaining: a slice of life in a diverse, lively community on the hottest day of the year.

People banter and bicker; at first it’s funny, or is it? Old beefs come to light, tension builds and then – somehow the movie feels even more real. Suddenly it’s like we’re reliving a moment that’s burned into our collective consciousness. And then another one, and another…

Thirty years ago, this film was a warning. Today, it’s a prophesy that’s come to pass. The pain and conflicts are still with us – and even more pressing.

This movie caused a firestorm when first came out  – critics worried such an authentic depiction of Afro-centric reality was like “dynamite under every seat.” I was a sophomore at LaSalle at the time, where campus life was so segregated I don’t recall one conversation about it. When Driving Miss Daisy won Best Picture that year, I totally missed the irony.

Do The Right Thing went on to become one of the most powerful films about race ever made in America. It’s been named to the American Film Institute’s list of the 100 Greatest American Films of All Time and is preserved in the Library of Congress’ National Film Registry for its cultural and historical significance. Lee’s masterpiece is achingly relevant to the current cultural moment, filled with discussions of gentrification, police brutality, racial stereotyping, and white supremacy.

There’s also beautiful cinematography. A swooning jazzy score. Brilliant performances: Rosie Perez, Martin Lawrence, Samuel L. Jackson, John Turturro, just to name a few. Some of the funniest smackdowns ever written – which is one of the pleasures of Do The Right Thing, how it swings between comedy and tragedy, before finally landing… where? The movie doesn’t provide any answers.

Three decades later, we’re still grappling with Lee’s film and the searing images it recreates for us, seemingly – shockingly —  pulled from recent newsfeeds. Nobody has ever made a better movie about race in America. See it again. Celebrate its artistry. Mourn its relevancy, Fight the Power.

Please join your neighbors at Historic Germantown for a free showing of this monumental movie followed by a guided discussion with community partners and local media. Free pizza dinner plus information, resources and opportunities to talk things out and voice your opinions in a variety of ways. All welcome for a night of classic cinema and honest conversation. 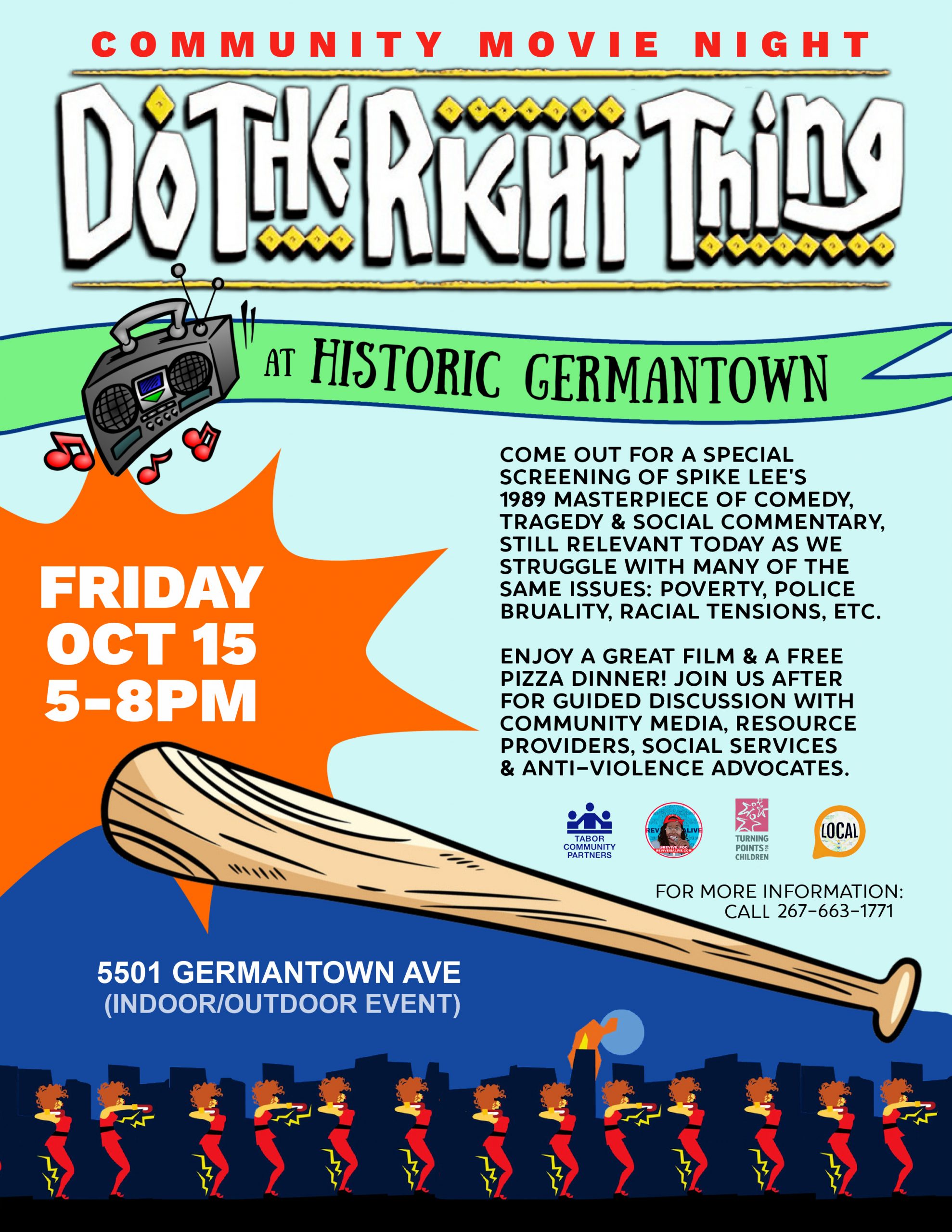 Tabor Community Partners
Child welfare and behavioral health outreach with a focus on families as the foundation of our communities. TCP promotes networking, cooperation and sharing resources to benefit all. 57 East Armat Street 19144, 215-842-4800 taborservicesinc.org

Turning Points for Children
Responsible for the safety, well-being, and permanency of over 5,000 children and their families throughout the Lower Northeast, West, North Philadelphia and Southwest Philadelphia turningpointsforchildren.phmc.org

WHYY/Revive Media’s P.O.C.
Tamara Russell aka Proof of Consciousness, or “P.O.C.” to her audience of 15,000+ unique listeners who follow her online and thru her broadcasts (including WHYY’s popular “Mad or Nah” feature).  A partner in WHYY’s innovative “News & Information Community Exhange” program, REVIVE reports with an emphasis on Millennial viewpoints centered in African-American culture. Reviveisalive.com

(And your friendly neighborhood news team here at The Local!)

The Heat Is On