The arrival of September can signal only one thing: the beginning of yet another school year for school children all over Philadelphia and the country.

For those at Martin Luther King High School located at 6100 Stenton Avenue, the coming year will be a particularly important one as 50 years ago next year, a groundbreaking ceremony was held on the property which would be developed with the High School. 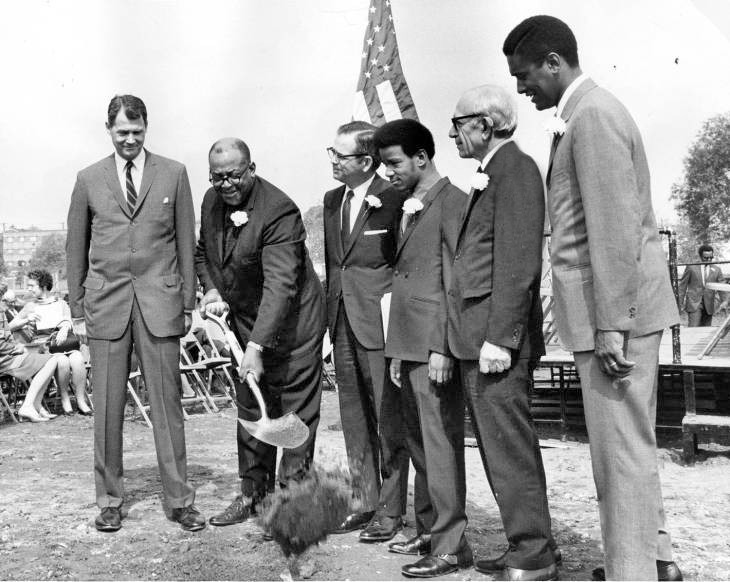 The photograph taken on May 21, 1970 (by Helen Bauhauf of 352 Church Lane, Germantown), shows the groundbreaking ceremony with Reverend Henry H. Nichols, Vice President of the Philadelphia Board of Education, digging the first shovelful of earth.

Once completed, the proposed school would appear as shown in the diagram, drafted by John Carl Warnecke and Associates, and the George M. Ewing Company. The architects designed the facility to accommodate up to 4,000 students with space for an extensive music and arts program; vocational-technical training, including an auto repair shop; varied physical education and sports programs; and a wide range of academic disciplines.

MLK High graduated its first class in 1977 and some of its notable alumni include rappers Eve, and Mega Ran; others include professional basketball player Stefon Jackson, and Grammy award winner Ready Rock C.

About the Time Machine

Historic Germantown (HG) is a partnership of 18 historic houses, destinations, and museums that have joined together to protect, preserve, and share some of the area’s prized cultural assets.

HG manages the Germantown Historical Society archives and a collection of over 50,000 items; for more information, visit Germantownhistory.org or Freedomsbackyard.com. Located at 5501 Germantown Ave.

About Alex Bartlett 25 Articles
Librarian and archivist Alex Bartlett combines his hobbies with his career. Working for the Germantown historical society, Bartlett manages the libraries’ collection and archives, while also helping to provide visitors with requested research documents. Alex is a self-described “history nerd,” with interests in archeology and old bottles and glassware. He said that growing up in Germantown is what initially stimulated his enthusiasm toward historical documents and objects, and his job manages to integrate all of his interests into one field.

Keeping Your Cool (When It’s Hot)

Beat the coming heat with these expert tips and affordable a/c options.  [more…]