PHILADELPHIA – on May 1, 2022, Multiple groups of labor, immigration, and other social justice activist gathered at various points in Center City before meeting up at Independence Mall and marching down South street to Washington Ave for a cultural event. The groups celebrated International Workers Day, sometimes referred to as May Day. They also called for long-promised immigration reform, more substantial labor, social safety net, environmental protection, and criminal justice reform.

This May Day comes as worker organizing makes a resurgence in the US not seen since the ’60s. This resurgence stems from corporate exploitation of frontline workers throughout the pandemic, followed by two years of corporate greed piggybacking on inflationary fears and legitimate supply chain issues that have persisted, all for record corporate profits.

Protesters from the Workers Solidarity Network rallied in front of the African American History Museum, calling for prison abolition, improved labor conditions, housing environmental justice, and releasing all political prisoners. They then marched through the fashion district and down Market to join a larger rally of immigrant and other labor groups at Independence Mall.

Mike Africa Jr. spoke about his parents and what it was like to grow up with them in prison as political prisoners. He talked about Mumia Abu Jamal and the mentorship he’s (Mumia) given to thousands of liberation activists over the past 50 years.

“We’ve gotten some of our people home, and each one of them is a reason to celebrate, but we can’t stop until we bring every last one of them home, especially Mumia,” said Africa.

Cindy Lou spoke about the struggle to save UC Town Homes at 39th and Market. The community known as the Black Bottom has been under attack for nearly a generation. In the ’60s, the city labeled it blighted despite the fact… or perhaps because it was a vibrant black community.

The real estate firm that owns UC Townhomes, Altman Management Company, hasn’t renewed its 40-year lease with HUD that designated it as low-income housing. Sixty-nine families are currently being threatened with eviction.

“This city is already facing a housing crisis, and these people want to throw 69 families on the street,” said Cindy. “No one deserves that; everyone deserves the dignity of safe, affordable housing. These trilobites are taking that away from these folks, many of whom have lived there for a generation.”

At Independence Mall, members of the Movement of Immigrant Leaders in Philadelphia, El Paro Philly, Juntos, and others rallied to call for immigration reform, housing, a living wage, healthcare, and dignity in the workplace. They also celebrated the recent labor wins of the previous year at Amazon, Starbucks, and other shops, noting that they have the momentum to rebuild a strong labor movement in America.

“Poor and low wealth workers across America have realized that they’re being abused by CEOs, Billionaires, and politicians. They are ready to carry forward with Dr. Kings vision of an economy that prioritizes the needs of the poor and working class, the oppressed and repressed over the needs of the rich oppressors,” said Rev. Dr. William Barber, Co-Chair of the Poor People’s Campaign. “The people are rising to build a third reconstruction, they have been marching in their cities organizing, and on June 18th they’re coming to DC but when they go home it will be to the voting booth.”

Before striking off down to South Philly, members of the indigenous troupe Kalpulli Kamaxtle Xiuhcóatl prepared incense. They blessed several individuals and families who had been struggling in recent months.

Protesters then marched together down 6th street to 9th and Washington Streets in South Philly for a cultural event.

The march was led by Indigenous dancers Kalpulli Kamaxtle Xiuhcóatl who blew a traditional conch shell as a call to action and performed various Aztec dances and prayers along the route through South Philly.

Another group from Norristown, Champions Lowriders bicycle club, brought up the rear of the march, which ended on 9th and Washington Streets in South Philly for a cultural event.

Interested in fighting for the poor and working-class (our community)? Take June 18th off and head down to DC!

Click here for more info and to catch a ride there and back! 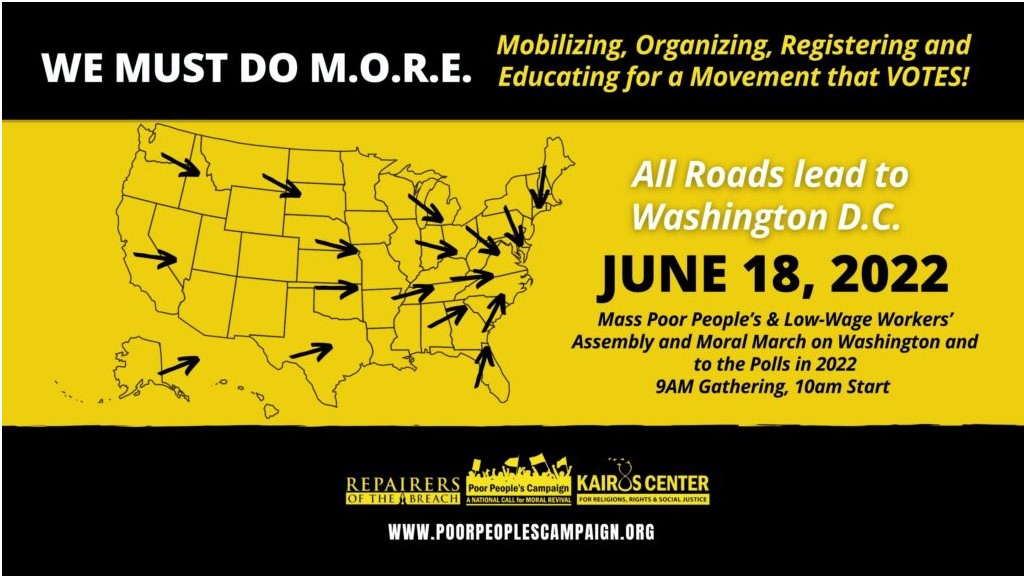 About Cory Clark 32 Articles
Cory Clark is a Photojournalist and writer focused on Human Rights and other social issues. His work can be found in hundreds of media outlets from Philly Magazine to Fortune. He has been a long time freelancer for Getty Images, The Associated Press, and Association French Presse. Cory, his wife, and son are residents of East Germantown.

The Struggle to Protect Women’s Reproductive Rights 48 Years After Roe It’s been 48 years since Roe V. Wade became the law of the land in America, and yet here we are, women are still [more…]

A Christmas Miracle or Betrayal of Unhoused Philadelphians?

Just days before Christmas and days after the unhoused community memorialized 400 of their kindred who died this past year, the Philadelphia Housing Authority (P.H.A.) turned over the first 7 of a promised 59 houses, [more…]